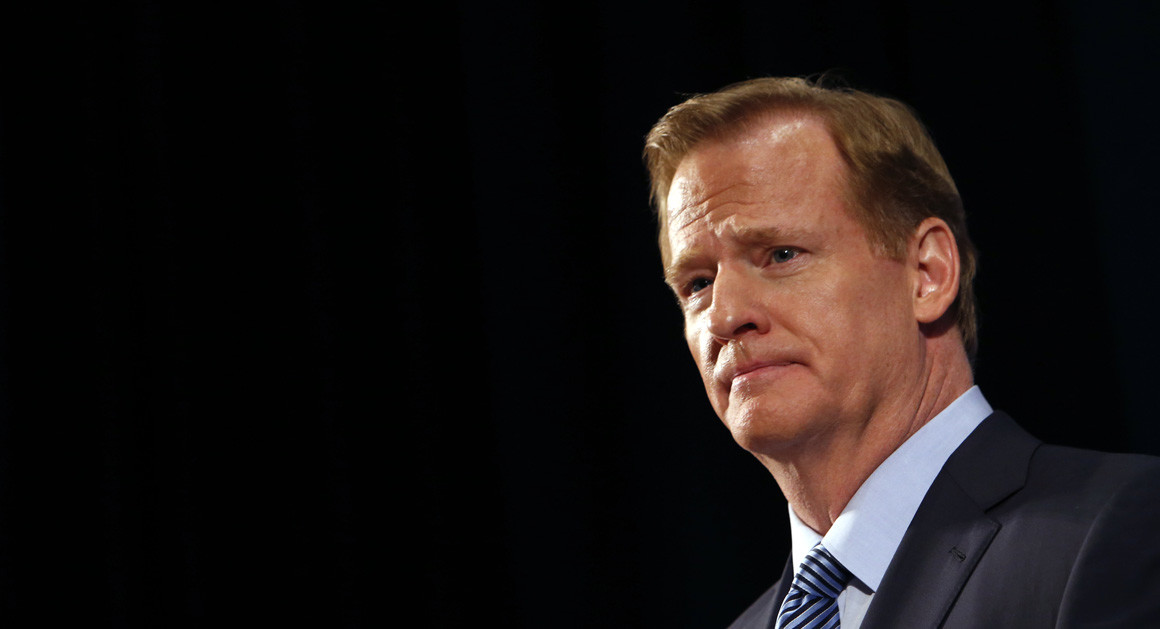 The National Football League (NFL) has a ratings problem. While the perennial television juggernaut’s 9.7% drop from the previous season appears consistent with overarching trends in the marketplace, the discourses surrounding such a precipitous decline for one of America’s most reliable programming staples warrant further investigation. Grappling with public relations crises involving concussion research, domestic violence cases, player protests, and recent scandals concerning the job responsibilities of cheerleaders, the NFL must increasingly demonstrate its value as both a business enterprise and a cultural institution. As a result, league representatives such as Commissioner Roger Goodell must validate the NFL’s performance as a measurable entertainment property while simultaneously defending its honor as a morally just and virtuous operation. The immense scrutiny of the NFL’s perceived ethical position by a complex web of invested parties—including networks, sponsors, carriers, tech companies, partnering organizations, audiences, and even politicians—complicates the industrial logics that attempt to make sense of and account for dwindling viewership.

Sports programming, and especially professional football, has proven relatively immune to the many pitfalls facing the contemporary television industry. As Amanda Lotz contends, “The value of live televised sports has increased because so little other programming continues to unite comparatively large audiences who watch at an appointed time and remain captive through commercials.” [1] The promise of a guaranteed audience congregating for a national television event still resonates for networks and carriers, who have committed a combined $50 billion for the rights to NFL games through the early 2020s. Despite losing 17% of its average per-game audience since 2015, the league still mustered 37 of the 50 most-watched television programs this year, along with the top two highest-rated programs in Sunday and Thursday Night Football and the most-watched cable program of the year in ESPN’s Monday Night Football. 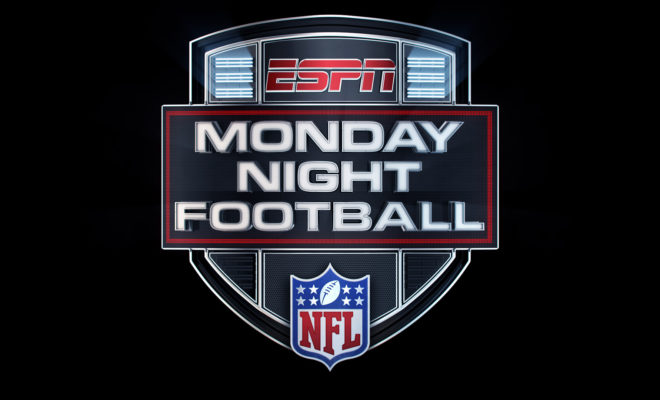 Such sustained dominance remains appealing to advertisers, enabling the NFL to withstand the unrelenting fragmentation of the television audience that has accompanied the rise of mobile technologies and the unprecedented proliferation of content. Yet even the league’s apparently ironclad advertising revenue declined 1.2% this year, the result of an increase in makegoods to sponsors anticipating more eyeballs for their commercials. Most notably, the automotive and electronics industries that historically spend the most on NFL ads cut back their spending in 2017. While the Super Bowl on NBC boasted new records for advertising revenue and the price of NFL commercial space continues to escalate, the anxieties surrounding such a glaring ratings slump have at last seeped into the strategies of once-dependable buyers.

League representative are quick to point out that professional football generates considerable activity and engagement beyond the scope of linear television. For instance, Amazon recently secured the rights to two more years of Thursday Night Football, while a five-year $2 billion partnership between the NFL and Verizon will allow smartphone users to stream games whether they are Verizon customers or not. Combined with the stratospheric popularity of fantasy football and a recent Supreme Court ruling that permits states to legalize sports gambling, the destabilization of the traditional television economy only appears to pose a superficial threat to the NFL’s overall brand. However, Commissioner Goodell’s impulse to justify the league’s ratings performance speaks to the sustained and agreed-upon role of these measurements in connoting both current and future success. When asked about the subject on the ESPN talk show Golic and Wingo, he claimed, “I’ll take our ratings any day… I think anybody in sports would say that.” Goodell has frequently shrugged off the NFL’s ratings slide as indicative of broader developments in media technologies, distribution platforms, and related consumption habits, ultimately reassuring critics of the league’s savviness in navigating those trends.

Many analysts have attributed 2017’s dramatic decrease in viewership to the product on the field, citing the failures of large-market teams (the Dallas Cowboys and New York Giants, e.g.) and the absence of popular athletes due to injuries (Aaron Rodgers) and suspensions (Ezekiel Elliott) as contributing factors. Responding to pictures that appeared to depict sparsely populated stadiums, Goodell noted the transition of multiple franchises to new cities and fanbases, as well as the inevitable dips in attendance that accompany underperforming teams.

Yet, as the quintessence of what Michael Newman has deemed “ethically contested media,” the NFL must negotiate these day-to-day corporate concerns with the ideological tensions that threaten its brand. [2] As Travis Vogan argues, the league’s “immense cultural and economic power is not simply a product of the games it provides… but also its cultural meanings. The sport embodies and articulates characteristics, beliefs, attitudes, and values unique to American history, identity, and everyday life.” [3] Of course, these meanings have proven both dynamic and historically contingent, often illuminating the contested nature of a unified and essential American sensibility that football purportedly represents.

A steady influx of public relations nightmares has challenged the NFL’s vaunted status as a national pastime as well as its presumed invincibility as a ratings powerhouse. For instance, developing research linking tackle football to traumatic brain injuries has revealed the long-term consequences of an organizational culture that emphasizes physical toughness and self-sacrifice no matter the costs. The NFL’s complicity in burying these findings and attempting to discredit those responsible resulted in a $765 million settlement to former players and their families along with a new league mission to demonstrate a commitment to player health and safety. While critics bemoaned the effects of hard-hitting violence on the field, a string of poorly handled domestic violence cases further undermined the NFL’s efforts to flaunt its moral compass. In particular, a mere two-game suspension of Ray Rice proved untenable when video evidence captured the running back punching his girlfriend in the face. The debacle not only instigated a complete overhaul of the league’s Personal Conduct Policy, but also a highly publicized new hire in vice president of social responsibility Anna Isaacson, who was enlisted to implement training and education programs devoted to issues of domestic violence and sexual assault. Observing the NFL’s merchandise, advertising, and charitable initiatives in the context of these brand crises, Victoria Johnson interrogates the relationship between the league’s “cultivation of a broad spectrum of female fans” and the strategic “mitigation of acute public criticism.” [4] With emerging revelations concerning the labor conditions and expectations of NFL cheerleaders, the league must continue to balance such calculated appeals to a desirable demographic with mounting controversies that cast the league’s gestures of goodwill in considerable doubt. 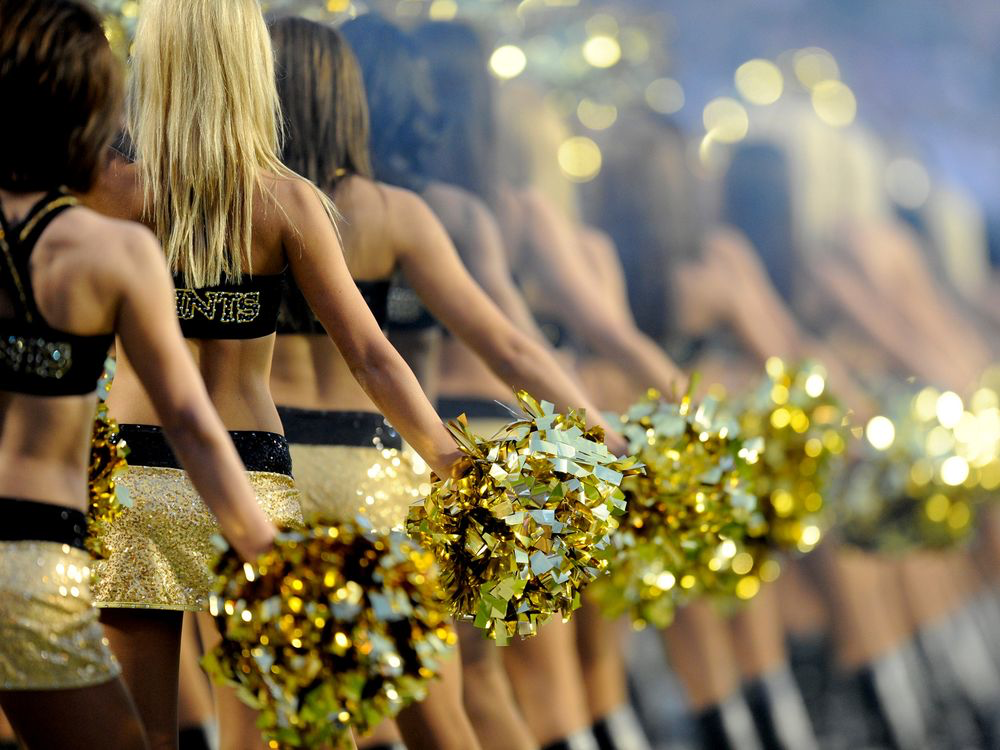 NFL cheerleaders have filed discrimination cases against their teams

In a season of plummeting ratings, no incident generated as much speculation and debate as the player protests during the National Anthem. Initiated by Colin Kaepernick in 2016 to draw attention to police brutality against African Americans and other issues of racial injustice, the demonstrations expanded when President Trump referred to those who took a knee as “sons of bitches” and declared that they should be fired for their alleged disrespect of the flag and country. As with the concussion and domestic violence crises, Goodell expressed a desire to move on from the issue and perform the NFL’s sensitivity in accommodating all afflicted parties. After meetings with the NFL Players Association, the league pledged $89 million over seven years to social justice charities. By directing significant contributions to racial equality initiatives, Goodell temporarily extinguished a potential crisis in the same public-facing manner that rule changes and Heads Up Football did for player safety, and that partnerships with NO MORE and Raliance did for domestic violence. However, recent battles over an official anthem policy for the upcoming season indicate that the NFL’s attempts to appear socially conscious will once again clash with the financial imperatives of appeasing powerful owners, skittish sponsors, and disgruntled fans.

The perception that athlete protests have directly resulted in deteriorating viewership heightens the blurring of corporate and ideological responsibilities for a once-untouchable brand. Especially considering Trump’s willingness to intervene in the future of professional football and the intensified discourses about what it should represent for the nation, the NFL’s delicate balancing act has proven increasingly difficult to maintain. Ruminating the league’s conspicuous ratings tumble, Goodell mused, “It’s something that I don’t think there’s a single reason for. Everyone’s got theories.” The fact that everyone has theories about what exactly is plaguing such a ubiquitous media property and resilient cultural institution speaks to the evolving anxieties surrounding contemporary media markets as well as the cultural tensions pervading a highly contested sociopolitical moment. The strategies deployed by an organization still heavily invested in creating media events for a national audience necessitate further examination, especially when that audience proves divided not only in terms of fan loyalties, but also in their appraisal of the league’s ideological orientation and the true meaning of America’s game.