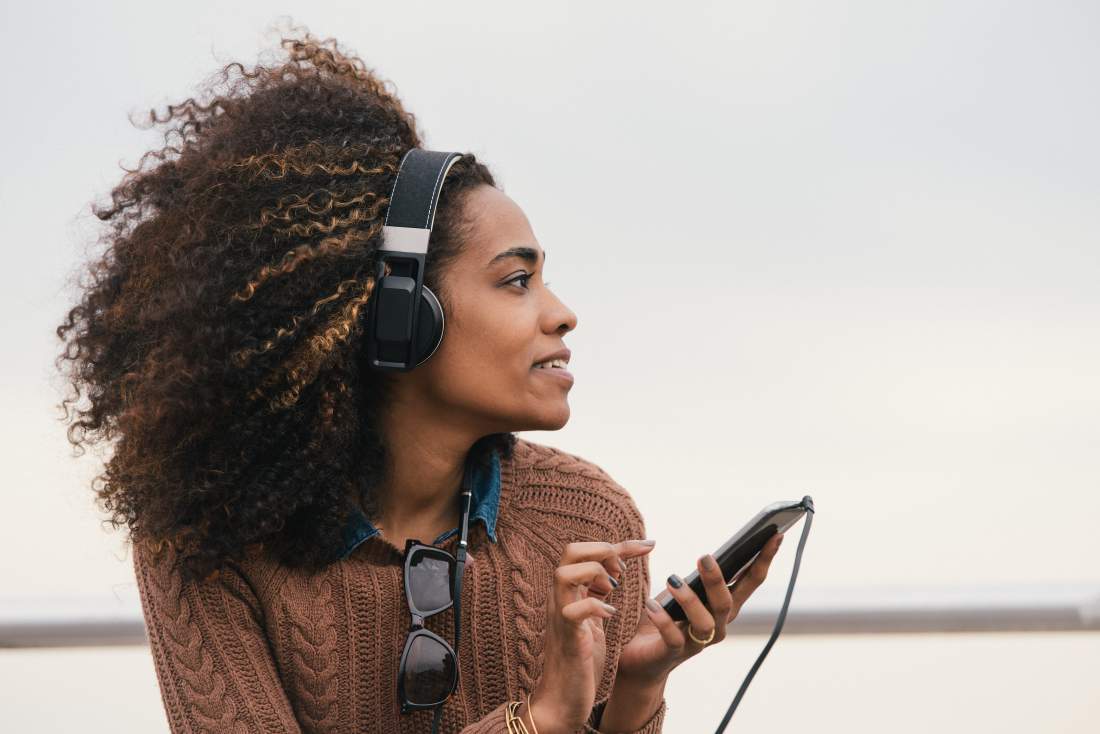 Podcast research must expand who the imagined podcast listener is

Podcasts are a vastly growing medium, with no slowing down in sight. According to a study done by Edison Research, in 2018 monthly listenership grew 26% (an increase of 2% from the previous year). The study also found that podcasts are the number one audio source based on the time of consumption among podcast listeners. This is presumably due to the proliferation of apps that make podcast listening more accessible. Gone are the days of listening to a podcast solely on an iPhone, or worst, a computer which made mobile listening difficult. The new podcast listening apps have opened up podcasting to non-Apple users and therefore new audiences.

What hasn’t changed, however, is the assumption that the average listener of podcasts is White. According to the Edison Research study The Podcast Consumer 2018, the average listener is highly educated (34% of monthly consumers have either advanced degrees or some form of graduate school); employed full-time, and is a man (52% of monthly consumers are men as opposed to 48% of listeners being women). The study does not account for the race of this idealized consumer, but elsewhere it has been imagined that this listener is White. Scholars Morris and Patterson [1] summarized that the average podcast listener is “often dominated by older, educated, white professional males. Consumption also skewed toward the well-educated and affluent.” [2] In another study, McClung and Johnson [3] sought to find the motives of podcast users, and their findings indicated similar demographics. For the purpose of this article, race will be the primary lens that shifts the discussion of podcast consumers but surely future research should consider other factors. These identity markers impact not only how a consumer engages with the podcast, but also how the host(s) imagine and structure the show. In not considering other races as imagined listeners of podcasts (or ignoring race altogether, as was the case in the Edison report), Whiteness is centered and podcasts are constructed as White spaces. Next, I will discuss just how the podcast (and public radio) space is constructed as a White one.

Growing attention has been paid to the perceived Whiteness of both podcasts and public radio, largely due to an article written by scholar and hip hop artist Chenjerai Kumanyika in 2015. In reflecting on a radio piece for the Transom Traveling Workshop on Catalina, Kumanyika did not recognize the voice he was writing in, or the voice that he was speaking in. Writing about this experience, Kumanyika [4] would later realize: “…I was…imagining someone else’s voice saying my piece. The voice I was hearing and gradually beginning to imitate was something in between the voice of Roman Mars and Sarah Koening. Those two very different voices have many complex and wonderful qualities. They also sound like white people.” [5] 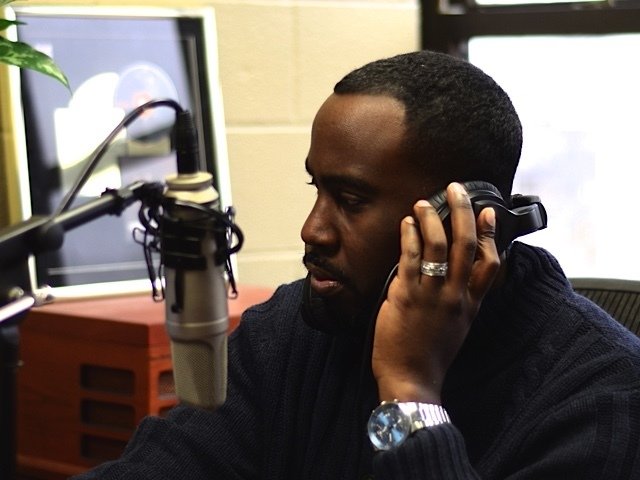 This reflection sparked a larger panic within the podcast and public radio spheres. The larger questions that shaped the conversations questioned if Kumanyika was on to something: is there a particular radio voice, and is it White? There seemed to be a consensus among those participating in the conversations that yes, there is a specific voice common in public radio (referred to as the NPR voice amongst some) and yes, it does sound like it belongs to a White person. A commenter on Kumanyika’s piece echoed this, stating, “I too am a huge fan of public radio though I have found that the “flat Mid-Atlantic” accent is becoming more and more prevalent on that band too.” [6] The sound of the NPR voice is a familiar one: calm, soothing and void of any regional accent or other identifying factor that lets the listener know who the speaker is. Although the NPR voice is void of a distinct accent, it calls to a specific kind of speech and tone that signifies Whiteness (hence the panic and anxiety around Kumanyika’s reflection). 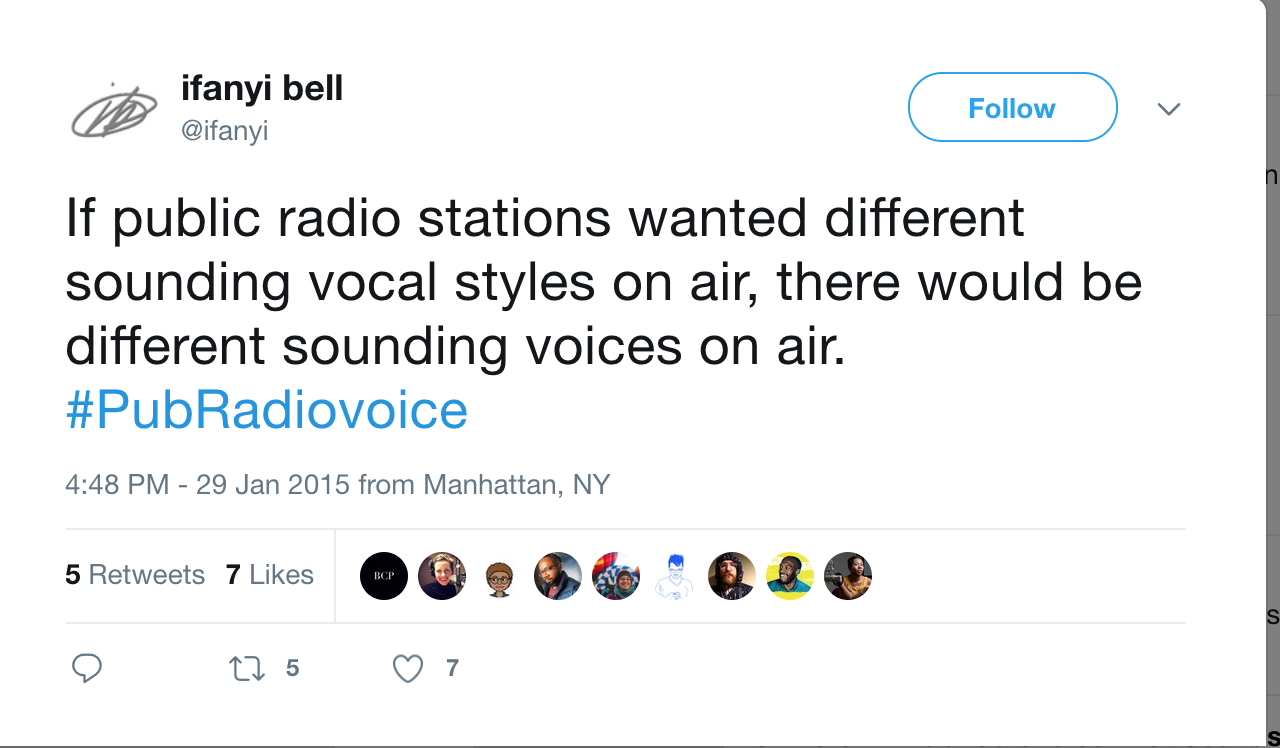 Tweet using the #pubradio hashtag, which circulated during the discussions about Whiteness and public radio

It is important to deconstruct the Whiteness of public radio. It impacts not only the kinds of stories told, but also who tells them and what these stories sound like. What stories and perspectives do we lose if that standard is upheld? Nuance, emotion, regional dialect, and most importantly, identity is lost. There are podcasts created by people of color that push back against this style of tone. Florini, [7] writing about Black podcasts, states that they: “largely eschew the “polished” and tightly formatted character of most mainstream corporate media, opting instead for an informal, flexible approach that allows for free-form conversation and embraces a range of Black vernaculars and regional accents.” [8] For the listeners of these podcasts, Florini argues, the familiarity and diversity of the accents and vernacular used and topics, along with the intimacy that comes with listening to the podcasts creates a cocoon of sorts, sonically insulating them from their surroundings. [9] It is precisely because of the Blackness of the hosts and the podcasts that the listeners are attracted to these podcasts that stand in opposition to the more “traditional” or White podcasts.

An example of this kind of podcast is The Read, hosted by queer Black friends Kid Fury and Crissle. It debuted in 2013 to immediate success and popularity. The show’s format is as follows: Black Excellence, Hot Topics, Listener Letters and The Read. During the Black Excellence segment, the hosts highlight Black individuals who have done noteworthy things, such as a pair of  teenage siblings creating a medical emergency app, and the first Black woman to own a NASCAR team. Next, in Hot Topics, the pair discuss celebrity happenings within Black culture. Many of the celebrities have success within Black popular culture, but not necessarily within mainstream culture. Next is the Listener Letter segment. Listeners write in letters to the show, and Crissle and Kid Fury respond. The letters range from relationship questions to questions about dealing with racist colleagues to how to navigate the political climate post-Trump’s election. Lastly, is The Read [10] segment, in which the two take turns expressing their displeasure, anger, frustration at various people and topics.

Logo for the podcast The Read, which is considered one of the most successful Black podcasts

The read is a racialized, sexualized and gendered space. It is here where Kid Fury and Crissle theorize about their locations as Black, queer people existing within a political landscape that calls for the dismissal and refusal to accept their humanity. In this space, they speak to each other but they also speak to a larger system, and the beauty of the podcast is that within this space, they are not interrupted or denied voice or agency. In addition, sound is spatial. Unlike the NPR voice, the voices of Kid Fury and Crissle are distinct. Both of them are Southern, and this comes out in almost every episode. Kid Fury is a native of Miami, and Crissle is from Oklahoma, with roots in Louisiana and Texas. Though these spaces are very different, they are both uniquely Southern and place the hosts in very specific locations and cultures. There is no flattening of their accents, no hiding of their Southern roots, which adds to the spatialization of the sound of the podcast. Not only is this podcast Black, but it is very Southern, as well. The Blackness is signified through the cultural references, and even in the opening music, which is a hip-hop inspired remix of “Oh, Happy Day” a gospel song featured in the movie Sister Act 2: Back in the Habit (1993).

Not only are their accents very distinctly Southern, but they both have distinct laughs. The hosts both have very unique, boisterous laughs—when the two of them find something genuinely hilarious, it makes for a loud few seconds. This may be alarming for a listener who isn’t familiar with the show, but it has become one of the signature things that make the show endearing. It also shows their friendship and that they genuinely enjoy being around one another. It is not enough solely to call out the podcast as a White space. It is important to distinguish what makes the Black podcast Black. In analyzing The Read, I have shown how it signifies Blackness through its various segments, cultural references and its political space in the read segment.This project has sought to first identify the podcast and public radio space as one where Whiteness dominates, and then to present an example of a space where this is challenged and where erasure is addressed and then resolved. [11]

1. Podcast research must expand who the imagined podcast listener is.
2. Chenjerai Kumanyika caused a panic when he reflected on using his authentic voice during a radio piece.
3. Tweet using the #pubradio hashtag, which circulated during the discussions about Whiteness and public radio. (Author’s screen grab)
4. Logo for the podcast The Read, which is considered one of the most successful Black podcasts.