The term “social justice warrior” or its more common abbreviation “SJW,” is all the rage in the “alt-right” and conservative online spaces. Along with the “PC police,” SJWs are portrayed as humorless harpies who take pleasure in policing and calling out others online. Despite the fact that the phrase “social justice warrior” could connote a strong, Amazonian-fighter figure who is quick to fight back on behalf of social justice causes, somehow it has transformed into a pejorative phrase as a catch-all used to describe feminists, anti-racists, progressive activists, and the liberal media. But how did the phrase become associated with the “alt-right,” and lose its potentially powerful meaning? To answer this question, Shira Chess and I examined how SJW memes on “alt-right” blogs and communities like Reddit. Our article in Feminist Media Studies discusses how the SJW acts as a kind of social justice and feminist bogeyman in these spaces.

While the first use of the phrase “social justice warrior” was used in news articles around 20 years ago, it did not gain a pejorative meaning until much later, eventually entering the Urban Dictionary (a crowdsourced slang lexicon) in 2011. Know Your Meme suggests that the phrase “keyboard warrior” is an earlier instantiation of “social justice warrior,” the former having been used to describe a person who authors vicious screeds targeting others from behind the safety of their keyboard. 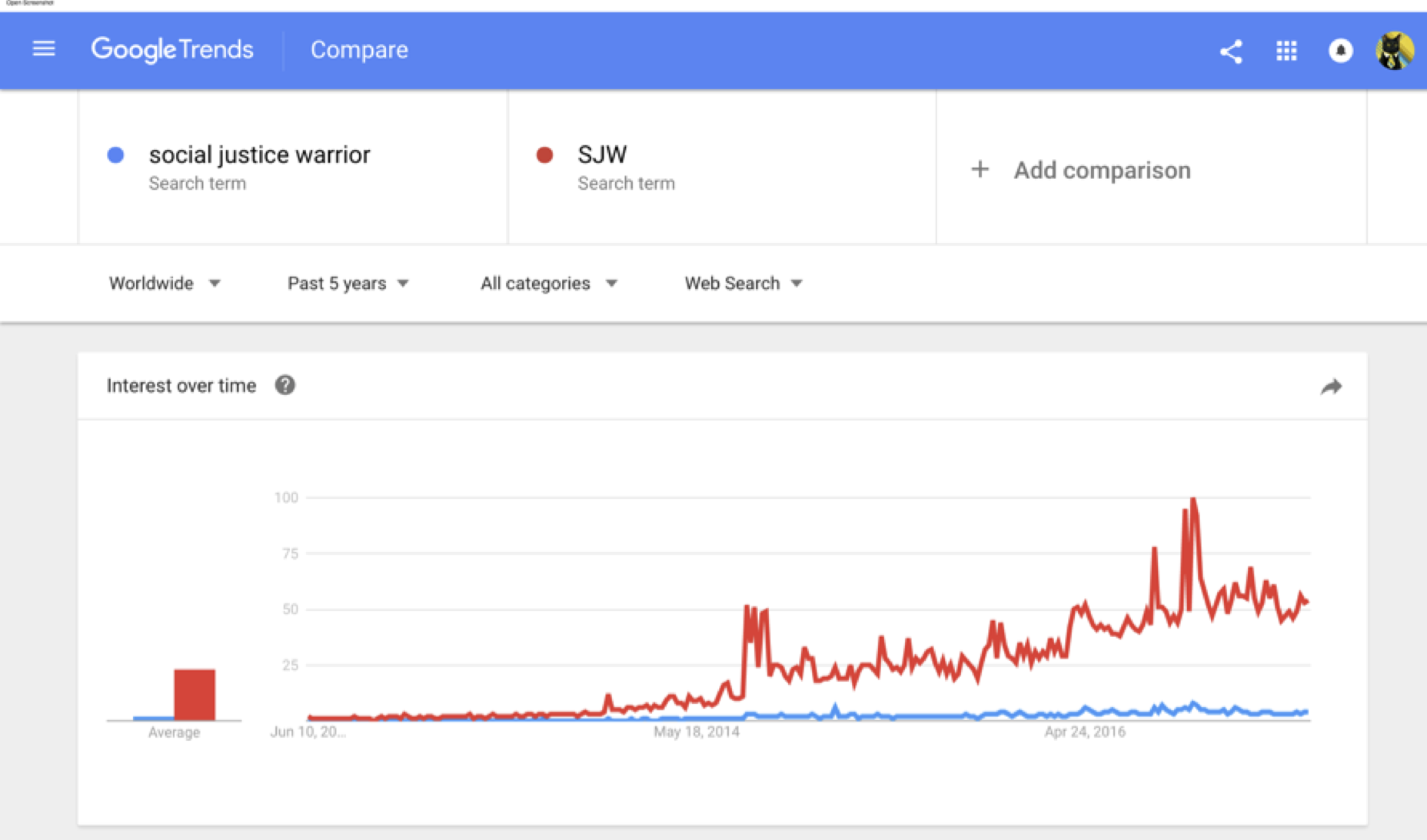 Why this particular date? It happens to be the same time that #Gamergate was breaking on 4chan, Twitter, and Reddit. Ostensibly about “ethics in games journalism,” #Gamergate actually was a loose, leaderless coalition of frustrated gamers, far-right activists, misogynists, and trolls who coalesced around a common idea – that games and other forms of popular culture were overly invested in issues of diversity and representation. For #Gamergaters this meant that the games, comics, and movie franchises they loved were increasingly bowing to political correctness, and that “social justice warriors” (or, more frequently, SJWs) were responsible. The SJW moniker quickly moved from the limited sphere of #Gamergate to the “alt-right” (as many of the same people were involved in both) and eventually entered the mainstream conservative lexicon. As it did so, it gained an additional element: the SJW was not only interested in spoiling the fun for others (by pointing to problematic representations in popular culture, for example), but was also intensely fragile. Thus, the SJW would need “trigger warnings” and “safe spaces” and could alternatively be referred to as a “snowflake,” who would take offense at any moment and simply collapse (or melt). 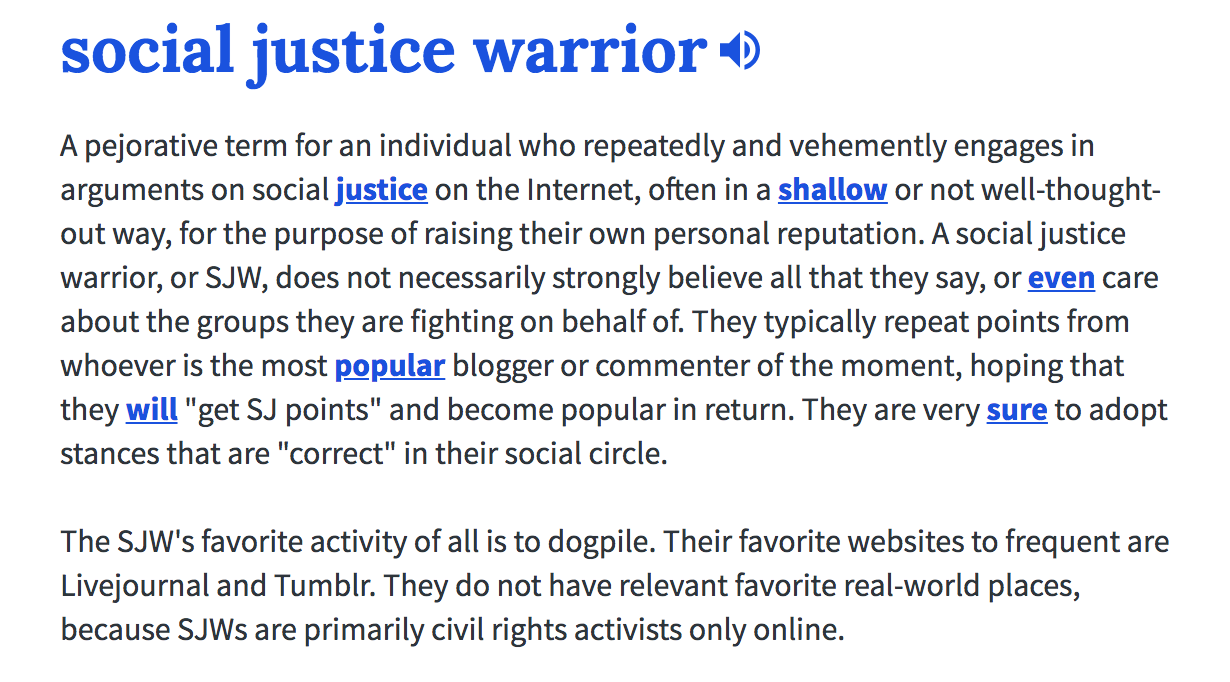 This popular definition from Urban Dictionary suggests that SJWs are also duplicitous, as they are motivated not by the actual causes they support, but by wanting others to believe they support said causes. Social Justice Warriors are also accused of offering only shallow arguments to support their assertions. This also points to a key element of the SJW – that they are emotional rather than rational beings. 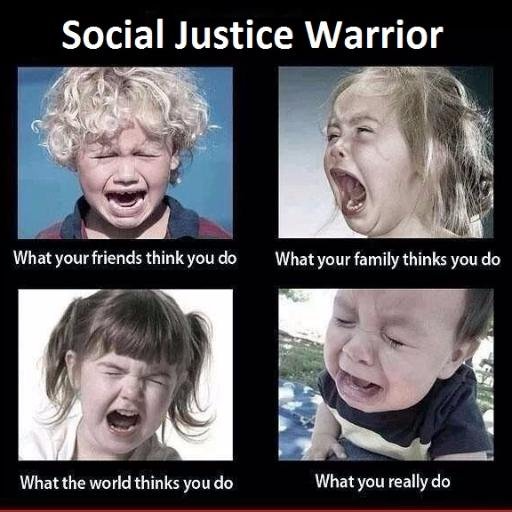 For example, this image (a remix of the popular “what people think I do/what I actually do” meme) portrays SJWs as literal crying babies. It also points to a common trope within conservative circles, one that posits younger generations as being increasingly soft, feminine (and, by extension), emotionally fragile. 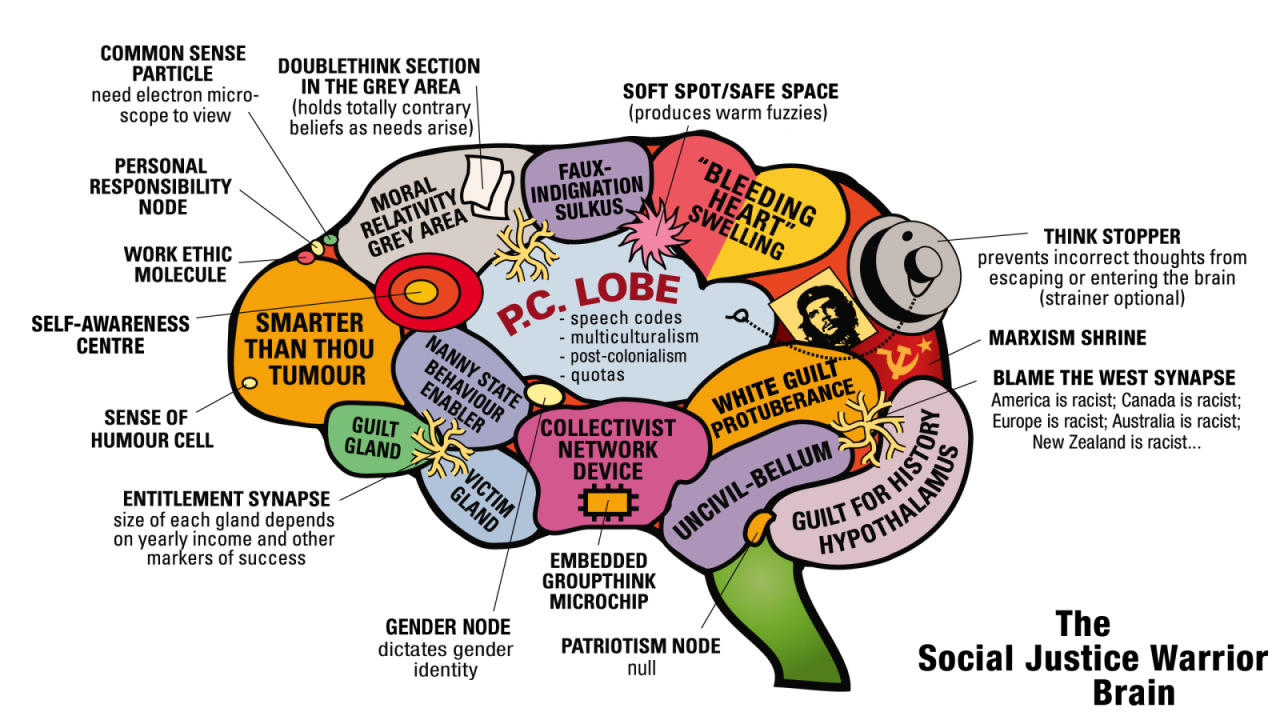 In this meme, the brain of the SJW is imagined as being fundamentally different than a “normal” person’s. At the literal center is the PC node, here filled with ideas about speech codes and multiculturalism. The smallest nodes in this image are reserved for personal responsibility and rational thought, suggesting that the SJW are entitled do-nothings who are incapable of engaging in logical argumentation when confronted. And, not surprisingly, the SJW’s sense of humor node is seen as exceptionally small and under-developed, while the “smarter than thou” node overwhelms much of the brain. This echoes Sara Ahmed’s image of the “feminist killjoy” which suggests that feminists and marginalized people exist solely to destroy the pleasure that others take. She writes, “feminists by declaring themselves as feminists are already read as destroying something that is thought of by others as not only being good but the cause of happiness. The feminist killjoy ‘spoils’ the happiness of others; she is a spoilsport because she refuses to convene, to assemble, or to meet up over happiness”. [1] This image suggests that not only is the SJW the ultimate spoilsport, but they are inherently (biologically) different from other people. 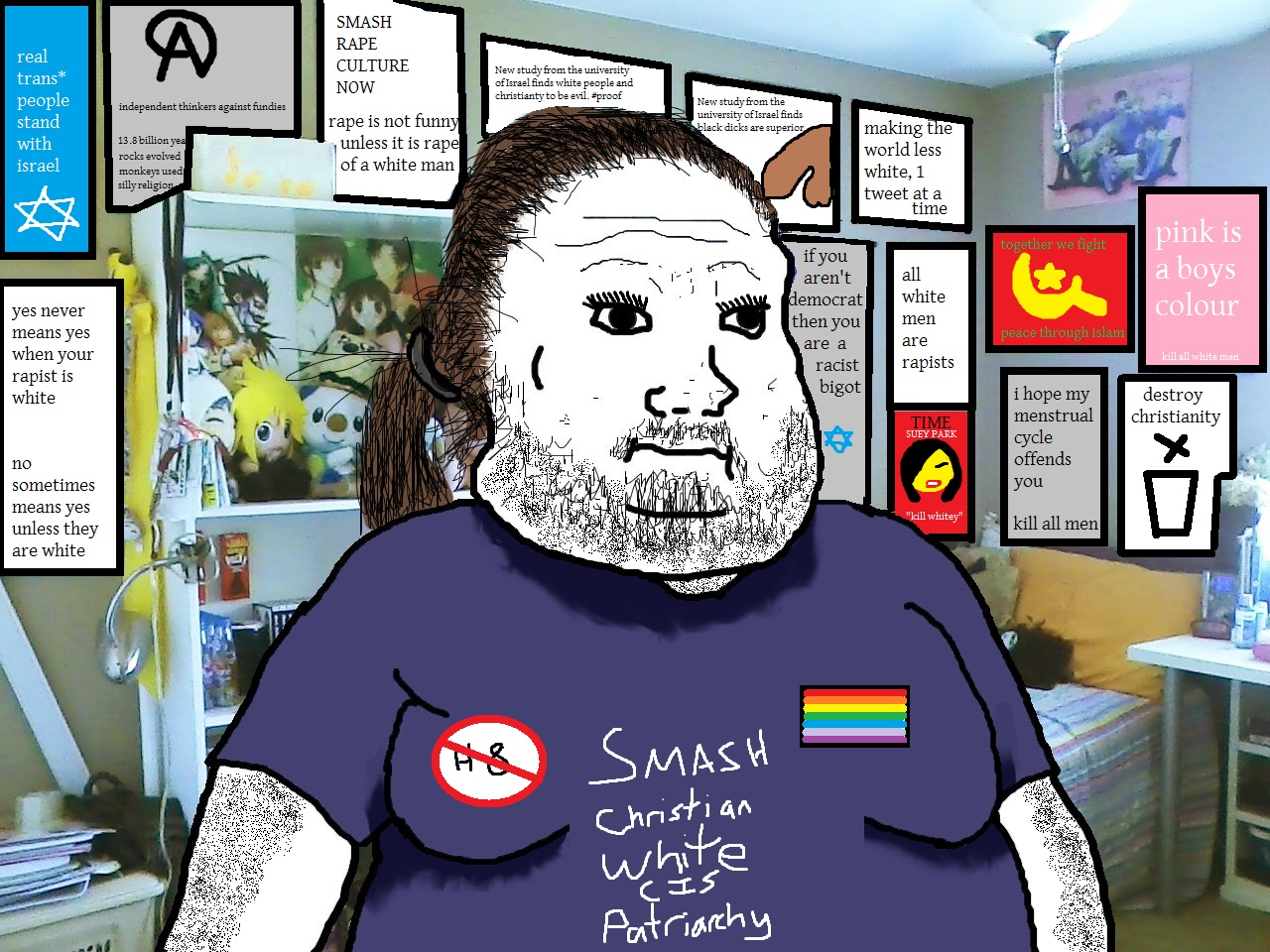 But it is not just the brains of SJWs that are abnormal; their bodies are pictured as deviant and undesirable as well. Here we see an SJW in their (presumably college) dorm room, surrounded by posters of various causes. The person in the image is drawn in such a way as to highlight their ambiguous gender and to emphasize that they are soft (literally and metaphorically) and childlike. This image also points to larger ideological figurations of the “alt-right,” as it features anti-Semitic and racist references in the background. 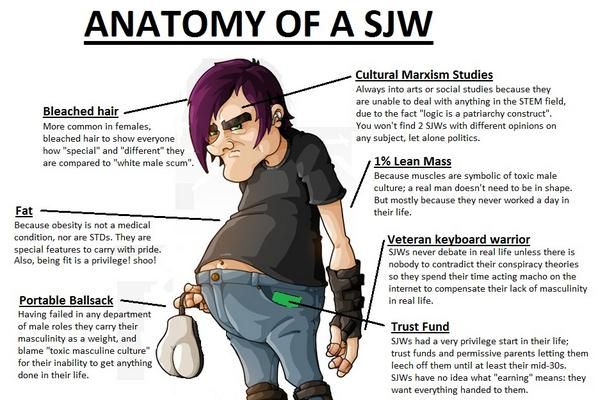 Anatomy of a SJW

Likewise, this meme argues that even SJWs that are marked as “male” are not appropriately masculine (hence the “portable ballsack”). Again, the notion that SJWs are privileged and incapable of working hard is illustrated here, with any gains being marked as somehow ill-gotten. As with the prior image, this one also points to larger ideological underpinnings of the “alt-right” – specifically a denial of institutional barriers that may limit a person’s ability to succeed and a suggestion that the real impediment is their unwillingness to “work hard.”

Other memes we examined suggested that there was something monstrous and ultimately threatening about the very existence of the SJW. In one they are called “cancer,” and in another they are referred to as viruses. By this logic, SJWs must be eliminated, lest they “spread” and infect others with their emotionality and humorlessness. They are literally diseased to their core – unredeemable and inhuman. As Barbara Creed argues, the idea of the “monstrous feminine” is a powerful image, as the anxieties it provokes, “speaks to us more about male fears than about female desire or feminine subjectivity”. [2] These fears often recall a feeling of revulsion of woman’s bodies and existence as unclean, “abject,” and grotesque. Creed’s work is often applied to images of women (and monsters) in films such as Aliens and Carrie, but it’s important to note that ways in which these memes create a sense of the SJW as possessing abnormal/monstrous bodies and brains.

This is where the image of the SJW becomes more troubling, moving away from being used as a convenient shorthand by the “alt-right,” to becoming a way to other those they deem threatening. The notion that the SJW must be eradicated or else their intolerable ideas could spread, could eventually lead to what Daniel Jonah Goldhagen refers to as “eliminationist rhetoric.” [3] Often seen as a precursor to genocidal acts, eliminationist rhetoric encourages the dehumanization and scapegoating of targeted groups as a way to justify their extermination. Thus, as the “alt-right” continues to gain momentum and mainstream their message using memetic logics, it’s important to dismantle and analyze the underlying ideological work a seemingly benign pejorative phrase like “social justice warrior” can do.