Although easily recognized and intuitively experienced—the ultimate in “you know it when you see it”—humor is notoriously difficult to pin down. This essay addresses a new wrinkle in that old problem: the fact that online, it’s not just difficult to describe what humor is and how it functions, it is difficult, and in some cases outright impossible, to know if the word “humor” even applies.

This isn’t to say that the contours of online humor are wholly unprecedented. There are a number of through lines connecting humor across era and media. An understanding of these connections helps conceptually ground discussions of humor. It also helps underscore what, exactly, is so new about humor on the internet and why, exactly, that matters.

The first point of continuity is humor’s constitutive nature; the fact that online, humor helps build and sustain social worlds across a variety of collectives for a variety of reasons. One of our favorite examples is the vast constellation of humorous X-Files-focused imagery and commentary posted across social media. This content—from Dana Scully sparkle hair GIFs to Fox Mulder cat interrogations—helps connect the countless thousands of people around the globe, ourselves very much included, who enjoy playing with, sharing, and remixing lore about the paranormal FBI superteam.

Posted by Megan Resig to the Berry on September 30, 2014 as part of a “meanwhile on the internet” listicle; precise origins are unknown

Another point of online/offline connection is that humor, regardless of era or media, presupposes shared cultural experiences. Elliott Oring underscores this point in his theory of appropriate incongruity, which frames humor as a clash between juxtaposed elements, between what is expected in a given social context and what is actually experienced. In the case of X-Files play, participants have to have some existing knowledge of who Mulder and Scully are before they can decode why it’s funny, for instance, to augment the ever-serious Scully with ostentatious sparkle hair and an IDGAF FBI badge and the ever-paranoid Mulder with suspicions about a cat. 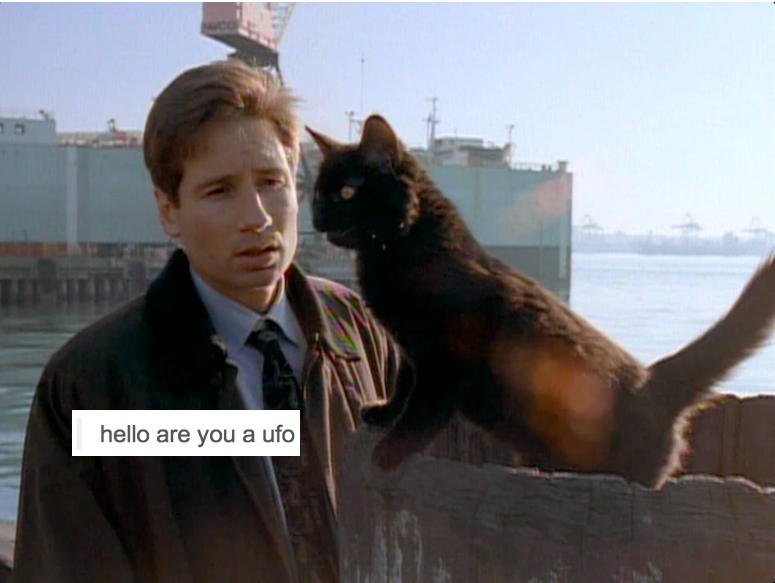 Shared and reblogged by countless users on Tumblr starting in 2015; the truth of its origins remain out there

In these examples, appropriate incongruity occurs as the expectations of those familiar with the characters are both violated and validated. In the case of Sparkle Hair Scully, the character’s seriousness is undermined (Oh Scully, you’re a buttoned down person of science; where’d you get that sparkle hair!), but the violation simultaneously fits with her seriousness (Oh Scully, you do indeed not suffer fools; shine on and let ‘em hate). In the case of Cat Interrogation Mulder, the character’s paranoia is affirmed (Oh Mulder, always looking for the latest human-alien hybrid), but that validation is pushed to absurdity by its implementation (Oh Mulder, talking to a cat is a stretch, there’s not even any bees hiding under there). A shared understanding of who the characters are—along with a litany of more subtle shared understandings (that sparkle hair is “silly,” that Scully’s expression communicates exasperated disdain, that UFOs are a common trope in science fiction narratives and earnest conspiracy theories, and that cats are decidedly not UFOs )—is required to decode each fleeting joke.

Additionally, humor across media uses paralinguistic signals to establish its comical register. Although digitally mediated humor often precludes more embodied cues like tone of voice, encouraging smiles, or discouraging side eyes, online participants fill in those blanks with tools like emojis, GIFs, creative Photoshops, and nonstandard spelling, syntax, and grammar. In short, you may not be able to physically wink at strangers on the internet, but you can communicate the same basic idea through a well-placed freeze-frame.

Uploaded to imgur by user MeSoMerry on November 8, 2014; winking at you in the dark ever since

Thanks to this in-group signaling, humorous exchanges—wherever they might occur—harken to the play frame described by anthropologist Gregory Bateson in 1972. As he notes in his description of dogs’ play, properly-framed playful action creates an offset reality. One of the implications of this offset reality is that, when joking turns towards mockery or teasing, play that otherwise might look like aggression isn’t interpreted as actual aggression (against the joke hearer, against Gillian Anderson, the actor who plays Dana Scully, etc.). The play frame establishes that the joke is something said but not really meant, prompting laughter rather than tears.

Finally, while humor across era and media draws the laughing us more tightly together, it can also cast out an unwanted them and assert restrictive, normative values about what counts as funny and who counts as worthy of inclusion. In the case of X-Files silliness, the ethical stakes might seem low; you either think sparkle hair GIFs are amusing or not. And yet these seemingly innocent images can still be used to mock or alienate others, like if Cat Interrogation Mulder was used during a conversation to imply that someone was out of touch with reality, or if hundreds of Twitter users sent Gillian Anderson Sparkle Hair Scullies captioned with misogynist messages. Whatever humor’s source, an amusing chuckle for some can mean a lonely pang for others.

There is, in short, a great deal of overlap between humor online and humor offline. That said, the affordances of digital media have a major impact on the kind of humor that can spread online, and what impact that humor can have. These affordances don’t negate any of the above characteristics. They do, however, make it more difficult for both ingroup participants and outside observers to navigate, or even identify, the play frame.

Most basically, the ability to sever a digital text from its broader context results in a media landscape overrun with politically and ethically unmoored content. This allows online participants to—very ambivalently—flatten political, emotional, and interpersonal nuance into a fetishized punchline. All this fetishized flattening might not seem especially problematic when considering Sparkle Hair Scully—until one remembers that even “simple” visual jokes like these can have a negative emotional impact, depending on how, when, and why they are employed. Beyond more seemingly innocent jokes, online humor that plays with death, pain, and tragedy exponentially amplifies the potential harm of easy online decontextualization. Real hurt occurs when real people with real lives become just another collection of pixels to repost, remix, and laugh at.

Context collapse—the unpredictable co-mingling of different audiences on social media—further complicates laughter online. This is particularly true when content is hurtful or dehumanizing, or when a particular joke—at least, what looks like a joke to some—could have very different meanings to very different audiences. Say when the same image functions as pointed irony, dadaist absurdity, or even as fighting words, depending on who might be looking. However obvious the joke might be to members of the laughing us, the not-laughing them often has no way of decoding group-specific intentions, and therefore has no way of knowing what the appropriate reaction to a particular joke might be, if it’s even a joke to begin with. Online, it’s simply not clear, just by observing, what worlds are being built by whom, what worlds are being challenged or dismantled, and who’s being invited into the play frame, particularly when content begins zooming unattributed across and between online collectives.

For these reasons, the very notion of online “humor” needs scare quotes; whether or not something qualifies as funny, whether it was meant to be humorous by someone, at some point, often cannot be verified. This, in turn, calls into immediate question the efficacy of the rejoinder “I was just joking,” This excuse is flimsy even when the joke teller and joke listener know each other, and both concede that a given utterance is meant to be a joke; a person doesn’t get to sidestep responsibility for how their actions impact others simply because they’re laughing.

Online, in a media ecology explicitly designed to bombard participants with messages from strangers, the assertion that “I was just joking” isn’t just myopic and self-serving, it’s often outright nonsensical. The joke may have been intended as an innocent jab, but that point is moot if the audience does not and cannot decode the play frame or even recognize its basic existence. Depending on the content, the miscommunication can get very serious as it barrels across social media. After all, once unmoored from the signal “this is play,” content that was meant to be just a playful nip looks an awful lot like an actual bite. And when confronted by what someone regards to be an actual bite, there is a strong tendency for aggrieved parties to bite right back. Not as a function of oversensitivity to humor, or the inability to take a joke. But rather the inability to know that a joke—a “joke”—is even happening.

Image Credits:
1. Posted by Megan Resig to the Berry on September 30, 2014 as part of a “meanwhile on the internet” listicle; precise origins are unknown.
2. are you a ufo? Shared and reblogged by countless users on Tumblr starting in 2015; the truth of its origins remain out there.
3. Winking Scully. Uploaded to imgur by user MeSoMerry on November 8, 2014.