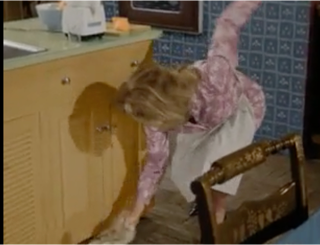 A still from the Bewitched episode “Be It Ever So Mortgaged.”

The history of American feminism is also a history of white women centering their own experiences. From Seneca Falls to The Feminine Mystique and through hashtags like #NotAllWhiteWomen, white feminists have often ignored or actively excluded women whose backgrounds differ from their own. The months leading up to the Women’s March on Jan. 21, as Jia Tolentino outlines in The New Yorker, reflected this historical positioning: many white women were angered by the suggestion that contemporary feminism and The Women’s March itself should engage, express, and embrace differences. [1 ]

This narrow and racist brand of white feminism has proven extremely marketable. However, packaging feminism in this way is by no means new. In this column, I look at how a potentially progressive 1960s sitcom like Bewitched imagines and reinforces an exclusionary white feminism. Premiering while the Civil Right Movement waged a televised war against white supremacy and in the same year as the publication of The Feminine Mystique, Bewitched’s centering of whiteness and white women especially was not unique. However, the sitcom’s magical gender politics coupled with its investment in whiteness provide a historical example of how mainstream television embraced a consumer-driven white feminism that operated at the expense of people of color.

In the pilot of Bewitched, Samantha’s (Elizabeth Montgomery) mom jokes that when Darrin (Dick York)—Sam’s newly minted husband—finds out that she is a witch, he will certainly discriminate against her. He is sure to be “prejudiced” against Samantha, her mom argues. And indeed, Darrin does struggle with accepting his new wife’s bewitching talents. The pilot and other episodes are peppered with similar jokes about prejudice and discrimination against Samantha—ironic and comic, the show seemingly suggests, because she is white (and blonde, no less), middle class, and quite pretty. Here, the humor relies on the premise that she is in fact not discriminated against and thereby mocks people who face real discrimination.

This racist and sexist structure, entirely absent of bodies of color, relies on an inferential racism, which depends on “premises and propositions” that have inscribed in them, as Stuart Hall argues, “a set of unquestioned assumptions” that “enable racist sentiments to be formulated without ever bringing into awareness the racist predicates on which the statements are grounded.” [2 ] This brand of racism, Hall argues, is far more insidious than its overt counterparts. Following Hall, in Bewitched, white supremacy masquerades as both a troubling feminist appeal and harmless fun—after all, it’s just a joke. This is the danger and insidiousness, as Hall warns, of inferential racism, wherein the humor treats race and racialized violence with irreverence. Discrimination, after all, doesn’t actually happen to Samantha. The misunderstandings she has with Darrin become a source of humor, erasing real fears of violence. Undergirding the jokes about discrimination in Bewitched, remains an inability to engage the very real discrimination of people of color as serious.

At the same time, the sitcom pokes fun at the expectations placed on white housewives to perform perfection. The second episode, “Be It Ever So Mortgaged” begins with a cheeky focus on normalcy as the introductory voiceover describes Samantha’s morning: “Here you see the average normal suburban housewife, preparing breakfast for her husband.” Meanwhile, Samantha squeezes oranges into a juicer, while wearing a white apron over a pink floral print dress. As the shot pulls out, we realize that Samantha is squeezing the oranges onto the kitchen floor, not into a glass. The camera, then, follows her to the stove where her pan is on fire. The male voiceover continues with anthropological-like observations, “The capable suburban housewife moves efficiently through her tasks” (Season 1, Episode 2). Here, the juxtaposition of the voiceover with Sam’s breakfast-making difficulties–and her ultimate need to use magic–pokes fun at and critiques the rigid expectations of the perfect contemporary homemaker. 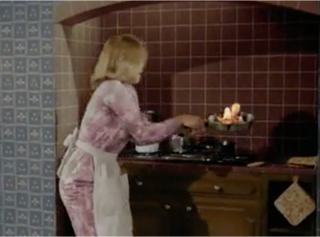 Samantha struggles to fulfill “the rigid expectations of the perfect contemporary homemaker.”

As Lynn Spigel writes about Bewitched — and the similar fantastic sitcom, I Dream of Jeannie — “the elements called into question are not the supernatural elements of the story […]. Rather, we are “made to question the ‘naturalness’ of middle-class suburban ideals,” like the role of and expectations placed on the housewife and the gendered division of labor. [3 ] In this sense, Bewitched is in fact progressive, pointing to the ways in which the perfect housewife is a troubling and controlling fiction that requires women to quite literally give up their personal magical powers, subsuming their lives and dreams into the desires of their husbands. Not only does Bewitched play with this notion, it also suggests the impossibility of being the perfect housewife and the need for magic to keep everything in order. Like Spigel points out, the sitcom seems to celebrate the constraints of white suburban life even as it points to its limitations. [4 ] 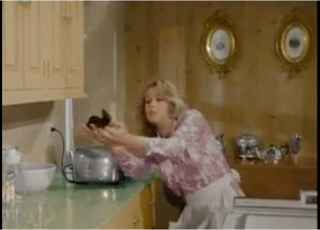 The sitcom, following David Marc’s observation in Comic Visions: Television Comedy and American Culture, is a genre of “comic mitigation.” [5 ] Sitcoms, Marc suggest, desperately seek a middle ground, that is neither progressive nor regressive. In this way, we can see the jokes on Bewitched as simultaneously interested in white women’s liberation at the expense of embracing a repressive racial politics. The discussions of what will happen if Samantha is discovered — which mobilizes discourses of passing — and the problems she might face if she is in fact found out, underscore the limits of the Bewitched’s seemingly-progressive politics. Here, the sitcom reflects a racist politics of fun, reliant on the underlying assumption that white viewers will think it funny to mock the very real discrimination experienced by people of color.

Making women’s liberation palatable and comic in Bewitched, then, foregoes and dismisses any intersection with race, sexuality, or class. Here, like elsewhere in pop culture, nothing is ever just a joke. It’s both troubling and telling that Bewitched’s politics of fun remains relevant today: white feminist complaints surrounding The Women’s March reveal an ongoing inability to de-center white women’s experience and value intersectionality. We’ve seen this brand of feminism embraced by white feminists and marketers with best-selling books like Lean In and through the marketing of Pantsuit Nation and “Nasty Woman” mugs, t-shirts, and totes. In many ways, there is nothing wrong with buying feminist swag or raising money for organizations like Planned Parenthood through such promotions. However, we must remain wary of this strain of marketable feminism. Like Bewitched, consumerist white feminism troublingly masquerades as progressive or even worse revolutionary, even as it often ignores and relies on the erasure, labor of, and violence against those who do not fit the white heteronormative model.

All images are author’s screen grabs from the Bewitched episode “Be It Ever So Mortgaged.”