Mindy Kaling in The Mindy Project, expressing herself as a Single City Girl

Television has drastically changed our perceptions of the world and ourselves by mediating the shifts in culture for a national audience. In today’s media environment, archetypes created decades earlier still retain value and significance, and young people who identify with a broad range of demographic categories use media to help them navigate independence, intimacy, and adulthood. Mary Tyler Moore embodied the evolution of women’s options and simultaneously established and disrupted the Single City Girl archetype.

The media archetype of the Single City Girl developed during the twentieth century in response to first and second wave feminism. Television negotiated pre and post feminist ideologies and introduced the new American woman. Defined as a newly independent character who is exploring life options including career and love, the Single City Girl emerges repeatedly in literature (e.g., Sister Carrie, 1900), film (e.g., Breakfast at Tiffany’s, 1960), and television (e.g., That Girl, 1966-1971); in recent years, this archetype has manifested in cable (e.g., Sex and the City, 1998-2004), streaming services (e.g., Unbreakable Kimmy Schmidt, 2015-), and user-generated content (e.g., The Mis-Adventures of Awkward Black Girl, 2013-2015).

The Single City Girl is framed as an emerging adult learning to be independent and intimate. She simultaneously enjoys being single, but is also looking for her other half. She valorizes romance, but is aware of how it can derail her personal aspirations. She deliberates these issues with friends, but also finds joy in spending time alone; the city is her partner and her support system. [1] She faces the future with humor and self-deprecating awareness. Although she is defined by her gender, age, race, and class, she demands to be recognized for her intelligence, career, and creativity.

The Single City Girl is perpetually torn, aware of social injustices, but also excited to embrace the hegemonic feminine ideals that define womanhood, especially being attractive. She is in control of her own life, and at the same time a victim of capitalism and consumerism. The Single City Girl is aware of and defined by the cognitive dissonance between femininity and feminism; she is simultaneously independent and infantilized interpersonally and systematically, hence the term “girl,” not “woman.”

In the 1960s, different paths for womanhood emerged publicly with Sex and the Single Girl (Brown, 1962) and The Feminine Mystique (1963), as well as a wave of female television characters. Programs like The Dick Van Dyke Show (1961-1966) and Peyton Place (1964-1969) juxtaposed the housewife and the Single City Girl, often with a bias towards the former. Other shows like Hazel (1961-1966), Bewitched (1964-1972), and I Dream of Jeanie (1965-1970) embodied the subversive housewife who smashed the “cult of domesticity,” thereby humorously containing and subjugating female power while mocking the patriarchy. [2]

That Girl debuted in 1966 and featured Ann Marie, a young ingénue who left her parents home for a life in the big city. In theory, Ann Marie’s priorities resided in her career and marriage was secondary, but the program catered to pre-feminist ideologies in order to maintain a likeable character and avoid offending the audience: her paychecks were sporadic, but she had a large and fashionable wardrobe; she had a regular boyfriend, but he never spent the night; she was independent, but depended on her father to maintain her lifestyle. In all of her contradictions, Ann Marie was the woman that women wanted to be, and the show received thousands of letters every week asking for advice. [3]

In 1970, The Mary Tyler Moore Show (1970-1977) took this narrative further, resolving the inherent conflicts present in That Girl by featuring a character that was focused on her career and, although romance and relationships were of interest, prioritized independent advancement. It was the first sitcom to assert that work was not just a prelude to or a substitute for marriage; rather, a career could be the center of a satisfying life. Mary Richards challenged the existing stereotypes of women on television: single by choice, over thirty without being a widow or a nurse, self-sufficient, and career focused. Her decisions were personal, not political, and she met every misogynistic comment with a smile and a witty remark.

For eight years, Mary Richards helped resolve a decade rife with cultural and political turmoil. By softening the firm ideals of the Women’s Movement, she popularized the cause. During the show’s run, the nation grappled with the Civil Rights, Equal Rights, reproductive rights, and the burgeoning gay rights movement. Feminism was a household term and Mary Richards embodied it.

In 1970, Nielsen replaced radio homes with a younger, more urban audience, thereby initiating a series of youthful protagonists dealing with modern problems in urban settings. The consciousness of the television industry was raised because of the high ratings of “primetime feminism.” [5] However, in this process, producers stumbled upon an identity schema that resonated with audiences.

In the four decades since The Mary Tyler Moore Show ended, a proliferation of Single City Girls have embraced a wide variety of identities: One Day at a Time (1975-1984) featured a divorced mother raising two teenage daughters; Laverne and Shirley (1976-1983) were working-class Single City Girls in 1960s’ Milwaukee; Golden Girls (1985-1992) followed four senior women as they navigated single womanhood later in life; All American Girl (1994) and Living Single (1993-1998) introduced the nuanced experience of single womanhood for women of color; Desperate Housewives (2004-2012) demonstrated that the plights of the Single City Girl was not restricted to single women living in the city.

Towards the end of the twentieth century, cable provided even more platforms for intersectional Single City Girls. MTV’s The Real World (1992) brought non-scripted co-habitation to the screen, and The L-Word (2004-2009) addressed the lives of lesbians living in Los Angeles. The Single City Girl archetype has also been marketed towards men with shows like Entourage (2004-2011) and Men of a Certain Age (2009-2011).

In each of these examples, the characters tackle the complexity of adulthood while negotiating hegemonic norms pertaining to gender, sexuality, class, and race. They are eager to fulfill the gendered adult role that they have been taught, but are navigating their own experiences and desires. Despite these progressive narratives that seek to disrupt discourse around these norms, the implicit goal in these programs is “have it all”: to find happiness via financial and romantic success, and to look good doing it. In series like Sex and the City and 30 Rock (2006-2013), the journeys of Carrie Bradshaw and Liz Lemon end with a wedding. 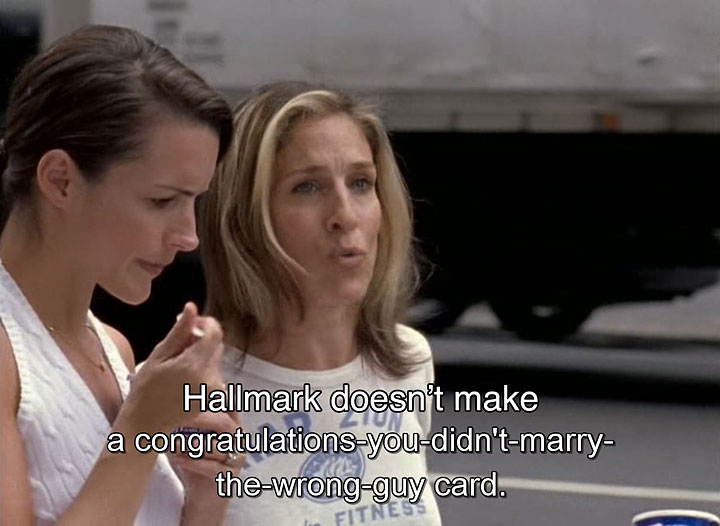 Carrie Bradshaw laments how difficult it is to “have it all”

Despite the evolution of the Single City Girl, Mary Richards still stands as a truly independent character. Smart, witty and career driven, Mary Richards resolved representational contradictions to create the perfect embodiment of new feminist values. At 30-years-old, she ends a two-year relationship with her boyfriend because of his commitment issues, and, when he attempts to reconcile at the end of the first episode, Mary refuses him, choosing the single city life and defining the direction of the program for the next seven years.

Mary Richards may have only had seven seasons of stories, but she continues to inspire those seeking to go against the grain. She was framed as a desirable and normal archetype, and one with whom the audience could empathize. In recent years, it is clear that the Single City Girl does not need to be single, living in a city, or a girl, and the internal contradictions of this character appears even more relevant as new producers and audiences emerge via social media. Twitter gives users the opportunity to create and broadcast their own Single City Girl personas, further engendering the expectation of personal and professional success as normal and expected for young American adults.

Image Credits:
1. Mindy Kaling in The Mindy Project, expressing herself as a Single City Girl
2. Carrie Bradshaw laments how difficult it is to “have it all”