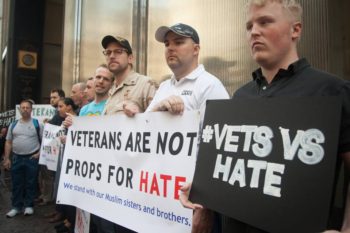 One interest group that gets little attention from academics, who is constantly trying to use, shift, and manage the narrative is that of military veterans. Because soldiers have been the direct tools of foreign policy and return home to become the rhetorical tools of domestic policy, they can act as the miners canary as they are usually one of the first effected by policy as well as act as a cautionary tool of bad policy. Furthermore, since 9/11 veterans carry a unique status throughout American society, their stories carry more political weight as all sides of the political spectrum try to utilize their commitment to veterans’ service as an act of measuring their patriotism. Organizations have long worked to manage and shift the narrative, and veteran activism is no stranger to this, from the veterans of WWI in the Bonus Army seeking benefits of their service to Vietnam Veterans of Vietnam Veterans Against the War who sought to end the US’s imperial war; all used their veteran status to show how the government was wrong, and they were often successful.

#VetsVsHate
As the summer of 2016 began, I was invited to participate in a progressive veterans leadership conference, put on by the organization Beyond the Choir. The three-day conference was a workshop to help build media skills useful for veteran activism. The main project that the organization was working on was a campaign called #VetsVsHate. It was a direct response to the violent and hateful rhetoric being used by Donald Trump, specifically, to combat Trump’s depiction of Muslim and Latino populations. The campaign took place primarily on social media forums Twitter and Facebook. The goal was to use our status as veterans to show that these populations are not the problem as we served with and fought along side people who identified as Muslim or as Latino. It did so through a number of tactics, primarily through signs that the veterans would hold denouncing Trump’s rhetoric and post these photos on social media sites with the hashtag #VetsVsHate. The organization would also send groups of veterans to Trump rallies to hold up protest signs. 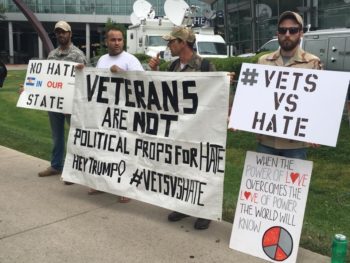 VetsVsHate protesting outside a Trump rally in Colorado Springs, CO.

One of the most interesting tactics we discussed at the conference was one called bird-dogging. This tactic was an interesting way to get public figures, primarily politicians, on record about particular issues. To do so a team of two will try to confront the target, one with a camera, the other asking questions. Using our subject position as veterans allows us a certain space and authority as politicians often feel obliged to take a moment for those they send off to war; they also feel obliged due to the camera because being seen blowing off a veteran could have political ramifications. The veteran then asks a series of questions trying to get the person on record for future public use in the media and to try and hold those politicians accountable. These tactics all heavily rely on narrative, or our stories as soldiers and veterans, because our stories influence policy makers, inspire the public, and have the power to dominate the political conversation, and sends waves throughout different media outlets.

Within the next few weeks we had begun planning a trip to protest Trump at the RNC in Cleveland. About twenty of us made the journey to the RNC to stand up against the bigotry and hate that we believed was being perpetuated by the Trump campaign. While there we had participated in a number of actions. The first was marching with a coalition of groups brought together by the new Poor People’s Campaign (a spin off the Civil Rights Movement organization). We also did a number of actions with the musical group Prophets of Rage, a spin off of the group Rage Against the Machine, which any word of their shows draws massive media attention. Our most impactful action though was when we teamed up with the organization Mijente. At this protest we had a couple of roles, first and foremost was to provide security for the migrant protestors, and secondly we joined their ranks and wore canvas walls that said, “Wall Off Trump.” This was one of the biggest protests to take place during the RNC and was highlighted by many mainstream and alternative media news sites. 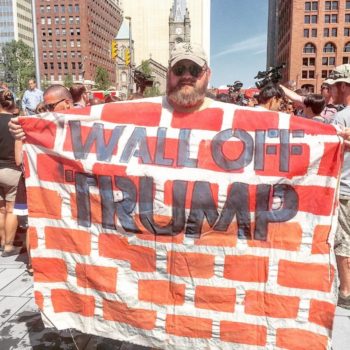 Me protesting Trump at the Republic National Convention in Cleveland, OH.

Throughout the rest of the election cycle the VetsVsHate group would continue to fight Trump and his rhetoric. The pinnacle of their attention came when Donald Trump attacked Muslim parents of an American soldier who lost their son in Iraq. #VetsVsHate would stage protests and news conferences outside Trump Towers, which gained media attention and constantly put Trump on the defensive from a powerful interest group. Many veterans felt that he not only lacked the foreign policy experience but was also lacked respect for the military, which puts our national security at risk.

Standing Rock
Before the election of President Obama it was fairly easy to organize for anti-war protests that I was heavily involved in; after his election it was like pulling teeth to get liberals involved in any sort of action that questioned Obama and his policies. Since the election of Donald Trump there has been a deep-seated fear amongst liberals that he will wind back the gears of progress to the pre-Civil Rights era. While in some ways this definitely seems to be what he is attempting to do, it has activated the left, possibly like no other time in history.

While the events surrounding the Dakota Access Pipeline (DAPL) are not necessarily about Trump, they do represent his ideology and the perpetuation of unbridled free market capitalism. The fight by the Standing Rock Sioux Tribe against the construction of DAPL slowly began to gain attention after the election ended; especially after the November 20th actions where police fired water cannons on peaceful “water protectors” in freezing weather, as well as the use of a host of other militarized gear that was more suited for foreign war zones than domestic peaceful prayer actions. Many had to be rushed to the hospital and at the time of this writing one girl may lose her arm due to the use of a concussion grenade by the police.

The use of all this militarized gear and tactics not only on American citizens, but more specifically on a group of people who have been oppressed since the arrival of European colonizers sparked outrage amongst many veterans. While I was up there it definitely reminded me of my time in Iraq as the North Dakota police forces and National Guard worked to protect the pipeline at all costs. This outrage sparked a Facebook group and GoFundMe page started by Wesley Clark Jr., a veteran and son of a famous military general, to mobilize veterans to ‘deploy to Standing Rock’ in order to stand with the water protectors. Over 2,000 veterans signed up to go to Standing Rock, which became the center of media attention across the country. Many believe that it was this action by veterans that pushed President Obama and his administration to deny the permits required for the DAPL project to continue. Though only time will tell if the denial of those permits matter, as they could either drill anyways and pay the fines or wait for Donald Trump to enter office, and since he has a financial interest in the pipeline he would likely push to have those permits granted.

After the Army Corps of Engineers denied the permits, most media outlets claimed that it was a victory, and that the fight was over; and less covered outside of social media was Energy Transfer Partners press release stating ‘that the denial of the permit was a political decision and that they would continue with the pipeline anyways.’ Thus, it would seem that while the Veteran movement temporarily helped to draw media attention to the NoDAPL movement, many believed the fight was over as the media has since moved on. 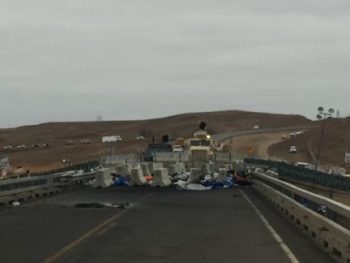 A militarized police checkpoint outside the Oceti Sakowin Camp near the Standing Rock Sioux Reservation, ND.

Conclusion
The next four years will no doubt be tumultuous, however I believe that we will see an increase in activism. On the front lines of that activism you will find veterans, fighting for the ideals of freedom and democracy, and continuing to uphold the constitution they swore to defend against enemies foreign and domestic. While soldiers are often used to maintain empire, the reflections of unjust wars can weigh heavy on veterans and retribution comes in doing what’s right and fighting the injustices that have never made America great. Much as Vietnam veterans shifted the media narrative of the anti-war movement in the 60’s & 70’s look to find today’s veterans working to shift the narrative for many different social justice movements Trump threatens today.