Laughter in the Age of Trump
Maggie Hennefeld / University of Minnesota 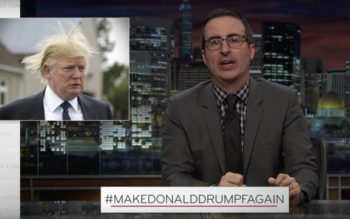 “It is frankly hard to believe there ever was a time when people thought a Trump candidacy would be funny, but there was such a time.”
–-John Oliver, Last Week Tonight, 11/7/2016.

In response to news reports that the reality TV star Donald Trump is considering a run for the White House: “Do it! Do it! Look at me! Do it!”
–John Oliver, The Daily Show, 6/10/2013.1

John Oliver’s satirical mea culpa on the eve of the 2016 elections has raised many urgent questions about laughter and its effects on American electoral politics. To what extent are comedy and laughter responsible for enabling Trump’s rise amid a pathologically entertaining political media landscape? From the incisive satire of programs like Full Frontal with Samantha Bee and John Oliver’s Last Week Tonight, to the sensationalist ridicule fueling Internet “fake news” click-bait and 24-hour cable news talking heads, cultural economies of laughter have become inextricably entangled with the very civic processes that will soon install a self-caricaturing clown and ludicrously unabashed huckster profiteer into the Oval Office. 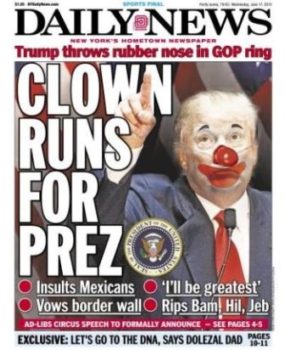 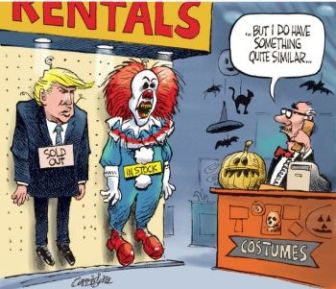 There is nothing wrong with using humor to lighten our burden—it’s going to be a long four years (at least). But now we need it to do more than that: we need to find a way to harness the edge of satire to repoliticize civic discourse in American society. For example, did you hear the one about the Western liberal democracy that democratically elected an unqualified, predatory, authoritarian demagogue and then potentially offered him unimpeded free reign over its eroded institutions and slanted checks and balances?

While liberal democracies enshrine the rights and freedoms of individual citizens, social democracies emphasize the power of collective institutions to protect the people from the ravenous excesses of individualist capitalism—to uphold the public services and civil liberties that we have come to associate with the social safety net. We know that these basic rights and programs are in massive jeopardy, and we do not kid ourselves by denying that this process has been underway for quite a long time. American culture in recent years has suffered from rampant depoliticization. Party politics have become spectator sports, exemplified by the “Super Bowl-sized ratings”2 of the 2016 Presidential Debates. 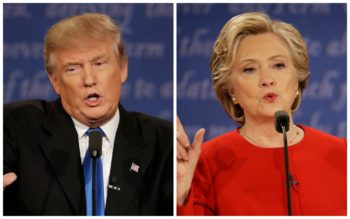 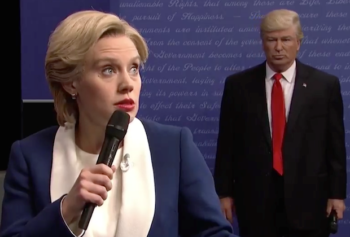 Why then, given our national addiction to political spectacle, did so many of us experience the outcome of the election as visceral shock—beyond the rational surprise due to bad polling data or to cultural incomprehension? There is no doubt that the news industry’s sprawling laughter machine helped pave the way for this feeling of collective liberal trauma. Trump’s election was less implausible than vividly unimaginable and unthinkable. This is the function of disavowal: when I say “I know, but all the same…” what I really mean is that I cannot imagine living with the burden of this thing that I profess to know. Laughter is a flourishing mechanism of disavowal. Our shock at the results of the election came not from a lack of belief, but from an excess of disbelief—a disavowal of something plausible but deeply unwanted that took shape through a media landscape fueled by incessant laughter and compulsive mockery.

Comedy, however spiteful, has always possessed a special power to reveal that the emperor has no clothes. Satire defeats fear with laughter. As Jon Stewart put it in a 2010 MSNBC interview with Rachel Maddow—about the destructive impact of news entertainment on journalistic standards—what “satire does best…is articulate an intangible feeling that people are having, bring it into focus, say you’re not alone. It’s a real feeling. It’s maybe even a positive feeling, a hopeful feeling.”3 Unlike the smug laughter of cynical disavowal, the stinging laughter of pointed satire can actively participate in transforming our perception of reality. Since reality is a construct—equal parts unknown trauma and Celebrity Apprentice—it is therefore ripe for the molding, and ours for the seizing.

What, then, is the place of laughter in an era of Trump—a notoriously thin-skinned authoritarian personality who litigiously cannot take a joke: who’s threatened to sue comedians including Bill Maher and Rosie O’Donnell for defamation of character? From his allegations of false reporting against The Onion, to his absurd Twitters wars as President-elect with the writers of Saturday Night Live and the cast of Hamilton, Trump literalizes the powers of satire. He cannot take a joke precisely because he is a joke.

But rather than purify our culture of the ubiquity of jokes (from “fake news,” to late-night satire, to cynical infotainment), let’s be rigorous about how we understand these jokes. It is a truism that humor is serious business: now it is more serious than ever. The Reichstag Fire of 2017 might very well come in the form of a preposterous Tweet or a reality television stunt. 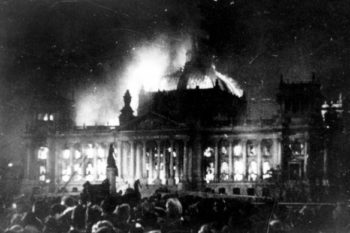 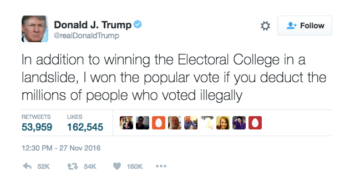 Beyond paying scrupulous attention to the politics of comedy, how else can we take back the edge of satire? As Samantha Bee once lampooned the G.O.P. obstructionism against diaper subsidies for poor working-class mothers, “Like it or not, there are a lot of poor babies. And it sounds like all you’ve [G.O.P. congressmen] got for them is the same useless advice you’re giving their mothers: Keep your legs crossed.”4 Sometimes a pithy joke is the most expedient language for articulating the complex realities of systemic injustice—and for exposing the crude and self-serving political games that perpetuate such inequalities.

The Trump era heralds a new frontier in the dialectic between subversive humor and authoritarian oppression. Despite Trump’s threats to “open up those libel laws,” satire will remain protected as free speech by the First Amendment of the U.S. Constitution (at least for now). In contrast, the official censorship and forceful monitoring of oppositional laughter is a hallmark of totalitarianism. Serbian grassroots humorist, Srdja Popovic, whose Otpor (i.e. “resistance”) movement helped spur the downfall of the brutal dictator Slobodan Milosevic, described his tactical use of illicit laughter to defeat terror and to incite popular resistance. He wrote in 2015: “Everyone agrees that funny trumps fearsome.”5 Popovic made use of a “smiling barrel,” a rusted tin barrel with Milosevic’s head painted across the front, which he allowed passersby in Belgrade to beat senseless for only 1 dinar per whack. 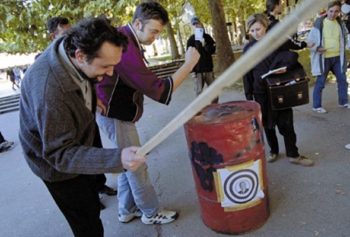 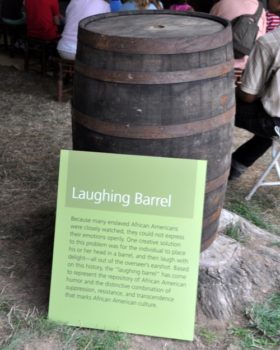 Having survived a very different system of institutionalized oppression, Ralph Ellison recounts the American legacy of the “laughing barrel”: both a physical barrel into which Black people unleashed their abjected laughs, and a repository for the history of African-American humor under slavery and Jim Crow. The “laughing barrel” was often placed at the center of the town square in the rural South, and offered one such space for laughing against racial tyranny and systemic injustice. As Ellison writes in “An Extravagance of Laughter,” “For by allowing us to laugh at that which is normally unlaughable, comedy…calms the clammy trembling that ensues when we pierce the veil of conventions that guard us from the basic absurdity of the human condition.”6

We need laughter now more than ever, but we need it to do more work than ever. Laughter pokes holes in the stilted orthodoxies, unquestioned dogmas, and overly earnest convictions that can permeate any ideological position—no matter how justified, authentic, or moral its claims. For example, since the election, there has been a troubling tendency to separate cultural issues from economic realities. This was the bait and switch that enabled a corporatist tycoon like Trump to appropriate the very real class anger of the 99% by pinning it on divisive cultural issues of identity, lifestyle and geography. He effectively stirred up the old bigotries to protect the excesses of ruthless capital. 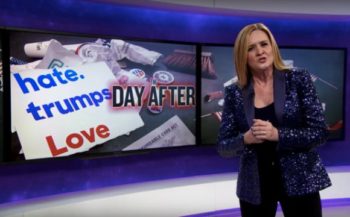 While “class politics” have inexplicably become shorthand for centering the rural or exurban white working-class, allusions to “identity politics” have been rampantly depoliticized. What exactly are the politics of identity politics? The problem is not with identity as such, but with its gradual depoliticization through the neoliberal language of diversity, multiculturalism, and personal responsibility (on the affirmative side) and of exclusion, intolerance, and injury (on the negative side). The urgent rhetoric of identity enfranchisement has effectively lost its grip on the political: the basis of social oppression and cultural discrimination in the erosion of civic rights and the unbridled escalation of class inequality. 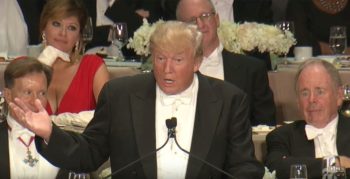 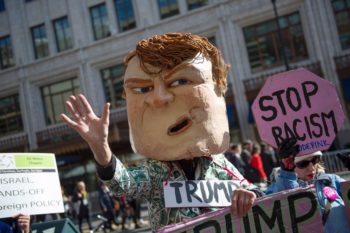 A bad joke come true, a jester-turned-sovereign, and now a clown without laughter, Donald Trump has also revealed a remarkable lack of facility with the language play necessary for wit and humor. Think of his volley of botched one-liners at the Al Smith dinner, which include “Here [Hillary] is tonight pretending not to hate Catholics”; “Hillary has believed that it takes a village…[especially] in places like Haiti where she has taken a number of them”; and “Hillary is so corrupt she got kicked off the Watergate commission.” (Womp womp womp.) As SNL vet and now Senator Al Franken (D-MN) has noted, “Donald Trump never laughs.”7 Lack of laughter notwithstanding, Trump does having a remarkable propensity for discrediting his political enemies as “laughable,” “a laughing stock” and “ridiculous,” on topics ranging from the Dakota Access Pipeline protests, to Russian election interference, to the status of critical news journalism.

Against Trump’s authoritarian laugh-less laughter, there now remain two possibilities for our counter-laughter: the cynical disavowal that displaces reality (until it comes back to smite us) and the transformative satire that changes the rules of reality. Humor thrives in the realm of ambiguity, multiple meaning, and radical improvisation. Whatever revolution we wage on the ground, in the classroom, through our social media networks, and towards the voting booths, it cannot—it must not—exclude the critical analysis and imaginative practice of comedy.