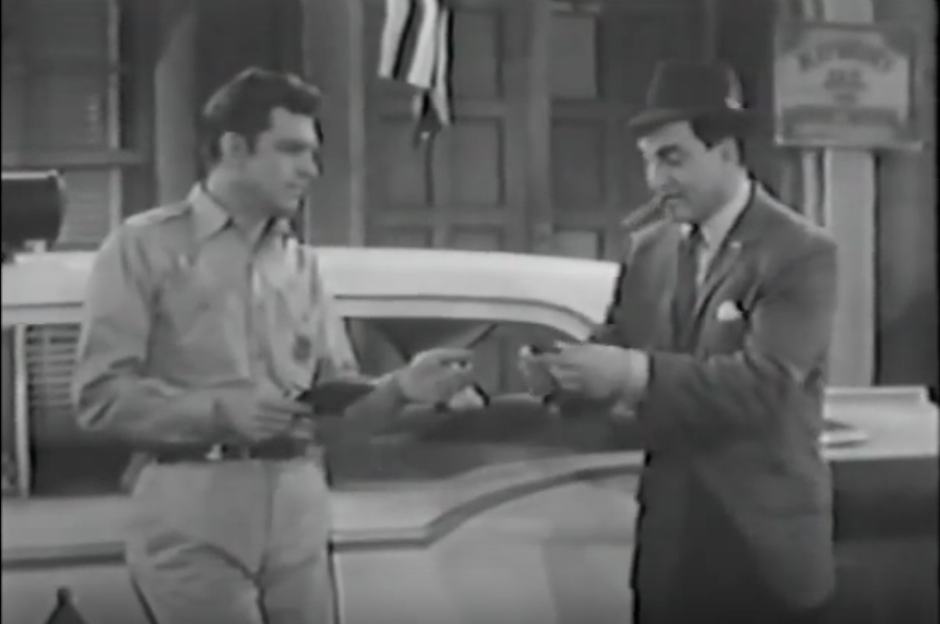 A still from the Make Room for Daddy episode “Danny Meets Andy Griffith.”

Andy Griffith was not CBS’s first attempt at setting a primetime show in the South. Earlier efforts included the pre-emptively canceled Confederate-drama The Gray Ghost (1954) and the season-long Reconstruction-era western Yancy Derringer (1958-1959). But it was the network’s first successful attempt to feature the South in primetime. The region had, before Andy Griffith, posed concerns for networks and advertisers, worried about offending and alienating white Southern audiences with racially progressive television, or even with programs that appeared to critique the racism vividly on display in Civil Rights news broadcasts. [2 ]

Central to communicating the terror and violence of the white South were a series of Southern sheriffs featured on nightly news broadcasts [3 ] . These men were versions of the same model–sweaty, overweight, angry, and ill-spoken types with deep Southern drawls. Their image came to stand for all that was wrong, terrifying, and violent about the region. As Allison Graham and Sharon Monteith note, by 1963, “nationally and internationally circulated images of [Birmingham, Alabama] city police commissioner Bull Connor worked as cultural shorthand, communicating within seconds the reasons for black protests and the kind of violent resistance that would meet them” [4 ] . These images, which allowed a national audience to see “glimpses of the brutality black citizens had lived with for over a century,” suggested that racism had a particular look and feel and was the fault of a few individual bad men, rather than a systemic problem. [5 ]

It is within this violent context that Andy Griffith premiered. The tensions and discomforts of representing the South construct Andy and the sitcom’s whitewashed world from the outset. “Danny Meets Andy Griffith” featured Danny (Danny Thomas) and his family traveling through the rural South by car. [6 ] The episode begins as Danny pulls into town behind Sheriff Andy’s police car after Andy has pulled him over for running a stop sign. Danny is frantic and fast-talking with a thick New York accent. Andy moves and speaks more slowly. He takes Danny’s insults as they come, from calling Andy “hayseed” to mocking Andy’s Southern drawl and asserting that the stop sign is a tourist trap meant to trick poor visiting “city slickers” like himself. He even calls Andy the “Jesse James of the police.” Danny insists on pleading his case in front of the justice of the peace (who, of course, happens to be Andy), sure that his Northern rationality will win out. After all, Danny exclaims, “who’s heard of a stop sign with no road.”

Even as Danny insults Andy and the town of Mayberry, Andy remains calm and level-headed. He responds to Danny’s quick-talking outrage with logic and reason. Facing the camera and Danny’s children–and by proxy, the viewers–he explains that, indeed, the town did vote to put in a road six years ago but they’ve only raised enough money for a stop sign. Andy’s calm and fair demeanor renders Danny’s complaints, insults, and his assertion that he’s been duped ridiculous. Against Danny’s Northern brashness and the slew of Southern stereotypes he unleashes–which includes a claim that Andy probably doesn’t even know about television–Andy is calm, kind, and patient, not to mention, handsome. In fact, Andy is as far from a lawless Jesse James as one could possibly imagine.

Like earlier renditions of the police on television–for instance, Joe Friday of Dragnet–Andy’s appearance and mannerisms signal his moral fortitude and trustworthiness. Andy’s patience is epic, and even comic when juxtaposed against Danny’s small-mindedness about him and the South. Through their exchanges, Andy comes across as rational and fair-minded, while Danny appears childlike and petulant. Like Joe Friday and the police of 1950s procedurals, who as Jason Mittell asserts were “part of [the] social order…not to be questioned—at least not on mainstream television,” Andy’s presence as sheriff, justice of the peace, and jailer, carries the same authority [7 ] . Thus, when Andy charges Danny with $100 and ten days in jail for running a stop sign, we mostly feel empathy for Andy, who has to tolerate Danny’s rudeness, even as we know this punishment is perhaps excessive (and won’t be enforced).

Furthermore, Danny’s subsequent stint in jail is comfort-laden: home-cooked meals from Aunt Bee (Frances Bavier) and a cell door that doesn’t lock. The jail, the pilot suggests, can’t possibly be so bad, when citizens of Mayberry even voluntarily commit themselves to prison. As Danny stands and protests Andy’s position as the all-around law in these parts, a drunk older man stumbles in from the background and ambles up to Andy’s desk, declaring himself “under arrest.” The camera follows him as he locks himself into a cell, the next shot revealing a close-up of Danny and Margaret’s (Jean Hagen) confused expressions. 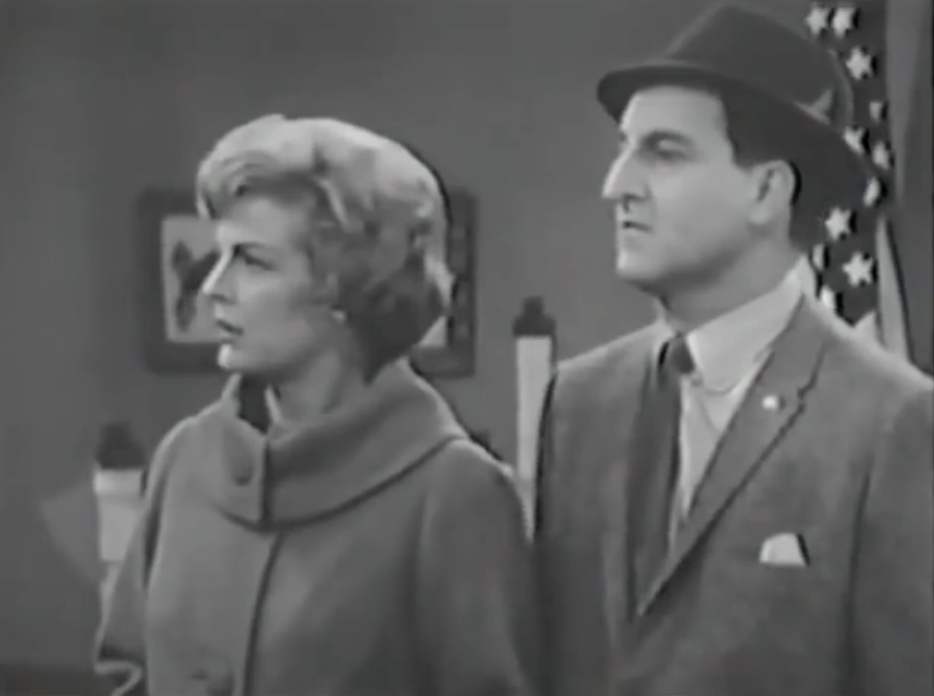 Danny and Margaret react to the man jailing himself.

At the height of Civil Rights violence and its attendant news coverage, Andy Griffith suggested an entirely different and virtually opposite vision of the white South, where even jails were friendly, despite nightly news reports providing clear evidence to the contrary. If, as Stuart Hall attests, “representation is a practice, a kind of ‘work,’ which uses material objects and effects,” where “the meaning depends, not on the material quality of a thing, but on its symbolic function,” then re-making the white Southern sheriff in the midst of civil rights news coverage on an entirely white sitcom worked to smooth over and re-imagine the symbolic function of Southern law enforcement, and by extension, the region [8 ] . Where the Southern sheriff by 1960 signaled all that was horrific and violent about the South, the pilot of Andy Griffith upends this image to envision both the Southern sheriff and Southern law enforcement more broadly as kind, compassionate, and above all fair. After all, Andy doesn’t even carry a gun and instead carries out Mayberry’s justice system with a gentle paternal touch. 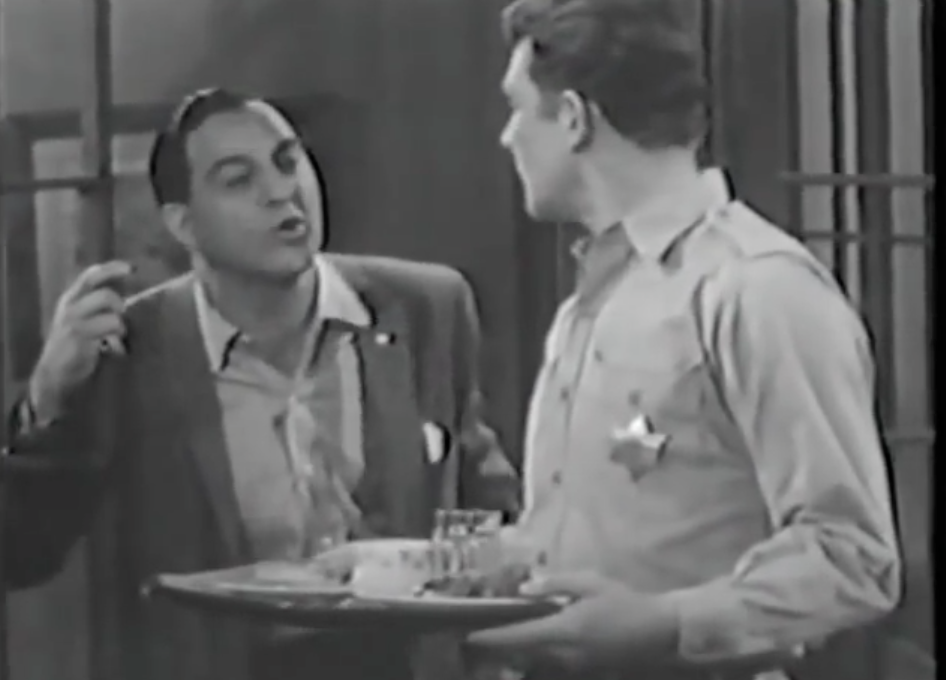 The set of complex and conflicting representational maneuvers enacted in “Danny Meets Andy Griffith” to re-make the South as safe provides a sustained example of how ideas about the police were tethered to ideas about America. This narrative smoothed over and obscured the cracks in the legal and political system which the Civil Rights Movement made glaringly visible. Notions of the police as the moral center still persist in contemporary pop culture and in many primetime police procedurals, from Law & Order to Major Crimes, Bones, Elementary, and the recently canceled Castle, to name just a few. More often than not, even when a corrupt cop plot arises, the episode resolves with the bad officer being jailed, killed, or at least dismissed. This plot device suggests that it is not the police system that is corrupt, but rather that bad policing is caused by bad individuals.

We must pay attention to contesting narratives, more often than not caught on tape, about systemic police violence–from the death of Sandra Bland in police custody to the murders of Tamir Rice, Michael Brown, Eric Garner, Philando Castille, Alton Sterling, and too many more. Looking back at “Danny Meets Andy Griffith,” we can see how the episode mocked racism and the attendant violence supported, enacted, and often condoned by Southern law enforcement. This vision was extremely effective in making the South safe for primetime viewers: Andy Griffith became one of the most successful television shows to ever air. The pilot, then, reminds us that police representations in popular culture still serve a dangerous ideological purpose that must be questioned, historicized, and, ultimately, re-imagined.