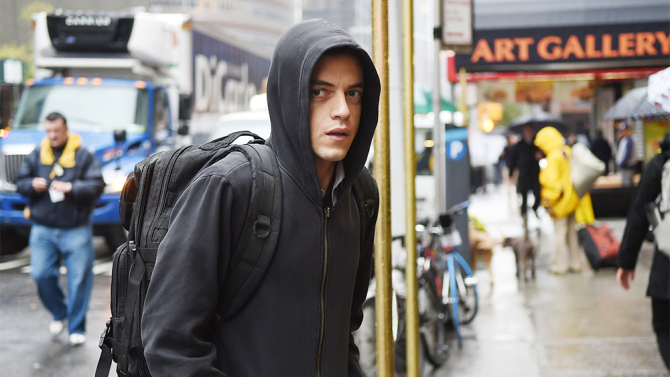 The USA Network’s new summer series, Mr. Robot knows its media history. It’s filled with hidden references (see, for example, Sarah Bunting’s discussion of Mr. Robot’s relationships to Ocean’s 11, The Wire, and Hannibal). [1 ] I want to focus here on two specific debts it owes – the first to The Matrix (1999); the second, to the 1949 classic, The Third Man. It’s the mix of the two that really gives Mr. Robot its particular complexity.

The Matrix, of course, has exerted enormous influence in film and television over the last sixteen years, or rather pop culture’s brand of postmodernism has exerted enormous influence, since The Matrix (and, in fact, The Truman Show, which came out at roughly the same time) is, at its heart, a parable of postmodernism. Movies including Inception, Stranger than Fiction, Avatar, Insidious, Wall-E, all owe a debt to Neo and Morpheus and the artificial reality they inhabit. Lately, the same sorts of worlds have been cropping up on television as well. Wayward Pines, in which we discover a small town is not quite what it seems, offers one good example. Meanwhile, in this season of The Dome, the characters have spent some time living lives that turned out to be only virtual.

Mr. Robot’s references to The Matrix have less to do with plot and more with attitude. The green camera filter, for instance, tints everything to roughly the same computer-code-color as The Matrix. Some of the language echoes the Wachowski’s dialogue as well. In his first conversation with Elliot Alderson (note the last name), the mysterious Mr. Robot (played by Christian Slater) sounds very much like Morpheus reassuring the newly reborn Neo: “Obviously you’re going to ask a lot of questions. It’s weird what you’re doing right now. But I can’t tell you anything until we get there.” Later, he promises: “I’m gonna break you out.” And still later, he begins to reveal a bit more about the “truth”: “Let me tell you why you’re really here. You’re here because you sense something wrong with the world. Something you can’t explain. But you know it controls you and everyone you care about.” [2 ] Like “a splinter in the mind” perhaps? And in an interview for Google, creator Sam Esmail readily admits, “You can say I ripped the lines off […] I’m a huge Matrix fan.”

This new version, however, twists the “things aren’t what they seem” motif of The Matrix: this Alderson, like that earlier Anderson, is a gifted hacker, but he finds himself caught up in a real computer-generated network. That is, the network in this case isn’t virtual. Except that’s not strictly accurate either: the virtual and the “real” exist as one, a situation that more closely resembles how postmodern theorists like Jean Baudrillard saw the world. Literally living inside a computer construct makes for a handy metaphor, but these thinkers saw our world – not some futuristic post-apocalyptic world – as the true Matrix. “Living in the computer” in these terms isn’t about learning to stop bullets; instead, it means texting your friends across the country while ignoring the people sitting next to you; it means walking around with your own soundtrack (courtesy of iPod) playing in your ears; it means being exposed to so many images that your reality only exists as a collage of these images.

Mr. Robot shows us the corporations that generate these images and the complex web of computer systems that weave these corporations into a virtual world that both underlies and overshadows the “real” world. It offers us characters shaped by that artificiality – Elliot, so deeply enmeshed in this world that he seems himself robotic; or Martin Wallstrom, who seems to have been made psychotic by having constantly to split his personality between the underworld of the computer system and its glittering corporate façade. This is not the world even while it very much is the world.

Part of the show’s complication of The Matrix‘s themes has to do with its debt to another, less obvious, source: Carol Reed’s brilliant noir classic, The Third Man. Without getting too enmeshed in that film’s complex plot, it concerns Holly Martins, recently arrived in post-war Berlin to discover his old friend, Harry Lime, has become embroiled in black market racketeering. Harry, it seems, has committed a number of rather vicious frauds, one of which involves selling tainted batches of penicillin to orphanages. The crux of the film occurs, rather famously, in a Ferris wheel compartment. There, Martins asks his old friend, bewildered, “Have you ever visited the children’s hospital? Have you seen any of your victims?” to which Harry replies, “Victims? Don’t be melodramatic, Holly. Look down there. Would you really feel any pity if one of those dots stopped moving—forever? If I said you could have twenty thousand pounds for every dot that stops, would you really, old man, tell me to keep my money—without hesitation? Or would you calculate how many dots you could afford to spare?” [3 ] 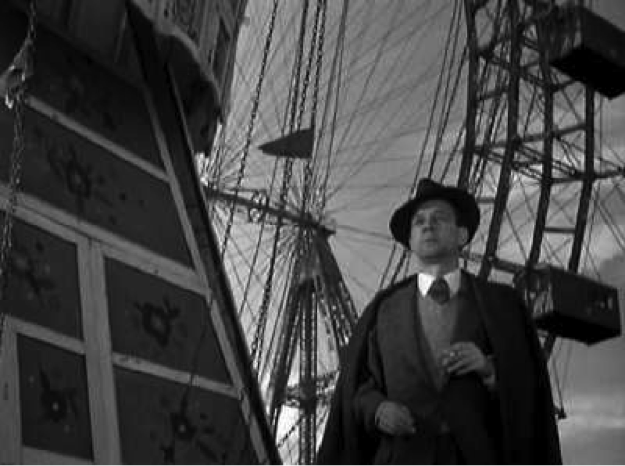 Holly Martens at the Ferris Wheel

But Harry continues with one of the most famous speeches in all of cinema: “Don’t be so gloomy. After all it’s not that awful. Like the fella says, in Italy for 30 years under the Borgias they had warfare, terror, murder, and bloodshed, but they produced Michelangelo, Leonardo da Vinci, and the Renaissance. In Switzerland they had brotherly love – they had 500 years of democracy and peace, and what did that produce? The cuckoo clock.” [4 ]

Lime’s point here about beauty springing from horrific circumstances gets echoed in another Ferris wheel scene, this one from the first episode of Mr. Robot. Here, Mr. Robot entices Elliot with a proposition:


“Money. Money hasn’t been real since we got off the gold standard. It’s become virtual. Software: the operating system of our world […] We are on the verge of taking down this virtual reality. Think about it. What if you could take down one conglomerate, a conglomerate so deeply entrenched in the world’s economy. Too big to fail doesn’t even come close to describing it. […] What if I told you that this conglomerate just so happens to own 70% of the global consumer credit industry? If we hit their data center just right we could systematically format all the servers, including back up. […] All the debt we owe them. Every record of every credit card, loan, and mortgage would be wiped clean. It would impossible to enforce outdated paper records. It would all be gone. The single biggest incident of wealth redistribution in history.” [5 ]

Here Mr. Robot’s speech borrows pieces of both Morpheus and Lime, “one conglomerate” and “What if I told you” echoing Harry’s temptation of Holly with the “one dot” below. 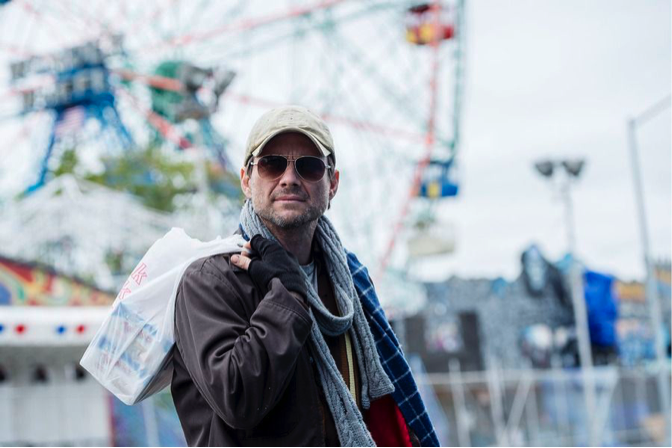 Mr. Robot at the Ferris Wheel

The Matrix is brilliant in many ways, especially its crucial head-turning moment when reality becomes something entirely different (a moment important enough to influence Inception, Stranger than Fiction, et.al.). Its morality, on the other hand, is overly simplistic: computers bad! humanity good! This wasn’t quite the point Baudrillard had been driving at. The postmodern condition isn’t a philosophical proposition, an ideological argument for how we should or shouldn’t live. It’s a description of things as they are. And things as they are aren’t good or evil – they simply are.

The genius of Mr. Robot is that it complicates that simple morality. Mr. Robot offers a proposition that sounds an awful lot like the one Morpheus offers to Neo: open your eyes, see the world for what it is, and fight to get the reality back. At the same time, it’s couched in the disconcerting morality of Harry Lime: “so a few people get hurt; in the end it’s all to the greater good.” The system, it turns out, is more complicated than we might imagine – it traps us, to be sure, but we must always remember we are at least passive participants. We like our video games, our designer drugs, our internet porn. Taking down the system means taking down ourselves.

It must be said that the Wachowskis did have something like this complexity in mind when they made the second and third parts of their trilogy. We learn in The Matrix: Reloaded, for instance, that the computer encourages occasional revolution. Unfortunately, if Neo wasn’t heroically defeating the system the audience found the plot less engaging. The other part of Mr. Robot’s genius – at least I hope – is that they’ve discovered a way to make this complexity resonate more strongly with the audience. Or perhaps – another hope – we have grown more sophisticated in our understanding of the postmodern world around us.