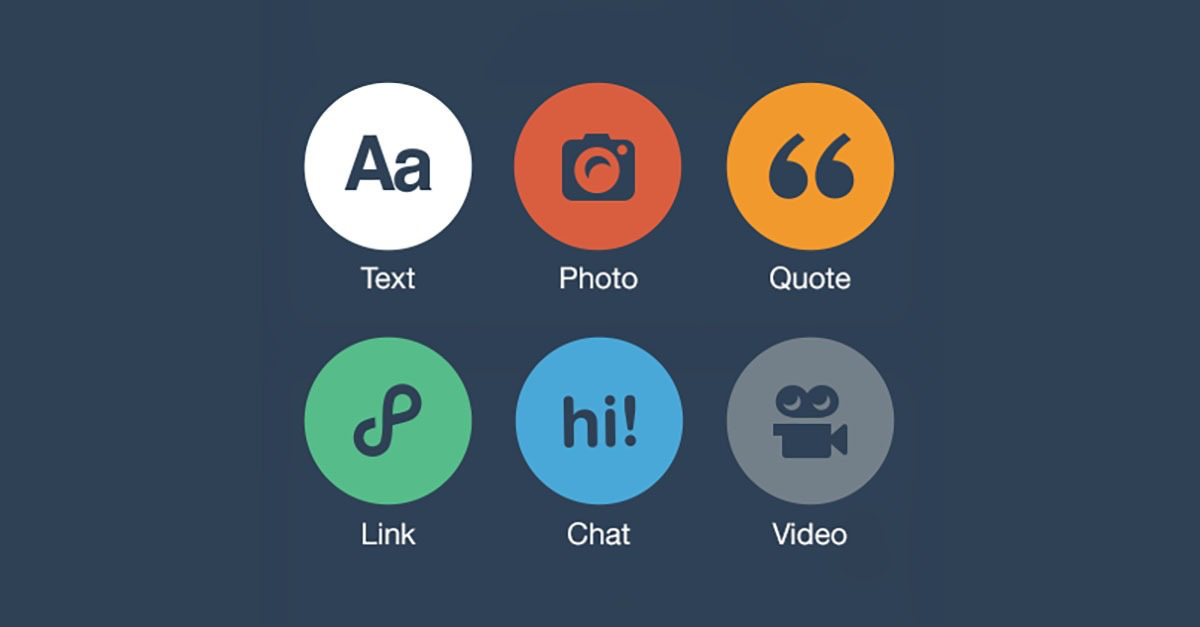 As fan communities shift their favored interfaces, the tenor of fan communication and creativity changes. Fans may choose interfaces because they better fit the mood of a particular fandom or the evolving aesthetics and foci of the larger multifannish culture, but at the same time, fan aesthetic traditions evolve in response to the affordances and limitations of particular interfaces. Kristina Busse and I wrote about this a while back now, in our essay “Limit Play,” specifically focusing on Livejournal and LiveJournal specific forms such as the 100by100 pixel icon and comment tree fan fiction, which as forms celebrate and depend upon the constraining limits of the LiveJournal interface. [1]

The favored interfaces and resulting evolving aesthetics of contemporary fan culture are perhaps harder to pin down. LiveJournal and Dreamwidth still offer the same frames for creativity as LJ did back in the early 2000s. But the ubiquity of fan culture on the visual microblogging site Tumblr, and also the introduction of other interfaces, such as the music streaming site 8tracks, highlight an aesthetic of abundant multiplicity and multidirectional flow. Perhaps this is most clearly seen in Tumblr’s “infinite scrolling.” Where the interface limitations of Tumblr are many, and can make it feel very opaque and confusing to newcomers, at the same time Tumblr conveys a sensation of limitlessness; no need to click on an arrow or the word “next” to see what else fans have created, just keep scrolling and the Tumblr posts keep coming; (although there may indeed be a limit to how much we can take in as we endlessly scroll…) Likewise, 8tracks, while showcasing fan-created playlists of often 8-15 songs, autoplays from one playlist to the next, and after the first play of a given playlist, shuffles order of the songs (for licensing reasons), thus presenting any single playlist in infinite combination.

In this post I examine two aesthetic forms that have evolved within this interface emphasis on multiplicitous plentitude: the gifset and the fanmix. These fan aesthetic forms did not emerge from nowhere; that is, they’ve evolved out of already existing fan practices, and it is useful to think of them both in relation to previous fan creative traditions and as evolving forms of fan authorship in their own right.

Let’s start with gifsets: sets of images, sometimes animated, sometimes not, arranged in a grid of sorts to communicate as a whole. Fandom gifsets as a form have evolved primarily on Tumblr, where the interface allows for easy juxtaposition of multiple animated or still gifs. Fans use Photoshop and other image editing tools to make gifs, which they then upload to Tumblr to create gifsets. Various mobile device apps also facilitate gif and gif collage creation, meaning that fans can create gifsets on their computer, phone, or mobile device.

Gifsets that incorporate lyrics have a clear corollary in the practices of fan vidding. Indeed, these gifsets with lyric overlays function much like early vids that used still images edited to follow one another against a song’s audio background, with editing choices usually driven by the progression of the lyrics. But moreover, I’d argue that fan gifsets in general can be usefully read through the lens of vidding in the sense that, like vidding, they select particular moments from the source text, some highly recognizable, some not, and recontextualize them among one another, in so doing revealing or establishing new visual and thematic patterns, offering distilled readings or new meanings born of new contexts and juxtapositions. [2] From this perspective, gifsets are like little minivids minus the musical track, played out across space rather than (or as well as) time. Gifsets that incorporate lyrics introduce the imagined shared audio of the song that the lyrics come from, provided the lyrics and song are familiar to the viewer. For example, Darlingbenny’s “Some Nights…” includes only two still images, both of Martin Freeman’s John Watson looking distressed at his desk, overlayed upon which are simple white capital font with lyrics from Fun’s “Some Nights”: “But I still Wake up/I Still See Your Ghost.”

With a relatively succinct visual and textual economy, this Gifset references a particular moment—when John thinks Sherlock is dead following the events of Sherlock’s “The Reichenbach Fall.” Rather than reproducing extensive lyrics and a complex play of associations, this gifset asks us to activate through memory the full emotional source of Fun’s “Some Nights” through minimal citation of lyrics, and also focuses our interpretation through the small selection of lyrics included. Typography is obviously important to this form, for gifsets create meaning not only through the presence of the words themselves, but also through the aesthetic choices of font style, size, color, opacity, and positioning. In this case, the minimalist modern white caps (accompanying as it does the desaturated almost black and white images) uphold the quick impact of this gifset.

Other gifsets sprawl further in their visual and verbal associations, with perhaps more extensive quoting of lyrics, or the inclusion of many more images. Some gifsets combine multiple visual sources together, weaving them through juxtaposition into one universe, or highlighting their commonalities or differences (thematic or visual). Sometimes, multifandom gifsets incorporate lyrics to render their comparative interpretation, and sometimes the audio invoked through lyrics (or even through image) is in itself the fannish object. For example, these West Wing/Hamilton gifsets layer Hamilton lyrics over West Wing imagery, or West Wing dialogue over Hamilton imagery, cumulatively orchestrating a multimodal conversation between these two fannishly beloved sources that represent American political issues and history.

Like gifsets, fanmixes have the potential to evoke associations narrow and broad, through audio and visual combination, and like gifsets, fanmixes in their current evolving form reflect the changing tenor of fan culture and the interfaces fans are currently deploying. First, a brief definition: fanmixes are fan musical playlists dedicated to a series, character, relationship, or sometimes to a particular fan-authored universe or fanwork. Fanmixes are like the inverse of lyric gifsets. Where gifsets ask you to recall and superimpose the remembered internal audio on the imagery, fanmixes and playlists ask the listener to bring their recollection of the visuals, narrative, storyworld, and characters to their listening of a given fanmix. In both cases, gifsets and fanmixes can encourage a conversation between the fan-beloved source and other media texts, fannish and non. [3]

In the past, fanmixes were predominantly shared in locked communities like those on Dreamwidth and LiveJournal, where fanmix authors provided links to (or sometimes direct downloads to) the music in their playlist, in combination with album cover art and sometimes snippets of lyrics or even fanfic. The locked communities offered perceived protection from the copyright issues involved in remixing and redistributing full songs. Fans also distributed fanmixes in the form of lists of songs and album art without the songs themselves, so that the playlist existed as a map or instructions for the potential listener to create the audio flow themselves.

However, these fanmix distribution practices are increasingly being replaced by fans’ use of newer interfaces for creating “playlists” on line, using sites like the fan-popular 8Tracks. This shift in interface impacts the fanmix as a form. Previously meaning was in significant part constructed by the flow of the mix, with the order of songs potentially telling a story or progressing an arc. However, with the popularity of 8tracks as home for fanmixes, the importance of a playlist’s linear architecture has shifted; any mix on 8tracks is destined to be auto-remixed, so to speak, that is, played in a different order for licensing reasons after the first playing of the mix. So if a fanmix track author has an intent regarding the build of the songs, they craft it knowing that hearing the mix in that order will be an ephemeral and limited experience, and that the playlist must/will also communicate meaning in its cumulation and any accompanying art and author notes. 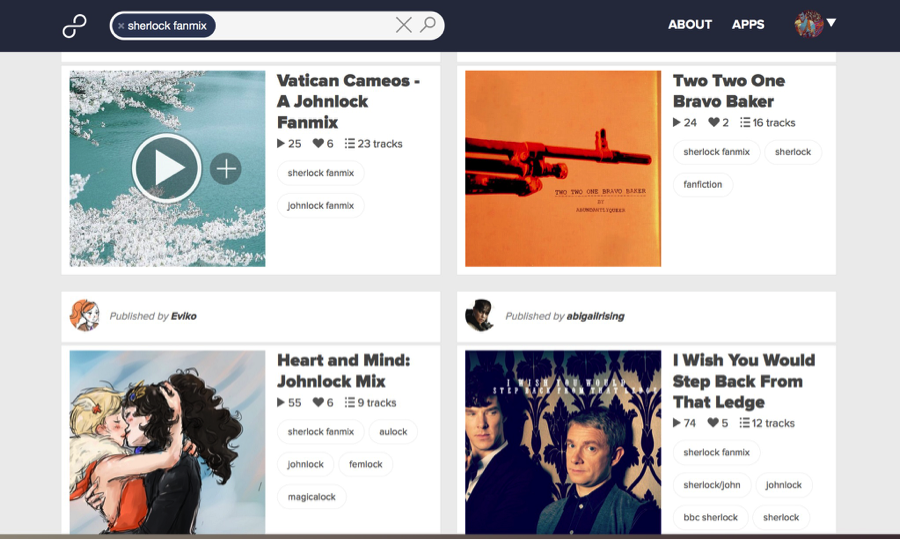 Where the order of the songs cannot be assumed as a constant in this new version of the fanmix, album art imagery, author notes, hashtags and resulting recommendations on 8tracks further offer interpretative frame, identifying not only the fandom but pairing (The Unexpected Romance of Sherlock and Molly), character (Morstran), tone and genre (Teen!Lock), and perhaps even particular fan fiction universe invoked (The Paradox Series: The Soundtrack). As with gifsets, the order of edited songs matters less than the cumulative impression of the juxtaposition and synthesis, and the overall impact of the playlist as it can be (and if you love it, likely will be) played over and over again, sometimes within a longer flow of favorited playlists, other times on its own as a singular (albeit also multiplicitous) object.

And yet, the fan desire for control of the creative dimension inherent in song ordering still remains, as articulated by the fanmixer morethanonepage: “For me, putting the songs in the ‘right’ order is just as important as picking them.” [4] Fanmixes, perhaps with order delineated but playback not, come to join gifsets in the infinite scrolling of Tumblr, where they together commingle with creative forms from other fandoms, and alongside images and memes and conversations that we might not label as fannish at all. These larger contexts, and the individual ways in which they are experienced by particular users and fans, also determine the evolving aesthetic forms of fan works.