May 19, 2015 Carolyn Birdsall / University of Amsterdam Leave a comment 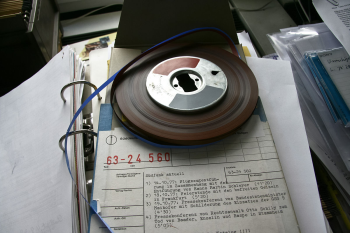 In 2005, Michele Hilmes titled a review: “Is There a Field Called Sound Culture Studies? And Does It Matter?” In this essay, Hilmes described a new research agenda that no longer limited its understanding of sound to particular media or as one of the components within media representations. In Hilmes’ words, this scholarship in sound studies of the early 2000s had worked to: “redefine it less as the study of sound itself, or as practices of aurality within a particular industry or field, than of the cultural contexts out of which sound media emerged and which they in turn work to create: sound culture.”1

Ten years after these observations were first made, a surge of activity in sound studies is in evidence: from readers, handbooks, journals and professional organizations to a host of festivals, exhibitions, blogs and educational programs. Radio scholars like Hilmes, too, have become increasingly interested in sound studies approaches to broadcast history, even though radio has remained in the margins of much of this research2 . Where Hilmes’ review reflected on a noticeable trend in scholarship, this Flow post will discuss the possibility of imagining a field that does not yet exist: Radio Preservation Studies.

Which precedents can be identified? By now, there is a distinct and thriving field that has come to be known as Film Preservation Studies. While defined by its ongoing investment in developing preservation techniques, the field is informed by exchange between film archival history, policy, theory and praxis. An early impulse for the field was the establishment of the International Federation of Film Archives (FIAF) in 1938, as a joint effort between institutional partners from the US, UK, France and Germany. These founding institutions promoted a range of different approaches to film archiving, with varied emphasis on access and preservation.3

Film Preservation Studies is significant in that we can observe a sustained reflection on preservation methods, institutions and infrastructures. The field is also attentive to ways in which films are re-constituted in formal practices of restoration, archiving, exhibition and distribution as well in the public’s engagement with forms of digital access, museum presentation, creative re-use, re-mixing and DIY archiving.4 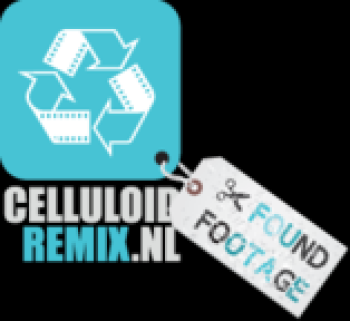 Celluloid Remix for the creative re-use of film heritage

In radio studies, the archive has tended to be a source rather than a primary object of study. Until now, the theme of sound archiving and preservation has only been marginally thematised in relation to European broadcast systems.5 On the whole, however, the role of the archive and sound archiving practice has not been the subject of investigation in any major radio history, whether in past institutional histories (for example, the multi-volume studies by Erik Barnouw and Asa Briggs) or more recent social and cultural histories.6 When the history of sound recording in radio has been acknowledged, it is either not connected to the archive or only discussed in relation to specific program formats.

One interesting exception is the portal Archive Pioneers: Saviours of Sound at the BBC, which explicitly thematizes the history of sound recording and archiving practices from the mid-1930s onwards.7 This site includes spoken interviews with BBC technicians, program makers and archivists such as Marie Slocombe and Ludwig Koch. Such public history initiatives are a welcome development, since the portal provides online access to recorded sound, images and texts that address some of the ways in which recorded sound was historically perceived and used in British broadcasting. The site also draws the public’s attention to the status of particular archival records in the collection (e.g. bird recordings vs. famous speeches), and to historical developments in recording technology and production practice. And, importantly, it serves as a reminder that radio preservation projects should not only ‘follow the sound’, but reveal how sound in broadcasting was constituted in relation to other, print-based records, such as internal correspondence, memos, scripts, program guides or photos.8 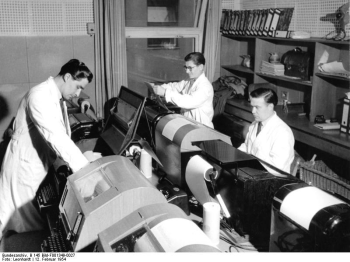 Why should broadcast scholars care about preservation? One of the most compelling arguments is that, from its earliest years, there has been a strong preoccupation of radio producers (and consumers) with not only the live qualities of wireless transmission, but also the possibility to record and re-use these ephemeral sounds. From the 1920s onwards, the increasing use of recorded sounds established recording and archival practices as central components in what radio sounded like for its listeners. Such practices not only suggest an overall influence on aesthetic changes in radio sound and programming, but require scholars to reconsider the co-constituting role of the archive in radio production.9

While various practices of collecting, ordering and re-using sound have been central to program production, there is a key difference between film and broadcast archives. Recordings held in broadcast archives today are closely linked to the production context and the needs of program makers, yet they are disconnected from the original domestic context in which broadcast sound was received. Indeed, while broadcast reception was one of the defining and ubiquitous experiences of twentieth century modernity, the sounds emitted via receivers leave few traces in the archive. Sound archival records, moreover, are often the product of multiple transfers and re-recording, and should be understood as the product of “phonomanipulation” techniques and acts of “reading sound.”10 On the whole, the existence of many radio recordings are connected to the demands of program production, rather than historical documentation or preservation concerns. 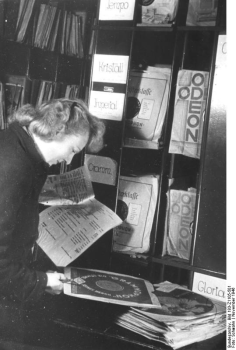 The Radio Preservation Task Force (RPTF) meeting and conference in early 2016 will offer its participants a forum to pool resources and exchange information. At the same time, it represents an invaluable opportunity for scholars, archivists, policymakers and broadcasters to develop a shared field of inquiry devoted to radio preservation.11 Currently, the RPTF members are endeavoring to compile information on sound collections connected to radio stations across all U.S. states. On this basis, collective efforts will be made to identify the most important and urgent materials for digital preservation. One of the challenges for the RPTF will be to develop comparative perspectives within and beyond the U.S. context, which is related to a concern articulated by Hilmes about sound studies publications in the 2000s:

“[I]f our investigations of sound – surely one of the most elusive and boundary-defying media of all – is to be kept strictly within national borders, we will not only miss out on much that might add to our discussion, but we will build on a tendency to think that the specific ways that sound culture developed in the United States are somehow necessary and natural. […] We should be careful not to do with the variables of sound culture what has been done to sound generally in this visual age: create a seemingly transhistorical, transcultural essentialism that is actually predicated closely on an American model.”12

In these reflections on sound studies, Hilmes draws an analogy with radio. Scholars most familiar with U.S. radio history, Hilmes reminds us, should endeavour to make sense of other cultural impulses and models for the production, distribution and reception of radio. The European traditions of radio art and experimental radio traditions are given as an illustrative case in point for such variables in sound culture, let alone historical developments in radio sound preservation.13

As such, Radio Preservation Studies will be required to reflect on the diversity of engagements with radio, but also the ongoing exclusions created within broadcasting and through normative ideas of radio heritage.14 Attention may be directed to different types of radio (e.g. community, commercial, state-funded), and alternative models (e.g. pirate radio, closed-circuit radio, peer-to-peer practices). Radio archiving and preservation has also been constituted differently in organizations representing the civic, regional, federal and transnational (e.g. EBU, IBU). In order to fully address past and future preservation issues, this new field will necessarily continue in the interdisciplinary vein of radio studies, and will surely benefit from insights from archive and library studies, public history, heritage studies, museology and curation studies, memory studies, material culture studies, media archaeology, technology history and critical production studies. Without a doubt, Radio Preservation Studies still needs to be fully conceived and articulated. Yet not unlike the enthusiasm for sound studies a decade ago, radio preservation studies is a long overdue and promising new direction.