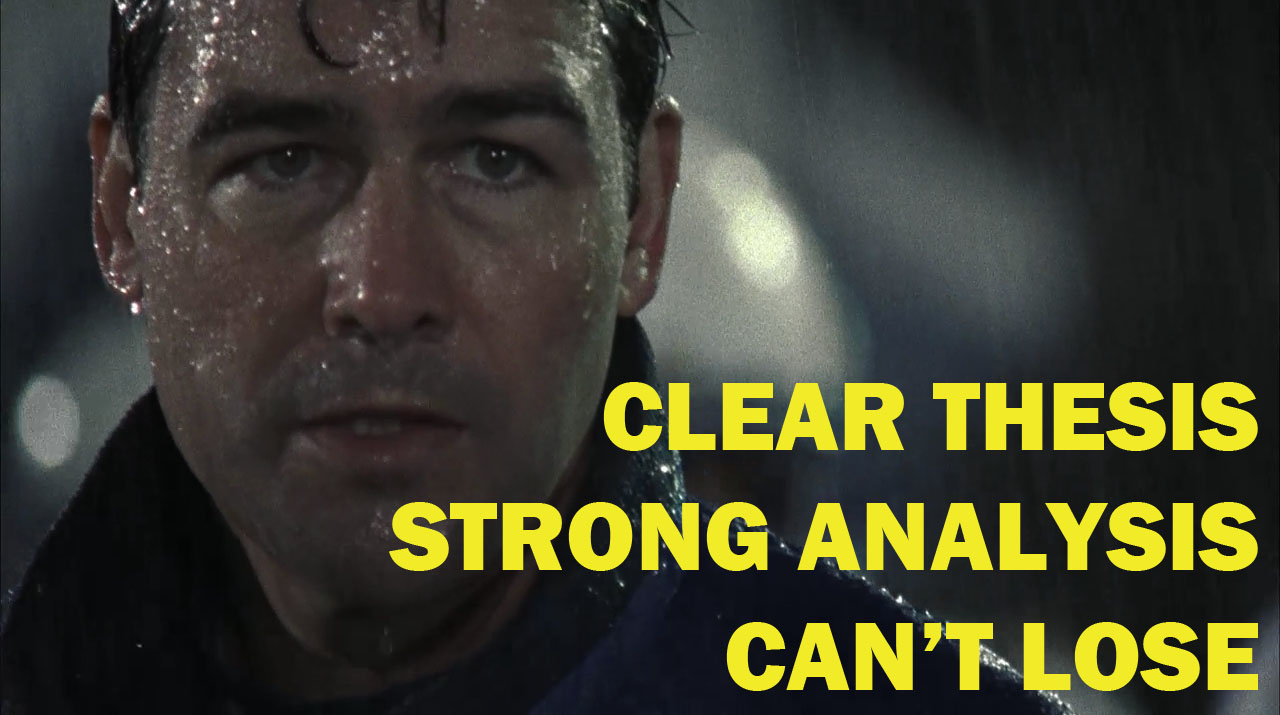 Friday Night Lights is often regarded as the best show that no one watched. This is really helpful for the class because not everyone has seen the show before. Furthermore, I believe FNL is important to study because it takes such important social and political issues and makes them easier to understand and talk about in class.

For the past semester, I have been teaching a new course devoted exclusively to Friday Night Lights. I am certainly not the first to devote an entire course to a single series. Jason Mittell and Linda Williams have taught The Wire, Anne Helen Petersen taught Mad Men, Andy Scahill has taught Breaking Bad and Alisa Perren regularly uses Orphan Black as a text in her Television Analysis Course. The experience has been an overwhelmingly positive one, bringing with it a new set of pedagogical tools and informing my instruction in the long term. Since TV is an evolving medium, and an individual series undergoes a great deal of revision within its run this depth model provides a comprehensive view of how a series works. Friday Night Lights proved an exemplary case study to discuss issues of adaptation, production cultures, TV authorship, genre, “Quality TV,” race, representation and social class. Perhaps the best thing of teaching the course was the community that was formed in the classroom by concentrating on a single text. In an increasingly fragmented TV environment, it was amazing to foster a community surrounding Friday Night Lights, especially as all of my students were on the same episode at the same time, then came together in the classroom. As one of my students, Suzi Melano put it, the course “created a family feel to the classroom when we are all openly discussing the show, book and series.”

One of the obvious advantages to teaching a course on a single TV series is the fact that the practice of watching a series together allows for the class to plumb the depths of the particular medium and to analyze the specifics of a particular show. One of my students, Rachel Burgess, stated “Although the class is focused around Friday Night Lights the book, the movie, and the television show it is about so much more than just analyzing these texts” Instead, the class was able to touch on a little bit of everything from social class, racism, movie narratives, television production, acting, and television narratives.” Being precise about Friday Night Lights’ production history opened up broader discussion of how TV functions more generally. For me, teaching Friday Night Lights at a football-mad college in Texas afforded me a warm audience predisposed to ask some of the big-picture issues that the series raises. Along the way, my students raised and discussed big questions regarding race, social class, marriage, fatherhood, and the role of sport in American culture. 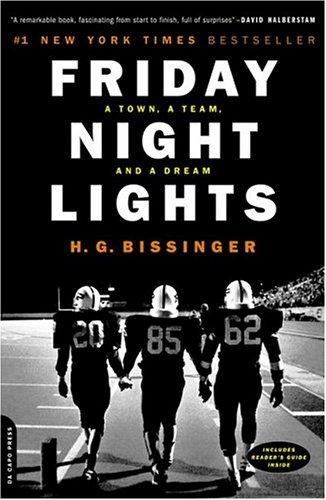 Friday Night Lights: A Town, A Team and A Dream Book

My students were assigned the task of reading H.G. Bissinger’s study of the real-life Permian Panthers from Odessa, Texas, Friday Night Lights: A Town, a Team and a Dream. Taking place in 1989 as the high school football team chased down the Texas State Championship title, the book’s subtitle reveals the careful relationship between the football team, the town and its dreams. To me, the novel also contains one of the most sophisticated and detailed accounts of race relations within American society. Paired with a reading I assigned, Billy Hawkins’ The New Plantation: Black Athletes, College Sports, and Predominantly White NCAA Institutions, resulted in one of the most meaningful discussions of race in America that I have ever had in my classroom. By focusing through the single lens of football, Bissinger is able to delve deeply into the politics of the everyday, skating between subjects and providing his readers with a comprehensive account of what football stands for, and how the fortunes of a post-oil-boom town in East Texas has a great deal to say about sport in American Society and why so many people invest so much into its pursuit.

Next, we compared the novel to its film adaptation, which writer/director Peter Berg faithfully interpreted and translated to the screen. In Berg’s hands, the transition is a very literal one, with the real-life figures within the story – quarterback Mike Winchell, fullback Boobie Miles and safety Brian Chavez – standing in for a wealth of issues facing the post-oil-boom town in the late 1980s and which all resonate with today’s students. Within the film, we could also view the series’ DNA, which was also adapted by Berg as writer-director and shares its focus on social issues and cinema verité inspired sequences. is a pretty faithful adaptation to the novel. Viewing the movie also allowed the students to see how work is translated between mediums. For instance, while the film is faithful to the book to the point of using the names of real people, the TV show changes these identities in addition to the name of the town.

Finally, the class viewed the entirety of the series on their own time, while certain episodes were highlighted throughout the term. While a labor-intensive task to be certain, my goal was for the course to resemble the current practices of binge-watching. Since audiences are increasingly viewing series in depth this suggests to me that students are watching series in the same way. Comparing the different mediums afforded yet another lens to examine the series, which yielded productive results. As one of my students, Rachel Land, stated, “I think comparing the book to the movie and television show is a brilliant way to get multiple perspectives of the story.” Whether the move was brilliant or not is debatable, but moving through the mediums was a bet that paid off, as did bringing in special guests throughout the term. 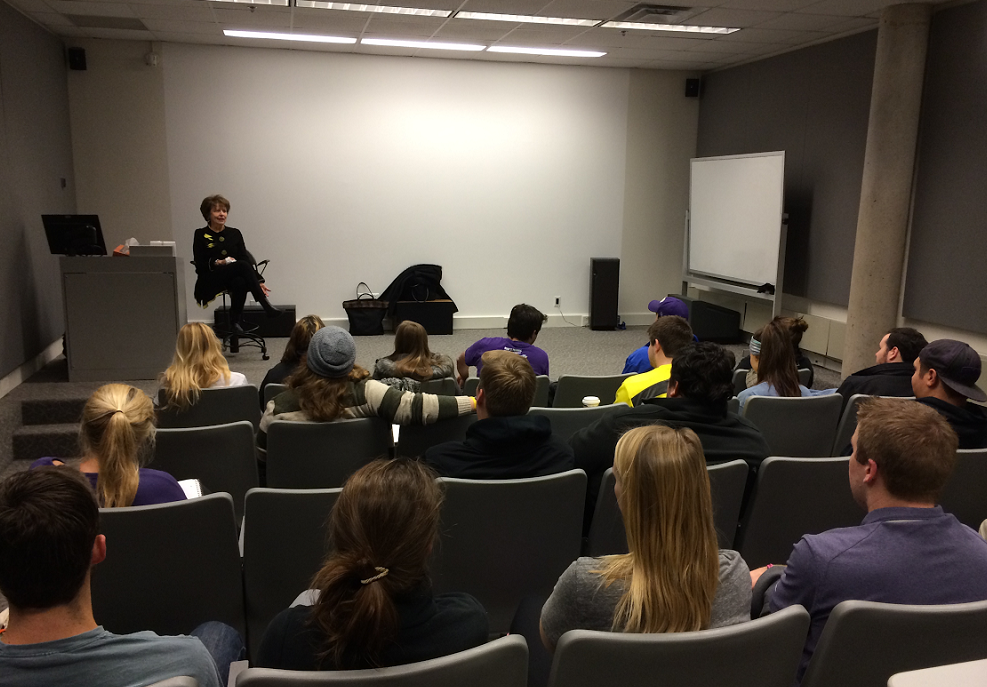 Throughout the term, we were lucky enough to bring in special guests from the series to describe their roles working on Friday Night Lights and add context to the production. Rick Sherrod, author of Texas High School Football Dynasties, series casting director Beth Sepko, Director of Photography Todd McMullen, series regulars Louanne Stephens and Brad Leland were invited to speak to the students about the series, providing them with in-depth knowledge related to the show. Focusing on different aspects also revealed just how intricate and collaborative the medium can be, especially on Friday Night Lights. For instance, casting director Sepko revealed how much input she had in finding and choosing particular actors. As a regular part of the production process, she was sometimes able to go above the heads of particular directors — revealing an under-analyzed aspect of production culture and speaking to the power of below-the-line figures within a production. Series DOP McMullen revealed in his talk that the series also employed an extremely unique shooting style, where three cameras were employed from various angles in order to cover the action. The camera crew, nicknamed “ninjas” by the actors were encouraged just as often to capture the poetry of the scenes rather than the standard two-shot. The show’s visual style also contributed to Friday Night Lights’ “indie” feel, where the cinematography reflects a cinema verité style in addition to a surprising intimacy.

These production decisions also engendered the series’ unique acting style, where actors didn’t have to hit their marks, nor were there rehearsals beforehand — a standard in TV shows. Louanne Stephens, who played Grandma Saracen in the show, spoke to this remarkable practice, as she outlined the show’s loose structure and the actors’ ability to improvise. All of this was in service of the show’s mandate to capture realism and to focus on the verisimilitude of the small-town setting. Stephens spoke of the acting process in the show, where the lack of rehearsal encouraged spontaneity, where the three-camera setup allowed for actors to be present within the scene without having to concentrate on hitting marks. Finally, Stephens compared this kind of acting to that of a regular series – such as Longmire which she currently acts in – where the process is much more technical and restrictive.

The class will also culminate in the coming weeks when producer-writer David Hudgins, director-producer Michael Waxman and actors Derek Phillips and Liz Mikel will come to discuss the series in a roundtable and screening on April 21st, 2015. Ultimately, my students will be able to engage with as many aspects of the production as possible, by being exposed to multiple lenses in production and listening to the various elements within the division of labor. For my students, this turned out to be one of the most valuable aspects of the class. As my student Simeon Jones noted “I think there is great value in studying a single series if the series is long enough,” we “have learned a lot about behind the scenes on the show FNL and having actors and writers come to our class and talk about the show is really neat as well.”

The experience of teaching one of my favorite television series has changed the way that I approach teaching the medium and my teaching more generally. Like all good classroom experiences, I learned far more than I taught not only from the people who came to talk to us, but from my students themselves. By equipping them with the tools to analyze the series through various lenses, I believe that they were able to come to substantial conclusions regarding series television and the special status that Friday Night Lights has among fans and critics. Of course, the class is less about me and more about the students’ experience. This term, I think that my FNL student Austin Frank said it best when he stated:

This course is something truly unique that not a lot of students get to experience or appreciate. This topic dives into so many issues that are real and still prevalent in high school athletics and also athletics in general at all levels. It has been eye opening to look into issues of race and exploitation of athletes. There is value in this class because it is not just a class about the show, movie, and book. People need to be exposed to what is really happening and the problems that are still present in America.