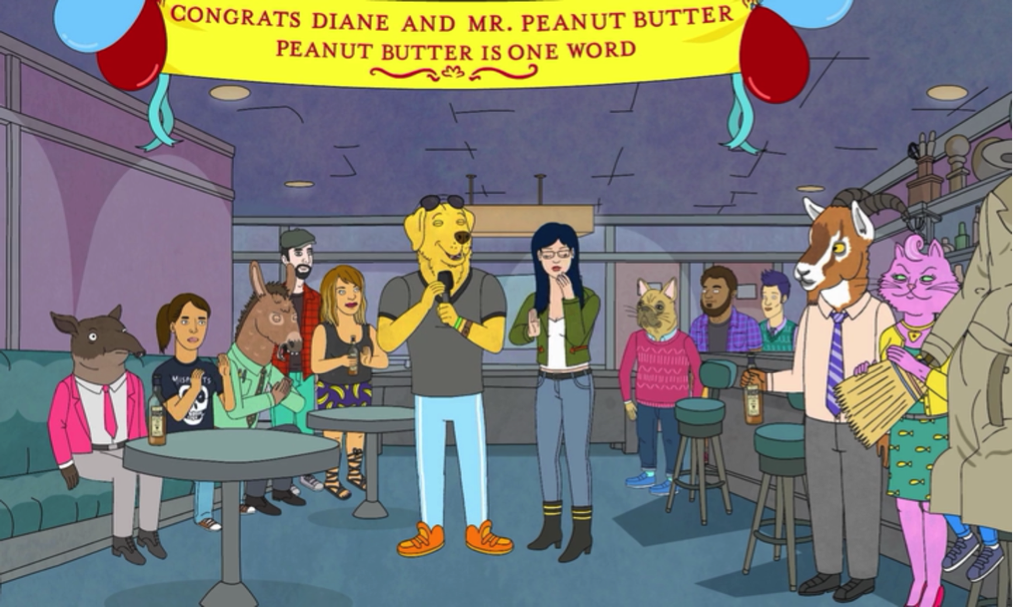 There is nothing new about genre mixing within the television industry. As Todd Gitlin (1984) notes, TV is an inherently “recombinant” medium, all too happy to graft together the limbs of old successes in the hope that this season’s Frankenstein’s Monster will jolt to life and keep eyes on the screen for a year or two. McAllister (1992) takes this argument further, arguing that television’s long seasons and commercial imperatives make pure genre productions virtually impossible and hybridity the natural state of the art. From this perspective, Cop Rock is less the unholy spawn of creative mad science and more something that had to be tried eventually.

And yet, despite television’s long tradition of putting odd things together and seeing what sticks, there remains something unique about the amalgam that is Netflix’s BoJack Horseman. BoJack is not merely a genre-bender in the tradition of The Flintstones, Twin Peaks, or Doogie Howser, M.D. It is instead something much more intriguing: a shameless cultural omnivore. It absorbs and recreates elements from across the television landscape, incorporating themes, plotlines, jokes and characters from shows as disparate as Family Guy and Breaking Bad.

This approach, we argue, not only makes for an interesting entertainment product, but is also indicative of something new about the contemporary TV moment. In the age of big data, “television” outlets such as Netflix have embraced the possibility that even the most counterintuitive combinations–say a talking animal animated sitcom that will by the end of season one include a very serious story of cancer, death, shame and forgiveness–might succeed, provided there are some statistics speaking in its favor.

For all of its creativity, the conceit of BoJack is lifted, rather shamelessly, from the Seth MacFarlane playbook. Family Guy, American Dad, The Cleveland Show and Ted have a number of overlaps, but perhaps the most striking is the use of a character that looks like an animal, talks like a person and yet occasionally lapses back into animal form. Family Guy’s Brian the dog, for example, is a sophisticated liberal blowhard with distinctly human flaws. Unless, of course, the mailman walks by, in which case he turns into an irrational barking mess. BoJack’s world is populated by dozens of such characters–horses, cats, dogs, whales, seals and so on–with intermittent non-humanity a consistent source of the humor. 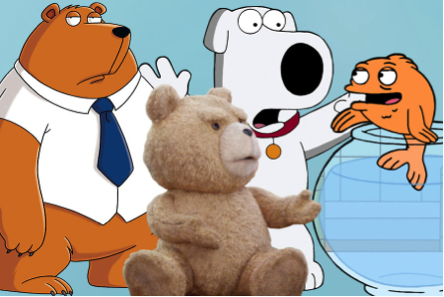 BoJack, however, draws (steals?) from more than just its animated brethren. The opening sequence of the show, for example, features a boozed up BoJack, dressed in a suit. Jazzy music provides the soundtrack. Half way through, BoJack free falls from the top of a building, plummeting to what would seem to be certain death. This is noteworthy on its own, insofar as its deathly seriousness stands in sharp contrast to the openings of other adult animated sitcoms like The Simpsons, South Park, and Bob’s Burgers. More importantly, however, the sounds and images are so evocative of Mad Men’s famous opening that it is tempting to read BoJack’s credit sequence as an homage or an all too serious parody. Furthermore, the similarities have prompted a comically parallel set of online fan engagements in which fans of both shows argue that the main characters–Don Draper and BoJack–will commit suicide in their respective finales. 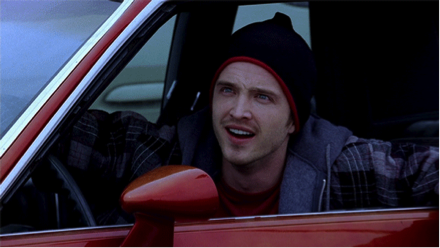 The show’s casting is similarly unashamed to pull from a variety of successful programs, many of which have a prominent home on Netflix. Will Arnett plays BoJack, rather obviously channeling his oblivious, self-important entertainer character of Gob Bluth from Arrested Development. Alison Brie’s character offers more than a handful of similarities to her role of Annie on Community. Most striking, however, is Aaron Paul’s Todd, who appears to be lifted directly out of Breaking Bad. Todd is an irresponsible understudy being held back by a domineering, unstable, irresponsible and yet somehow charming father figure. He has a run-in with a Mexican drug cartel. He wears a wool hat despite living in a warm, southwestern climate. He never seems to have time for a shave. He is, in other words, an only slightly exaggerated version of Jesse Pinkman. 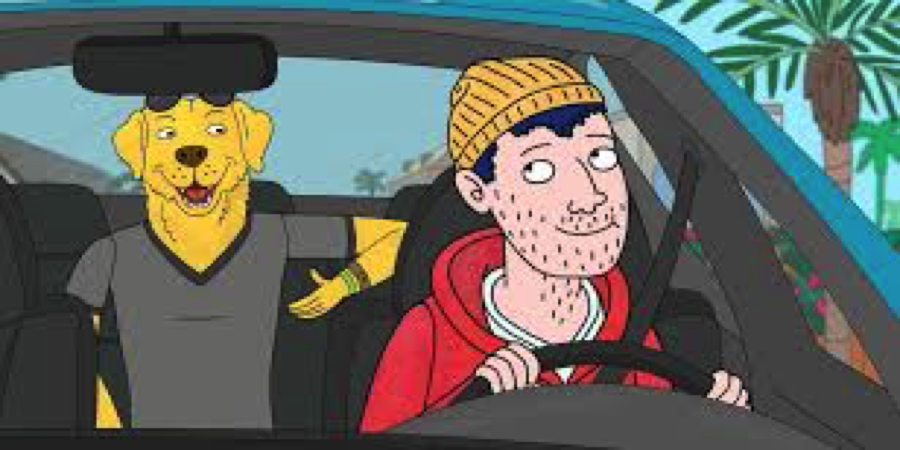 The Breaking Bad elements of the show go beyond even this rather obvious importation. For one, there is BoJack’s very serious, multi-episode engagement with Herb Kazazz, an old friend now stricken with cancer. As the backstory plays out, we learn that BoJack, in a moment of selfish weakness, sold Herb out for money and fame many years ago. Not only does this plotline seem to violate standard principles of TV comedy by moving into a rather dark, seemingly unironic space, it also overlaps remarkably well with Walter White’s relationship to Elliot Schwartz throughout Breaking Bad. More generally, BoJack draws upon the narrative strategies of prestige, complex TV, offering overlapping and interweaving storylines no doubt meant to increase the program’s “bingeability.”

In pointing out these similarities we, by no means, intend to suggest that show creator Raphael Bob-Waksberg and his writers were making creative decisions based directly on the algorithmic demands of Netflix data. This is almost certainly not the case, even if Netflix openly admits to providing a number of suggestions for the program. However, we do contend that there is something more than a coincidence at play here. All of the shows listed above, with the exception of Community, are found in Netflix’s U.S. streaming catalogue in their complete runs. Although it is impossible at this point to get a hold of actual Netflix rating numbers, it is not hard to guess that 12 seasons of Family Guy and 6 each of Mad Men and Breaking Bad represent expensive properties. The fact that Netflix keeps them on board thus suggests a steady procession of viewers. With Arnett’s Arrested Development, they went as far as to produce an entirely new season at considerable cost. Furthermore, Netflix certainly knows the extent to which these viewers overlap.

Our suggestion, therefore, is that at the moment of the show’s pitch and throughout the development process, Netflix may well have had reason to believe that BoJack’s strange menagerie could actually work. Armed with data about the viewing habits of its clients, the company was able to free itself from the restraints of long standing industry lore and even the limitations of blunt instruments such as genre conventions and traditional demographics. In a previous era, BoJack may well have been seen as a program full of contradictory niches, hailing small audience groups with one aspect while repelling those same groups with the next. The data, however, may well have shown that this would not be the case, suggesting that audiences for the shows BoJack draws from have more in common than is immediately apparent.

Certainly, there is the potential for the abuse of such information. If BoJack works too well, we could see a parade of increasingly ham-fisted attempts to combine popular programs in cheap, search engine-friendly ways. Though this may be unfortunate, it would also not be terribly new, of course, as copy catting has long been one of the industry’s most unappealing but profitable vices.

In the meantime, we can enjoy the freedom that BoJack displays in its mixing of genres and crossing of references. It is a strange, wondrous beast of a show, recalling Raoul Duke’s description of Dr. Gonzo in Fear and Loathing in Las Vegas: “too weird to live, too rare to die.” In a previous era, it likely would not have lived at all. Today, it exists and even thrives, perhaps less to the surprise of its benefactors than we might think.