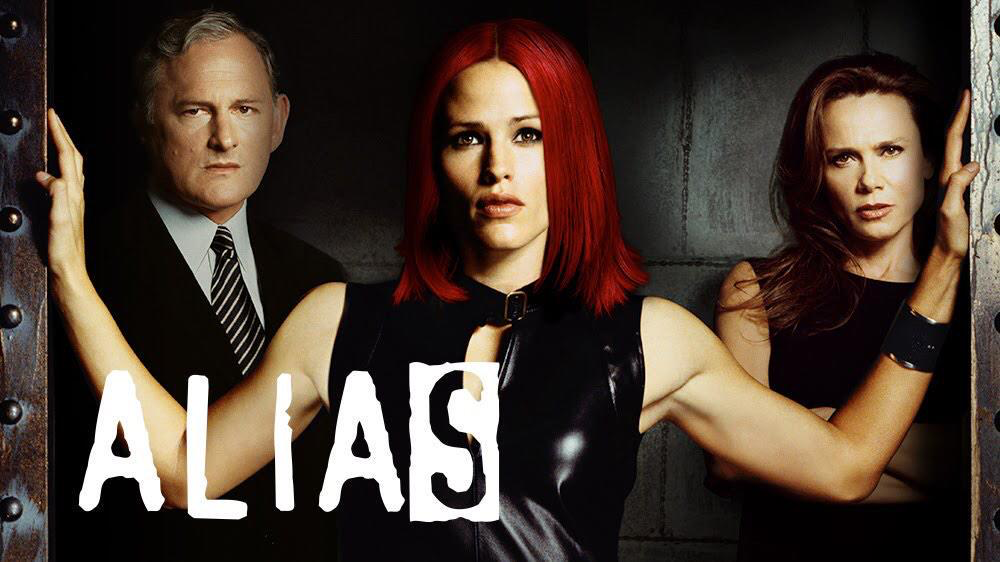 Strong female lead Jennifer Garner in Alias
If there is one thing that links my viewing habits, according to Netflix, it is television shows that feature a “Strong Female Lead,” which generally seems to refer to women leads in genres traditionally associated with male characters and/or audiences. While 70s and 80 series flirted with the idea of women in men’s roles, a key progenitor of the contemporary “strong female lead” is Dana Scully (Gillian Anderson), one half of the supernatural, extraterrestrial crime fighting duo that helmed the 90s cult classic, The X-Files. The show made such a lasting impression on fans that recent speculation of a reboot led to intense fan response.1 While the wide ranging sci-fi procedural offered any number of entry points for fan engagement, no doubt a set of them were thrilled at the return of the intelligent, tough, logical, take-no-prisoners Scully and the romantic relationship of equals between her and her conspiracy cracking partner, Fox Mulder (David Duchovny).

Despite my early love for the show, I find myself less optimistic about the prospect of its return. By the end of the series, Scully suffered the fate of so many “strong female leads” in that her knowledge and agency were fundamentally undermined. In this post I’d like to tentatively explore the relationship between women, knowledge, and agency in long arc sci-fi, spy, and political series, including The X-Files, Chuck, Alias, and Scandal. Each series was premised on some level female knowledge and agency. Scully begins her career in The X-Files after being sent to investigate Mulder, and a great deal of the early narrative is framed through what she sees. Sarah Walker (Yvonne Strahovski) comes into the life of the titular Chuck (Zachary Levi) as a tough-as-nails, super spy CIA handler. Alias begins with Sidney Bristow’s (Jennifer Garner) realization that she is working for a terrorist ring rather than a black-op CIA group and her choice to work as a double agent. Scandal starts as the story of can-do Olivia Pope (Kerry Washington), a Washington fixer with extraordinarily close ties to the White House. These are “strong female lead” characters who exude confidence, competence, and importantly the knowledge that allows them full agency in determining their actions. However, over the course of each of these series, each “strong female lead” becomes not the agent of her own story, but increasingly a pawn in service of broader plot development, or in favor of the development of other characters. Each remains “strong” in terms of her abilities, but her access to knowledge and subsequent ability to act becomes extremely limited.

Balancing humor with pathos, juvenile shenanigans with characters who mature emotionally, and classic spy movie tropes with comic book culture, Chuck was a show that survived five seasons on NBC thanks to intense efforts by its fans. Though centered on Chuck, the show’s other central character was CIA agent, Sarah Walker. Starting as Chuck’s handler after he accidently downloads a top secret military computer program into his head, over the course of the series, romance blooms between Chuck and Sarah, and we witness her ability to become emotionally vulnerable without ever losing her talents as a super spy. Indeed, Chuck was a show that allowed such growth not only for its main characters to write a essay, but for its secondary ones as well. As its fifth season progressed, Chuck allowed each of its characters moments of closure befitting their growth as the team chased its final arch villain together. All is going well until Sarah, through one of the comic book style devices that populated the show, loses her memory of her entire time with Chuck.

On the one hand, Sarah’s amnesia served as a convenient device to travel down memory lane, including the recreation of a number of scenarios that rewarded loyal viewers. The device also allowed for viewers to reconnect with the journey of Chuck and Sarah through these retellings. It also suggested that even without her memory, Sarah was still changed in some fundamental way by Chuck.

Chuck tries to jog Sarah’s memory
On the other hand, this move had the effect of denying Sarah, a character whose story arc had been so central to the narrative, full engagement with the overall sense of closure and forward momentum allowed the rest of the ensemble. As the show came to a close, we got to see all of the various characters move on in new directions. As each character experienced the emotional payoff from the experience of their journey, Sarah was left to merely witness hers. Instead of moving forward, the character was propelled backward, and everyone else knows what has happened; the other characters and the audience all saw what Sarah could not. Even the final moments failed to bring full closure for Sarah, as viewers are left wondering whether or not listening to stories of her life and sharing a kiss with Chuck would be enough to bring back her memories. None of this is to say that final closure was necessary, but it is to say that it is significant that Sarah is the character denied this.
Sarah can only watch her past
Is this closure?
Amnesia also featured in the “strong female lead” spy thriller, Alias. Super spy Sidney Bristow spent the first two seasons working to bring down the agency she had worked for, SD-6, believing it to be a black op CIA group. When she learns it is a terrorist cell she balances life as a double agent in pursuit of bringing SD-6 down. However, at the end of season two, Sidney learned that she had been robbed of two years of her life due to amnesia. While in this case, Sidney and the audience were left equally in the dark, it is still a significant that, once again, the “strong female lead” was asked to reconstruct her own experiences. More than this, as the convoluted series progresses, Sidney was increasingly reduced to a pawn in a series of moves between her ply parents and former boss. As characters continually acted without Sidney’s full knowledge, her agency was reduced not to completing her own work, but to responding to the actions of other characters. 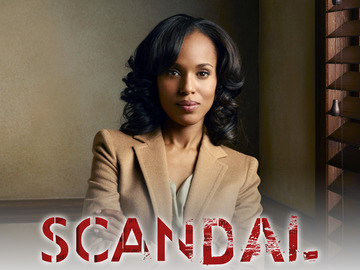 Kerry Washington as Olivia Pope in Scandal
More recently we have witnessed a similar shift in access to knowledge and action for television’s most recent “strong female lead”, Olivia Pope. Olivia began the series as the one who holding secret knowledge regarding the election of US president in addition to any variety of state secrets look here https://grademiners.com/personal-statement. As the series has progressed, rather than being the “in charge” fixer of scandals, she has become the pawn in a series of machinations set in motion by her powerful father Rowan Pope (Joe Morton) and his racially charged relationship with the men in Olivia’s life, President Fitzgerald Grant (Tony Goldwyn) and Naval intelligence officer, Jake Ballard (Scott Foley). Olivia is no longer the one who uses her knowledge to competently solve political problems, but increasingly a pawn in a testosterone fueled battle between these men. Her knowledge and ability to act moved from being at the core of her subjectivity as a character to an object of currency between these men and other characters.
Rowan and Fitz square off over Olivia
Which brings me back to The X-Files and the fate of Dana Scully. Despite having helmed the series for its final two seasons, in which Fox Mulder appeared only sporadically, the program’s two part finale ended up making the story exclusively about Mulder’s quest, which had originally centered the series, but in which and through which Scully had developed her own history, story, and set of commitments. Mulder returned with secret knowledge about an alien plot, allowed those around him to try to rescue him, only to finally reveal to Scully the nature of that plot. In other words, Scully was reduced to mere supporting player at research paper service in the series story arc, and denied any final closure that specifically referenced her journey. Will a reboot just offer more of the same? 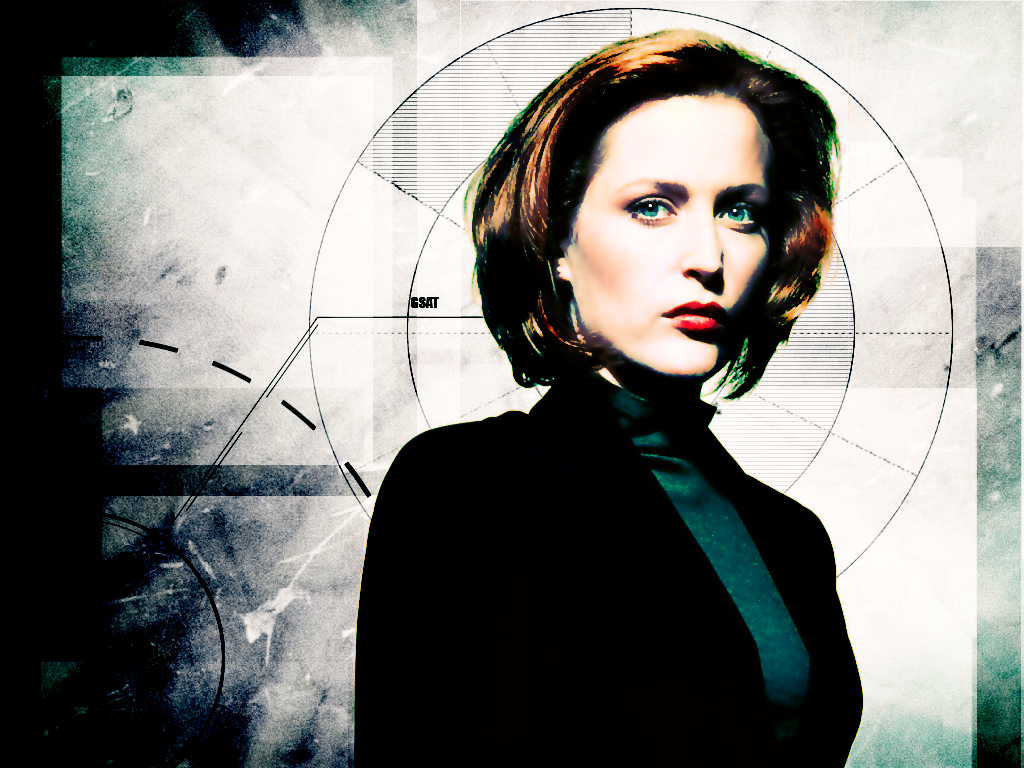 Gillian Anderson in The X-Files
Over and over again in these serialized narratives, the “strong female lead” somehow loses access to knowledge, and is left a pawn in other people’s games to which she can now only ever react rather than act on her own behalf. Of course, modes of narration generally play with regimes of knowledge in order to build dramatic tension and highlight certain relationships that are figured in the interplay between what audiences know and what various characters know. But what all these dissertation writing seem to share is an in inability to maintain the agency of their female characters. They are either occluded from knowing things the men around them and the audience knows, and/or increasingly reacting to situations set in place by the men around them. In each case, these once strong and vital characters are denied any sense of agency in their own lives.