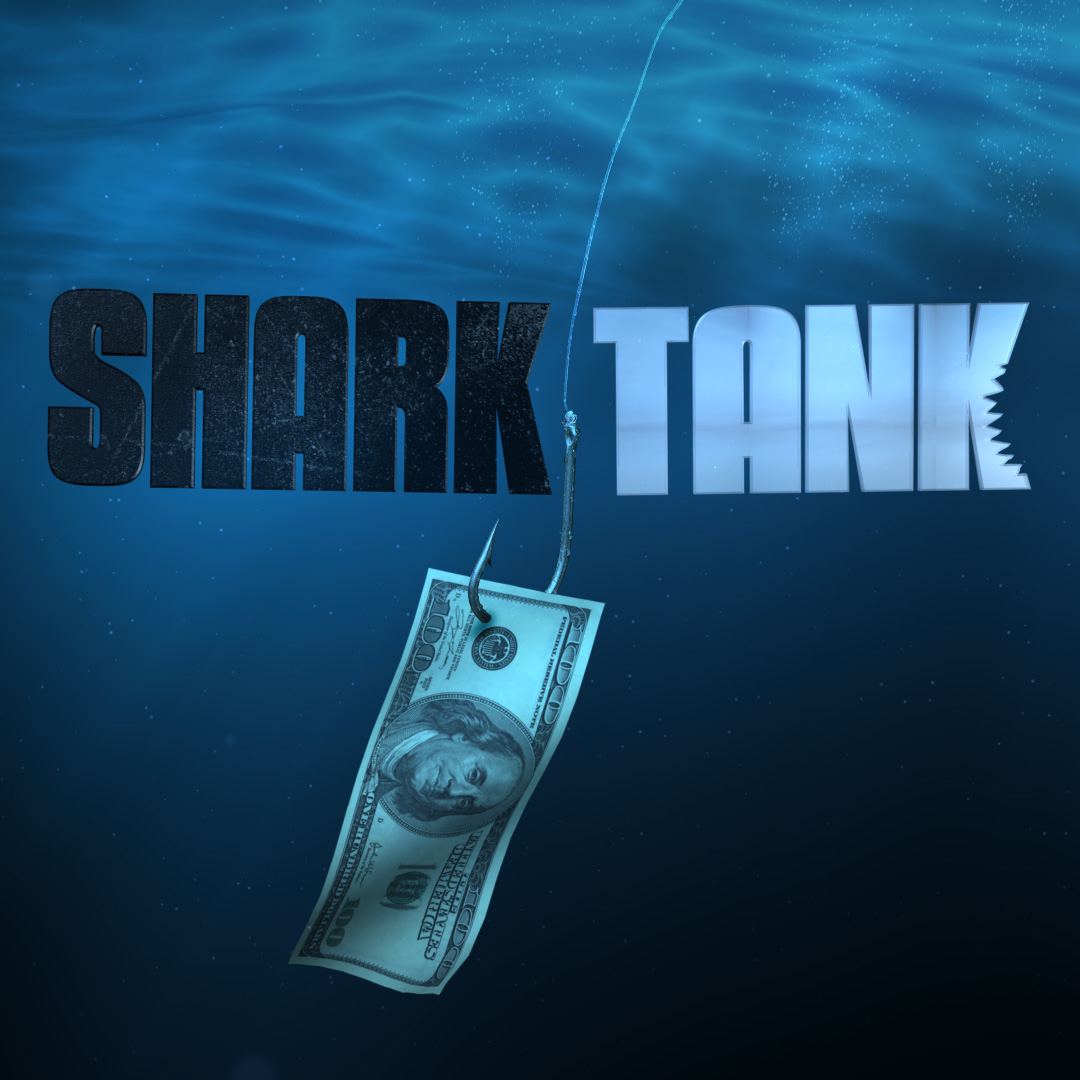 ABC’s Shark Tank
On ABC’s Shark Tank, aspiring entrepreneurs pitch their products and business plans to a group of potential investors referred to as “sharks,” multi-millionaires (and a billionaire) including Daymond John, Kevin O’Leary (aka “Mr. Wonderful”), Barbara Corcoran, Robert Herjavec, Lori Greiner, and Mark Cuban. On a recent episode (season 6, episode 21), a married couple presents a pillow designed to make it easier to feed twin babies. Both the wife and her husband lost their jobs in pharmaceutical sales and temporarily had no car or even a phone. The husband took a job washing cars for a friend’s business, and they both put their efforts into patenting and selling the pillow the wife had invented. As they tell their story, Mark Cuban interrupts, “Good for you because there’s going to be people watching at home, that are in similar circumstances, thinking, ‘If I only knew somebody, if I only had capital available.’ You didn’t know anybody, and you put it all on the line, and you went for it. That’s the American dream, and that’s exactly why we do this show.” Or as he told another couple on season six’s first episode, “You guys are the American dream come true. Because everybody out there now knows that your back can be against the wall, you can suffer personal tragedy, and with $700, you can be standing right [here] ….” Over the course of six seasons at https://grademiners.com/dissertation-chapters, the show has featured entrepreneurs with a variety of backstories, but Cuban’s statements reveal Shark Tank’s favorite narrative: people who experience personal setbacks, start over with next to nothing, remain focused and driven, do whatever it takes to succeed (selling door-to-door, for example, always gets an enthusiastic response from Cuban), and now just need the help (money, connections, advice) of an investor to reach the next level. And as Cuban’s remarks suggest, this narrative has a pedagogic function: these stories model how to achieve success. 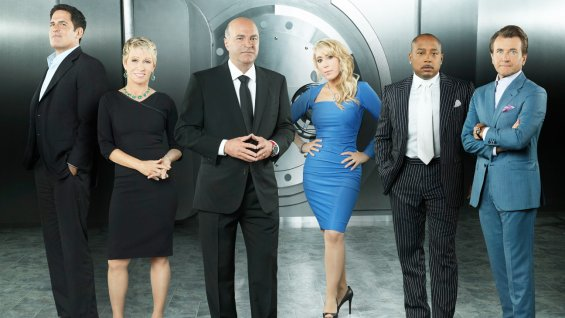 The “Sharks”
The show openly and frequently promotes the American dream of success, but doing so reveals a tension and contradiction at the heart of the dream: your hard work will take you only so far, and you still need the help of someone wealthier and better connected than you. In one sense, Cuban accurately describes the American dream: money and connections don’t matter if you do not possess initiative and ambition. But personal drive is not enough. If Cuban’s statement were wholly true, there would be no Shark Tank; the show exists to provide networking and capital—to provide those necessary ingredients once the self-made, self-driven approach reaches its limit. Take the inventor of “Funbites,” for example, who created a device to cut food into shapes for kids (season 6, episode 18). When Robert Herjavec asks why she’s there in the Tank, she replies, “I have taken this company as far as I can go as one person. I work 24/7. I’m the hardest worker. … I know how to sell my product, but I need your help.” And by “help,” she means access to large retail chains and companies like Disney.1 Here we see the American dream’s dilemma: you can do everything right (“I work 24/7”) and only achieve limited success.2 Something (or someone) else is needed.

In this way, each episode stages a Horatio Alger story—and not the Alger myth most people know. In popular culture, a “Horatio Alger story” connotes the idea that diligence and hard work pay off. But that version is a misreading of Alger’s original stories: in novels like Ragged Dick, diligence and hard work take you only so far—until a wealthy benefactor intervenes. In Ragged Dick, the eponymous protagonist transitions from an illiterate bootblack who squanders his money to a “’spectable” young man with a basic education and a savings account. Alger comments, “His street education had sharpened his faculties, and taught him to rely upon himself. He knew that it would take him a long time to reach the goal which he had set before him, and he had patience to keep trying. He knew that he had only himself to depend upon, and he determined to make the most of himself—a resolution which is the secret of success in nine cases out of ten.”3 But despite his best efforts and meager success, Dick remains a bootblack until the last few pages of the novel. While riding a ferry, Dick saves a young boy who falls into the water, a child who happens to be the son of a wealthy businessman. The man repays Dick with a job as a clerk in his counting-room and a salary higher than he could imagine. His own efforts paid off in the sense that learning to read and write dissertation help put him in the position where he could take a job as a clerk; but he still depended upon a fortuitous encounter to realize his dream. That part of the Alger story has been overlooked because it interferes with the more heroic “self-made man” scenario. Like Shark Tank, Alger’s stories are paeans to self-reliance, but both reveal the limits of that myth. 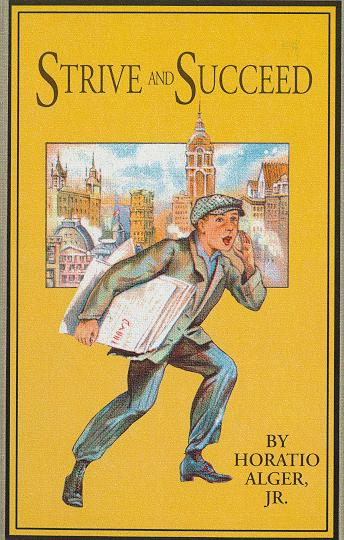 A typical Horatio Alger cover
With its Horatio Alger narrative, Shark Tank harkens back to a pre-20th century version of the American dream, in which “one could realize the fruits of one’s aspirations through applied intelligence and effort,” self-motivation, and discipline.4 This version remains popular today because it’s been so deeply enshrined in American thought and culture for centuries, dating back to Abraham Lincoln, Benjamin Franklin, and even the Puritans. A new version of the dream, however, arose in the mid-19th century and eventually found its exemplar and flourished in Hollywood. Jim Cullen refers to this version as the “dream of the coast”—the California coast—and discovers its origins in the California gold rush (“Transformative riches were literally at your feet”) and in Hollywood, where personality and leisure replace character and hard work, and being famous is an end in itself.5 Unlike Shark Tank, most contemporary reality shows emphasize this newer, Hollywood version of the American dream and its emphasis on personality or chance. For example, shows like The Real World and Big Brother exist to showcase personality; as viewers, we already know what will happen when incompatible people are placed in a cloistered living situation. Personality (and the crafting of a persona) matters as well on talent competitions, such as American Idol or The Voice, where a genuinely gifted and hard-working contestant may win, but true celebrity status remains elusive. Other shows rely on gold-rush style luck: maybe this storage locker will contain unimaginable treasures (Storage Wars), or perhaps some belonging, or even the junk in my garage, has value I didn’t realize (Pawn Stars, American Pickers). Or worse—there’s a combination of personality, luck, and delusion: maybe I’ll be the one who gets the final rose (The Bachelor/Bachelorette).

While Shark Tank relies upon a different version of the American dream than these shows do, it still does not completely escape typical reality show pitfalls. The producers do sometimes select contestants for reasons of personality over product, but after all, sales requires a degree of showmanship. Also, some contestants do not expect a deal, but merely want the TV exposure that will instantly boost revenue. Yet rarely does the show feature train-wreck contestants—reality show contestants selected precisely to fail. For example, the most bizarre pitch I’ve seen was the man who proposed to surgically implant a bluetooth device behind the ear. (It’s not surprising that this segment appeared on season one’s first episode, hence the need to attract an audience). But such standard reality show techniques do not occur often. There’s tough competition to even appear on the show in the first place, and it would greatly undercut the show’s appeal if it allowed too many “undeserving” contestants with no shot of a deal. Sometimes, however, those people do walk away successful: no deal seemed less likely than the one involving a company called “I Want to Draw a Cat for You,” a business where one man draws custom stick-figure cats upon request—but Mark Cuban invested.6

I Want To Draw A Cat For You
Shark Tank is still reality television, as manufactured as any other program, but I would argue that its emphasis on the “old school” version of the American dream accounts for its success, and if for no other reason, that strategy certainly helps differentiate the show from others. The show consistently achieves some of network television’s highest ratings in the 18-49 category for Friday night, a difficult time slot.7 Viewers tune in to see the American dream of success played out, week after week—a myth, no doubt, but like all enduring myths, neither wholly true nor false.8