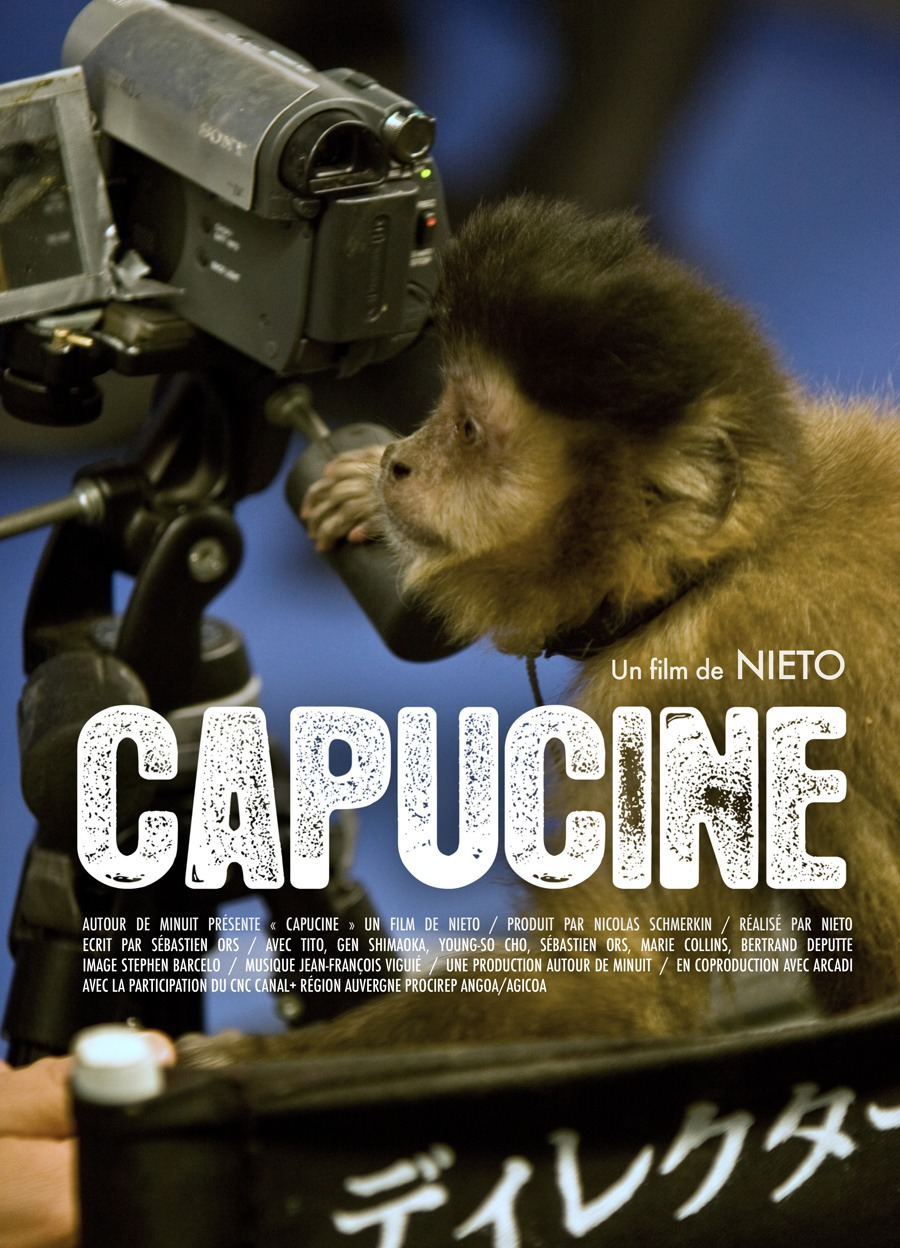 I recently taught a class on film authorship in which we read the history of auteurism chronologically. Near the course’s beginning, we discussed Andrew Sarris’s “Notes on the Auteur Theory in 1962.” I’ve read the essay so many times that now I increasingly focus on minor, inconsequential points when reading, usually ones that humor me. This time, I paid attention to one particular statement and question: “An expert production crew could probably cover up for a chimpanzee in the director’s chair. How do you tell the genuine director from the quasichimpanzee? After a given number of films, a pattern is established.”1 During this particular reading, this quote brought two unrelated images to mind, which I haven’t stopped thinking about since: one from a news story popular in summer 2014, the other from one of my favorite Buster Keaton films. I have no intention (or the space) of developing some full-fledged theory of primates and authorship, but I do want to think about these two images in relation to Sarris’s basic point: that at least in single instances, the nature of the cinematic apparatus could indeed allow an unskilled monkey or ape to produce art indistinguishable from a human-made work. As my class continued, a clear trajectory emerged in our readings: the earliest texts enthroned the director as auteur, the next period elevated other figures to the level of authorship (screenwriters, cinematographers, actors, etc.), and finally, scholars began to question the very notion of authorship itself—its meaning, to whom the term can apply, etc. Overall, one notices a path from certainty (the director is the auteur) to vagueness (what, exactly, is authorship?) For me, the two images studied here provide emblems for the haziness of ideas about what counts as art, creativity, and authorship. 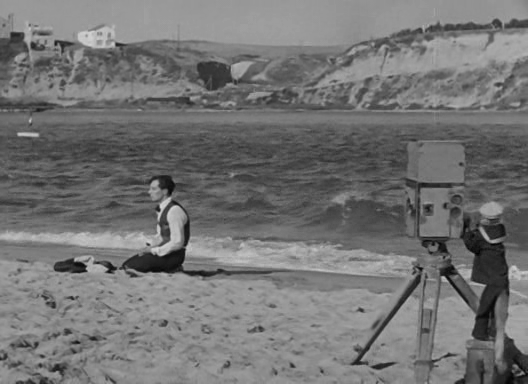 In The Cameraman (Edward Sedgwick and Buster Keaton, 1928), Buster Keaton sells tintype photographs on the street, but longs to be an MGM newsreel photographer in order to impress his love interest, Sally, who works in the newsreel office. He manages to purchase a newsreel camera, but continually fails to operate it properly. His luck improves, however, when he acquires a monkey sidekick, who assists him while filming. At the film’s climax, Buster has set up his camera to film a regatta, which includes a boat containing Sally and Buster’s romantic rival. During a sharp turn, Sally is thrown from the boat; her companion swims to shore, leaving Sally to drown, but Buster’s quick to the rescue. He brings her to shore, and then immediately darts off to the drugstore to get medical supplies since she’s unconscious. While Buster’s away, she awakens in the arms of the coward who abandoned her and praises him as her savior. Buster returns just in time to see them leaving together, arm-in-arm. Defeated, he drops the supplies and falls to his knees on the beach. As he does so, the camera tracks back and to the right, revealing the monkey cranking the newsreel camera: he’s recorded not just the emotional drama that will earn Buster his coveted job, but the truth that will help win Sally’s heart. 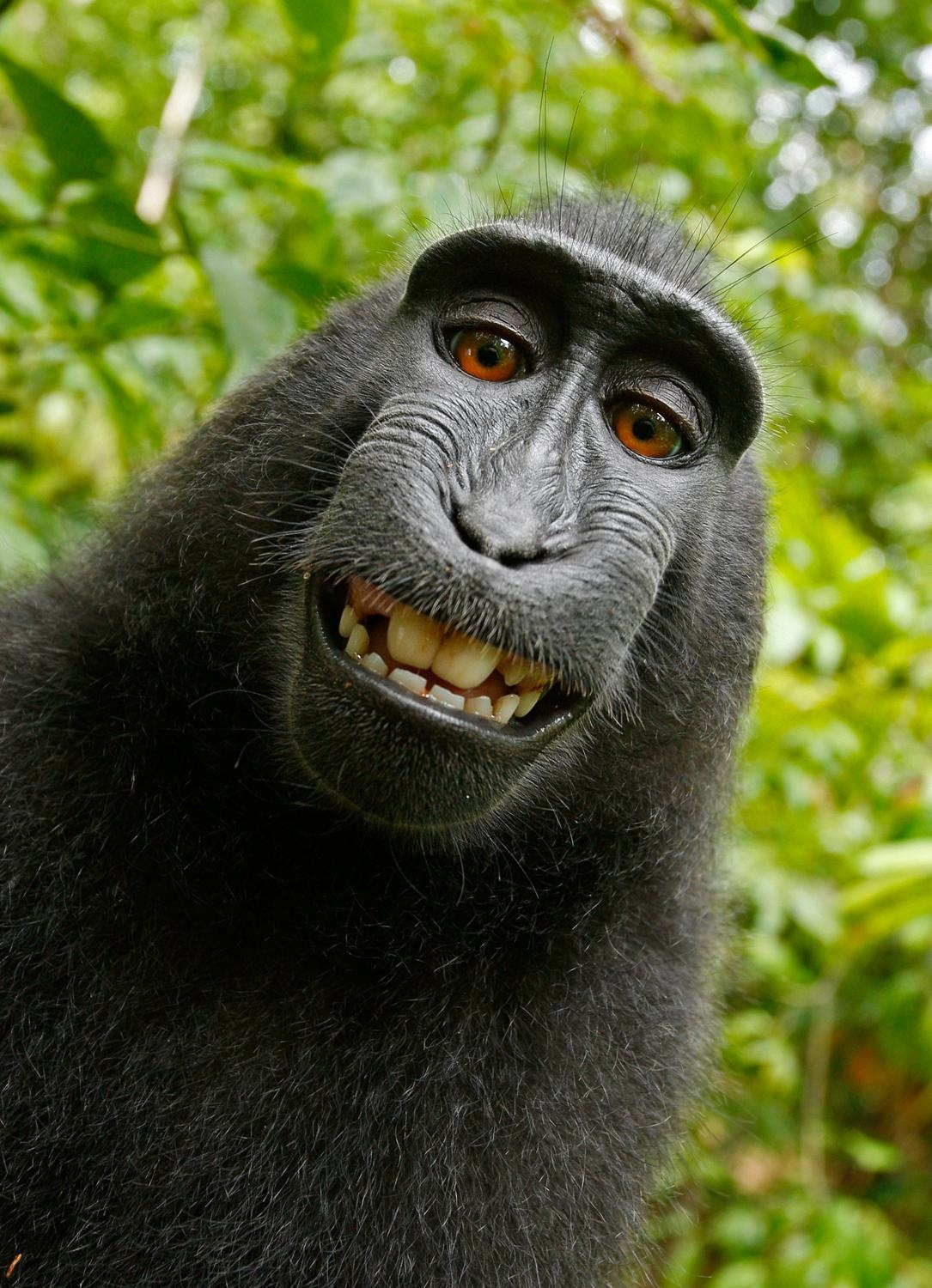 In 2011, British photographer David Slater traveled to Indonesia to photograph macaque monkeys. One of the monkeys took hold of the camera and began taking selfies. Slater described the situation in The Telegraph: “They were quite mischievous jumping all over my equipment, and it looked like they were already posing for the camera when one hit the button. The sound got his attention and he kept pressing it.”2 These images and this story went viral again in summer 2014 due to Slater’s legal battle with Wikimedia Commons, who posted the images in its public domain collection.3 Slater wants compensation, but the Wikimedia Foundation finds itself legally in the right: whoever takes a photo owns the photo. A monkey took the photo, so nobody owns it.4 The case for this particular monkey’s authorship status (but not copyright) is unusually strong, one copyright expert argues, because the macaque didn’t just press a button, but held, aimed, and operated the camera—often resulting in striking poses and compositions.5 In fact, I find it hard not to anthropomorphize these images; although some were blurry, the best ones seem to reveal personality, spontaneity, and pleasure—uncanny, nearly human, qualities.

In addition to these stories, I could include others: from the monkey in Bali who stole a tourist’s GoPro camera and filmed itself,6 to Oedipe (2009), the first film directed by a monkey.7 If we move from photography to painting, the number of monkeys and apes engaged in creative activity increases even more. What’s unique about the film and photography examples shot by monkeys, however, is that they make literal André Bazin’s statement about photography’s (and hence, cinematography’s) automatism: “Photography completely satisfies our appetite for illusion by means of a process of mechanical reproduction in which there is no human agency at work. … For the first time, an image of the outside world takes shape automatically, without creative human intervention ….”8 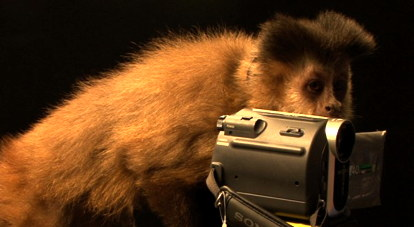 At the same time, this automatism points to the long-standing respectability crisis that haunts authorship in the photographic arts: sophisticated technological advancement allows anyone to easily operate a film camera (whether cranking, clicking, or today, tapping). In other arts, this situation differs. In painting, primates cannot produce realistic compositions, but can create abstract works, long providing a favorite debunking tool for those who find modern art fraudulent. In literature, the infinite monkey theorem applies: a monkey typing away at a computer for an infinite amount of time would eventually produce something legible—even reproduce Shakespeare’s works. But with film and photography, anyone or anything (monkey, ape, human) can indeed press a button and create a realistic image or, potentially, aesthetic beauty (as with the monkey selfie). Historically, many have thought that the camera’s automatism demotes photography as an art; real art, the argument goes, should require more skill than merely replicating reality. For this reason, early film theorists, such as Rudolf Arnheim and Sergei Eisenstein, viewed film as art precisely to the extent that it did more than duplicate the real world; for them, “film as art depends on the creative intervention of an artist” and not merely reliance upon cinema’s recording function.9 In the 1930s, Arnheim summed up the viewpoint that many people held: “‘Film cannot be art, for it does nothing but reproduce reality mechanically.’”10

Statements like this one, V.F. Perkins remarks, led filmmakers from the 1920s on to overemphasize cinema’s expressive capacities and to see “the creative essence of the cinema [as] difference-from-reality… Because ‘art only begins where mechanical reproduction leaves off,’ [filmmakers and theorists] put a premium on the blatancy of the departure; the greater the difference, the more manifest the Art.”11 Yet we must not forget that “the camera is primarily a recording instrument. It does not always add significantly to what it records, but its ability to select, mould, heighten, or comment upon events is a consequence of its ability to record them.”12 Both images above highlight the camera’s recording function, a property so fundamental and basic that, yes, even a monkey or ape could do it. For Sarris, in fact, a chimp might achieve one-hit-wonder status due to film’s collaborative nature, but lacks the ability to develop a personal style. Yet while a monkey typing away might one day reproduce the words of Hamlet (where style is embedded in words and syntax), a monkey operating a film camera could never remake Vertigo (where style involves the complex coordination of myriad factors, including time); mechanical reproduction is one thing, but film style—as Sarris’s opening quote makes clear—is another. 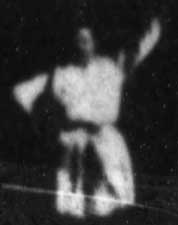 This still comes from the very first motion picture experiments shot in the United States, images filmed by W.K.L Dickson for the Thomas Edison Company in either 1889 or 1890. It’s significant—and appropriate—that these short films were called “Monkeyshines.” The term captures the playful quality of the “cinema of attractions,” cinema’s earliest era in which avant-garde trickery, documentary realism, and even rudimentary narratives mix and match in any given film. The term also fits the content of these film experiments: a man, quite literally, monkeys around: he twirls and waves his arms, bends side to side, and then lifts his hat up. Although the quality has greatly deteriorated, the man’s exaggerated gestures allow the images to register with (slight) clarity and to call for our attention across some 125 years.