“What You Need to Know About Text-to-911” Video from the FCC
In August 2014, the Federal Communications Commission (per the 21st Century Communication and Video Accessibility Act) adopted an order requiring wireless carriers and other technologies that enable the delivery of text messages to deliver 9-1-1 texts to emergency services in areas that support such services, and to send bounce-back messages in areas without support. It is now up to 911 call centers, officially known as Public Safety Answering Points (PSAPs), to implement technologies to receive and respond to text messages. The FCC created a system for PSAPs to register their readiness, and text-to-911 services are now rapidly expanding around the country (see where services are available).

My home state of Indiana was the second to widely implement text-to-911 (following Vermont). This was made possible by INdigital telecom, which manages Indiana 911 services, routing calls on behalf of the Indiana Wireless Enhanced 9-1-1 Advisory Board. In May 2014, INdigital launched texTTY for use in 911 call centers. Indiana PSAPs now have access to texTTY, “a platform that allows the PSAP to ‘add on’ non-voice (SMS)”1 to an existing call. This means that PSAP workers can receive texts and reply, as seen in the video below, using a simple interface; they may also choose to initiate texts following a silent phone call from a given number.

texTTY video demonstrating use of the platform by a PSAP
Platforms such as texTTY are important because while the FCC can make recommendations regarding telecommunications services, the 9-1-1 programs are run at the state level, with various personnel and technological arrangements. This means that it is actually up to states to ensure that the technological ability to text-to-911 is met by an infrastructure that is capable of responding to these texts. The FCC2 has compiled a list of best practices for PSAPs regarding implementing text-to-911, “without requiring significant up-front investments or upgrades, including the use of web browsers for dissertation writers, gateway centers, conversion of text messages to TTY calls, and state or regional aggregation of text-to-911 processing.”

In the case of Indiana, according to the Indianapolis Star,3 text-to-911 “will let Hoosiers call for help with the same amount of effort it takes them to “LOL.”” It may be possible for me to alert emergency services with a quick “OMG,” but the rollout of this service has been accompanied by constant exhortations that members of the public avoid using it. The FCC advises that “texting to 911 should be thought of only as a last resort, …. people who are hard of hearing, deaf, or speech-impaired should still be encouraged to use TTY for calling when they can.”4 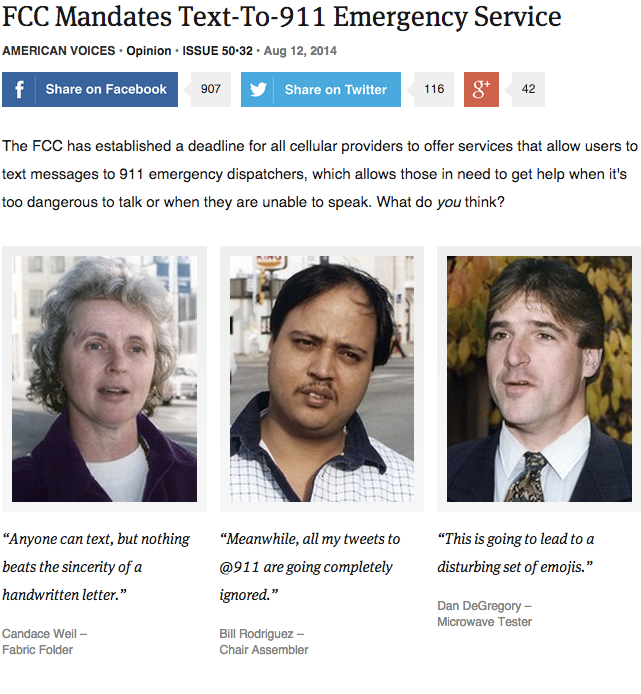 Image from satirical magazine The Onion
In Indiana, The State Treasurer’s office, which oversees 911 services, launched a series of radio public service announcements with the message “B4 U TEXT, VOICE IS BEST.” Two announcements were released in May 2014 as part of an initial phase of awareness-raising, explaining that text-to-911 was coming to “most areas,” and would be “of great help to the deaf and speech impaired, and in other select situations.” Then, in September, a third announcement blanketed radio stations in Bloomington, West Lafayette, and Muncie (homes of Indiana University, Purdue University, and Ball State University, respectively). This third radio spot belied any claim that text-to-911 would be, in the words of The Washington Post, “911 for the texting generation,” or that it would offer what CNET described as a “useful way to help the younger demographic that feels more comfortable texting than calling.”5 Instead, following the basic “voice is best” message of the May spots, it introduced a contest component, asking listeners to take the “911 voice is best pledge” by texting “VOICE” to a different number for a chance to win a pizza or MacBook. It concluded, “Remember, your voice matters. Use it in an emergency. 911. Before you text, voice is best.”

In short, text-to-911 in Indiana was introduced primarily as a benefit for those in situations in which speaking would be unsafe, and as an accommodation for people with hearing or speaking impairments. Indiana is estimated to have nearly a quarter million d/Deaf residents, and Barry Ritter, executive director of the state 911 Board explained to the Indiana Daily Student that “It was our focus that the sooner we could begin offering text-to-911 services at https://grademiners.com/book-report, we would be providing equal access to the deaf and speaking-impaired.”6

The emphasis on direct access to emergency services for d/Deaf and speech-impaired individuals is laudable as a means of extending access to telecommunications media. Certainly, this is an improvement on the retrofitting of technologies and services that has historically characterized access to media by people essay writing with various disabilities.7 Wentz, Jaeger, and Lazar argue that such retrofitting is encouraged by disability laws, which offer numerous exemptions and rely upon individual complaints for enforcement, thus offering very little incentive for policymakers or media industries to consider disability needs prior to the development of new media forms or technologies.8

“Universal design” offers a more inclusive approach, which would take into consideration the needs of people with disabilities or other non-normative bodies or needs in the development phase of new technologies or structures.9 One of the benefits of universal design, dating back to its origins in architectural fields, is that it produces benefits for all users. For instance, curb cuts help wheelchair users and are also beneficial for people using strollers, dollies, or on roller skates. 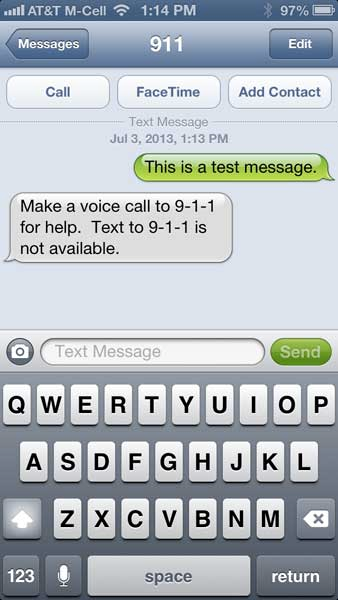 Image of a bounce-back message, as published on Dispatch Magazine
Text-to-911 would seem, at first glance, to be a potential triumph of universal design in telecommunications. Enabling this service would extend access for some people with disabilities, make it possible to alert emergency services in situations in which speaking is dangerous, and could potentially encourage usage by young people and others who use text messaging as a dominant mode of interpersonal communication. Yet, the limitations suggested by both the FCC and the Indiana roll-out indicate that mass usage of text-to-911 is still quite a ways off, as PSAPs slowly prepare for this new service while relying on the legacies of landline voice calls.

The instructions offered by texTTY are illustrative in this regard:

“Select ‘create a new text message’. Put 911 in the to: field. Put your emergency and your location in the message body. Do not attach or send pictures or videos. Keep your message short and do not use abbreviations.”10

In the interests of simple implementation, images, videos, emoji, abbreviations, and other standard elements of contemporary text messaging culture are expressly forbidden. It is unclear what, exactly, would happen were a PSAP to receive a text message featuring an image of illegal activity. Yet, this might easily be the first impulse of a user – d/Deaf or hearing – sending a text from a tense situation in which typing a longer message could attract attention. Even as the spelling of Indiana’s “B4 U TEXT” public service announcements acknowledges that texting involves unique cultural literacies, the expectations of emergency call centers (and their technologies) rely upon standard written communication or equivalence with spoken messages.

Finally, text-to-911 fails as an example of universal design in its limited, and gradual roll-out. Mobile devices are increasingly central to daily life; the Pew Internet and American Life Project reports that roughly 90% of adults own a cell phone, and 81% of adults use their cell phones to send or receive text messages.11 These numbers are fairly consistent along racial demographic lines, and vary only slightly by urban or rural location. Yet, in Indiana, it is the urban and more racially diverse cities of Indianapolis and Gary that are lagging in implementations of text-to-911. Even in Bloomington, there was concern about the unknown volume of texts that could be received in a town with a large undergraduate population, resulting in a slight delay in implementation. Thus, in areas that might be expected to have high demand for these services, there is little availability, likely leading to a depression of awareness and use that may persist long after text-to-911 services become fully operational and work against the inclusive benefits of such a technology.

The potential benefits of text-to-911 are enormous, for people with and without disabilities and in a variety of contexts. Yet, instead of functioning as an exemplar or universal design, text-to-911 looks to be hampered by its historical roots in landline technologies, its lack of cultural flexibility, and its attempts to discourage use of this service outside of specific cases. Though there are practical concerns to implementation, the narrowness of text-to-911 seems likely to limit its utility rather than to enable a real advance in telecommunications capabilities and relevance.