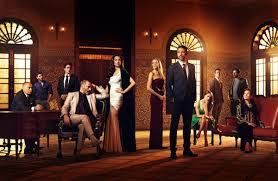 The cast of Tyrant.

One of my favorite insights into the academic mind comes somewhere in the middle of Steven Soderbergh’s madcap, post-modern assemblage, Schizopolis. A professor, appropriately old and inevitably white, sits in a field wearing his most pretentious blazer. An interviewer asks him a question. The professor is shocked. He is appalled by the inquiry’s simplicity, its baseness. Not sure where to begin, he asks the questioner “Haven’t you read my manual?”

The professor’s response is a beautiful externalization of how I, and a thousand or so other sleeve-patchers, felt this summer as FX rolled out its original series Tyrant. A high-end drama set in the fictional emirate of Abu Din, the series asks the viewer to consider how the Arab Spring might have looked like if everyone involved had the midriff of a P90X background exerciser. The cooling of its once hot topic notwithstanding, Tyrant’s attention to Middle Eastern politics was intriguing, particularly to those of us who make a living teaching about race and representation in the media.

But oh, oh my, did they not read our manuals. For all of the careers and trees we have devoted to critiquing the West’s penchant for reductively representing the Middle East, the people behind Tyrant couldn’t be bothered to think for a moment about the political implications of their sounds and images. Or maybe they could. Perhaps the producers sent their fleet of comm major interns to the library and had them check out Orientalism and Reel Bad Arabs and Unthinking Eurocentricism and everything else on the subject.1 And then maybe the interns glued together the best bits, crafting a sort of anti-bible to be used in negatively guiding every possible production decision.

Where to begin? Perhaps with casting.

Tyrant features the evil prince Jamal, swarthy and accented, ready to kill an old man or rape his son’s bride if there’s nothing good on TV and no one new in the harem. The Palestinian-Israeli actor Ashraf Barhom, whose look blends nicely into the non-existent “Arabland” of Abu Din, plays him. Jamal, however, has a brother, Barry. He’s a doctor, a good guy. So, naturally, he’s played by Adam Rayner, a white, absurdly handsome man with features maybe Semitic-looking enough that your grandmother would assume the best if you brought him as a date to your cousin’s Bat Mitzvah. To reiterate, he plays Jamal’s biological brother. 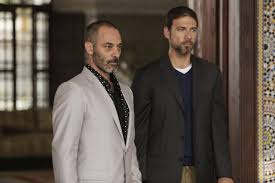 It’s an aggressive choice, offering a stark example of Charles Ramirez Berg’s scholarship on Hollywood’s insistence that protagonists must be white in order to encourage audience identification. It’s also part of a pattern in Tyrant.2 Jamal has married a conniving, hypersexualized, power-hungry woman, Leila. Moran Atias, plays her. Barry has married a naïve, adorable, life-saving surgeon named Molly, played by Jennifer Finnigan. You can probably guess which one spends more money on sun block. Of course, there are sympathetic Arab characters portrayed by Arab actors in the show. But they are pushed to the side, forced to play Tontos to Rayner’s Lawrence of a Lone Ranger.

There are also deeper, more discursively complex ways in which Tyrant lends itself to Orientalist interpretations. The Israeli writer Gideon Raff created Tyrant, a fact that only became more distracting as the show aired during the violence of this summer’s war between Hamas and Israel. As thousands of Gazan civilians died and Bibi Netanyahu blamed corrupt Palestinian leadership, Raff’s show offered perfect representations of Arab leaders who would deserve whatever pain the Judeo-Christian world can muster. Raff insists that the show wasn’t meant to be this way, that his vision was far more nuanced and sympathetic before the suits got their hands on it. This is, of course, easy to say and, if true, only passes the buck a few offices up at Newscorp. In any case, Tyrant’s content and timing slipped ever so naturally into the discourse of a joint American-Israeli effort to define and control the Middle East.

It is somehow silly to list these sins. They are so brazen, so unapologetic, that the critic perhaps feels a bit like G-d going through the motions of accusing Cain. Obviously, everyone involved knows what’s been done here. Us academics might not be omnipresent or omniscient, but enough of us can still afford cable that Tyrant could be pretty sure we’d be watching. And while they may not have read our manuals, these are smart, college educated people who can probably guess what they say.

This appeal to biblical morality seems hyperbolic because, of course, it is. However it brings me to a larger point. As critics we tend to look at something like Tyrant, with its absurd attachment to a Eurocentric universe, and reflexively declare it Not Good.

But what, exactly, is the nature of our judgment? Are we saying that there is something inherently wrong with such portrayals? Or are we arguing that such storylines and imagery are bad insofar as they encourage other, more morally significant bad things, such as imperial wars and neocolonialism? In ethical terms, are the sins of Tyrant “categorical,” such as G-d’s commandments at Mt. Sinai, or are they “consequential”—only wrong if they bring about bad results?

The scholarly tendency has been towards the latter, consequentialist school. Jack Shaheen (2012), who has spent more time on the issue of Arab representation than seems possible, argues that Hollywood’s consistently Islamophobic representations cause many Americans “and the U.S. Department” to “find it difficult to accept Moroccans, Palestinians, and other Arabs as friends” (p. 35).3 When I teach Said’s Orientalism(1978), I tend to fall into the same pattern, offering Orientalist perspectives in literature, science and media as a contingently negative things made truly wrong when the West use them as pretense to invade or extract resources.4

It is, of course, much easier to talk in terms of consequential morality, as it allows one to skip over the murkier aspects of our competing ethical codes and go straight to the big ticket sins of dispossession, rape, murder, etc. Watching Tyrant, however, I’ve come to think of this approach as a mistake, or least something of limited utility. It is a show that, almost as though it were trying, breaks every rule critical theory has attempted to articulate for representing the Middle East. And, yet, I’m not at all confident as to its consequences. Certainly, I could see someone watching the show, internalizing the vicious stereotypes and then happily voting for whatever candidate promises to obliterate Tehran. I could also envision the opposite. It would not take much for a viewer to see Tyrant and have a sudden realization about what their leftist professor with the neck beard was getting at all those years ago. There are, of course, a thousand positions in between. Perhaps the show reinforces cultural tendencies towards racism. Perhaps it will get viewers who never even considered the subject to take an interest America’s murky relationships with Abu Din-type places such as Bahrain, Kuwait and Dubai.

This, is not, however, a call to relativism. There is still the categorical option. Maybe, instead, Tyrant is bad in the way that a lie is bad. Yes, a lie might have negative real life consequences. But even when it doesn’t, it represents a violation and an act of deep disrespect. It is, according to some at least, wrong independent of its specific consequences due to our intuitive assumptions about the rights of our fellow human beings. While I’m not sure what to make of Tyrant’s real world impact, I can say with confidence that this is not how I think we ought to be talking about and representing other people of whom we have very limited knowledge.

This is a tough sell in today’s ethical marketplace. Speaking categorically invites its own accusations of cultural supremicism or, G-d forbid, theology. But our critiques risk losing their meaning if we refuse to think in these terms and to do so with a sense of transparency. And besides, we’re going to keep writing our manuals, one way or another. The FXs of the world may not read them, but for those who do, it is worth making clear the premises that underlie our critiques.