We already know the standard pro and con arguments for product placement: brands fill our lives, advertisers say, so it makes films more realistic when they feature those brands as well. But no, detractors argue, product placement only disrupts, stopping a narrative dead in its tracks when it appears.1 The pro/con discussion varies with usage and depends upon individual cases, so I don’t intend to argue for or against product placement. Plus, I think most viewers can distinguish between realistic, unobtrusive placement and shameless cynicism: between a character simply drinking a Diet Coke and the banality of a sitcom produced by and set at Subway restaurants. 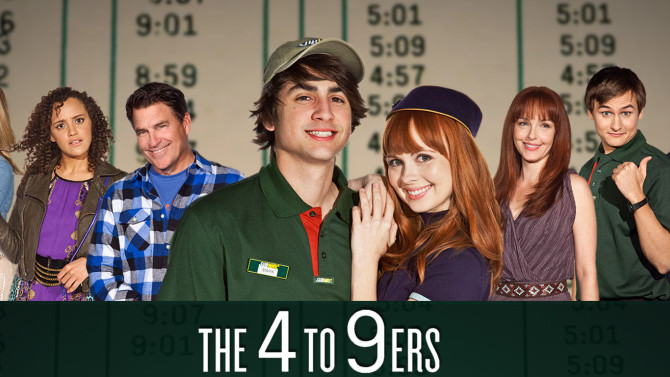 Subway’s original series, The 4 to 9ers

Instead, I want to move away from evaluating product placement as good or bad, realistic or distracting, and clarify what I experience when I see this practice employed: such advertising serves as an unwelcome reminder that so much of the entertainment that meaningfully fills our time, memories, and lives is made for profit. It’s not that we’re naïve enough to believe the opposite: we know that Hollywood filmmaking is a profit-generating business governed by economic decision-making, but we prefer that fact to remain hidden. Consider a related phenomenon: native advertising on the internet. We know that websites, like television and radio, are ad-supported, but we balk when we see web content labeled “paid post” or “sponsored content,” when we know, for sure, that advertisers directly produce content or make creative decisions. Furthermore, if we oppose such web ads, how much more strongly we respond when ads invade the news (which, we hope, is as objective as possible) or the dream world of cinema.

The better a movie is (whatever one’s criteria), the less we like to think of it as a commodity rather than a work of art; when we love or admire a film, we form a connection with it—aesthetic, intellectual, emotional—and to speak of the film as an industrial product seems to cheapen it. Yet product placement bluntly signals film’s commodified nature: it exposes the side of cinema that most films conceal.2 The branded products made out of films (merchandising) or seen within them draw attention to the disposable, consumerist junk of capitalism: sodas, cars, toys, shirts, fast food, housewares, etc. Yet merchandising and product placement rarely surprise us in tentpole films, contemporary Hollywood’s most unabashedly commercial form. After all, what else can you expect of films produced by Hasbro or Lego—or Disney? We’re then quick to make distinctions between Hollywood’s most commercial products and movies that matter as art—an idealistic distinction that, however false, we often make.

It’s convenient to fall into the same trap that early auteurist critics of the 1950s and 60s did: to view canonical films and filmmakers as outside history and to locate filmic value in the individual creator (director). And there’s a definite allure to such thinking: the idea of a great work, universal and ahistorical, surviving the test of time. That’s why the early auteur critics, eager to establish cinema as an art form on par with literature, painting, or theatre, insisted on the separation—the transcendence—of auteurs from socio-historical context. As Graham Petrie explains, “By distilling something called ‘personal vision’ from a film, and marketing this as the ‘essence’ of its success, it was hoped to evade all the sordid and tedious details of power conflicts and financial interests that are an integral part of any major movie project.”3 Such details, of course, are largely hidden from us unless we go in search of them. We can enjoy a film without knowing the myriad decisions that go into each shot or the financial constraints that affect what we see onscreen. A forward-moving narrative, engaging characters, and a credible diegetic world help efface, or at least postpone, such thinking about how the film is actually constructed, let alone how large a role economic incentives govern aesthetic decisions.

Yet the history of American cinema is the history of this balance between art and commerce, and it’s generally acknowledged that the scales have tipped toward commerce more and more since the heyday of 1980s conglomeration and synergy.4 Watch enough contemporary Hollywood blockbusters, and you soon find yourself channeling Norma Desmond: They took the idols and smashed them, the Hitchcocks, the Cukors, the Capras! And who’ve we got now? Some nobodies!

But not so fast: it’s easy to posit a mythical past, a golden age when the movies themselves mattered. That’s why it’s startling to learn about movie marketing techniques of Hollywood’s classical era in the 1930s and 1940s. Just like today, classical Hollywood used merchandising and product placement. The former method, what Charles Eckert calls “showcasing,” involved creating products—like dresses and cosmetics—based on the film, which would then debut simultaneously. The latter method, known as a “tie-up,” placed branded products in films and often included magazine and show-window displays as well. 5

Such marketing was often part of ballyhoo campaigns, which promoted films in ways that make today’s advertising seem lackluster by comparison. Here’s an example that sounds bizarre, but is quite typical: Fay Wray was the star of Universal’s 1934 film The Countess of Monte Cristo, and a dress she wears as the Countess was designed for sale in Macy’s Cinema Fashion Shop. To promote the movie’s premiere and the dress, Macy’s put out a radio announcement that the Countess herself would visit the store. A police presence was needed because so many people gathered, many present only because they heard rumors about a countess. The moment arrives: Fay Wray pulls up in a Pierce Silver-Arrow car (another co-promotion), steps out, walks to the Cinema Fashion Shop, and then asks to see the dress she read about in the newspaper that morning: The Countess of Monte Cristo dress. At that point, some realize it’s all a publicity stunt. Wray tries on the dress and then poses for photographs, which soon become the subject of new advertisements, news articles, and even a Macy’s press release.6 Marketers had a clear goal for such ad campaigns: to prime audience members (especially females) before they watched a movie so that they would recognize certain objects onscreen and immediately know where they could purchase those dream-world accoutrements. And it worked: by the late 1930s, over 1800 shops carried star-endorsed clothing lines.7

Product placement and merchandising, then and now, wouldn’t exist were they not effective. For example, jump to 1983, and producer Jerry Bruckheimer sees patrons leave a screening of Flashdance, walk across the street to buy the soundtrack album, and head back to the theater to watch the movie again, thus closing the loop.8 Fast-forward to 2014, and the Dunkin Donuts cups, Dreyer’s ice cream, Sony electronics, or Volvo SUV you see in Gone Girl should, in theory, prompt you to purchase such items. In fact, there’s no real difference between this Macy’s ad from 1934 and this Volvo tweet from 2014: 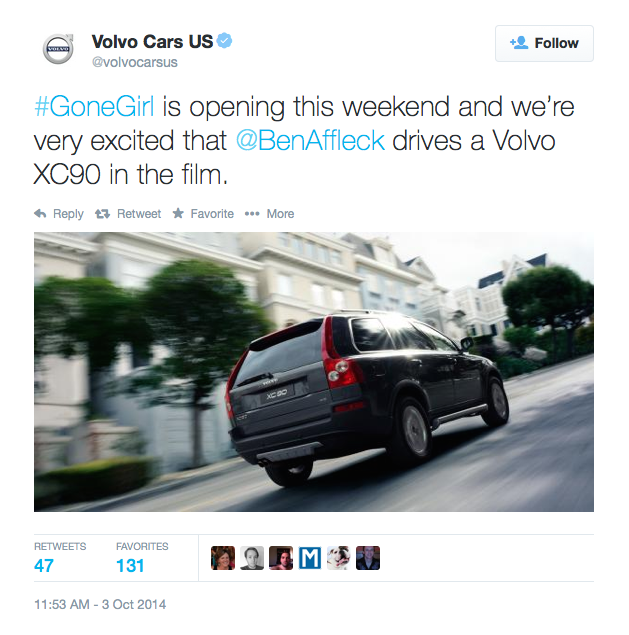 This comparison gets at what’s key here: when you combine the power, allure, and suggestiveness of the cinematic image with consumer products, the resulting effect is provocative in a way that a simple television commercial, magazine advertisement, or web ad could never be.9

My initial qualm about what product placement and merchandising do to the movies is perhaps misplaced; the real perniciousness of advertising, then, becomes not what it does to our media, but what it does to the spectator. Advertising shapes the movies that, in turn, shape us. On screen, we may notice individual branded products, but not realize marketing’s pervasive influence. As Eckert suggests in his essay on marketing, the very glamour we associate with classical Hollywood—luxurious settings, elegant clothing, gauzy close-ups, top-of-the-line furnishings, etc.—was manufactured by ingenious publicity departments and salespeople.10 And if that’s the case in the 1930s, today’s situation is enormously magnified: now that traditional market research has combined with big data, corporations have enough information about our lives, our past purchases, and desires (in fact, at least 1500 “data points” per person11 ) that they know us better than we know ourselves—and thus have the ability to craft works that appeal to what they already know we want.12 Or as Google’s CEO puts it, it will soon be “very hard for people to watch or consume something that has not in some sense been tailored to them.”13

Although I have focused here on advertising and movies, much of what I say applies to media in general, whether radio, television, the internet, or print news. The more the line between content and ads grows blurry, the more commonplace the practice becomes, and the more we’ll accept it—to the point where a branded reality is simply reality itself. When I see product placement in films, it’s still an uncomfortable reminder, but we may be nearing a time when such negative feelings disappear altogether. In his recent documentary for PBS’s Frontline series, Douglas Rushkoff interviews teenagers for whom advertisements and branding have become so naturalized (through the social media experience) that he cannot find anyone who knows what the word “sellout” means.14 Or as Morgan Spurlock wryly quips, there’s no more selling out; henceforth, there’s only buying in.