Streets Behind: Nostalgia in Community
Andrea Braithwaite / University of Ontario Institute of Technology 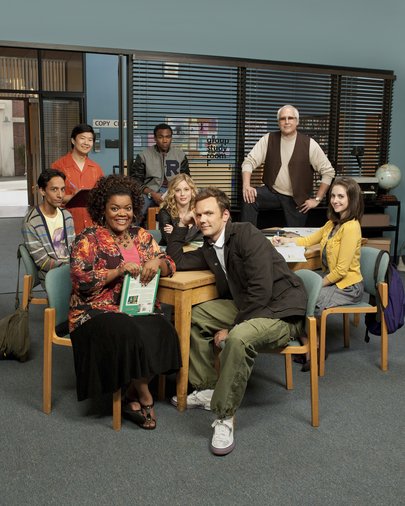 Shortly after NBC announced it wouldn’t be renewing its cult sitcom Community for a sixth season, I sat down to re- (re- re-) watch the series. I already miss the show – an apt reaction to a series that encourages nostalgia for a shared pop culture past. Through allusion and parody, Community chronicles how seven students at Greendale Community College evolved from study group to close-knit circle of friends. The show has even been called “perfectly postmodern television” for how it jumps playfully from genre to genre, self-consciously referencing cultural texts and trends along the way.

There is definitely pleasure in Community’s rapid-fire references; “App Development and Condiments” lampoons Zardoz, Logan’s Run, and Animal House, among others, to depict a social networking dystopia. Yet the series differs from Fredric Jameson’s characterization of postmodern mimicry as pastiche: a “blank parody” devoid of any critical or reflexive impulse.1 Instead, Community’s characters (and not just its audience) turn to pop culture for comfort and security, constructing meaning in the present by weaving together past texts. In doing so, the study group demonstrates what Jean-François Lyotard identifies as a postmodern “incredulity toward metanarratives,” a loss of belief in stories we use to explain and organize everyday practices.2 Family, romance, meritocracy – these types of narratives no longer carry the comforting weight of Truth; the patterns they predict and expectations they generate are frequently stymied by experience.

Nostalgia is an affect: not a quality built into texts, but our emotional response to a text. This response is heightened when we are reminded of a time when we believed things were simpler, easier, more comfortable, more secure. Nostalgia tells us less about the past and more about the present: “The simple, pure, ordered, easy, beautiful, or harmonious past is constructed (and then experienced emotionally) in conjunction with the present – which, in turn, is constructed as complicated, contaminated, anarchic, difficult, ugly, and confrontational”.3

Community’s study group nostalgically re-experiences past pop culture to work through current feelings of failure and inadequacy. In “Abed’s Uncontrollable Christmas,” for example, Abed imagines (and the audience sees) his reality in stop-motion animation, a striking visual homage to Rudolph the Red-Nosed Reindeer and Santa Claus is Comin’ to Town. The study group sets out to find the meaning of Christmas, a trip Abed warns will “test your commitment to Christmas, Wonka-style.” Half-hearted participants are booted from the mission (Jeff is devoured by humbugs who were drawn to his sarcasm), and their comeuppance chronicled in song, like those by the Oompa Loompas in Willy Wonka & the Chocolate Factory.

As the episode unfolds, we learn Abed’s mother (long divorced from his father), has given up their yearly tradition of watching Rudolph together – she has a new husband and child. Abed is attempting to preserve the importance of this experience so he doesn’t have to confront its absence. However, this is only “the past as imagined, as idealized through memory and desire,” a point driven home when Abed finds a box marked Meaning of Christmas, which contains the first season of Lost.4 As he explains, “It’s a metaphor. It represents lack of pay off.” 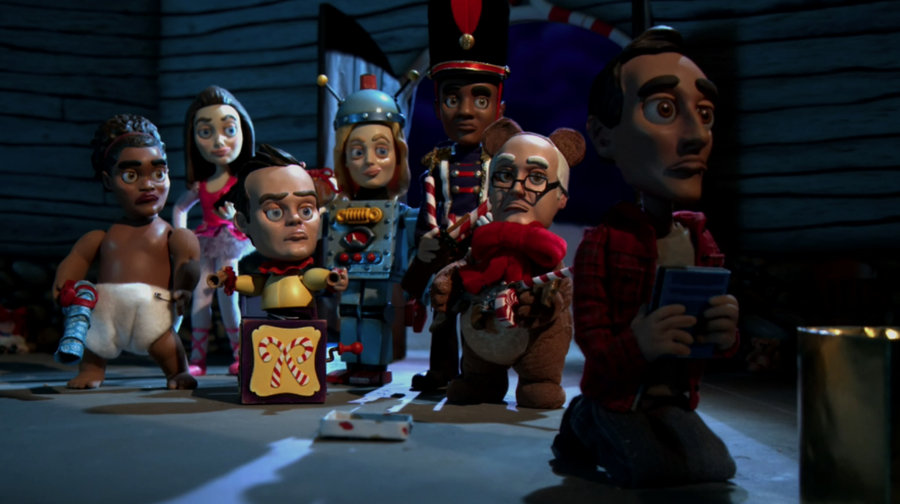 Abed finds the meaning of Christmas: season one of Lost

Similarly, in “Basic Human Anatomy,” Troy grapples with ending his relationship with Britta. Stuck between the known framework of a romance he no longer desires and the unknown fallout to their friendship if he ends it, Troy turns to the plot of Freaky Friday, convincing Abed that the two of them have switched bodies. It’s easier for Troy to lose himself in the possibility Freaky Friday represents: taking on the attributes of someone else to so that he is not the one navigating uncertain emotional territory. Like Abed’s imagined winter wonderland, this fantasy is ultimately unsustainable and its precipitating emotions unavoidable, as Troy eventually realizes: “I understand why you had to go high concept – because you’re scared – but Britta deserves better.” Troy and Abed switch back into their own bodies, and Troy and Britta amicably, if sadly, end their relationship. 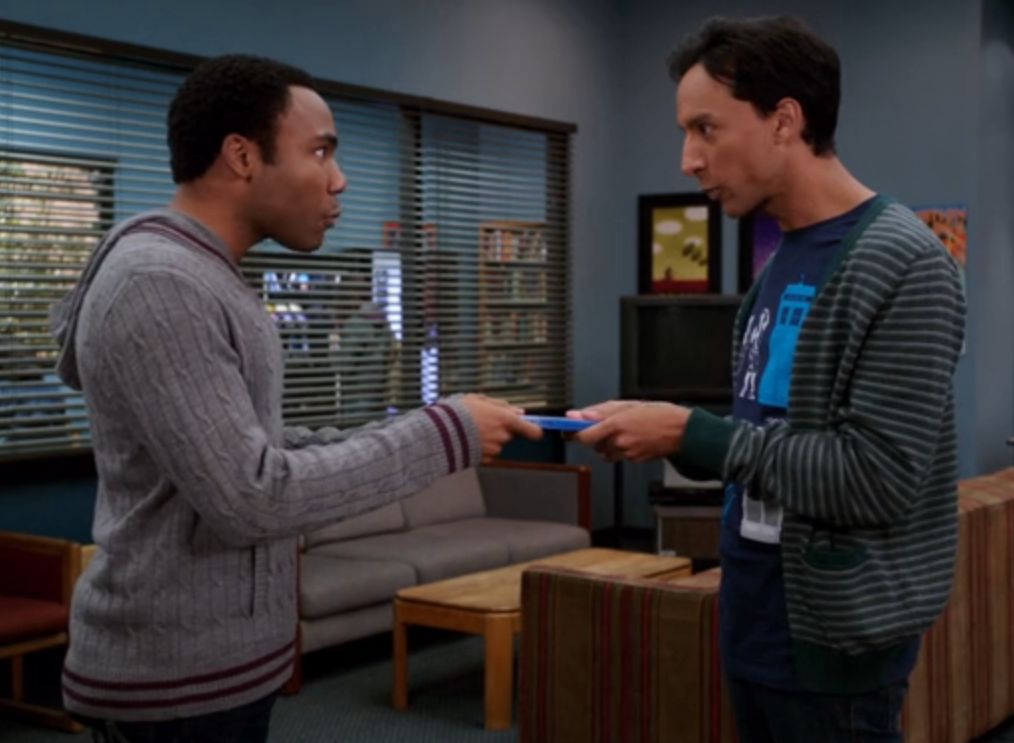 By the start of the fifth season Jeff has graduated, failed to get his own law office running, and returned to Greendale as an instructor. Highly anticipated by fans, this season’s “G.I. Jeff” episode deftly reproduces the look of the 1980s G.I. Joe cartoon series. At the centre of the cartoon’s story is Wingman (Jeff), a dedicated soldier who is suddenly lethal – a riff on the original cartoon’s large amount of gunfire with very few casualties. Wingman, along with Buzzkill (Britta), Tight Ship (Annie), and Three Kids (Shirley), get locked up in a cell, where they meet Fourth Wall (Abed). Fourth Wall insists that their lives aren’t real, something he discovered at a secret Cobra site named Greendale. 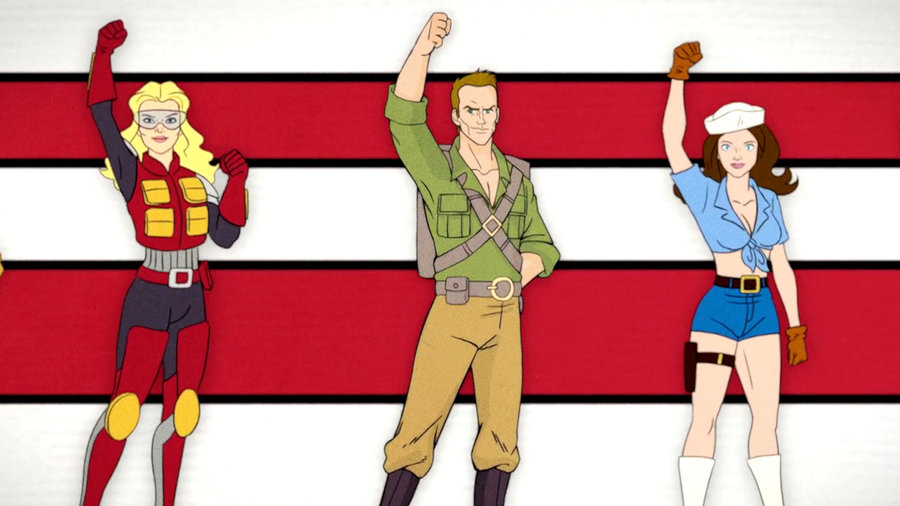 The very mention of Greendale makes Wingman black out; these moments are filled with parodic G.I. Joe television commercials in which children play with action figure versions of Wingman and his team (“It doesn’t hurt because it isn’t real!”). Both the cartoon and the commercials are hallucinations, from mixing a bottle of scotch with a handful of homeopathic “youth pills” as Jeff tries to run from the reality of his life at 40: “I’m not going back. I don’t want to be a middle-aged community college teacher. I want to be in G.I. Joe. I want to fight for freedom wherever there’s trouble – forever!” An “inadequate present and an idealized past” collide when Jeff confronts his changing career and self-identity.5

Popular culture is worked into the emotional heart of Community because these texts have real meaning for the protagonists. The study group uses narratives from their youth as a way to manage the fact that their present lives aren’t what they imagined. As Abed tells Jeff in “Anthropology 101”: “I can tell life from TV, Jeff. TV makes sense. It has structure, logic, rules, and likeable leading men. In life we have this.” Pop culture is how these characters make sense and meaning when other narratives – nuclear family, happily ever after, corporate ladder – have failed. In comparison to other postmodern television programs, Community anchors the nostalgic potential of pop culture references in the characters’ experiences of past texts. In doing so, it encourages the audience to remember a shared past as a way to empathize with characters whose dreams aren’t coming true, yet who keep going anyway. Or, as Jeff describes them, “the Traveling Wilburys of pain.”