The Price of Success: A Lament for the Unconference
Avi Santo / Old Dominion University

A week has passed since I returned from the fifth Flow conference held at UT Austin. Like with many successful conferences, I left having made some new contacts with scholars working in my particular sub-discipline of media studies; I left having reconnected with old friends, mentors and colleagues, reaffirming a certain bond that only those insane enough to pursue academia as a career share in common; I left having acquired some new nuggets of information, some helpful feedback on projects currently in medias res, and some necessary challenges to my unacknowledged assumptions about how media operate. In sum, Flow was a worthwhile three days with much to build on.

And I also left mightily impressed with the efforts made by the RTF Department’s current cohort of graduate students and faculty mentors, who clearly worked very hard to pull off an ambitious conference filled with special opportunities, including receptions, screenings and three core conversations with television industry insiders. Conference organizing is hard work that often goes unacknowledged (or worse, organizers are blamed for everything that doesn’t work, while the parts that do are shrugged off as having supposed to have been seamless to begin with). In truth, conference organizers play essential curatorial roles in shaping the dynamics for attendees, creating interesting panel configurations, controlling pacing within and in between panels, arranging the schedule in such a way that hopefully places panels in conversation with one another and allows those conversations to progress horizontally throughout the conference. I have said on more than one occasion that organizing the first Flow conference in 2006 provided me with insights that have carried over into other aspects of my career, including designing course schedules, lesson plans, and even assembling committees. I’m confident this year’s organizers will take away similar lessons.

So, that’s that. The conference was a success both for me and for the organizers. I’m certain many of the attendees feel the same way. Kudos!

And, yet, even with all this goodwill, I am left feeling unsettled about the entire experience.

Let me preface this part of my post with some necessary caveats:

1) I co-created the Flow journal (with Dr. Christopher Lucas) and the conference concept (With Dr.’s Lucas, Michael Kackman, Allison Perlman, and David Uskovich) while I was a graduate student at UT, and there is most definitely a part of me that still feels a sense of stewardship over both entities that somehow entitles me to wax nostalgic about the so-called good old days and always colors my experience of what has come since. I know that isn’t fair.

2) Austin and UT have both changed a lot in the 9 years since I earned my PhD, and I’ll admit that I felt somewhat alienated from a city and a campus that I once felt deeply attached to and that this disconnect was a bit unnerving for me (I know that some of my fellow returnees had very different responses to their homecomings)

3) Since leaving UT for Old Dominion University, I’ve been involved in several initiatives that place curatorial work and community building at the forefront of academic practice, including MediaCommons (http://mediacommons.futureofthebook.org), all of which have had me thinking way too much about sites of social experience.

4) I am admittedly a curmudgeon

So take the following with grains of salt.

When I returned home after this year’s conference and my departmental colleagues asked me to recount my favorite parts of the experience, I told them about an extended lunch conversation I had with Courtney Brannon Donoghue and Kimberly Owczarski, where we discussed the different institutional cultures wherein our approaches to media studies were embedded; I told them about a brief conversation in the hallway in between panels with Shawna Kidman and Kathryn Frank on the adaptation of superhero properties to television and the new type of embedded fan embodied by showrunners and other industry insiders; I told them about a fleeting exchange with Aymar Jean Christian about a local queer hip-hop festival happening in Austin the same weekend as Flow, which made me wonder about the different performance circuits and venues for this subgenre. In other words, I didn’t talk about the roundtables or the core conversations, but instead I focused on the moments in between them. Normally, this wouldn’t be such a big deal for me – many of my more meaningful moments at conferences typically happen in the interstices – but Flow was purposely designed to privilege the hallway conversations and bar chats; to reproduce the best graduate seminar we’ve ever had where ideas multiply and mutate as classmates are inspired by one another to re-imagine the field. Hence, I found it somewhat ironic that the parts of Flow that left the greatest impression on me were precisely the parts that weren’t part of the official conference experience. At the end of day, Flow felt just like another conference.

Of course, that isn’t really true. There were no papers delivered. Roundtables felt more like workshops than panels. The time allotted for presenters to articulate their positions and for audience Q&A was inverted. These are significant transgressions of the typical conference setup. But in its effort to build on past successes and innovate on an “unconference” format that has become more common since 2006, my impression is that this Flow was going for “bigger is better.” That’s a shame, because the conference’s appeal was always its casual intimacy.

Some of this boils down to where the event was hosted. The first two Flow conferences were held in the Texas Union, and while it was not a perfect setting – The Texas Governors’ room had a long rectangular table in the center and four dozen chairs lining the periphery, which created an unintended asymmetry that literally required roundtable participants to have their backs turned to the audience – the venue still felt fairly informal (despite the Union’s stateliness). The Student Activity Center was built to host conferences, but not an unconference. The big halls on the SAC’s second floor felt cavernous and gave the roundtables an unintended rigidity and restrictiveness because of their lecture-hall design. The smaller rooms on the third floor were admittedly better, though even there, more thought might have been given to how to set them up, especially as tables and chairs were not locked down. Reproducing a standard “panelists facing audience configuration” felt very… standard. 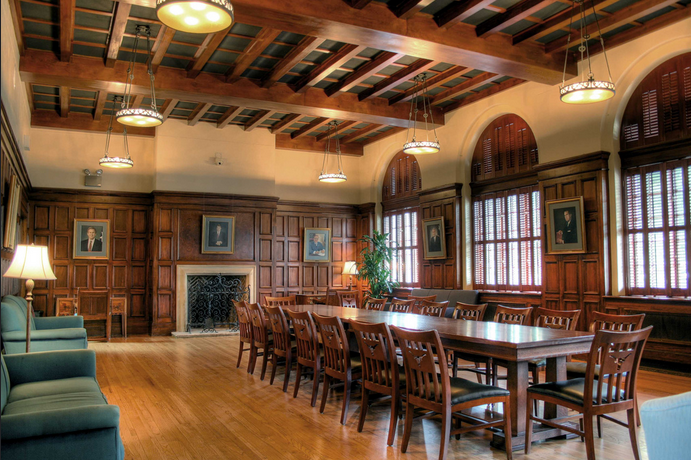 The Texas Governors Room, in the Texas Union at UT, where the roundtables of past Flow Conferences have been held

One suggestion for Flow 6.0 might be to think carefully about conversational spaces and how those facilitate innovative forms of scholarly engagement. For me, future roundtable spaces might include living rooms and park benches; they might encourage group work or offer conversational stations (imagine speed dating for media scholars) that participants can move in-between at will. 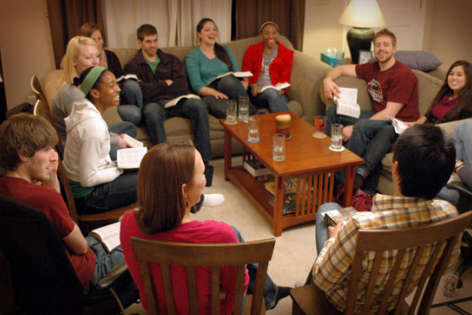 The next Flow Conference should consider conversational spaces like living rooms… 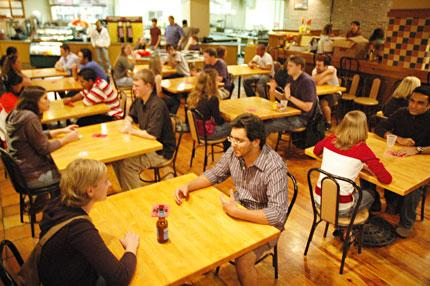 In much the same way that unconferences like THATCamp have unofficially borrowed from the Flow concept, perhaps Flow might take a page from the digital humanities and consider introducing a riff on the “hack and yack” format, where TV scholars are tasked not only with critical conversation about television’s past, present and future, but actually with proposing alternate production, distribution, financing, programming, and reception models.

Just as “unconferences” like THATCamp have pulled from the Flow model, perhaps it is time for the Flow Conference to look to digital humanities for future inspiration

Another source of ambivalence for me were the core conversations. Admittedly, it was great to hear industry insiders tell their versions of where television is going, and while their musings were largely anecdotal, anyone doing production studies-type research was bound to take away something useful from the trade stories, turf marking, on-the-ground theorizing, and semi-public disclosures these folks produced. If Flow continues down this path, I strongly encourage inviting a more diverse set of working professionals – there was one woman among ten participants, and everyone was Caucasian – and maybe even a juxtaposition of conversations with industry people and “fan-trepreneurs” (to quote Suzanne Scott). More than mere diversification though, I hope that conference organizers consider integrating non-academics within roundtables. In 2006, we tried very hard to socially engineer the right mix of scholars, fans, critics and professionals on roundtables. We were far less successful in doing so than we’d hoped (though there were a handful of fantastic exceptions). But I’m not certain that our failures should result in retrenchment back to older hierarchical paradigms. Bringing the industry to the academy (as well as policymakers, advocacy groups, fans and media entrepreneurs) is a fabulous idea, but in the spirit of flow, “core conversations” really need to be about rethinking who constitutes the core and how conversations are configured.

I realize that this post seems more critical than celebratory. I am perhaps too close to the Flow concept to be impartial. Let me end on a softer note. Flow is a great idea, and it is one that has inspired several generations of UT graduate students to try and re-imagine what the conference ought to be about. The 2014 edition was no exception, providing many nice touches that demonstrated outside-the-conference thinking. I hope that my critiques will be taken as a sign of my engagement with the incredible efforts and ideas that were produced and a genuine enthusiasm for Flow to continue to experiment with new ways to unconference.