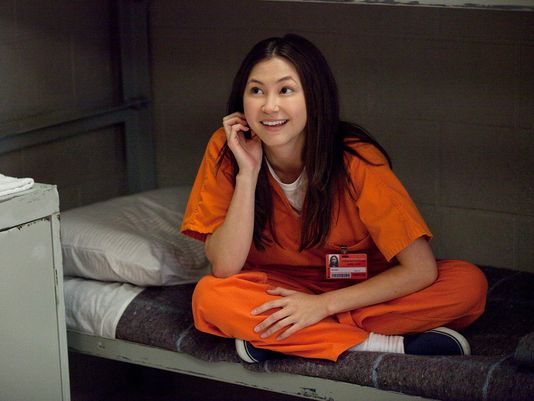 Brook Soso (Kimiko Glenn) on her first day in prison.

Intending to turn viewers into advocates, online prison reform campaign #humanityisthenewblack emerged with the second season of Netflix’s Orange is the New Black. With the New York Civil Liberties Union at the helm, the campaign shifts attention from the conditions of overflowing sewage and overuse of solitary confinement in the show’s fictional Litchfield Prison to the very real and detestable conditions at the jail in Riverhead, New York, where crews filmed parts of the second season. In addition to this type of effort by organizations hoping to gain support as a result of the show’s popularity, OITNB itself initiates a conversation about who can or should be an activist and/or ally in the fight for improved conditions in American prisons, and what methods they might use.1

If Season 1 fixated on Piper Chapman “[finding] herself” behind bars, Season 2 features numerous cast members with shifting moral compasses and character arcs that rival Chapman’s.2 The most consequential shift between seasons occurs when these characters decide to take action against the injustices within the prison, a concept that was virtually absent from Season 1. But as OITNB becomes more nuanced in its representation of prison activism, the show also takes its place in a long history of white benevolence on screen, from Mississippi Burning (1988) to Dangerous Minds (1995) to The Blind Side (2009). White inmates advocate for themselves and others, while inmates of color are too distracted by personal ambition to bother with the collective battles being waged behind bars, such as the hunger strike in protest of solitary confinement, unsanitary living conditions, and “compassionate” release for the elderly.3 With the exception of progressive-yet-naïve Brook Soso—who has Litchfield’s symbol of white privilege (a toothbrush at intake) bestowed upon her by Lorna Morello because “[she doesn’t] look full Asian”—OITNB portrays white saviors, in the form of sympathetic white correctional officers and selfless white prisoners, as the only legitimate forces in a fight for reform.

According to OITNB, women of color impede the reform work of white women. After black inmate Janae Watson returns from her latest stint in solitary confinement, her white friend Yoga Jones crosses Litchfield’s increasingly regulated racial lines in order to offer comfort, and to tell Watson that the arbitrary use of solitary “got [her] motivated to join the hunger strike.” Watson does not respond with the gratitude that Jones expects. Instead, she tells Jones, “I’m not here to make you feel good about yourself, alright? You got guilt about something, that’s not my problem.” Like many of the show’s potentially instructive confrontations between white women and women of color, the scene quickly shifts from a critique of white benevolence to a critique of black ingratitude, undermining the legitimacy of Watson’s accusations. As Watson tells Jones not to talk to her anymore, ending a friendship that formed in one of the first season’s most evocative moments, viewers are not permitted to linger with Watson, who has been brutalized by SHU over and over again across the show’s brief timespan. Instead, her face appears blurred on the edge of the frame while the camera rests on a close-up shot of Jones in disbelief. The scene ends with a white woman in tears, slighted by an angry black woman who is unwilling to accept an invitation to fight for justice and advocate for herself. 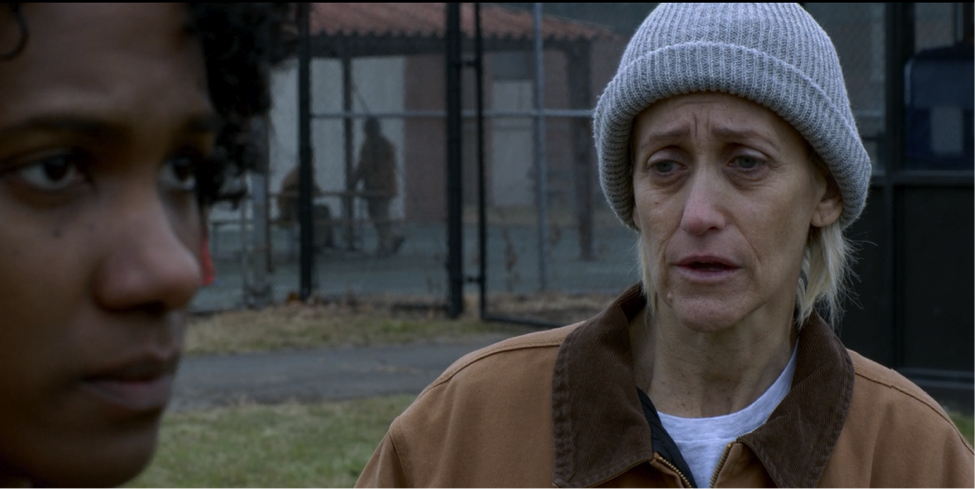 Jones returns to fellow strikers Soso and Ingalls, and white tweakers Leanne and Angie join them. Unlike Jones and Ingalls, the show portrays Leanne and Angie as inauthentic, particularly through the irony that their hunger strike demands involve the cafeteria food. When guards tempt the women with pizza, a tactic that prison officials actually use to break strikes, Leanne and Angie cave and eat to the delight of Ingalls, who reminds the more “respectable” strikers, “We don’t need them. They confuse our message.”4 OITNB pushes an activist ideal, and it doesn’t include women of color, drug addicts, or the poor: the majority of women serving time in America.5

Unlike Soso, Ingalls, and Jones, Piper Chapman’s entrance into the fight for prisoners’ rights at Litchfield is purely self-motivated. When journalist Andrew Yance visits Chapman to build his case against Natalie Figueroa’s embezzlement, Chapman refuses to help him. Although she claims to be an advocate for all of the programs that the prison has de-funded, she won’t risk her own release date for the good of the inmate population. Chapman’s determination to end Figueroa’s career comes at the heels of her furlough, when she convinces herself that Figueroa planned her transfer to a Virginia prison as a result of Healy granting her leave to visit her sick grandmother. By this logic, her white privilege is a burden, and she rides these delusions of victimhood into the fight against corruption.

No one—not Nance who schools her on the real ways that the prison system is failing, nor Sophia or Poussey who each tell heartbreaking stories of lock-up without furlough when their parents passed—can convince Chapman that she does not deserve to be furloughed for her grandmother’s hospitalization. At a moment when the efficacy of “call-out culture” is being debated across social media, it fails utterly on OITNB.6 Piper’s privilege is called out repeatedly, and her response, after she becomes the first known Litchfield inmate to be granted furlough, smacks of privilege-denial, white guilt, and downright disrespect: “Yes, I am white. We have established that. And I got furlough too. I guess white privilege wins again. And as a speaker for the entire white race, I would like to say I’m sorry you guys got the raw deal. But I love my fucking grandmother. And yeah, she may be a whitey too, but she’s a fucking person. And she’s sick and she needs me. So shut the fuck up.”

Suzanne Warren throws cake at Chapman after her “white privilege” speech in the cafeteria.

Ironically, Chapman is the woman ultimately responsible for ending corruption at Litchfield.

Suddenly flooded with white guilt that does nothing to change the reality of her privilege, Chapman rushes to Healy’s office, wishing to give her furlough back because there are people “more needy” than herself. Healy absolves Chapman of her guilt as he assures her that her whiteness did not motivate him; rather, he acted only in innocent kindness. So when Chapman becomes the inmate to dismantle corruption at Litchfield— rather than, say, Janae Watson—OITNB becomes yet another representation of whiteness stepping up and saving the day, this time for a prison populated mostly by women of color who are written out of the stories of their own struggles against oppression.

In his personal transition from heartless to bleeding heart, Officer Joe Caputo undergoes the most dramatic change of all. In Season 1, Caputo shows newly hired guard Susan Fischer the ropes; or rather, he shows her how to tighten them. His advice on how to maintain authority as a prison guard: “It helps if you don’t use their names. Just say “inmate,” like they’re all the same to you. It reminds them they’re not really people.” In Season 2, the same Caputo complains to counselor Sam Healy that “[he] would really like to report to someone who gave a shit about these women who [they] are supposed to be taking care of.”

Chapman helps Caputo bring Figueroa down, and by season’s end the show assures viewers that the human rights abuses are over. Sure, Caputo might have a few headaches in his new position as executive assistant to the warden, but as Chapman reminds him from her cell in a segregated block (where he put her), “You’re a good person. And Miss Figueroa, she isn’t.” For Chapman it’s that simple: trade bad administrator for good administrator, and Litchfield can become a functional correctional facility. 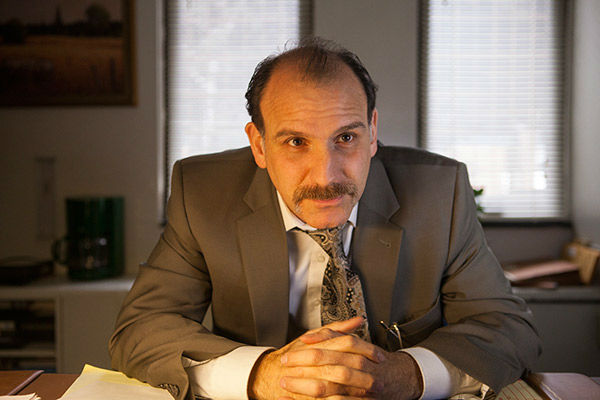 On the final episode of the season, Soso tells Chapman, “I don’t think I’m going to be the same when I get out.” Still wedded to her oft repeated, politically correct but incredibly misguided sentiment that she is “no different from anybody else in [prison],” Chapman suggests that, “maybe that’s ok.” For Chapman, prison is a place to improve herself and to “read all of the books on [her] Amazon wishlist.” Thankfully, Soso’s abbreviated response puts Piper’s delusions about prison’s efficacy to rest: “No, it’s not fucking ok.” She’s right. It’s not.

American media outlets inundate viewers with prison “entertainment,” from OITNB to Beyond Scared Straight to MSNBC’s marathon broadcastings of Locked Up.7 Meanwhile, the prison system itself is broken and dysfunctional, and we must start demanding that #humanityisthenewblack in the face of its atrocities. We can hope that the show inspires prison reform movements and prison abolition. But we must also hope that the actions of those non-incarcerated and/or white allies against this system of oppression take forms foreign to those of the white savior industrial complex played out on Orange is the New Black.8