The Reign of Whitey is Over?
Christina Belcher / University of Southern California 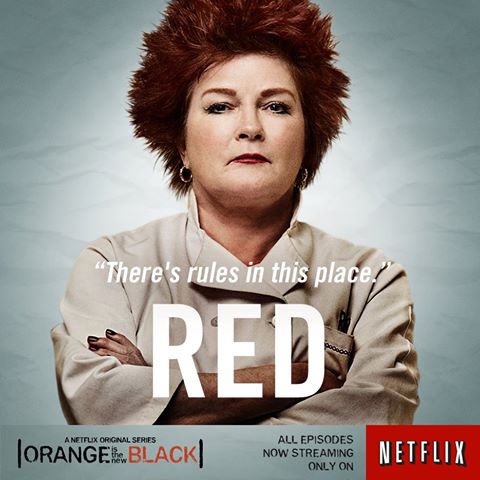 There are three types of “mothers” on the second season of Orange is the New Black. The first protects her family at all costs, maintains her business ventures behind the prison’s walls, and deals in lipgloss and Jolly Ranchers. She refuses to sell more lucrative, dangerous contraband like cigarettes and matchbooks. The second type of mother claims that her daughter’s rape by a prison guard (or two) was the best thing that ever happened to her because she could sue the government for putting her in harm’s way, and simultaneously collect child support and extortion money from her rapists. In return, she wants only to be remembered when the checks start rolling in. The third type seduces and sleeps with her “son,” then sends him onto the street to die by the hand of a crooked cop. This kingpin mama ensnares all of her “children” in a prison heroin trade and provides a mother’s comfort after they’ve returned from the SHU, punished for involvement in her dealings. Even on OITNB, a show applauded for its diverse and developed cast of characters, it is easy to guess which of these “mothers” is white, and which are women of color.

With Pennsatucky defeated and defanged—quite literally, since her new teeth diffuse her power to provoke—the torch of villainy must be passed to another character. Viewers meet the worst of the mothers and second season’s villain when police incarcerate Vee Parker for her role in a drug trade that preys upon dispossessed children to work distribution. Considering its progressive, purportedly anti-racist ethos, it is surprising that the villain role shifts from white to black between seasons.1 But when an affable, middle class, whip-smart black queer—Poussey—emerges from the background to become the season’s romantic hero, whose objective is to save Taystee—the damsel in distress—from evil Vee, the racial grounds of the show shift to allow for black villainy without appearing blatantly racist.2 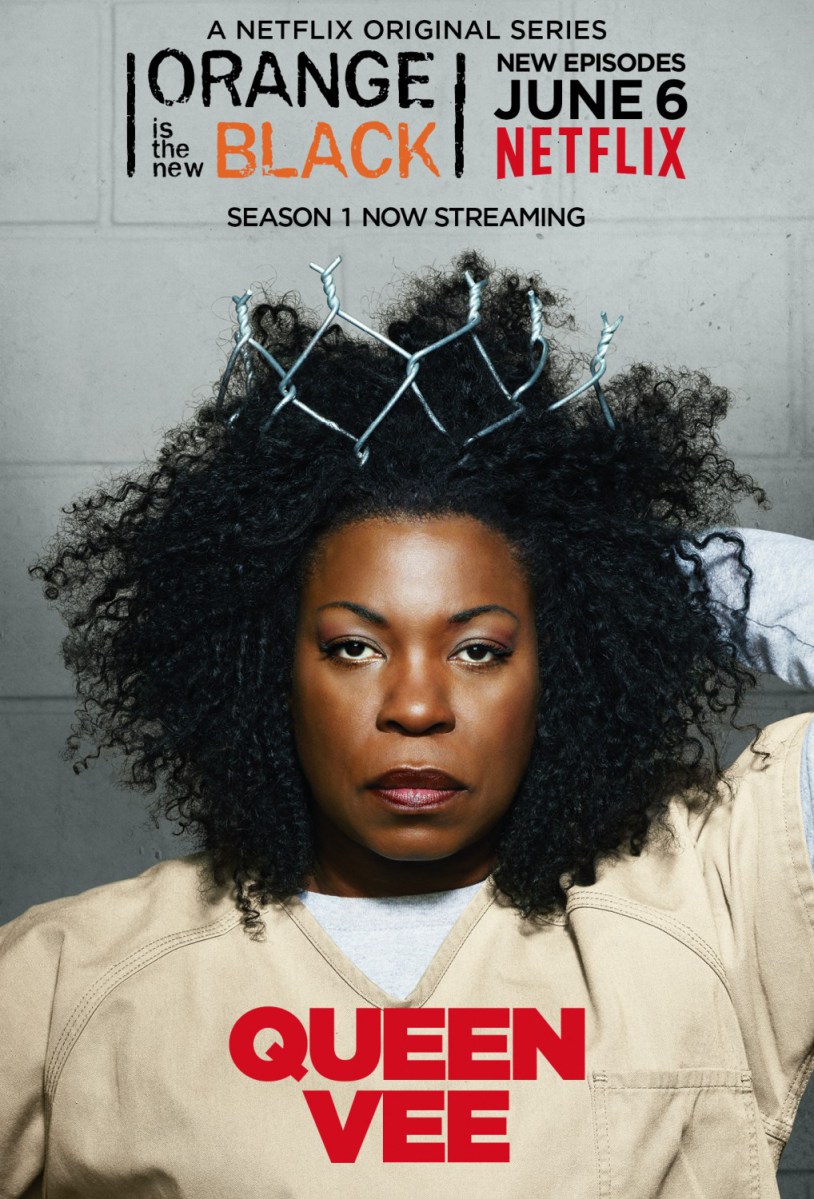 And yet the show’s portrayal of black female ambition is nothing short of that critique.3 Vee Parker embodies many of the terrifyingly destructive slurs that white supremacist culture hurls at black women, and particularly black mothers. Physically, psychologically, and sexually abusive, Vee uses her “children” to earn a buck, she has no moral objection to abandoning them. She also causes white misery, since the white women in Litchfield seemed to have no access to heroin for a clean stretch before her return. The show reminds viewers on several occasions that Vee is homophobic, as she pushes an anti-gay agenda in order to gain Taystee’s loyalty over Poussey. In an interview with investigators after Vee has “slocked” Red in a turf battle, white inmate Lorna Morello sums Vee up: “[S]he’s the one that made things hardcore. It’s not like prison was summer camp, but we all sort of got along. At least nobody was trying to kill each other. Now it’s like Serbo-Croatia up in here.” 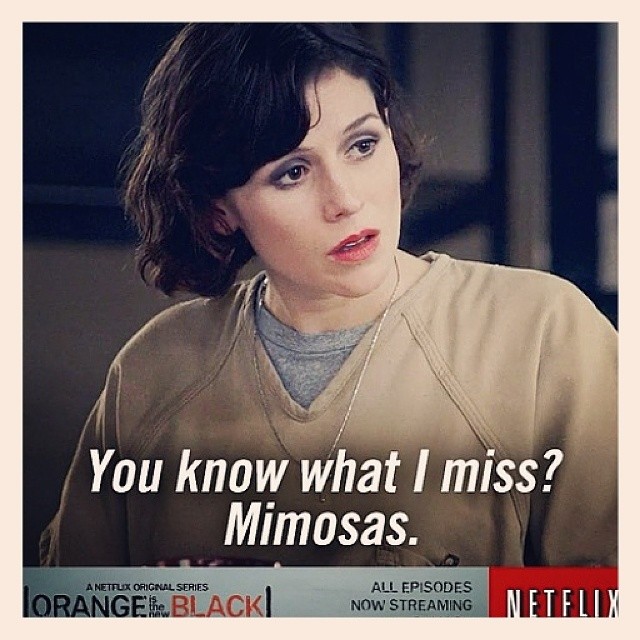 If season one pitted progressive hero, WASP Piper, against villainous Jesus freak Pennsatucky in a battle of epically white proportions, how is the second season’s black hero qualified to fight the good fight against Vee? OITNB continues to wage class warfare, and Poussey wins.

The difference between Poussey and the other black women behind Litchfield’s walls is class, and with higher class, the redemptive power of education.4 While not nearly as privileged as Piper Chapman, Poussey Washington’s flashback reveals a worldly kid with a frohawk, a fluency in German, and a family who supports her as a queer teen in an interracial relationship. Her hardships are unlike those of her girls, Cindy and Taystee, whose early lives involved teen pregnancy, absent parents, and abuse. Poussey’s visibly queer performance of blackness certainly had more to do with her landing in jail than the low-level criminal activities in which she was engaged. Poussey’s crime—selling marijuana—is hardly deserving of the six years she was sentenced, and her flashback shows the crimes committed against her—homophobic in nature—are more harmful than her own dope dealing.5 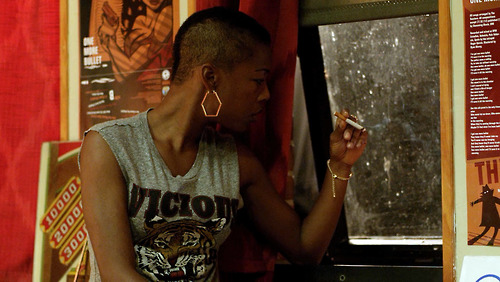 Samira Wiley as Poussey Washington, a heartbroken teen smoking by her bedroom window

We see the class distinction most clearly in Season 1, when Taystee cycles back into prison after only having been out for a few weeks. Taystee explains her non-existent safety net to Poussey, who is incredulous and angry with Taystee for re-offending, never having personally experienced a lack of support on the outside.

In Season 2, after they re-establish the friendship that Vee tore apart, Poussey wants to talk about their journey. Taystee claims that because she “never learned all that,” the discussion of feelings makes her “want to jump out of [her] skin.” Class-based coping mechanisms aside, what Taystee and Poussey share is humor, and later in the final episode, they take on the voices of their WASP alter egos—MacKenzie and Amanda—in order that Taystee can comfortably discuss the reasons why she fell back under Vee’s spell. Imitating the voice and affectation of an upper-class white woman, Taystee jokes that “Amanda has a theory: that it’s all the cycle of poverty, and the bad schools and the government cheese, and because I’m brown and my mom was on crack.” Then her affect changes back to Taystee, and she distances herself from WASP “Amanda,” explaining, “But I think I was just being an asshole.” 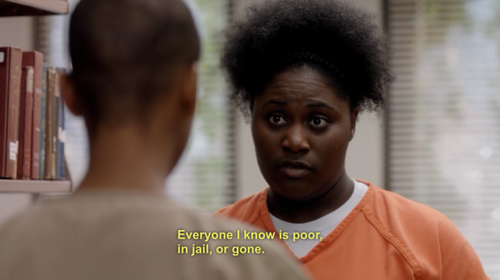 Danielle Brooks as Tasha ‘Taystee’ Jefferson, explaining her experience upon release from prison to Poussey

Poussey reveals her own class privilege, aligned with her alter ego MacKenzie, when she explains, “MacKenzie thinks its repressed frustration cause you ain’t never been to Paris.” While her humorous reasoning pokes fun at a Gwyneth Paltrowesque excuse for Taystee’s recent trip down criminal lane, Poussey’s vocabulary and accent are her own. She is marked—by her lack of understanding of the cycle of poverty, the skills she learned as a member of the black middle class, and her refusal to run drugs in the prison—as other to Taystee and the crew. In contrast, Taystee’s imitation of white girl Amanda is only that—an imitation—while Poussey falls upon a particular intersection of race, class, and sexuality that primes her for OITNB heroism. In the hierarchy of blackness on OITNB, Poussey is the middle class, queer hero, Taystee is the downtrodden damsel primed for redemption, and Vee is the black dragon, slain at season’s close with no remorse.

Despite the ethic of multiculturalism that pervades OITNB, there is no expectation that viewers sympathize with Vee. Never given the justificatory flashback that the show afforded even Pennsatucky, viewers cannot understand Vee’s violent ambition to control the market. She is a financially motivated black woman, but she is not the rightful recipient of capitalist incentives.6

According to neoliberal logics, the marketplace is the great equalizer. Vee participates in this fantasy, and believes that she has as much right and access to the market as Red, the white woman who has run Litchfield’s contraband trade for years. Yet Vee is wrong to think that the market exists for her. Returning to Angela Davis’s essay that I referenced in my last column: “With the dismantling of the welfare state… the institution of the prison – which is itself an important product marketed through global capitalism – becomes the privileged site into which surplus impoverished populations are deposited.” 7 Cindy, once one of Vee’s enthusiastic supporters, fails to understand her role as a deposit, not a capitalist player, within this equation: “Drugs in a prison ain’t the craziest thing that could happen. I’ll tell you what is though. [Red] opening a road and saying only white people can drive on it. Uh-uh. This America. The bathrooms may be segregated, but the market be free.”

Cindy is wrong. The market is not free for illegitimate trade if the trader is not white. Season 1’s white male guard, George “Pornstache” Mendez, operated his drug trade without consequence, but black women behaving so badly would never go unpunished.8 The irony of the lines that Cindy delivers lies in the fact that Vee, Taystee, Suzanne, Watson, and Cindy herself all have a stake in them. As they gain financial power, each woman relishes in the respect they garner from the other inmates who once forced them to sit toward the back of the movie room, before “the reign of Whitey [was] over.” But each of the black women will pay for their transgressions against the racial order of things, with Vee in particular bearing the brunt of the violence.

If Season 1 used a poor white woman as a scapegoat for the myriad systemic issues that wreaked havoc on the women inside, Season 2 vilifies blackness and the prison system itself. As for the prison, the message through Season 2 is that “it gets better,” and there are various (white) forces working against the corruption and unfairness of Litchfield. Stigmatized forms of blackness, on the other hand, are irreparable, committing crimes against diversity, the market, and the spirit of sisterhood that show so often invokes. Meanwhile, as Poussey and Vee battle for Taystee’s loyalty in a struggle between proper and improper forms of blackness, Piper Chapman fights her own heroic battle to finally take down corrupt prison administrator, Natalie Figueroa. Although the focus of OITNB shifts to make room for the women of color who took a back seat to blondey in Season 1, Piper saves something much more important than one wayward “corner girl”: she saves the whole damned prison. The reign of whitey is not over.