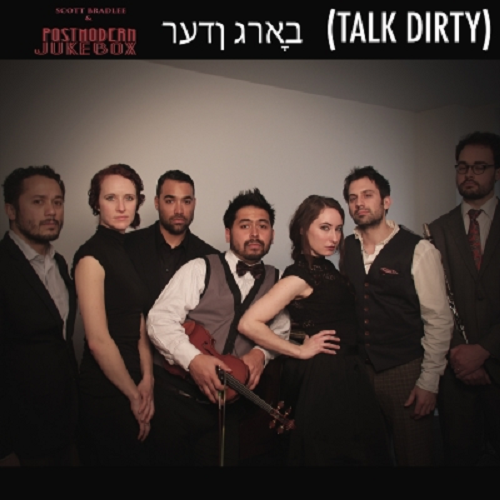 The Daily Beast ran an article recently in which it offered five suggestions to the music industry. Five lessons that it could learn from the resurgent television industry: target adults, embrace complexity, improve technology, resist tired formulas, and improve quality. Reading it, though, I couldn’t help but feel that while its lessons are good and the mega-conglomerates of the world should take notice, we have already seen these suggestions implemented by very talented musicians working outside the mainstream. Musicians who have used the tools of the Internet to carve out their own successful careers. Such is the case of Postmodern Jukebox, whose reimagining of pop songs in older styles have, in the course of a little over a year, led its founder, Scott Bradlee, to present TED talks and tour the US and Europe with his ensemble.

According to Bradlee’s website, his aim with Postmodern Jukebox is to “get my audience to think of songs not as rigid, ephemeral objects, but like malleable globs of silly putty. Songs can be twisted, shaped, and altered without losing their identities–just as we grow, age, and expire without losing ours–and it is through this exploration that the gap between ‘high’ and ‘low’ art can be bridged most readily.”1 When I first discovered Bradlee’s project I was struck by its name because it tied in nicely with a lecture I was already giving in my rock history classes about modern artists looking to the past for inspiration. By invoking the term “postmodern” directly in his ensemble’s moniker, he is directly stating the purpose: to recontextualize the music of the present by engaging in a dialogue with the past. Per the Oxford English Dictionary, typical features of postmodernism include, “references to, or the use of, earlier styles and conventions, [and] a deliberate mixing of different styles and media (often with self-referential or parodic intent).” Bradlee has claimed that he was never a fan of modern pop music, but when he began to explore it, he found artistic merit in it by changing the musical setting. By placing modern pop music in dialogue with the music that helped to influence it, he is helping to lay bare the complex processes by which our modern pop music has evolved.

This is how Postmodern Jukebox is in-line with the first two of the Daily Beast’s suggestions to the music industry: target adults and embrace complexity. Bradlee and PMJ are immediately targeting an older demographic who can recognize their styles and also understand the complex interplay of genres in his covers.2 This immediately sets PMJ apart from the modern music industry that it is deconstructing in that Bradlee allows us, the viewer/listener, to join him on his own process of discovery towards deeper engagement with the music he previously did not want anything to do with. PMJ exists in dialogue with the audience, he wants you to think about the song. An exceptionally clear example of these processes is the group’s klezmer rendition of Jason Derulo’s recent hit song, “Talk Dirty.”

One of the most identifying elements of Derulo’s hit, indeed it’s most interesting feature, is the extensive use of a sample from the Israeli band Balkan Beat Box’s song “Hermetico.” Derulo’s song uses the underlying beat and saxophone riffs, along with taking some lyrical inspiration from the original tune.

Balkan Beat Box’s influences are from traditional Jewish and Eastern European music, along with other styles from around the Mediterranean, and filtered through modern hip-hop and dance styles. So when Bradlee and Postmodern Jukebox got their hands on Derulo’s song, they essentially deconstructed the song, extracted its signature element, a klezmer inspired saxophone riff, and constructed their cover around it. They even took it a step further by translating 2 Chainz’s rap verse into Yiddish and placing it in the song’s middle section which begins slow and accelerates, a typical convention of klezmer songs, further manipulating the original song to fit the structure of the covered genre. While Bradlee was seemingly unaware of all of these musical connections when he started on the arranging process, his musical ear would have recognized the style of Derulo’s saxophone riffs, which is why he states that it was the “perfect” choice for a klezmer style cover.3

And this is what separates Bradlee and Postmodern Jukebox from the thousands of YouTube video makers who perform covers of pop hits. Bradlee takes the tunes and rearranges them, changing almost everything about their musical settings until only basic melody and words remain recognizable (and sometimes even the words have been translated into a different language). Everything else about the song has been morphed into the new style. So in this way he is following the fourth and fifth suggestions in the Daily Beast article: resist tired formulas and invest in talent and quality. By collaborating with numerous talented singers and instrumentalists, Bradlee is diving into the deep talent pool that exists in the musical community, imbuing his covers with a level of talent and polish that is sometimes lacking in the standard YouTube cover video.4 And while the formulas that Bradlee is writing in might be old, they are not tired and worn out.

In fact, Bradlee has shown that there is still life in Motown, New Orleans Jazz, and the other styles he writes in. So much so that some might say he has actually improved upon the originals. This is obviously a subjective opinion left up to the taste of the individual, but consider the case of Katie Perry’s “Roar.” Perry’s song, like many of her tracks, fall within the realm of calls for equality between the sexes and female empowerment. However, for me, Perry’s “Roar” is hampered by bland orchestrations and static harmonies, and instead of having an anthemic chorus like her earlier hit “Firework,” the song does little to build a listener’s interest.

However, when Bradlee got a hold of the song, he transformed it into a ‘60s R&B style track which is equal parts Motown and Aretha Franklin. He tapped into Perry’s own influences from artists like Aretha, who also sang about gender equality, and took a track that suffered from what I feel is terminal blandness, the chorus is simply louder than the verses and the tempo just moves along slowly, and infused it with much needed energy that the original lacked.

Postmodern Jukebox has only become a hit on YouTube following a break-out 2013, but Bradlee has been slowly building the group and its repertoire up for a number of years. His music is emblematic of a larger trend that has being going on in pop music for a while, as artists as diverse as Muse and Jack White have all looked to their musical pasts for inspiration. But where they wrap their postmodern proclivities within the cloth of modern pop music styles, Bradlee and Postmodern Jukebox wear their influences on their sleeves, not even trying to hide them. But it is telling of our postmodern world that a musician doing “vintage” style covers of today’s pop music can get “Internet famous” enough to sell albums on iTunes and even raise enough money to do tours of North America and Europe. It points to our musical age, one that is unique in the history of music in that we now have over one hundred years of recorded music at our fingertips. It is a remarkable era wherein Bradlee can even attempt a project such as Postmodern Jukebox, let alone have the means to make money off of it.

So what is the lesson we can take from Postmodern Jukebox? Well, first, don’t try to set up a home recording studio in your living room (see the video below). And second, never underestimate your consumers, as the music industry seems to do. As the Daily Beast article points out, the television industry has successfully pivoted from older models into what most are calling a new golden age of scripted shows, while the music industry has slowly been declining in relevance as sales of physical media decline and they increasingly rely on a younger and younger market. But those artists who have been successful, from Radiohead to Postmodern Jukebox, have turned to the Internet and left the corporations behind, pivoting on their own and leaving the industry behind.