May 19, 2014 Ralina Joseph / University of Washington Leave a comment 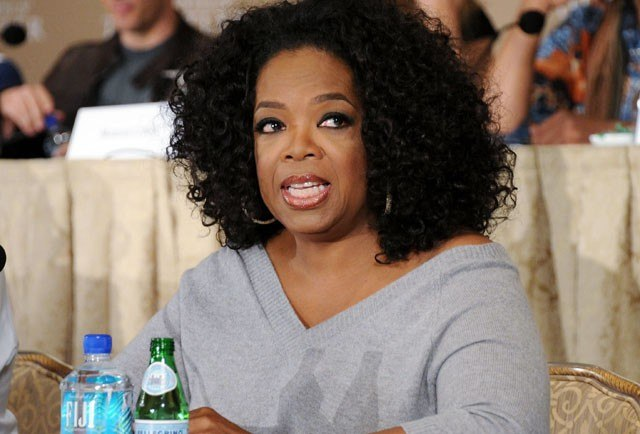 A third trope in the newspapers’ coverage of this incident centers on Winfrey’s ostensible lies and anger.  Some headlines frame Winfrey’s verbal aggression through her alleged complaints: “Oprah accuses Swiss shop of racism”1 and “Winfrey claims racism in Swiss handbag shop.”2 Other headlines ramp up the rhetoric from the language of accusation to the articulation of rage: “Shop’s assistant big mistake earns ire of Oprah,”3 and “Swiss racism upsets Oprah.”4 If Winfrey’s tweets are any way to assess anger, she tweets about meditation during this time far more than the incident itself.  These racialized and gendered descriptions are coded not for a billionaire or a media mogul’s frustration, but for a Black woman’s anger.  And not just any Black woman, but the well-worn stereotype of the Angry Black Woman (ABW). 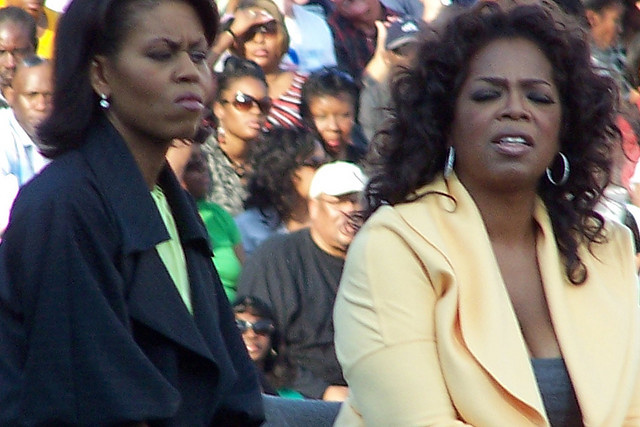 The ABW is portrayed beautifully in the image above, which accompanied an online magazine’s story on the incident.  The photograph represents an embodiment of Winfrey’s alleged accusation of racism, made manifest through a photograph.  While hundreds of images of Winfrey exist on line, this is the one that was chosen to illustrate the headline.  Both of the women’s eyes are closed.  The image is blurry and old: from Obama’s hairstyle one can date the picture to Obama’s first election campaign, but most likely before Obama’s makeover and coming out as glamour goddess in the Spring of 2008 on The View.  Perhaps most bizarrely, despite Winfrey’s being featured with Michelle Obama, the text of the article provides no mention of the First Lady.  What is clear is that the two Black women’s expressions aren’t polished, posed, or camera-ready.  Obama’s pairing with Winfrey activates old memories of the First Lady labeled as “angry.”5 Since both women have closed eyes, pursed (Obama) or agape (Winfrey) mouths, and no smile and sight, their looks juxtaposed with the text of the article’s title, “Oprah accuses Zurich shop of racist behaviour,”6 play upon a very particular stereotype: that of the Angry Black Woman.

What are the elements of the Angry Black Woman?  The controlling image of the ABW is described by Marcyliena Morgan and Dionne Bennett as the emasculating, irrational shrew who serves as convenient foil to the stereotype of the “No-Good Black Man” (she’s angry because he’s no good).  Kimberly Springer describes the angry black woman as a stock television character, the “mouthy harpy” who is a popular fixture on reality TV.7 Stereotypes, which portray a narrow, flattened, dehumanizing focus of singular, repeated, images, are dialectics activated by the portrayal of what they are not.  In the Oprah case the ABW stereotype holds weight against the foil of another ostensibly opposite group, not “the No-Good Black Man,” but the virtuous, innocent, and victimized White woman.

While Winfrey’s careful negotiation on ET remains un-recounted in the mainstream media, the shop owner’s flat, un-nuanced denial is provided in detail.  The White, Swiss salesperson becomes the subject and the clear victim in order for the ABW to signify as villain.  As the story progresses over the course of a couple of days, the papers spin the tale into the media’s righting Winfrey’s wrong by giving the salesperson victim a voice.  The Swiss woman’s claims quickly become the headlines; her statements serve to invalidate Winfrey’s ostensible narration of the events as race-based.  In this reframe, two headlines shout, “Oprah Winfrey racism claims disputed”8 and “Oprah handbag claim not true,”9 as guilty perpetrator billionaire Winfrey attacks innocent victim Swiss employee.  Others headlines resuscitate the assistant’s version as the real “truth” of the incident, writing, “Oprah’s bag-seller hits back.”10 The papers offer supposedly direct quotes from the assistant, “‘Oprah’s lying…I never said anything racist,’”11 and “‘Why is Oprah lying? I’m just a shop girl.’”12 As a result of the accusation, one headline states, “Oprah backtracks on racism allegations.” 13 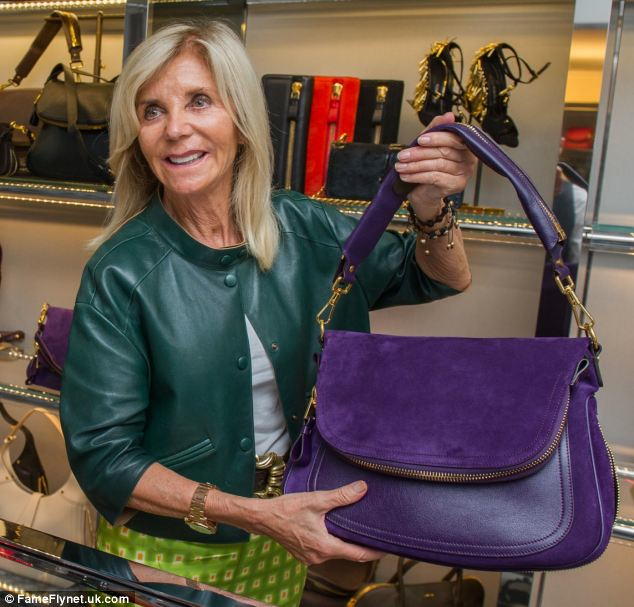 The framing of innocence

Mainstream media frames the case in accordance with not just race, but racialized gender.  While the press accounts describe the worker as a “shopgirl,” Winfrey simply describes her as “the woman working in the store”; “shopgirl” is the word that circulates in the popular press.  Winfrey is a woman; the store employee who refuses to show her the bag is a girl.  As woman Winfrey wields greater power.  The store employee is not just a “girl” but a “shopgirl”; this term frames her as put-upon, powerless, innocent, and the real victim, as opposed to rich, untouchable Winfrey.  The gendered language bolsters the racialized connotations.  The papers do not question who holds the power when a white, Swiss employee in a designer store refuses service to an unknown Black, American woman, but rather who holds the power when a rich American megastar dislikes the treatment she receives from a poor shopgirl.  Winfrey is framed as maintaining a power impenetrable to racism and sexism.  The shop assistant and owner’s denial of racism allows for media consumers to take on a similar positionality.

As I’ve shown in these columns, commonalities exist across all three tropes Winfrey was scripted into as the media spun the incident.  The papers use certain loaded and racialized words, like “racism” and “victim,” that Winfrey never uttered.  Winfrey is mocked.  There’s no understanding of context, structure, or power, much less intersectionality.  The media’s focus remains on the bizarreness of this individual incident (a superstar of Winfrey’s stature being denied anything) as opposed to a larger critique that illustrates that despite her celebrity, Winfrey’s experience is neither an aberration nor an isolated incident.  In other words, because Oprah Winfrey, the ultimate postracial and postfeminist subject, has transcended her race and gender, the papers are free to ignore how such an incident is part and parcel of a larger structural, social and historical experience that still racializes African Americans and other people of color as criminal.  The importance of the papers’ reporting is not about if Winfrey received “fair” or “unfair” treatment, but instead how this incident’s framing plays upon the new millennium tropes of post-identity in its efforts to denies very old school forms of racism and sexism.

This is the third and final part of a series on Oprah Winfrey’s so-called handbag scandal of 2013.  You can read the first part here and the second part here.

1. Oprah Gets Framed
2. Who doesn’t look angry with closed eyes?
3. The framing of innocence