The Market of the Future…and Now: Media Industries in the US and the Race to Capitalize on “Multicultural” Consumers
Madhavi Mallapragada / University of Texas at Austin

May 19, 2014 Madhavi Mallapragada / The University of Texas - Austin 2 comments

As multiplatform programming and convergent technologies become increasingly salient to the US media environment, the ideology of multiculturalism is being foregrounded in strategic ways within US media industries. While multiculturalism is a complex concept encompassing a range of issues such as individual and collective identity, state politics, civil society discourses and a vision for contemporary globalism, in the media industry, it signifies a formidable market force and unprecedented growth opportunity. In industry reports, which are focused on consumer information, audience measurement and marketing, such as the Nielsen reports, comScore reports and vdopia’s Mobile Insights, multicultural consumers are predominantly understood to be the following three groups: African Americans, Hispanics/Latinos and Asian Americans.1 While clearly the underlying marker is racial and ethnic difference, the popular industry term for racialized audiences and consumers is the more general and less politicized term, “multicultural.”

The buzz around multiculturalism in the US media industries has been quite intense since 2000, and has reached a feverish pitch since 2010. Between October and December 2013, the Nielsen company released three consumer reports: (1) “Significant, Sophisticated, and Savvy: The Profile of the Asian American Shopper;” (2) “Latina Power Shift; ” and (3) “Resilient, Receptive and Relevant: The African American Consumer.”2 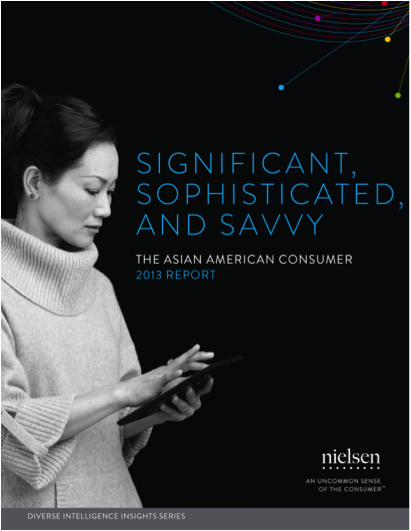 The report on the Asian American consumer, positions Asian Americans as the most desirable sub-group within the multicultural segment. The report emphasizes a few key points about Asian Americans as a market segment: one, they represent the fastest growing “multicultural segment,” two, they are the wealthiest of all racial groups, including whites; three, they are avid shoppers and four, they are tech savvy so they tend to watch media or buy products online. According to Nielson, the collective buying power of Asian Americans is likely to be in the vicinity of $ 1 trillion by 2017. The report relies heavily on two other key reports of the past few years, the 2010 Census Report which revealed that Asian Americans were the fastest growing population group in the US between 2000 and 2010, and the Pew research study from 2012 titled, “ The Rise of Asian Americans,” which highlighted that Asian Americans were premium consumers; not only did they have great wealth, they were enthusiastic spenders often opting for high end personal merchandise and lots of media and technology related products.3

Following the findings of the earlier two reports, the Nielson study further bolsters the idea that Asian Americans represent a clear and present business growth opportunity for the US market. Nielsen favors a tailored approach to this segment of the multicultural market whose, “buying behaviors and viewing patterns are different and unique from the general population.”

The report on the Latina consumer highlights that women have overtaken Latino men when it comes to spending power, online purchase and consumption of personal technology. The report on the African American consumer, reminds readers that African Americans are the leading group when it comes to television viewership and that despite obstacles such as high unemployment rates, blacks, “have shown resiliency in their ability to persevere as consumers.”4 The context in which these reports emerge is important. On the one hand data supplied by organizations such as the US Census Bureau and the Pew Research Center highlight the rapid growth and rising influence of diverse racial and ethnic groups within the US. On the other, the traditional corporate US media is facing new challenges in the form of alternative media platforms or OTT (over-the-top) content and platforms (Netflix, Hulu, Roku, for example) new and growing “ethnic” media networks, digital media distribution and transnational content providers.

In this mix of changes in consumer demographics and media environment, targeting the multicultural consumer has emerged as a key strategy. Industry news and rhetoric increasingly focus on the point that it is the multicultural contingent in the US that is most interpolated by the ongoing shifts in the production, distribution and consumption of media. Hence, the need to study them, not just in terms of numerical indexes but more importantly, in terms of their consumer behavior and cultural values and habits. As the Nielsen report points out with regards to Asian Americans, “In-language and culturally relevant media and services are key to reaching a broad segment of Asian Americans. Even those who primarily speak English outside their homes are tuning in to in-language media and consider their cultural heritage as an integral part of their identity.”5

Popular discussions about the Latino, black and Asian American consumer base have often pitched the three groups as the “new mainstream.” Or as the 13th Annual Multicultural Media for a Multicultural America Forum in 2013 proclaimed, they are the “Media’s New Generation.”6 At the event, organized by the multicultural consumer research group Horowitz Associates, the SVP of black entertainment network Centric’s Business Operations is quoted as saying, ““People that are multicultural are the mainstream. These are the people who are the general market of the future, and now.”7 To understand this emergent “general” market, panelists at the conference included executives from established networks such as HBO, BET, Verizon, Comcast, ABC, ESPN as well as newer entities that are focused on reaching the three sub-groups of the multicultural segment, Centric, ASPiRe (targeting African Americans), Mnet and Myx (for Asian Americans) and Cine Sony and nuovoTV (for Latinos). 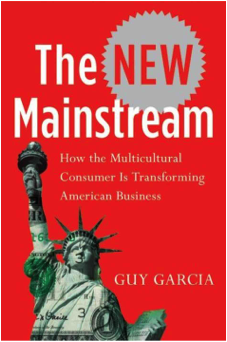 The idea—that multicultural consumers represent the new mainstream—has been put addressed in popular and scholarly accounts. In 2004, Guy Garcia’s critically acclaimed popular book, The New Mainstream: How the Multicultural Consumer is Transforming American Business chronicled the emergent changes in the marketing strategies and business plans of US companies as they recognized that the American consumer base was increasingly a multi-racial and multi-ethnic group.8 Detailing the “the growing statistical clout and buying power of Hispanics, Blacks, Asians and other so-called minorities, ” Garcia labels these groups the new mainstream.9 In their 2009 book, Ethnicity. Inc., John and Jean Comaroff argue that the commodification of ethnic difference by making such difference the very basis for a commercial enterprise, is what defines what they term, “Ethnicity Inc.”10

As the rhetoric and business strategies of US media companies move towards embracing the present “multicultural moment,” it will be significant to analyze how specific practices can speak to the idea of Ethnicity Inc. and its mutations in specific cultural contexts (for example, how it emerges in advertising for Hispanic consumers versus Asian American consumers).