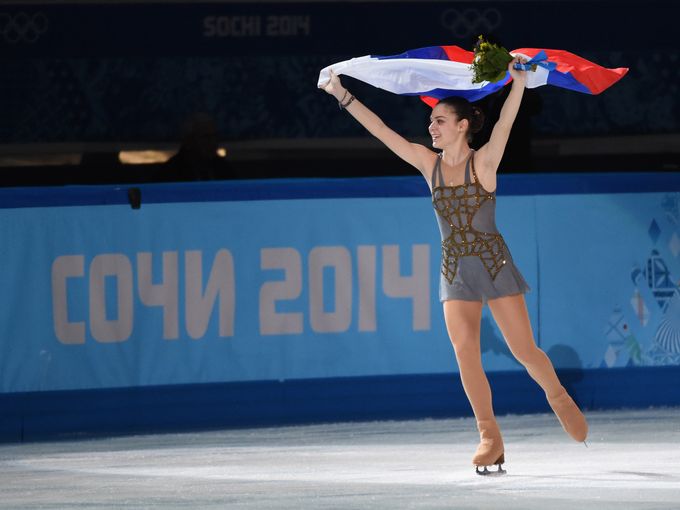 I’m an unrepentant, unapologetic figure skating fan. This fandom began during the 1988 Winter Olympics that took place in Calgary, when American television networks spent a great deal of time and energy pitting the scrappy athleticism of the U.S.’s Debi Thomas against the theatrical beauty of East Germany’s Katarina Witt. With racial overtones layered on top—Thomas is African-American while Witt is rather Aryan—the women’s figure skating competition played out a decades-long East/West rivalry in the waning days of the Cold War. Witt won and became a household name, I was crushed for Thomas but became a fan of figure skating for life, and the Iron Curtain fell just a few years later. The effect of this last event on the world of figure skating was rather profound. After decades of Soviet domination, figure skating witnessed the dismantling of the USSR’s overwhelmingly successful state-funded skating “machine.” Amidst Russia’s political upheavals and economic instability in the 1990s, former Soviet coaches relocated for more pay while their athletes suffered amidst vast decreases in governmental financing. In the time since, the Russian nation-state has battled governmental volatility and financial precarity, a scenario that precipitated the waxing and waning of its figure skaters’ fortunes on the Olympic stage even more. Yet press discourses constructed the 2014 Olympics in Sochi as Russia’s attempt to both re-assert its status as a global superpower and re-claim its title as the figure skating powerhouse.

As the Games began, news reports about state-sponsored gay violence in Russia threw a rather profound damper on what had promised to be my best television watching since the Vancouver Olympics in 2010. I thought about boycotting the Sochi Games, but the promise of sequins and feathers and jumps and spins was too much. I’m a gay man, after all. I followed with great interest as retired, openly gay figure skater Johnny Weir worked as a commentator for NBC Sports. As flamboyant as he is bitchy, Weir won raves for the articulate, intelligent commentary he provided with 1998 Olympic Figure Skating Champion Tara Lipinski. The pair posted photos of their coordinated outfits to Instagram and offered their thoughts and opinions on the Sochi competition in comical, intuitive ways. In and around the Olympic Village, Weir preened like a gay peacock, appearing here and there in pink blazers and hair accoutrements. Set against the backdrop of recent events in Russia—where the government recently banned “propaganda of non-traditional sexual relations” and queer people have been subjected to new regimes of surveillance, scrutiny, and violence—Weir’s presence might be read as a profound rejoinder to the nation’s increasingly institutionalized homophobia. Of course, Weir himself denies such activist intentions, and pointedly distances himself from criticism of Russia’s current regime. But on Facebook and Twitter, many Americans articulated how proud they were of Weir. Many people, especially gay people, felt as though he was “giving the finger” to a Russian government that has been so violent and hostile to the country’s queer publics. 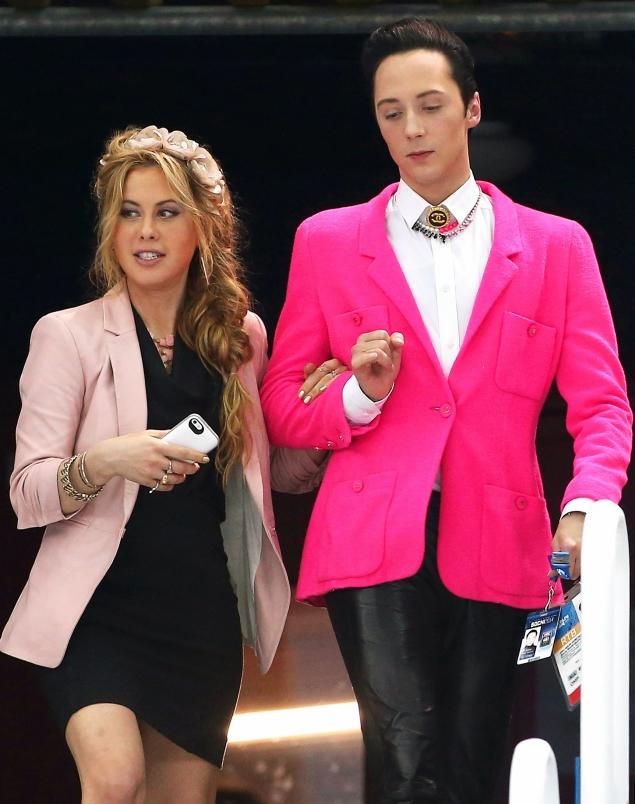 Johnny Weir at the 2014 Olympics

Such feelings about Weir’s commentary and Russia’s anti-queer climate revive longstanding American narratives about Russian politics and culture. These narratives create a binary relation between notions of American liberation and ideas about Russian repression. It’s important to emphasize here: not every American loved Weir’s performance in Sochi. Yet this mode of understanding Weir’s queerness vis-à-vis Russian sexual politics—where Americans allegedly embrace him as Russians supposedly disdain him—has been a trenchant one. This discourse generates feelings of what Jasbir Puar would call “homonationalism,” which she defines as “a historical shift marked by the entrance of (some) homosexual bodies as worthy of protection by nation-states, a constitutive and fundamental reorientation of the relationship between the state, capitalism, and sexuality.”1 Homonationalism necessitates the expulsion of other sexualities: monstrous, often foreign sexualities that get framed as being perverse against a set of sexual norms deemed as being quintessentially American. Puar calls this “U.S. Sexual Exceptionalism,” the process by which the American nation-state articulates its excellence and transcendence by way of sexual othering.2

Bound up in discourse on Russia’s human rights violations and Johnny Weir’s queer performances are many different constructions of Russian dysfunction and decline. For instance, Russian President Vladimir Putin’s sexuality is often conveyed via a “tough guy” image. The many press-friendly photo shoots staged for Russian media outlets feature Putin bare-chested while he hunts and fishes. These shots have gotten lampooned on the American internet in a series of memes, where Putin’s hypermasculinity gets recoded for its comedic, queer excess. User-generated imagery co-opts the photos to paint him as a queer-ish action-movie hero, a Cold War-era badass with a twist. But the memes also depict Putin as a macho asshole in charge of an inept government in a corrupt country. Such constructions dovetail with many other American narratives about an allegedly maladjusted Russian sexuality. For instance, American imaginings of Russian female sexuality involves a double movement of hypereroticized femininity and failed womanhood. Pornography starlets from Russia feature prominently in U.S. adult entertainment, gesturing to the ways in which American fascinations with the country frequently involve an explicit fetishization. In contrast, Americans also paint Russian women as being hideously asexual—devoid of womanly curves, dressed in outdated fashions, missing the benefits of Western dentistry. Thus, American imaginings of Russian sexualities involve both a covetous desire and a repulsed dismissal. In this way, American understandings of Russia’s queer politics and the American press’ framing of Johnny Weir’s figure skating commentary in Sochi are bound to much larger frameworks of sexualized scorn and derision. 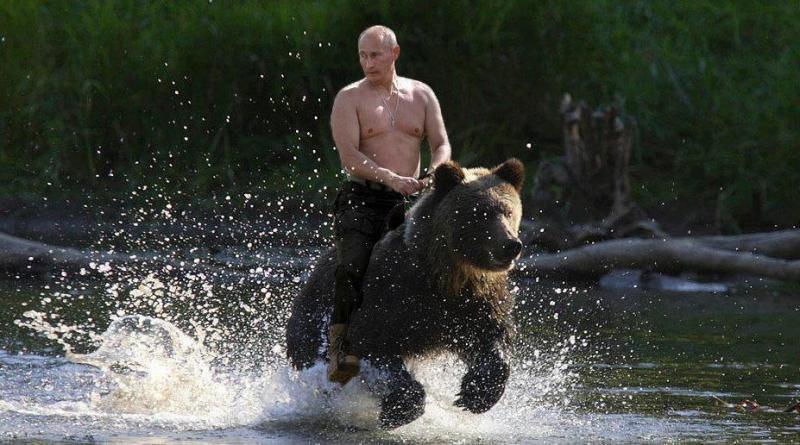 Americans also frequently picture Russia as having failed at modernity. The U.S.’s cultural imaginary has long painted Russia as being prehistoric and backward. American culture is rife with mentions and imagery of “the Russian mafia,” as well as arcane, brutal pictures and stories about Russian customs and cultural practices. During the Sochi Olympics, Twitter was abuzz with the hashtags #SochiProblems and #SochiFail. Here, non-Russian Olympic attendees shared pictures of assorted organizational gaffes and culturally-specific practices that are guilty of little more than “looking weird” to foreigners. Thus, in American culture, Russia often gets depicted as “The Land That Time Forgot.” This imagining of Russia as being both behind and in decline requires a corresponding image of the U.S. as righteous and progressive, forward-thinking and inclusive, modern and cutting-edge. Such a binary is easily dispelled when one points out how Johnny Weir’s multi-colored blazers would be grounds for anti-gay violence according to many, many Americans.

Seventeen-year-old Russian figure skater Adelina Sotnikova won the women’s figure skating championship in an upset, dethroning the 2010 winner, South Korea’s Yu-Na Kim. Following her victory, television and internet commentary featured much debate over whether or not Russian authorities had rigged the judging. I’ll freely admit that I wasn’t terribly wowed by Sotnikova, but I’m willing to concede that the esoteric scoring system used in figure skating competitions these days isn’t as television-friendly as the system used to crown Katarina Witt in 1988. Even so, I think it’s interesting how the most recent Olympics, especially the figure skating competitions, became a breeding ground for all kinds of narratives related to nationalism and sexuality. These narratives often took shape in veiled ways, though, occurring by way of a fixation with a shirtless Vladimir Putin and cellphone pictures of tandem toilets in the Sochi Olympic Village. Discourse on the Sochi Olympics was thus bound up in discourses on current Russian sexual politics, generating a whole series of ideas that relate to myths of American sexual liberation and short-sighted feelings of nationalist pride. These formulations occur via things like Johnny Weir’s fashion sense and American stereotypes about Russian mail-order brides. Such conceptualizations are not at all new, of course. In fact, they often seemed to do little more than revive old Cold War anxieties about Russian aggression and its sexual menace. That the Olympics and figure skating so often provide a stage on which these controversies play out is interesting in and of itself. The sports’ sequins and spins offer a rather poignant venue for the communication of nationalist anxieties and sexual fascinations. 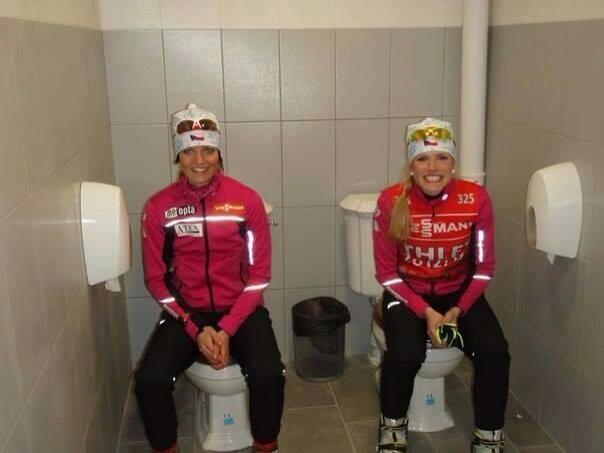 Twin Toilets: A Paradigm of the #SochiFail

1. Ladies Figure Skating at Sochi
2. Johnny Weir at the 2014 Olympics
3. Vladimir Putin Rides a Bear
4. Twin Toilets: A Paradigm of the #SochiFail