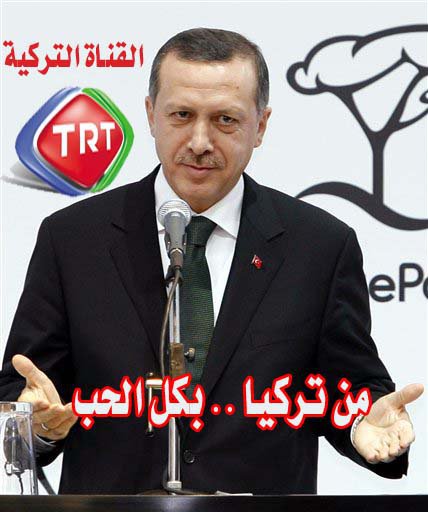 Erdoğan and Al-Turkiyya: From Turkey with all its love

“Turks and Arabs,” intoned Turkish Prime Minister Recep Tayyip Erdoğan, one spring evening in April 2010, “are like the fingers of a hand. They are as close as the flesh and the nail of a finger… We belong to the same history, the same culture and above all the same civilization.”1 Erdoğan was speaking in the launching ceremony of TRT-al-Turkiyya, Turkey’s Arabic-language satellite television channel, and his speech was carried live on al-Jazeera and other Arab news networks. The event the speech keynoted crowned a multi-year rapprochement between Turkey and its Arab neighbors expressed through Erdoğan’s soft-Islamist, socially conservative and economically liberal rhetoric and policy. However, three years into the Arab uprisings, Turkey’s initial charm offensive towards the Arab region has turned defensive, as Ankara has gotten embroiled in the war in Syria and the turmoil in Egypt. This turn of events, however, should not write-off the story of the Arab-Turkish love affair and the central role media played in it, especially when considered against the backdrop of history, as the Ottomans were the imperial overlords of most Arab societies for centuries, and secular nationalist Turks were not interested in their Arab neighbors.

Media played a major role in this Turkish foreign policy realignment in the Justice and Development Party (AKP) era, described by many analysts as “neo-Ottomanism,” for example through the launch of the Arabic-speaking TRT-al-Turkiyya. The channel signaled the membership of a politically confident and economically powerful Turkey into the select club of great powers operating Arabic-language satellite channels. It was seen as a manifestation of Turkey’s rise on par with other non-Arab major states with international Arabic-language channels like the United States, the United Kingdom, Russia, France, Germany, China and Iran.

A vibrant pan-Arab media scene has played a decisive role in constructing a sympathetic image of Turkey and its policies in Arab public discourse. That role is not restricted to pan-Arab satellite news channels like al-Jazeera and national state-controlled broadcasting systems, but extends to the massive popularity among Arab viewers of Turkish television drama series dubbed in Arabic. TRT-al-Turkiyya offers a mix of Turkish drama series, entertainment and sports shows, political and economic news and talk shows, and programs to promote tourism and education in Turkey.

The channel, which transmits on ARABSAT and NILESAT satellites, was one of many in the line-up of the Turkish Radio and Television Corporation (Türkiye Radyo ve Televizyon Kurumu), known by its acronym TRT. Founded in 1964, TRT is officially Turkey’s public broadcaster, financed by taxes on utilities and fees on television sets. The move did not come as a surprise, because first, it fits within the transnationalization of Turkish media ongoing since the late 1980s, and secondly, because having an Arabic-language satellite channel covering the Middle East has become one of the trappings of Great Power status. 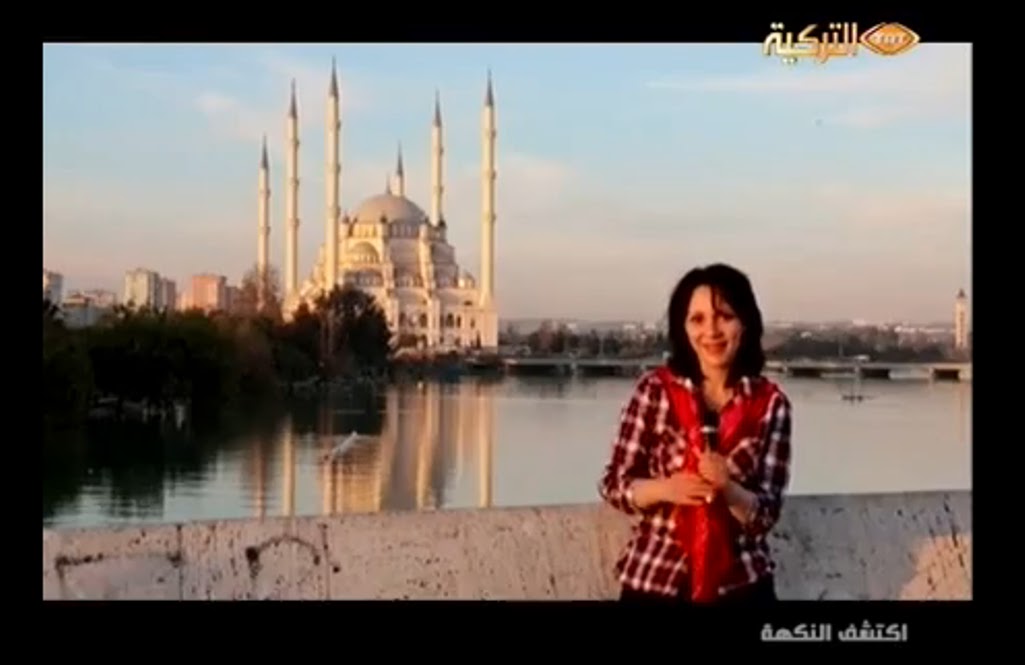 Whereas some Western and Turkish commentators have reacted with alarm towards Turkey’s perceived Eastward shift, reactions in the Arab world, particularly among Turkey’s neighbors, have been overwhelmingly positive. Arab pundits initially welcomed Turkish new foreign policy, and commented favorably on Turkey’s engagement with Arab countries. Surveys documented shifts in Arab public opinion towards increased support of Turkish policy and have noted Arab admiration of Prime Minister Erdoğan and other AKP figures. For example, in a 2011 poll, Arabs named Erdoğan the world leader they admired most.2 Nonetheless, Arab public opinion of Turkey and Arab media coverage of Turkey’s changing foreign policy in the Middle East remain under-researched and misunderstood.

Clearly, TRT-al-Turkiyya’s raison d’être was to bolster Turkey’s “zero problems with neighbors” policy with a mediated charm offensive towards the region’s 300 million Arabic speakers. However, the channel has been facing a daunting challenge: it has to compete not only with hundreds of Arab channels but also with the foreign-funded channels. The managing director of TRT-al-Turkiyya, Sefer Turan, an Egypt-educated Arabic speaker, acknowledged the challenge: “There are 750 satellite channels in Arabic,” he said. “We are going to be the 751st. Reflecting his channel’s embroilment in larger geopolitical dynamics, he added: “We want to show our country’s industry, politics, culture and art, and leave the decision to the audience.”3 Turan’s words reflect the style and tenor of Turkey’s public diplomacy: it promotes the country and its regional interests in a soft sell stylistically emblematic of Neo-Ottoman Cool.4

Arab media discourse about the launch of TRT-al-Turkiyya mirrored Arab media coverage of Turkey’s foreign policy: It received a warm welcome from Arab news media, but also caution towards Turkey’s seemingly growing clout.5 Al-Jazeera gave extensive positive coverage to the launch of the channel in a dedicated episode of Hiwar Maftuh [Open Dialogue] that was shot in TRT-al-Turkiyya’s studios in Istanbul. The Qatari channel also aired a special program dedicated to the launch, which was hosted by Al-Jazeera’s erstwhile Beirut Bureau Chief Ghassan Bin Jeddu. He commented on the launch video that TRT prepared, in which a young Turkish man is seen traveling from one Arab city to the other, always holding a tray of Turkish coffee. The symbolic resonance of Turkish coffee represented the authenticity and naturalness of the Arab-Turkish relation. As Bin Jeddu said that evening:

At the other end of the spectrum, the London-based, Saudi-funded daily newspaper al-Hayat was critical of TRT-al-Turkiyya and wary of encouraging Turkish involvement in the region. It criticized the channel’s editorial line which “heavy-handedly forced praise of Turkey onto the content of programs.” It described the channel’s political talk shows as contests on which Arab pundits “can shower more praise on Turkey and its foreign policy and influential regional role.”6 Other news outlets speculated on whether the channel reflected a neo-Ottoman policy, and quoted heavily from Turkish sources evincing that Ankara’s soft power went hand-in-hand with its geopolitical aspirations. 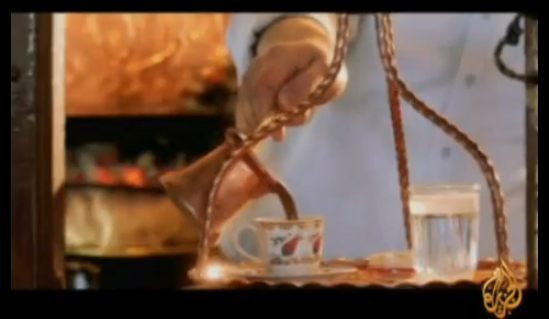 An Arabic-language Turkish channel will never be able to compete head-to-head with the best indigenous Arab media productions across the spectrum of media genres (news, talk-shows, entertainment shows). Rather, the importance of TRT-al-Turkiyya resides primarily in helping establish Turkey as a country with the cultural and media trappings of a Great Power. The channel also signals to Arabs that Turkey is interested in and committed to courting them. In this context, it is logical that TRT-al-Turkiyya emphasizes soft news and entertainment at the expense of hard news, with the former associated with attracting viewers to Turkish cultural, social and political life, while promoting Turkey’s political and economic interests. That Arabs welcomed Turkish soft power, in sharp contrast with the derision meted upon Western attempts to win Arab hearts and minds, testify to the power of a strategy that underscores soft-sell influence that takes advantage of popular culture and invests in media broadcasting.

The regional political situation has undergone a radical transformation in the 3 years since the launch of TRT-al-Turkiyya. In hindsight, Turkish Prime Minister Recep Tayyip Erdoğan April 4, 2010 “fingers of one hand” speech can be understood as the apex of Turkish unchallenged popularity in the Arab world. Since then, the onset of the uprisings that unseated dictators in Egypt, Libya, Tunisia, and Yemen, and the ongoing violence in Syria and instability in Bahrain, in addition to continuing upheaval in Egypt, have spectacularly upended Turkey’s “zero problems with neighbors” foreign policy, and challenged Turkey’s position in the Arab world. This affects TRT-al-Turkiyya directly because it is closely associated with the Turkish leadership. It is therefore fair to assume that perceptions of the Turkish channel among Arabs closely reflect the standing of Turkish leaders in Arab public opinion.

Turkish embroilment in the Arab uprisings and the ensuing chaos gradually went from bad to worse. The country’s involvement in the Libyan crisis was not too costly because that affair ended quickly. Turkish entanglement in Syria, however, caused a deterioration of the security situation within Turkey, with thousands of refugees crossing into the country, explosions rocking border cities, and instability emerging along Turkey’s border with Syria. Nonetheless, one can say that at least in the case of Syria, Turkey’s stance is in sync with majority Sunni Arab public opinion. With the June 30, 2013 coup in Egypt that removed elected president Mohammed Mursi and launched a campaign of repression against the Muslim Brotherhood, which is close to Turkey, Egypt fell squarely in the Saudi camp, against Qatar and Turkey. In the ongoing Saudi-led media campaigns against the Muslim Brotherhood and their defenders, including Turkey, a diminished TRT-al-Turkiyya is not sufficient to promote and defend Turkey’s perspective in an Arab communication order increasingly dominated by the Saudis and their allies.

1. Erdoğan and Al-Turkiyya: From Turkey with all its love
2. Shaima Sharif – The Turkish Channel
3. Still from TRT launch video that fuses Turkish coffee with Arab identity