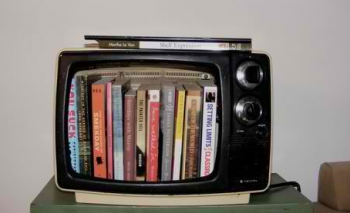 With some possible exceptions the future of television will be essentially the same as its past. This is likely the case despite feverish, widespread, anguished and at times comically speculative commentary on the topic. The bulk of my reading about television now comes from professional, trade press magazines and newsletters where for several years, several times a year, articles and theme issues have focused on “the future of television.” Many of these publications are affiliated with organizations that now create substantial revenue by hosting conferences and meetings and many of these events have also treated similar topics. In short, concern about the “future of television” is a moneymaker these days.

Despite all the expressions of great concern and even dire predictions, the future of TV will primarily involve strategies of adjustment to and adaptations of possible innovation and change. Large scale industries, perhaps especially culture industries, change very slowly. They change by degree, rarely by cataclysm. While newer technologies did, in fact, alter the music industries in some fundamental, perhaps cataclysmic ways, there is little indication that the core features of television will be affected to the same degree (not insignificantly because of some, not all, lessons learned).

Of course “Television” defined under a “broadcast” model, a system reaching a mass audience has long been gone. But I define television in terms of what, from its beginnings, it has offered – to individuals, groups, communities, societies, cultures. From this perspective television has exhibited a rather amazing, if in some ways narrow, stability. Under this definition “television” offers audio-visual information, entertainment and persuasive material that can be created, experienced and used in many ways.

Developments among these offerings can be traced and studied by critics and scholars. They most certainly are traced and studied by industry practitioners. And they are traced, perhaps studied, by television users. For the purposes of others these “users” may be defined in terms as varied as viewers, audiences, receivers, dupes, couch potatoes, fans, etc. Regardless of labels, television users are quite adept at getting what they want from what is offered, which is not, as often noted, the same as getting what they might want if the offerings were different. In the long view, however, the familiar patterns among television offerings are considerably stronger than the novelty constructed upon them. Rarely does television offer anything that is incomprehensible or even unfamiliar to users, practitioners or scholars.

The current frenzy of concern expressed in the trade press, the conferences, and the academic discussions of television futures seems driven by technological developments. This, too, is familiar. From the arrival of basic, broadcast television, then on to color, cable, recording devices, screen size changes, and so on, technologies have repeatedly been central to discussions in many arenas. Here again the most familiar patterns emerge.

The same or similar organizations struggle to control, adapt or maintain versions of industrial power (profit margin, audience share, advertising or government funding, etc.). The trade press reports on who is buying whom, which stock is rising or falling, which conglomerate is expanding or contracting, which executives are moving where. But even as they change, expand or contract, even as “new” groups come on the scene, the corporate bodies structure the industries. True enough, there’s lots more material available from “produsers” (YouTube) and from entrepreneurial experimentation by new providers (Netflix, Amazon, Yahoo). Compared with what most television users choose for primary television experience, however, the efforts remain quite small and quite recognizable. Even in this setting the goal of “produsers” is often to be purchased by “mainstream” entities and those entities are constantly searching for the potential offering to be “developed.”

Similarly, the mainstream site of production, the creative community, continues to be managed, for the most part, from Los Angeles and New York even when production has “run away.” While I have never believed that ownership, the corporate entities noted above, has much to do with the creative process properly understood, it must be recognized that the creators of television work within remarkably stable patterns. Through all its “futures” television has been content to depend on “scheduling” patterns taken from radio. Combined with the reliance on familiar generic forms and occasional generic modifications these structuring devices have shaped an enormous, amazingly familiar, yet frequently astonishing body of creative work through the years.

The aspect of television that has seemed to change most, that has driven discussion of television futures in the corporate, creative, policy and academic communities is, of course, distribution, the feature most affected by technological development. Changes in distribution options drive the corporate battles for control. They have opened, perhaps increased, options for creatives. At present, both groups must be primarily concerned with financial support systems; advertising and retransmission consent in commercial models, government support in public service or modified systems. So far the new distribution patterns have modified, but hardly undermined advertising support for production and distribution, though they may have posed a greater financial challenge in public service systems. Advertisers have moved easily into even the most “populist” expressions of television, or video as it is known on Facebook and YouTube. A move to an a la carte system of television offerings would be a major factor, but this major policy change – and changes in most other policies related to television – seems highly unlikely. Yet even if the most sinister predictions come to pass, even if the industries change in major ways – still more channels, more internet video and more personal video exchanged via social media – the offerings, no matter how varied in form, format, content or ideology will continue to be recognized as information, entertainment and persuasion.

At this point I could argue that there will be some changes in the future among television users because of increased fragmentation and segmentation. Such changes would potentially have deep cultural consequences. But in my estimation this future is already with us. For some time I have been concerned with the loss, or the dilution of the central story telling system offered by systems of mass communication. I remain convinced that great social upheavals such as the Civil Rights Movement were deeply dependent on a narrower range of television offerings in both information and entertainment. I believe that such a loss may be a contributing, though perhaps not a primary, factor in the widespread sense of what seems now to be a fragmented and contentious social formation. But even in the more fragmented system of the last thirty years we have seen the movement for Gay Rights encouraged and perhaps enabled to some degree by television.

From this perspective it is perhaps best to say that the future of television will be the same as its past, but with more varied offerings directed or catering to more specific forms of taste, politics, social group or “ideology.” Yet in this way television simply continues its role among other cultural practices. I return, then, to one of my touchstones, quoted repeatedly in introductions to Television: The Critical View, to Moses Hadas’s admonition to critics. “[A]ll who take education seriously in its larger sense – and not the professed critics alone – should talk and write about television as they do about books.” This quotation was first meant as a validation of serious study of the medium. I now see an additional application.

More than ever, television is now like books. It has a larger number of narrower offerings. And for most users television, like books, is just “there,” around the house, on the shelf, now even carried in a bag or shirt pocket. It will be used for a few hours to enjoy some entertainment, gather some information and deal with the persuasive onslaught of advertising or someone’s definition of how the public should be served. Some users will be moved, some offended, some enlightened, some made stupid. For most users television will be hated, loved and enjoyed, but in any larger scheme of lived experience it won’t matter very much. Critics and scholars will consider television differently, as Hadas admonished. There’s much to study and say, as has always been the case with books. But critics and scholars don’t matter a great deal to most television users either, just as they’ve not mattered much to readers. Like books, television, in some form or other will simply keep doing what it’s done before, including contributing to slow, lumbering socio-cultural shifts.