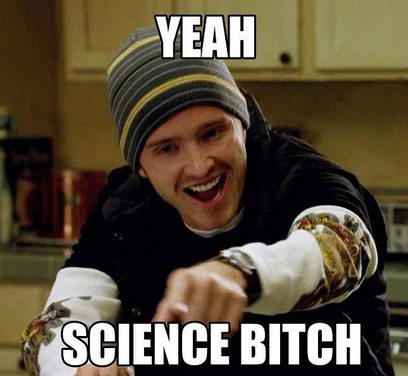 Science is a Central Driving Force in Breaking Bad

Science is no doubt a central driving force in the recently ended AMC hit series Breaking Bad. A high-school chemistry teacher turned meth cook, Walter White’s scientific knowledge serves as the foundation for his transformation from a cancer victim on the verge of bankruptcy to a ruthless anti-hero intent to build a corporate empire from the ground up. His ability to manipulate the inner workings of chemistry and mechanics has materialized in explosive turning points for him and his partners alike, whether it is the fulminated mercury in Season One or the automated machine gun in the finale. Given the series’ ostensible attention to contemporary issues (from health care costs to a depressed economy), it is perhaps no coincidence that science is singled out as the most powerful “weapon” for White to combat a gruesome social reality. While this “return” to science is easily read as a symptom of America’s attempt to cope with its perceived “decline” when faced with the challenges of the 21st century, the series also presents an ambivalent attitude toward intellectual property (IP) – that is, the institutional link between science and a post-Fordist mode of capital accumulation.

This ambivalence – regarding the role of IP in securing America’s hegemonic position in the global economy – is most explicitly played out between White and his Beavis-and-Butthead-esque former student, Jesse Pinkman. Addressed as “Mr. White” by Jesse throughout the series, Walter’s “Whiteness” has hardly missed the eyes of the critics. Whether a frail inversion of “white masculinity” or a re-insertion of white domination over other ethnicities (represented by figures like Tuco Salamanca and Gustavo Fring) (Read)1 , the name importantly also constitutes half of the “gray” in Gray Matter Technologies, the billion-dollar company whose original source of profit consisted of a patent still pending when White abandoned his share for $5000 (Buyout, the 52nd episode).

White’s imperial vision in part stems from his desire to come to terms with this “missed” fortune with his former partner Elliot Schwartz, whose last name means “black” in German. The “grayness” of the “matter,” then, becomes metonymic of the fact that IP is the ultimate knowledge-capital for both Mr. “Black” and Mr. White. “For us, it’s always been science first,” says Schwartz in his Charlie Rose interview (Granite State, the 61st episode), before denying White of any substantial contribution to the company beyond its name. Schwartz’s self-distancing from the former-collaborator-turned “drug kingpin” indeed brings closer attention to the shared mode of value accumulation between the two enterprises, one legal and the other illicit. The operation of White’s business has been explicitly compared to Coca-Cola (as a defense of his signature product against his competitors in Say My Name, the 53rd episode) and implicitly juxtaposed with the tax-evading Beneke Fabricators Incorporated (Mandala, the 18th episode). It is commonality rather than difference that links White’s underground empire to its legit corporate counterparts.

Pinkman, on the other hand, is given the color code of “pink” despite his “normalcy” as a white male.2 As the series develops, his name becomes increasingly suggestive of an amalgam of “people of color” – the populations imagined to constitute the Third World whose encounters with the West – or more specifically, Western science as championed by Mr. White – are marked by breakdowns and failures as much as copying and appropriation. The bathtub accident in the second episode and the RV’s battery problem in the 16th are two of the most memorable examples that bespeak Pinkman’s propensity to screw things up, thanks precisely to his lack in scientific knowledge and disciplining.3 Through a process akin to technological transfer from the First to the Third World, Pinkman is able to eventually “catch up” with Mr. White. But this attempt at emulation only triggers a consistent anxiety in Mr. White over the ownership and control over the exclusivity of the brand – much like the IP rights holders of the Global North who constantly fuss over the developing world’s tendency to “steal” their intangible assets.

During one of their early “breakups,” when Pinkman managed to produce a batch of Blue Sky meth all on his own, White accuses him of making an “inferior” knock-off (Green Light, the 24th episode). White’s outrage at this “shoddy” theft of his designer formula is more than reminiscent of global brand owners’ continuous efforts in clamping down on IP infringements in the Global South. Throughout the series, Pinkman’s “progress” manifests itself in the adoption of scientific principles – resulting in the enhanced purity level of his product – as well as the improvement in logic and rationality. At the same time, his almost effeminized bent on compassion remains contrasted with White’s more or less linear and self-interested decision making.

Pinkman’s sentiments and actions are sometimes even generative of signifiers that constellate into a “pinko-commie” (another pink!) tendency to disrupt the IP regime. In the episode I See You (the 28th), when left idle in the lab, Pinkman even turns the Fordist factory into a space of play, in a manner reminiscent of Charlie Chaplin’s carnivalesque moment of anti-capitalism in Modern Times. This “socialist” unconscious comes through even more in Blood Money (the 55th episode), when Pinkman throws chunks of cash at random onto the lawns of a decrepit neighborhood, as if to redeem his sense of guilt. In these scenes, we also observe the visible presence of the “Third World” in the “First World” – de-industrialized urban landscape (thanks to outsourced manufacturing jobs), massive unemployment-induced poverty (as seen in many homes of the “users”), “illegal” immigrants (employed in a variety of Gus’s franchises), among others.

This is perhaps why China – a symbol of the “rise of the rest” (vis-à-vis America’s “decline”) and a nation known for its manufacturing as much as “faking” capacity – has also made its way into Breaking Bad. Recall the Chinese character for “bee” (蜂), which assumes a constant presence as a trademark for the phenylacetic acid that Jesse, when pressed to cook in Mexico for the cartel (Salud, the 43rd episode), insists to be an essential ingredient for making White’s brand-name product. China also surfaces when the post-Fring trio adopts Pinkman’s idea to steal methylamine from a freight train transporting the chemical produced in Guangzhou. White, in response to Todd Alquist’s concern about the dilution of the content, assures him that it is China that will be blamed “for sending a marginally weaker batch” (Dead Freight, the 51st episode).4

China’s reputation as a counterfeiting nation, then, is combined with its low-cost labor force and raw material to shore up the purity of the “Blue Sky” brand – an operation not unlike the global brands’ sub-contracting of supply chains to China. The fact that these manufacturing facilities often create the possibility for counterfeiting practices is seldom acknowledged when China is invoked as a dominant “pirate” figure within the IP discourse (Philip)5 . Directly mirroring these post-Fordist conditions is the regime of Lydia Rodarte-Quayle, the “new boss” after Tuco and Gus, for whom the ownership over production becomes less important than the control over the brand. As long as the purity of the (branded) product is maintained and the demand of a global market is met, she can just close her eyes to the violence inflicted in replacing one set of workers with another (Read). 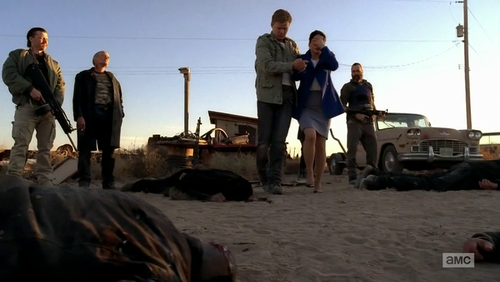 At the series’ last moments, we find Pinkman in chains – an image almost too hard to dissociate from the familiar news feeds of “sweatshop labor” in China or other parts of the Third World. 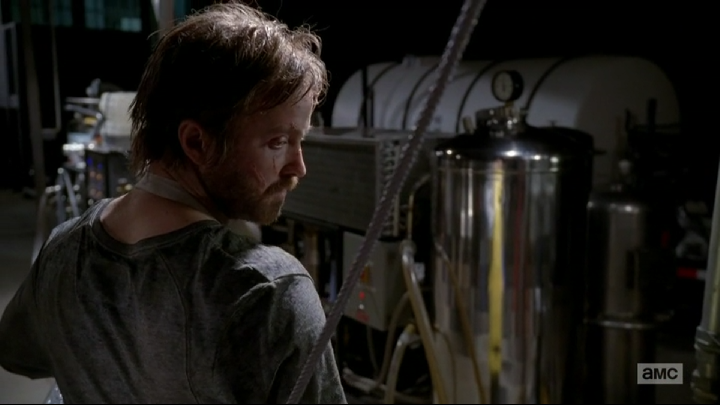 But it is ultimately Pinkman, the “Third-World” subject, who is set free from the neo-Nazi shackles (Felina, the 62nd episode) that reduced him to “bare life” (Read). As Pinkman breaks through the gates of the white supremacist compound, the utopian impulse of the moment is perhaps more usefully taken as an invitation to further demystify IP’s global operation than a narrative closure that affirms science as the ultimate sign of modern “progress.”