November 18, 2013 Michael Newman / University of Wisconsin at Milwaukee One comment

A screenshot from Atari’s Breakout

“When Television Marries Computer” was the headline of a 1983 New York Times review of Pilgrim in the Microworld, a book about David Sudnow’s experience playing the Atari game Breakout. The review concludes that the marriage is “to go the way of the hula hoop, Rubik’s Cube and the pinball machine,” but there can be no question decades later that the couple is still happy together, and not only in the form of video games. YouTube, Netflix, DVRs, and dozens of other technologies and services combine television and computer. And despite the implied novelty, the TV set and computer were hardly newlyweds in 1983. It was not uncommon in the 1960s and 70s to read of a near future of televisions hooked into computer networks that would transform them into electronic newspapers and libraries, nodes for connecting to the whole world’s information. By 1983, many televisions in several countries were connected to videotex services that delivered news and other information via computer and could be used for two-way communication. Raster-scanning CRT video displays, basically television sets minus the broadcasting receiver, were often employed as computer terminal output in the 1960s and 70s. And video games and computers plugged into televisions in the home had been commonplace objects for several years by 1983.

The 1970s was a particularly fecund period for the marriage of television and computer. The emerging culture of home or personal computing, which was inseparable from the development of video games, saw the television set as a crucial component of its ensemble of technologies. We might not realize today what a big deal it was when people then were able, for instance, to type letters and see them at once appear on a television screen. More exciting yet was a computer that would be under the real-time, interactive control of its individual user. Computers over the years had many input/output devices, from punch cards and blinking lights to teletype and light pens. But during the 70s, the standard components of the personal computer using a silicon microchip came to be a QWERTY keyboard and a CRT display — often actually a television set.

The cover of Radio Electronics from September 1973

A device predating the consumer market home computers like the Apple II and Commodore PET was the TV Typewriter, which could be assembled to display text on a CRT screen and could be used as the input/output for a microcomputer built from a kit. The TV Typewriter was called “the opening shot of the computer revolution,” and it helped establish the CRT as the standard output of PCs, in contrast to the teletype used with the minicomputer.1 Video games, which take their name from the televisual apparatus, were often the most frequent use of microcomputers before they became integrated into the standard array of workplace tools.

Inscribed in such devices was a utopian ideal of appropriating the computer, long seen as an instrument of institutional control and depersonalization, as a toy for creative individuals to play with in their own personal ways.2 But these objects also express the fantasy of transforming the television set, long identified with network broadcasting and commercial mass media, and remaking it as a participatory rather than one-way technology. The reputation of television as a cause of serious, widespread social problems, at best a fancy time-killing machine, made for idealistic rhetoric about the potential of new technology — from cable and videotape to games and computers networks — to redeem TV from its debased status. Popular rhetoric of the time mobilized citizens to talk back to TV, agitated for public access to the airwaves, and called on the networks to make television function more in the interests of participatory democracy.

Innovators of the 1970s whom we might credit with standing alongside television and computer at their wedding (or at least with fixing them up), often imagined the union in terms of TV marrying up. Video games’ inventors, including Ralph Baer and Nolan Bushnell, described their motivation as providing something to do with a TV set other than watch network programs.3 Steve Wozniak narrates in his autobiography how excited he was by Pong, which was interesting not so much as a game but as a way of manipulating an image on a TV screen, a key appeal of the Apple computers Wozniak subsequently created.4

Representations of personal computers in the popular press might contrast them with television in terms of value and legitimacy, as in an Esquire story about computer hobbyists from 1977 playing the game Star Trek on their workshop-assembled computers. The best thing to be said for Star Trek was that it was “not quite so moronic as the television series from which it borrows its name.”5 An early 80s ad for the Commodore 64 presented the computer as something “on television tonight,” presenting its variety of programs organized into half-hour time-slots as in television listings. Computers offered programming preferable to whatever was available over the air. 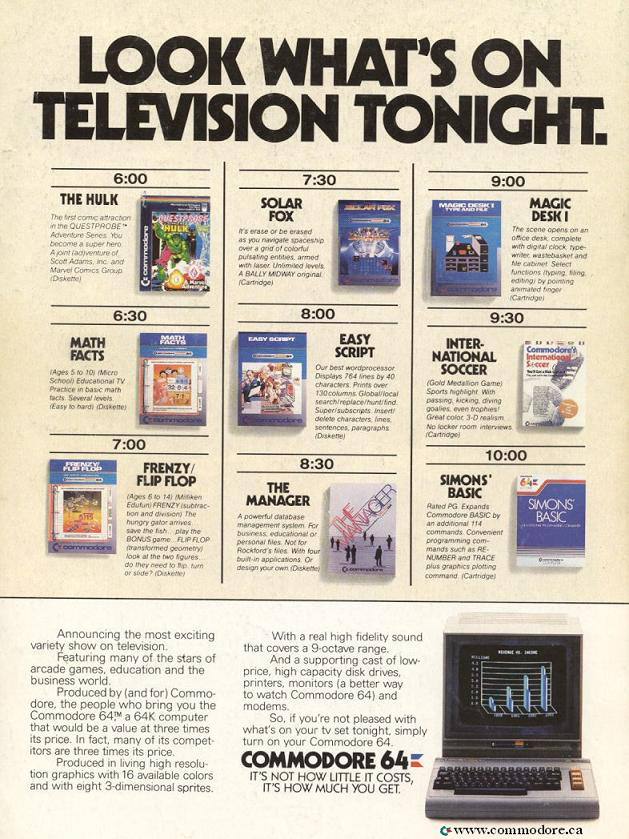 The fact that a television screen was an essential component of the new artefact called a home computer made for inevitable comparisons between rival uses of the hardware. One of the most poetic and prophetic voices of home computer culture was Ted Nelson, and while he is most often noted today for originating the term hypertext, much of his 1974 book Computer Lib/Dream Machines was devoted to the utopian, liberating possibilities of the CRT as a graphical display for computers.6 Dream Machines prophesies future applications of computers with screens as playthings and tools of communication, “to help people write, think and show.” (2) 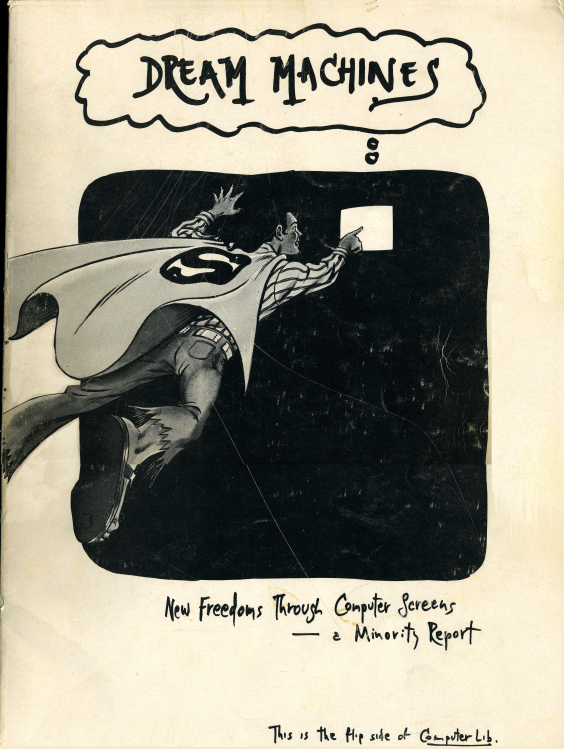 One of the covers of Dream Machines

The cover pictures a Superman in sandals floating toward a white-hot screen, entering a paradise of interactive communication through images. Nelson was no fan of TV, arguing that it had hardly progressed since the 50s and that “the bulk of television is about as bad as it ever was.” But he was exhilarated by the prospect of using CRT screens, “lightning in a bottle,” (6) in interactive computing allowing users to make pictures imaginatively and change them through their input. “IF COMPUTERS ARE THE WAVE OF THE FUTURE,” he proclaims in caps lock, DISPLAYS ARE THE SURFBOARDS.” (22) Nelson’s vision of hypertext was not strictly verbal, combining multiple media for diversion and information. It was to be the combination of

a book, a TV show and a penny arcade…a vast tapestry of information, all in plain English (spiced with a few magic tricks on the screen), which the reader may attack and play for the things he wants, branching and jumping on the screen, using simple controls as if he were driving a car…A person is writing to other people, just as before, but on magical paper he can cut up and tie in knots and fly around on. (58)

This techno-utopian vision was to turn television into computerized play substituting a creative individual’s explorations for commercial programming and transmission. Television’s electronic scanning imagery, by the terms of this imagining, becomes magical and transformative, a far cry from the mass media fare of the networks.

As with many futuristic fantasies, there is a mixture in Dream Machines of outlandish absurdity and profound vision. Today’s computer screens do much of what Nelson imagined four decades ago even if they rarely seem like magical paper to fly around on. But what I find particularly salient in the historical continuities of TV-computer convergence thinking is the status of network-era US television broadcasting as the enduring bad object, the institution in woeful need of technological fixing up. Today we valorize our contemporary interventions into television at the expense of the past, reproducing ideological assumptions about mass media that have changed little in more than half a century.

In a recent technology-themed issue, The Atlantic published a list of its “50 Greatest Breakthroughs Since the Wheel.” While the internet comes in at number 9 and radio at 29, TV is only 45th greatest. The magazine’s explanation for the low score speaks to historical continuity in convergence rhetoric when it comes to television:

Many years from now, perhaps people will regard the second half of the 20th century as the brief moment when broadcast TV could seem a dominant technology. With its obvious-in-retrospect limitations, like one-way information flow rather than interactivity, and dependence on heavy hardware for best display, maybe TV was bound to be a transition to some other system more tailored to individual tastes. Or maybe our panelists were embarrassed to vote for it.

The presentism here is familiar to the point of cliché from discourses of television’s cultural legitimation, in which interactive technologies appear to give users newfound agency and thereby improve TV’s status. The limitations perceived in The Atlantic were widely felt in years past, as I have tried to illustrate. These limitations have often figured into the logic behind television’s marriage with computers. Sometimes the things we think are definitively of our own age turn out actually, upon historical inquiry, to be recurring nightmares or fantasies.