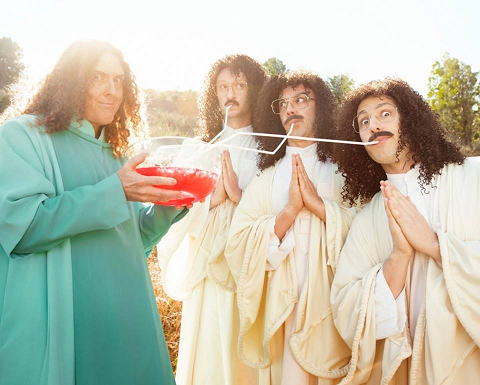 Perhaps one of the stranger online phenomena to recently enter the mainstream is that of self-dubbed ‘fake rappers.’1 Beginning, curiously, quickly after the emerging financial crisis, YouTube became dominated by the likes of The Lonely Island, Bo Burnham, and Jon Lajoie, white male musicians who blur the line between parody and appropriation in comedic performances of the rap genre. Worryingly, it is not the musical form alone that is recycled but, the same tenor of misogyny and homophobia often present within ‘authentic’ examples of the genre. These musicians-cum-comics present ‘ironic’ or satirical performances of hyper-masculinity, often complete with the misogyny that is so central to that identity, leaving one to wonder if the more subtle aspects of this ideological exercise are lost on their massive online followings. At latest count, the videos of the three aforementioned artists alone have garnered over 1.8 billion views, registering the problematic genre of ‘ironic’ rap as an online staple.

Jon Lajoie’s “Show Me Your Genitals”

Considering that there is no shortage of comedic media on YouTube, one might ask why the discourse of the ‘fake’ white rapper has been so uniquely resonant. While one cannot account for individual comedic taste or question the quality of a great deal of these convergent stars’ media (the example above notwithstanding), one might posit that there are numerous similarities in theme shared by these artists, that we might identify as a common denominator explicating their sizeable cultural appeal. While the ‘fake’ white rapper is nothing new (‘Weird Al’ Yankovic long pre-empted both the genre, and even the ‘rap through geek culture optics’ theme in his ‘White and Nerdy’ parody of Chamillionaire’s ‘Ridin’ Dirty) it is a cultural anomaly with a definite allure to a significant online audience, trading in themes that speak to the fictional concept of recessionary social ‘loss’ on behalf of the white male.2

‘Fake’ rap is, if not a genre, a mode of comedy video in which (almost inevitably) a white male raps, usually about his lifestyle, purposefully contrasting the performer’s mundane, de-sexualised, middle class, or stereotypically ‘white’ behaviour against the hyperbolically sexual and commercialised performances of masculinity by ‘traditional’ hip-hop stars. Often, the white male comic actor is accompanied by a non-white, serious hip-hop artist, as if to legitimise the exercise in parody. The Lonely Island (namely Andy Samberg, Jorma Taccone and Akiva Schaffer, who together hold the notable distinction of having the 30th most subscribed-to channel on YouTube) produced numerous ‘Digital Shorts’ for Saturday Night Live, and as David Gurney noted, their work marks a significant moment of media convergence in the continued viral evolution of the sketch comedy format.3 While their videos are (for the most part) textually unrelated to each other, we might consider the collective whole as a comprehensive thematic deconstruction of the implied values of the rap genre, in a mode that occasionally transitions into the racially problematic. ‘I’m On A Boat’, for instance, released in June 2009, presents a timely recessionary critique of (perceived) frivolous consumerism on behalf of the racially demarcated hip-hop community. Other opuses such as ‘I Just Had Sex’, ‘Jizz In My Pants’, and ‘Dick in a Box’, parody the overt sexualisation of rap artists, contrasted against the Lonely Island’s own somewhat emasculated white image and slight physiques.

While the majority of the Lonely Island’s videos explore the theme of a perceived ‘loss’ of white male agency, they (largely) stray away from explicit racial discourse – rare exceptions such as ‘Ras Trent’, a reggae song about a white college student turned ‘inauthentic’ Rastafarian notwithstanding. However, that is not to say there is no racial subtext to their discourse. The trilogy of videos co-starring Justin Timberlake, parodying 1990s white hip-hop artists, ‘Dick In a Box’, ‘Motherlover’, and ‘3-way (The Golden Rule)’, all self-consciously represent hyperbolically sexualised white masculinity, as if nostalgic for a pre-recessionary period where white male primacy, be it sexual, cultural or economic, was unchallenged.

Alternatively, the ‘JUST 2 GUYZ’ series, featuring the eponymous song, ‘We’ll Kill U’, ‘We Like Sportz’, and the recent ‘We Need Love’, all play to the notion of young white males’ sincere attempts at writing their own self-aggrandising rap songs, complete with stilted delivery and homemade aesthetics. The purposeful contrast of the content (“Just two Don Juans looking for amour / it could be you, if you’re not a whore … I wear condoms too but when they break it’s bad, I’ll take you to the clinic, I can’t be no dad”), against the childish personae of group members Akiva Schaffer and Jorma Taccone, seems to serve to accentuate the perceived loss of agency, sexual self-determination, and cultural cache of white males during the recessionary period. Their discourse addressing white male loss manifests itself through not only ruminations on the loss of economic primacy, but also the deeply held post-feminist belief that women are uniquely sexually and financially self-determinant in modern society; a notion only furthered by widespread coverage of the supposed ‘man-cession’, reported upon by the likes of the New York Times4 and Newsweek,5 and unapologetically pandered to by nostalgic masculine texts of the likes of Mad Men or Pan-Am.

While these videos represent the white male as sexually abject and culturally irrelevant, other videos provide a self-reflexive representation of hyperbolic white masculinity, appropriating the language, style, and supposed ideals of a genre in which white participants’ authenticity has traditionally been questioned. Ethan Thompson eloquently asserts that an early video, ‘Stork Patrol’, “is a hip-hop parody, not in the sense that it makes fun of hip-hop, but because it uses hip-hop as a mode of comic address, deriving humour from the incongruity between the sexual desire so earnestly “rapped” and the object of that desire,” which happens, in this case, to be a large stork puppet.6 However, it might be argued that the Lonely Island’s work has evolved since the dawn of the recessionary period, co-opting the hip-hop genre’s performances of hyper-masculinity to portray white male disillusionment in the wake of economic collapse.

While the recessionary coding of the Lonely Island’s earlier videos was somewhat covert, with the release of their new collection, ‘The Wack Album’, on June 7th, 2013, subtext rapidly became text. While still appealing to the now ubiquitous ‘geek’ subculture through reflections on white male sexual frustration and loss of agency (for example, ‘Hugs’, featuring rapper Pharrell Williams, replaces sexual self-aggrandisement with boasts about the artist’s proficiency at hugging through the optics of ‘nerddom’: “This hug world is just a big Game of Thrones”), dissatisfaction with post-feminist sexual politics has largely taken a back seat to recessionary, suburban angst. ‘Diaper Money’, for instance, parodies the rap genre’s economic and sexual self-aggrandisement with the group’s members priding themselves on saving money to be responsible parents (“I got that diaper money ‘cos my kids need to shit/ So I stay on my hustle to keep my pocketbook thick”).

‘Spell It Out,’ another song from the Lonely Island’s new album, further navigates the new cultural space of the dispossessed male, again contrasted against the masculine grandstanding of the genre. The song serves as an introduction to the group (“Yo, it’s the Lonely Island, we got my man Jorm, Kiv’s in the house, and me, you know who the ‘F’ I am, and if not, let me spell it out.”), before launching into a rather grotesque letter-by-letter dissection of Samberg’s new, recessionary identity; “Dude that has sex with pigs for money but only as a side thing right now, I’m just short on cash and have irons in the fire but in this economy it’ll have to do, my name is Lenny.”

Lonely Island’s “Spell it Out”

Perhaps the most stark reflection on recessionary masculinity comes in ‘Yolo’, which re-appropriates the generational hip-hop slogan ‘You Only Live Once’, to preach fiscal responsibility, while directly critiquing the financial institutions responsible for the financial collapse; “Then bury all your money in the backyard like a beagle / Cause you should never trust a bank / They’ve been known to fail.” The troubling racial connotations of critiquing the frivolous consumerism of a predominantly African American genre or culture are most pointedly felt when the featured rap artist on the song, Kendrick Lamar, sings the following verse, the joke seemingly being only the juxtaposition of a black musician and the dispensing of financial advice;

“Invest in your future, don’t dilute your finances/ 401K, make sure it’s low risk/ Then get some real estate/ 4.2%, Thirty year mortgage that’s important, that’s a great deal/ And if you can’t afford it, don’t forge it on your last bill/ Renting is for suckers right now, a dependable savings/ And you’ll retire with money in your account./ Beast.”

By appropriating the sexualisation and economic grandiosity of a traditionally racially coded genre, the Lonely Island, as well as other ‘fake’ white rappers, ironically parody the perceived failings of white masculinity in the recessionary era through exaggerated masculinity; all too often this is achieved through overt misogyny. As Alyx Vesey has alluded to, there are noted misogynistic undertones in a great deal of the Lonely Island’s output, not least of which is the worrying implication of pseudo-sexual violence within ‘Dick in a Box’.7 However, the Lonely Island’s proponents would posit that this is an ironic re-appropriation, using the perceived values of the hyper-masculine rap genre to parody those same misogynistic values. Here, though, we run into a problem when we consider the role of the spectator, as it is increasingly difficult to differentiate ‘ironic’ sexism from the endless deluge of ‘authentic’ discrimination to be found online.

With that said, one might posit a knowing-ness on the part of Lonely Island when it comes to their reflexive portrayal of recessionary masculinity; a new song, entitled ‘Spring Break Anthem’, which might appear at first glance to be a somewhat shallow exercise in homophobia and misogyny, could be construed as an elegant deconstruction and critique of white male hegemony and aspirational manhood. The video and lyrics, as the title suggests, offer a portrayal of the ideal ‘frat boy’ lifestyle, interspersed, oddly, with equally boisterous (and sincere) chants about gay marriage; “Kings of the pussy, pounding our brewskies / Banging chicks right there in the sand / Bros before hoes and chicks with no clothes and / Slammin’ shots and marry a man!”

While no doubt some of the Lonely Island’s significant fanbase might take the somewhat crude homophobia and staggering misogyny of the piece as a validation of those same beliefs, one could argue that this video directly contrasts gay marriage – portrayed here as lawful, elegant, and aspirational – against the hyper-masculine ideal of “trashing hotel rooms, clogging up toilets” and “crushing pussy”, in such a way as to question hegemonic masculine values. Here, heterosexual masculine norms are portrayed as hedonistic, over-sexualised, and socially damaging, traits that apply to an obviously fictive, but nonetheless widespread understanding of homosexual lifestyles. Not only is Lonely Island providing a positive (albeit subtextual) portrayal of the LGBT movement at a pertinent cultural moment to a wider, traditionally homophobic and misogynistic online audience, but in doing so, they are challenging the social acceptability of the implied values of recessionary white manhood.