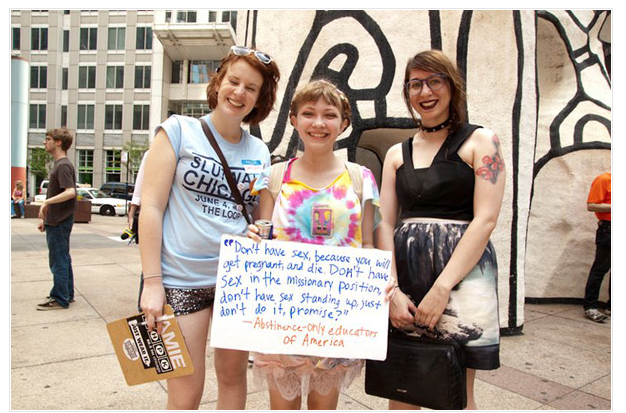 Having spent the past two years working on a dissertation that analyzes the practices of girl feminist bloggers – girls between the ages of fifteen and twenty-one who write feminist blogs — I have received more than a few blank stares and inquisitive eyebrow raises when I describe my topic of study. “Really?! There are girls who are interested in feminism today?” is a common inquiry.

Even at a recent conference panel attended by a room full of feminist media scholars I received similar reactions from my colleagues, who are often so focused on postfeminist1 representations of women and girls in popular culture they express disbelief that a feminist girls’ culture is simultaneously thriving. It is this embracing of a popular feminism within the climate of postfeminism by girls that I find particularly interesting and want to explore here.

It is worth examining then the feminist practices of girls and to take their feminism seriously. I want to emphasize this last point, as Dawn Currie, Deirdre Kelly, and Shauna Pomerantz (2009) note how girls are often understood as “ ‘the other’ of feminism’s womanhood” (4). Thus, taking the time to understand girls’ articulations of and practices of feminism from their own positioning as girls rather than from an adult-perspective (and our own ingrained notions of feminism based upon our positioning as adults) is a project that I’m arguing needs to be better taken up by feminists – both within the academy and beyond.

I have been fortunate enough to have met several young feminists through my research (which, I should add, has focused only on U.S.-based bloggers thus far), but here I want to focus on Tavi Gevinson, arguably one of the more vocal and well known teenage feminists today. I am suggesting that Gevinson deserves scholarly attention for her performance of a popular feminism that is informed by a girl subjectivity. In other words, we may be able to better theorize contemporary feminism by understanding how Gevinson complicates many of our assumptions about teenage girls as competitive and catty, vying for fame and celebrity, and certainly not interested in politics or feminism. 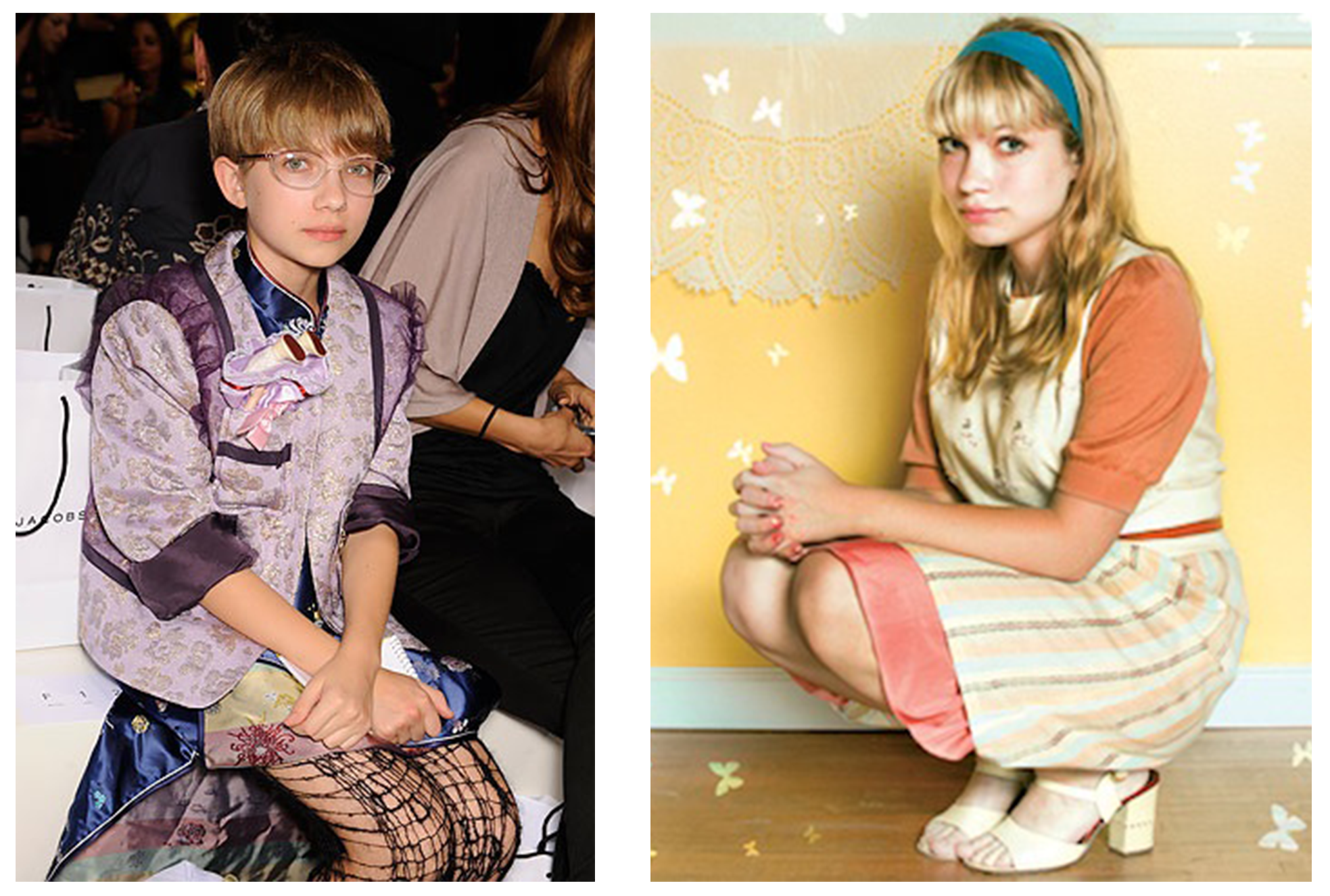 Tavi as a pre-teen (left) and more recently (right)

You’ve likely heard of Gevinson before – she’s been a regular fixture within American popular culture since 2008, when her fashion blog StyleRookie earned the then-preteen both acclaim and criticism from fashion insiders and pop culture commentators. More recently the suburban-Chicago based seventeen-year-old has been in the news for her role as founder and editor in chief of Rookie Magazine, an online magazine for teenage girls written with a feminist perspective and publishing articles such as “How to not care what other people think of you,” “First encounters with the male gaze,” and “A Girls Guide to Internet Protest.” Last year Gevinson edited Rookie Yearbook One, a printed collection of selected articles from Rookie’s first year and this October the second yearbook will be released to a now devoted following of teenage readers. 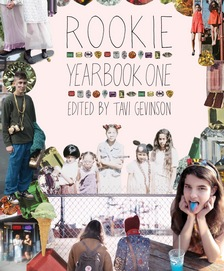 Cover of Rookie Yearbook One

It is easy to dismiss Gevinson as merely conforming to an idealized model of neoliberal girlhood, or as indicative of what Sarah Banet-Weiser (2012) calls a “media-savvy interactive subject,” who has become famous via an entrepreneurial individualism that has propelled her to celebrity status. This is one of the dominant discourses that frames Gevinson’s story within mainstream media. To wit: A cover story in the April 14, 2013 edition of Adweek describes Gevinson as a “media mogul” who is “expanding her empire.” Those who fail to closely read Gevinson’s interviews, check out the Rookie site, or see her TedxTeen talk on feminist role models in popular culture may miss Gevinson’s feminist politics, which coexist alongside her love for pop stars like Taylor Swift and Freaks and Geeks slumber parties.

Indeed, Gevinson is no doubt business-minded; she has learned how to market herself across media platforms and has arguably built a personal brand defined by her quirky personal style and dry sense of humor. But unlike many celebrities Gevinson openly embraces both girl and feminist identities, and is vocal about the importance of valuing girls as intelligent and creative in the present – a kind of girl power informed by riot grrrl in the early 1990s. For example, Gevinson’s comments to CNN earlier this year point to her affinity and respect for other girls’ cultural production. When asked why she thought StyleRookie became so popular she responds, “I think at first it was a shocker that someone so young was using the Internet publicly for some reason. I never imagined it would be seen outside of these other girls and young women who were also playing dress-up and making collages of movies they liked.”

Such comments demonstrate Gevinson’s resistance to the popular framing of herself as exceptional, as markedly different (smarter, wittier, more talented) than other teenage girls. Instead Gevinson hints that contrary to girls’ assumed positioning as consumers within the private sphere, girls are publicly engaged in valuable cultural production without the guidance of adults. While postfeminist popular culture privileges teenage girls as consumers of commercial (fashion and beauty) products, Gevinson reminds us that girls often subvert this role into one of cultural producer, yet their practices often go unrecognized by mainstream popular culture – and are also too often absent from feminist conversations.

Gevinson has also built a community of girls around Rookie, and organizes events not only for her readers to meet her, but perhaps most importantly, for readers to meet one another. In summer 2012, for example, Gevinson travelled across the United States with a couple of Rookie writers, stopping off in both urban centers and small towns and meeting readers in ice cream shops, parks, and community centers. In her final tour diary entry posted on Rookie she encourages Rookie readers to continue this community building practice:

And now, I encourage you all to organize your own Rookie meetups—we were only the hosts, after all, so you can totally pull it off! I try to never explicitly mention the goals of Rookie because I’m constantly terrified that we’re not meeting them. One, however, is just to attempt to suck out even a fraction of the sadness that exists in the world. I don’t know if you’re sad or not, but you guys are always talking about trying to find other Rookie readers, who are probably likeminded humans, where you live, so you have all of our blessings and encouragement in seeking them out. Then, there will be a little less sadness in one corner of the world, and maybe even a few new friendships, and a few new flower crowns or zines or photos. That sounds pretty good to me.

While Rookie’s meet-ups may not be the public demonstration we envision when we think of collective politics, they do resemble the consciousness-raising circles popular with women liberationists, and twenty years later, riot grrrls. A posting by Gevinson about the Philadelphia stop on the Rookie Road Trip tumblr describes the meet ups as a mix of cultural production and consumption, politics, and pleasure : “After shopping we headed over the Rittenshouse Square Park to listen to the records we bought (Violent Femmes was on at full blast) and make pennant banners out of fabric. We had an interesting group chat and feminism and its place in fashion and we also tackled tricky questions such as “Clueless vs. Heathers vs. Mean Girls: which is the best?” It was a fun day of crafting in the park and listening to vinyl!” Not only do these gatherings demonstrate how “online” participation can in fact translate into friendships, relationships, and interactions in “offline” spaces, they also complicate dominant discourses that suggest teenage girls are catty, mean, and willing to sacrifice friendship for their own celebrity and social status. 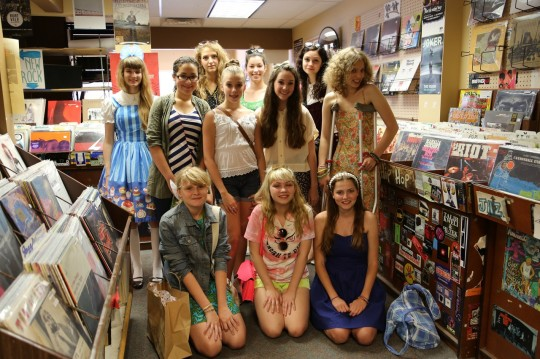 Finally, it’s worth recognizing that Gevinson’s feminist politics not only embrace a riot grrrl-informed girl power, but also pay tribute to the more commercial brand of girl power embodied most notably by the Spice Girls, but also by contemporary performers like Taylor Swift. The Rookie article “In Defense of the Spice Girls” is emblematic of the ways in which Gevinson’s own feminism rejects the false divide between commercial and alternative cultures, as she truly understands the porous nature of these categories within our digital media environment. But Gevinson uses this to her advantage, merging feminist politics with girls’ popular culture and making it accessible to her peers. To Gevinson, feminism is not a “rulebook” but a practice that girls can make work for themselves today in their everyday lives as girls.

The above discussion is not an attempt to give a comprehensive analysis of Gevinson, her feminist politics, or her media production, but instead I hope to begin to make visible some of the ways in which girls’ feminism is being produced and circulated within popular culture. Gevinson is not the only girl doing this — although she may be the most famous – yet she offers feminist media scholars the opportunity to see the cultural ruptures within postfeminist media culture, spaces where an inspiring girls’ feminist culture is flourishing.