Reactions toward disliked in-group media figures: The role of ethnicity on perceived social appearance
Adolfo R. Mora / The University of Texas at Austin 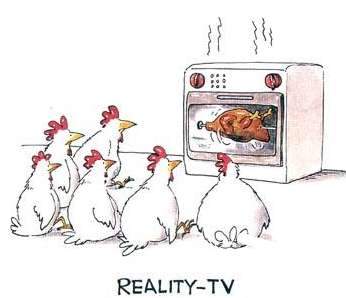 Liked (fictional or real) media figures drive audiences into repeated text exposure due to the identification and other gratifications they seem to provide, while disliked figures occupy a less optimistic role in consumers’ enjoyment of the narrative.1 Disliked media figures therefore tend to exert the least amount of change/influence, perceived similarity, identification (i.e., psychologically merging with characters), and parasocial interactions than liked or even neutral fictional characters.2 But what frames unfavorable mediated bonds and reactions toward disliked media characters when audiences share ethnicity as perceived similarity with them?

Media reception and audience studies document that audience discontent, particularly among ethnic minority media consumers, is partly due to the the less flattering social images that promote criminal prototypicality and other socially deviant norms (e.g., linguistic, economic), which in turn positions them as the ethnic Other. Such characterizations thus fosters disliked parasocial relationships and/or interactions for the stigmatized media audiences who share an ethnic ingroup with the character. Social appearance then obtains a central role in how audiences engage with media characters. Consequently, through a qualitative content analysis of 30 student essays from a Southwest Texas University, this article decoded the socio-psychological distance between audiences and in-group ethnic media figures based on disliked social appearance.

For one of their weekly prompts, college students (predominantly Health and Kinesiology majors) in an introductory communication course were solicited to identify the characteristics they disliked in a TV/film character that shared the same ethnicity as them. The prompt additionally asked respondents to discuss characteristics they would like to amend thus transforming him/her into a favorable character. The author performed a qualitative directed content analysis3 with the following as codes of interest: (a) ethnicity, (b) gender, (c) type of character (real – RTV personas, actors, comedians; fictional – figures who belonged to scripted narratives), (d) medium character belonged to (i.e., TV or film), and (e) mediated unattractive social appearance (see Hoffner & Cantor, 1991; inner appearance – character attractiveness; outer appearance – physical attractiveness; task attractiveness – defined here as performance failure). 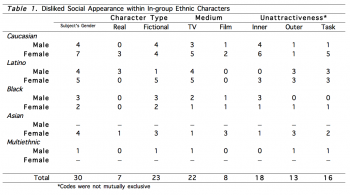 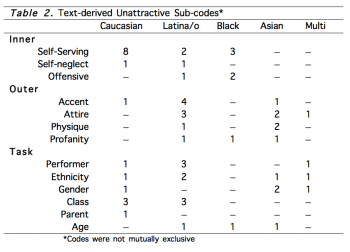 The observed lack of intravariability within outer appearance unattractiveness among European-Americans suggests that ethnic minorities continue to voice their marginalized status in the media. That is, the aforementioned reception disparity among audiences reinforces the notion that ethnic minorities gravitate and question the stoic and ethnic-specific markers within clichéd media imagery that hinder their social status4. Although this is a general concern regardless of declared membership status, the perpetration and unflattering historical imagery of ethnic minorities supplements audiences’ concerns toward media offerings that promote lowered social statures. In light of this, European-Americans and Latina/os used class as a maker for disliking media figures. But the former formalized class as the deterioration of social status that White trash media figures catered (e.g., Honey Boo Boo, Prison Break’s Teddy) whereas the latter enunciated the absence of social mobility with characters whose occupation was identified as the help (e.g., Family Guy’s Consuela, Esteban in The Suite Life of Zack and Cody). Hence, ethnic-specific characteristics and its accompanied social cognitions serve as catalysts for disliked interactions and possibly in-group content alienation.

The heavy presence of self-serving characterizations as a disliked trait hints to the universality and necessity of communal or non-egoistical exemplifications within media figures. The low observed frequency of self-serving attributes among ethnic minorities seems to suggest that collectivism exist within the inhibited narrative or character discourse more often. For instance, Elena (Latina, 24) acknowledged the overt familial-collective environment that operates with the Russo’s in Wizards of Waverly Place (Disney, 2007—2012), and instead, questioned how the family’s last name was “a strategic way of excluding the Mexican last name…[or the children’s] embarrassment of their parents’ culture.” Putting others before him/herself and collaboration as the preferred changeable trait across ethnic groups further attested to the ethno-universality toward unselfish-communal character qualities, which in turn, raises the likelihood for fertile mediated bonds and media influence.

The present research also offers preliminary evidence to suggest that audiences may care about what happens to disliked characters within and beyond the proposed narrative. For instance, Bonnie (Asian, 20) commented the following about Tela Tequila – a reality TV personality, “If she were still be a playboy model, at least be classy about it and not trashy. I also think she should do more of a reality show that can have a purpose to other people rather than what is best for herself.” Brian (Multiethnic, 26) questioned Santillo Marella’s (WWE wrester) Italian accent and foo-foo performance plus expressed that “if audiences saw that he meant business…[others would not] make fun and be taken seriously not only by the fans, but by the other wrestlers in the promotion.” Lastly, Amelia (Latina, 20) disclosed the following about Esteban Ramirez in The Suite Life of Zack and Cody (Disney, 2005—2008): “They made him seem like he was stupid and incompetent to everyday life. Also him being a bell boy, why not change him to a co-manager…something like that can have a positive impact on my culture.” Besides precaution, these quotes also demonstrate the complexity and intersectionaliity of various identities. Hence, future research should not seclude ethnicity but consider its intersection with other identity categories when addressing text-audience reception.

Why fictional TV characters as disliked in-group media figures? Since TV shows function as serials, there is ample room for continued exposure versus the temporal experience of films. Moreover, given that fictional characters are fabricated, audiences may question such production practices because real characters have agency in their actions. There is also the possibility that chosen TV fictional characters were non-protagonists or carried limited narrative weight thus attributed an unflattering social appearance because “stagnant characters are common folk that aren’t remembered, but when the lead is flat, he/she probably won’t be liked” (James, Black, 28). This, in turn, is of relevance among ethnic minorities given their minimal and low-status presence in the media5.

It is important to acknowledge some limitations of the current study. First, one-page double-space essays handicap in-depth reflexivity. Second, college students do not behave in the same manner as other young-adult audiences for they may bring education and social mobility to their interactions with media texts. Third, the present study also considered both fictional and real media figures in its results, but it is wise to separate them according to medium characters belong to and its corresponding genre to understand parasocial interaction/relationship variability. Lastly, researchers should consider ethnic identity affinity and other audience identity backgrounds for robust assessments.