The combined impact of Hispanic population growth, expectations about market opportunities, linguistic competencies, media viewing patterns, the cultural attachment to certain media televisual products, and the paramount role of broadcasting media for Latinos resulting from their still limited access to cable and the Internet have driven Hispanic television networks’ growth and viewership. Hispanic TV has boomed, from two national broadcasting networks in the early 2000s to seven in 2012, while Hispanic cable television has shown an explosive growth to more than 75 national networks at the end of the decade1. However, in the context of a Post-Network Era2 with a fragmented media environment, in contrast to the trend of shrinking viewership of the main four national mainstream networks (ABC, CBS, NBC and Fox), Hispanic networks have experienced increasing ratings numbers and record viewership in the last five years, in particular for the Spanish-language network Univision.

I have argued that the analog system of signal distribution and the scarcity of spectrum space have historically served as de facto barriers to the entrance of new Hispanic television networks as competitors for U.S. Latino audiences at national levels3. The new digital broadcasting landscape appears to have torn down the aforementioned barrier, by the new opportunities of multicasting that allow a single TV station to broadcast several TV signals simultaneously (sub-channels). However, while multicasting broke space barriers by opening opportunities for emerging new networks, it has also created a deeper hierarchical barrier to achieve visibility, by the increasing dependency on sub-channels by these new Latino-oriented broadcasting networks.

While I am aware of the complex set of socio-cultural factors in which audiences’ preferences and viewing habits operate, I want to underline a structural factor that seems to be increasingly dismissed in the context of the digital conversion era that is the shaping power of broadcasting technologies in Hispanic television. While Tuner and Tay point out that “television is no longer a stand-alone medium”4, Lotz still reminds us that in a multichannel environment, “networks and channels have remained as important sites of program aggregation”5. This function is still critical in the case of the Hispanic television industry. I want to discuss the Hispanic broadcasting infrastructure as a crucial site of distribution that shapes the differentiated fortunes of competing Spanish-language national television networks. This is a media space in which control over the infrastructure of broadcasting distribution of the Hispanic networks has not only secured changes of viewership and cemented certain networks’ leadership, but it has also become the base from which broadcasting networks have aggressively pursued audiences’ loyalties for their multiple digital and mobile platforms. The new atomization of the Hispanic televisual offerings has not threatened but rather cemented the long-time dominant position of Univision by translating its wide broadcasting appeal into the digital environment.

In claiming a particular percentage of broadcasting’s geographic coverage of Hispanic households, it has been a vital step for networks to receive recognition by Nielsen to ensure commercial viability. Particularly, reaching the threshold of 70% Nielsen coverage has been crucial for a network’s progress toward their further integration within the National Television Index (NTI), an important step to securing economic sustainability through ad revenues. Besides Univision and Telemundo, Azteca America, UniMás, V-me, Estrella TV and MundoFox have also achieved status as national networks in the last decade. Technologies of multicasting played a crucial role in the emergence of these new national networks, yet such technologies also reveal the increasingly uneven nature of their techno-legal character.

The uneven infrastructure in the analog broadcasting era illustrated by the legal and technological advantages of Full Power Stations (FP) versus Low Power Stations (LPTV) is further deepened by the new possibilities of signal transmission with digital FP and LPTV main digital channels (0.1), and their multiple sub-channels known as (Non 0.1). The FCC’s legal framework that governs the must carry and retransmission consent rules in which networks secure FP-privileged access to cable systems and which gives them further economic compensation, reinforced a privilege that is not afforded to the emergent number of television networks through LPTV or the multiplying number of sub-channels carried either through FP or LPTV digital stations. 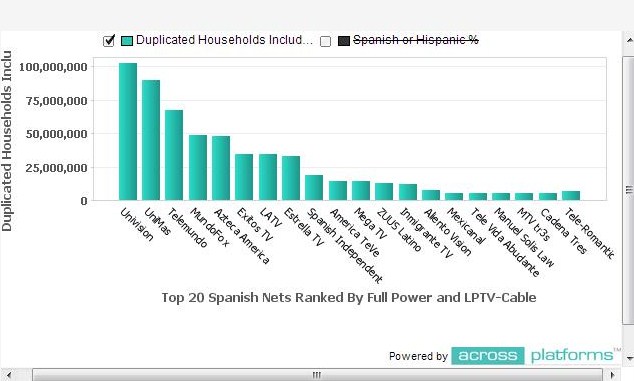 Hispanic Networks
Source: Sub-channel Report within the Across Platforms site

Then if we take a closer look at the composition of the Hispanic national networks and their broadcasting infrastructure, we can find at least some of the reasons for their long-lasting dominance as hegemonic corporations. In the context of the must carry rule, the lack of FP TV stations of Azteca America, Estrella TV and MundoFox in several markets relegated them to the upper channels of the cable systems dial, while the same rule secures preferred positions for Univision, UniMas and Telemundo. Furthermore, the transmission consent rule has allowed the Univision TV Station Groups and the NBC TV Station group to be understood as Owned and Operated (O&O) entities, so the Univision/UniMás and Telemundo networks have a commercial advantage as TV station owners. In 2011, a report found that the main networks ABC, CBS, NBC, FOX, the CW and Univision would be getting $3 billion dollars by 2015 merely for retransmission fees, of which $1.7 billion would go to their O&O TV stations and $1.3 billion to their affiliates6.

Furthermore, a study of 16 TV Station groups has found an increase of 46 percent in retransmission fees, rising from an average of 26 cents per costumer in 2009 to 33 cents in 2011. This increase reflects the fact that Univision Communication leads this trend with its retransmission fees of 61 cents per customer7. Furthermore, the combined impact of the FCC’s rules on foreign broadcasting ownership and the national TV ownership/ local TV multiple ownership have prevented Azteca America and MundoFox to develop a network based on their own O&O TV Stations. The economic advantage for a Hispanic network supported solely by its own broadcasting TV infrastructure clearly adds to its already hegemonic position in the market8.

Furthermore, hierarchies of impact are better understood if we also take into account the combined effect of technological status and presence in the main Hispanic markets. The capacity to be visible and have an impact in the cities with the largest Hispanic populations largely defines the future fortune of each network. For instance, out of the 210 Hispanic Designated Market Areas (DMAs) across the country, the 30 largest Hispanic markets represent 78 percent of the entire Hispanic TV Households in the U.S. Even more important is the paramount role of the 10 largest markets for Hispanic media. If we consider only the ten DMAs of Los Angeles, New York, Miami, Houston, Dallas, Chicago, San Francisco, San Antonio, Phoenix and Harlingen, they represent 51 percent of the entire universe of Hispanic TV homes in the US9. The importance of both this market and demographic reality is expressed through the way Univision/UniMás and Telemundo have made their presence known in these main markets, but particularly in the ten largest DMAs10. 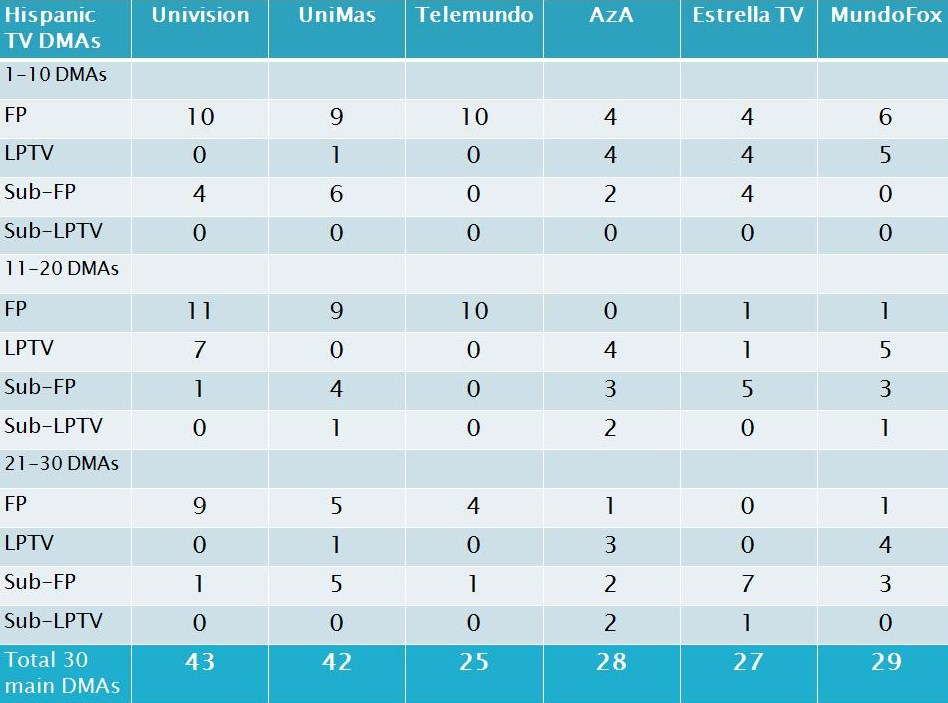 Table 2. Networks presence in the 30 most important Hispanic DMAs
Source: Data from Across Platforms.

The decisive broadcasting presence of Univision followed by Telemundo and UniMás in the markets is mirrored by their respective rating numbers and market shares. In 2013, Univision continued its hegemonic position in the market with 55 percent of the audience share coupled with 15 percent of audience share captured by UniMás, its sister network. Univision Communications in total, thus, has 70 percent of the total share of broadcasting television, while Telemundo, the second ranked television network and its long time competitor, only has 22 percent. In 2012, Estrella TV solidified its position as the fourth largest television network with 3 percent and Azteca America the fifth with 2.4 percent, while for MundoFox there are not yet annual numbers available.

The hegemonic nature of Univision’s broadcasting position has also been translated into its hegemonic position online. Since 2000, Univision’s website (Univision.com) has been consistently ranked as the most visited Spanish-language website in the U.S11. Furthermore, the aggressive campaign the company pursued with the merger of their Univision Móvil and Univision.com divisions under the banner of Univision Interactive laid the administrative and technological groundwork for an aggressive strategy of video delivered through different digital and mobile platforms over the last five years. This campaign resulted in the recognition of Univision as “the multiplatform broadcaster of the year” at the end of 2012”12. While the growth of Univision’s content through cable, digital and mobile platforms is central for Hispanic corporations, the structural basis of its hegemonic presence and further growth has been initially and crucially based upon securing a strong broadcasting infrastructure in the most important markets across the nation.