It’s (Not) In His Kiss: Gay Kisses, Narrative Strategies, and Camera Angles in Post-Network Television Comedy
Alfred L. Martin, Jr. / The University of Texas at Austin 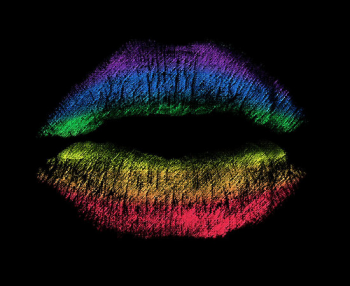 Gay male (and overwhelmingly white) characters are all over the major networks. This increased visibility is one of the reasons Logo (the alleged network for lesbian, gay, bisexual and transgender people (LGBT)) decided to revamp its programming to broaden what was available on the Viacom-owned network. Gone were series that narratively focused on the stories of LGBT protagonists like Noah’s Arc and in their place were shows largely recycled from other Viacom-produced series including 16 and Pregnant – a decidedly hetrosexual text.

On one hand, increased visibility is not new in the post- Ellen/ Will & Grace era in which we live. After all, the Gay & Lesbian Alliance Against Defamation (GLAAD) has kept track of the seemingly ever-increasing number of LG (sometimes B and rarely T) characters on television since 1998. 1 On the other hand, what is new about these characterizations in the last five years is that they have largely been corrective. Indeed, these television representations closely mirror the “Super Negroes” of the 1960s and 70s led by Diahann Carroll’s Julia and Bill Cosby’s Alexander Scott on I Spy. These seemingly “perfect” black characters were lauded for their respectability while at the same time being accused of having lost any semblance of what makes them “authentically black.” In examining gay and lesbian representation, once Ellen DeGeneres came out on her eponymous sitcom and in her personal life (to much mass-mediated attention), when she chose to deal with the trials and tribulations of being a newly-out lesbian navigating the dating world, the show was deemed “too gay” by some viewers and was subsequently canceled by the network. Conversely, some critics and viewers lambasted Will & Grace for never allowing Will to seriously date (an “oversight” that was corrected near the end of the series) and creating Jack as a caricature who embodied all the “negative” (read: effeminate and hypersexual) stereotypes of yore.

Television shows continued to include gay characters, but they were faced with a dilemma: how would they respond to criticisms that gay characters remained woefully celibate and single without scaring a presumed heterosexual viewing majority by inserting the actualities of gay sexuality? The answer has been the creation of a hybridized representational strategy wherein gay characters would be partnered (thus foreclosing the necessity for an active dating life, as single heterosexual characters are often afforded) and either with children or desiring children (as a way to mirror heteronormativity) while single gay characters are narratively imbued with character traits that function to explain why the characters are not romantically involved and express little desire to be romantically linked. Additionally, I want to discuss the ways in which the choice of camera angles can engage (or disengage) the viewer in notions of gay sexuality.

I discuss three current network comedies here that help to illuminate what I am exploring. ABC’s Happy Endings fits into the eternally single category while NBC’s The New Normal and ABC’s Modern Family are among the shows that fit in the camp of married gay characters on television. Modern Family is perhaps the heir apparent to the Will & Grace legacy in terms of popularity and includes Cameron and Mitchell, who are partnered with an adopted child and hoping to have another. More importantly their relationship is largely devoid of romantic interaction. As pressure mounted to have the characters kiss on screen, largely led by a Facebook campaign, (in an episode appropriately titled “The Kiss”) the characters ultimately kiss. “The Kiss” in the show’s title happens toward the end of the episode. The first kiss—a homosocial one— occurs between patriarch Jay (Ed O’Neil) and his son Mitchell (Jesse Tyler Ferguson). As is often de rigueur for kisses between men on television, the kiss between Jay and Mitchell is an over-the-shoulder (OTS) shot and is appropriately filled with the anxiety hegemonically “required” when two men kiss. However, this same anxiety is not often required for opposite sex smooches, which happen far more often than same sex kisses. Instead, as the image below demonstrates, Cameron (Eric Stonestreet) and Mitchell often settle for a hug while the series’ heterosexual couples are allowed a kiss not shot in an OTS. 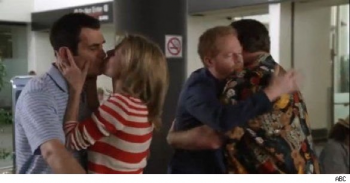 When the kiss viewers hoped for occurs between Mitchell and Cameron, their kiss is secondary in the frame that privileges the kiss between Jay and his daughter Claire (Julie Bowen). Additionally, the sheer difference in distance from the camera is apparent in the two shots: in the first with Jay and Mitchell, the camera frames the image in a medium close-up, while the second kiss with Cameron and Mitchell is the foreground is almost a long shot. Additionally, after the kiss, viewers learn the reason Cameron and Mitchell do not show more affection toward one another is conveniently rooted in Mitchell’s issues with public displays of affection. This neatly circumvents future campaigns by allowing the producers to be able to point to the show’s Bible and say, “they do not kiss because the show Bible dictates that Mitchell has issues with showing affection,” while ultimately tethering these gay bodies to a notion of televisual respectability by divorcing same sex affection from narrative possibility.

The New Normal, the newest television comedy of the group I discuss here, features a gay white middle class couple, David and Bryan (Justin Bartha and Andrew Rannells respectively) who want to have a child via surrogate. Although the series’ first two episodes include scenes wherein the series’ two protagonists kiss, the first of the two is shot using two OTS shots with quick cuts that work to minimize the impact of the kiss by breaking up the viewer’s attention, similarly to the way in which Modern Family’s homosocial kiss happens. In other words, a sustained shot allows the viewer’s gaze to linger absorb the kiss in a way that is not otherwise allowed by the quick cuts. The second episode features a kiss, this time, a two-second smooch in a neighborhood bar frequented by gay men. This kiss, however, takes place within the context of damning those gays who are not partnered and looking to start families the way these “model minority” gay subjects desire. In other words, the kiss is a way for the characters inside this narrative universe to thumb their noses at those gay people who have not assimilated into middle class heteronormativity, or homonormativity as it were. However, the third episode features two kisses, both shot in straight on close ups. The first kiss works as a narrative device to allow the show to enter a discussion about the double standard involved in same sex versus opposite sex displays of affection. But the second, safely domesticated in Bryan and David’s home, is a straight-on, close-up show which allows viewers a kiss between the couple that is not designed for any narrative point other than to show that two men are in love with one another. 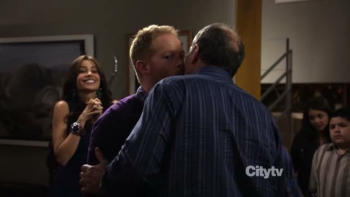 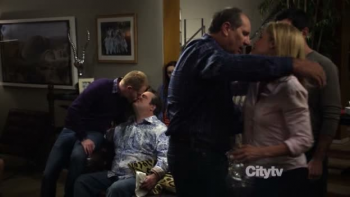 On Modern Family, the kiss that is intended to convey same sex affection, it is foregrounded in the shot.

While coupledom is often a strategy to avoid same sex sexuality (with The New Normal perhaps a new exception), the alternative method for (not) tackling gay sexuality is to depict the eternally single gay man. When single gay characters appear within television texts, those characters are often sidled with narrative foibles that ensure they remain single so as to guarantee that the presumed heterosexual viewer does not have to be confronted with the “sex” portion of homosexuality. This trope can currently be observed on ABC’s Happy Endings, an ensemble comedy featuring six friends in Chicago. Max (Adam Pally) is a gay man who is described as “a dude who likes dudes,” a character trait The Advocate finds “unexpectedly refreshing” because the character does not conform to the “stereotypical” ways in which gay characters are often portrayed. Even as Max is allowed to date a man named Ian, the two not only do not kiss, they actually exchange a “bro’s hand shake” after Max declares that while he is interested in dating, he wants to remain casual rather than seek a long term relationship. Interestingly, the scene was originally shot with the two kissing goodbye, but according to series creator David Caspe, the kiss did not work once they were editing because it seemed too real. I argue, what “did not work” and was “too serious” about the “kiss” is the ways in which allowing gay characters to kiss on network television might challenge notions of normativity. Instead, if a gay character professes his desire to remain romantically unattached, then there is no need to deal with the perceived messiness of gay romance. 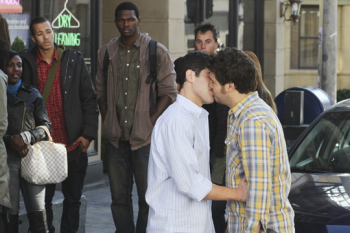 while this is the way in which the final cut aired

After a series of articles in gay media outlets bemoaning the lack of intimacy allowed Max, season two found him dating Grant and the two are allowed to kiss in an episode. In this instance, the OTS is again used to mitigate the impact of seeing two men kiss on television. In addition, Grant’s hand is artfully placed such that it obscures (presumably) the viewer’s ability to see their lips touching. Ultimately, after a three-episode arc, the two break up because Grant does not want children – a seeming betrayal of the new televisual homonormativity. In other words, while Max may not want to currently settle down, he also does not want a relationship that might foreclose on his chance to have the American homonormative dream. 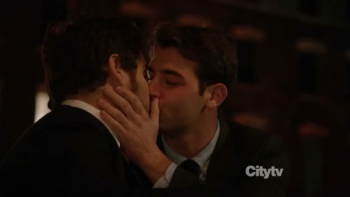 Ultimately, major network sitcoms in the post-network era purport to explore modern families and/or new idea(l)s about normativity, but they do so by presenting a particularized gay body that works to placate an imagined heterosexual viewership. “Concerned” groups continue to mount campaigns against the very representation of gay bodies on network television because of the imagined damage it could do to “the children.” Additionally, some station owners, like Salt Lake City’s Latter Day Saints-owned NBC affiliate, refused to air some series that feature what they deem inappropriate content.

[youtube]http://www.youtube.com/watch?v=zlarXXkt2xI[/youtube]
The New Normal utilizes two quick OTS shots to mitigate the impact of a same sex kiss in its pilot episode

Certainly producers and writers are attuned to the ways in which reception works among all viewers, but especially their gay viewers, and often attempt to portray gay characters in a way that cannot be construed as offensive. In the post-network era, new narrative strategies have been deployed to maintain heteronormativity. From the OTS and the long shot to camera distance and framing, cinematographers often use their art to give gay viewers just enough to placate them so they cannot launch Facebook campaigns decrying the ways a show romantically treats its gay characters. The New Normal may represent a new phase in the ways in which the camera treats gay relationships and challenge televisual heteronormativity, but The New Normal is a Ryan Murphy show, and the constant in his shows is often their inconsistency.