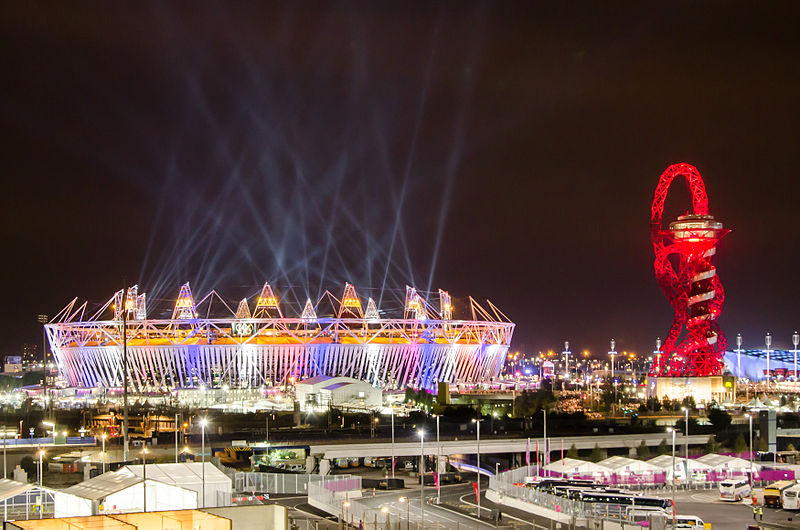 London’s Olympic Stadium and The Orbit

The shadow of Beijing looms large in Danny Boyle’s 2012 London Olympics Opening Ceremony, whether one admits it or not. The spectacle on July 27 has done everything to out-perform the 2008 Beijing extravaganza by following a rather simple strategy: whatever China did, we do the opposite. Since China was serious, we go for the light-hearted. China’s was a dream of orderliness and harmony, orchestrated within a collective ethos; ours would be one of chaos and cacophony, only because we celebrate individualized freedom.1 If China’s self-projection manifested the Communist Party’s burning desire to be recognized globally, we might as well throw a big party to show them how we rule (as an older global power).

One could even add that the tribute to Tim Burners-Lee’s invention of the World Wide Web served as a populist counter-point to the Chinese high-tech frenzy, rendered through director Zhang Yimou’s mechanized “state aesthetics.” “This is for everyone,” Burners-Lee’s line, has seemingly set the tone for the London ceremony, as an event of, for and by “the people.”

In his Oscar-winning Slumdog Millionaire (2009), Boyle has already demonstrated his ability to subsume a seemingly realist depiction of the subaltern – in this case the poverty-stricken underworld of Mumbai, India – within a familiar narrative of Hollywood (if not Bollywood) romance. He is as skillful in providing a quasi-critique on the globalized reality TV franchise (Who Wants to Be A Millionaire) as in embracing the principles that sustain its success. In this sense, Boyle indeed “wins the Gold” in London. He wins it in the same way he won the Oscar, by representing the masses in a manner that is in line with the long-standing ideological operation of the culture industry. But he also arguably succeeds in carrying the apparatus to a new level in the age of reality TV.

This, again, may be seen as a response to Beijing. One may recall that one of the most embarrassing moments of the Beijing Games was the lip-synching incident at the Opening Ceremony, first reported by The Telegraph. Lin Miaoke, the nine-year-old girl with a pretty face who sang a nationalist song to accompany the entry of the flag, turned out to be “faking” the performance; her “voice” actually belonged to Yang Peiyi, a seven-year-old who was not chosen because of her “crooked teeth.” Pictures of the two girls subsequently flooded the transnational mediascape, causing much criticism of China’s routine “suppression” of its people and their real talent. Adding to the fakery scandal was a subsequent report uncovering that the children representing the 56 ethnic minorities in a crucial part of the ceremony actually belonged to Han, the country’s dominant ethnic group. 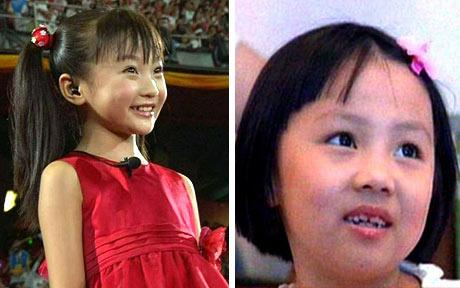 It is as if Boyle took these incidents to heart when he opted to showcase real people in his ceremony, from the volunteer performers, the nurses-turned-dancers, to the deaf and mute children’s choir. All are represented, including and especially the ugly, the weak, or the ill – if not in the stadium, then as faces printed on the sign bearers’ outfits in the Parade of Nations. 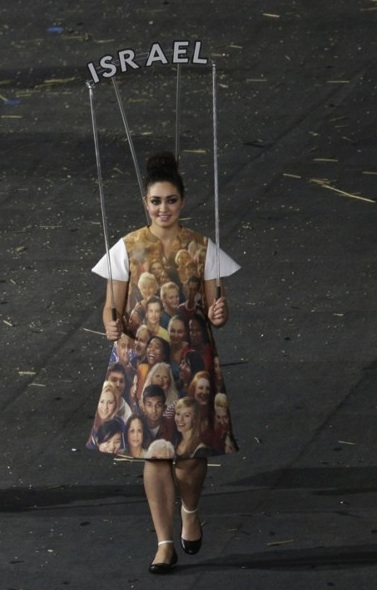 Volunteers’ faces printed on the outfit of a sign bearer

The highlight moment came when the workers who helped to build the stadium were lined up to welcome the Olympian fire. Their (less-than-five-second) presence almost outshined that of David Beckham in the final stage of the torch relay.

Boyle also spared no effort in highlighting what he believed to be the two best things coming out of the United Kingdom: children’s literature and the National Health Service. While the latter was bound to strike a nerve in election-year America, where socialism remains a dirty word if not a weapon for the Right, it also led some Chinese to ponder on the apparent contradictions within China’s own “socialism with Chinese characteristics.”

Children’s literature, on the other hand, opens another set of questions about culture and power. Compared to the cultural artifacts on display in Beijing, the British-originated products showcased in London are much more global in appeal. No matter how elegant Chinese calligraphy or how flamboyant Peking Opera might appear to foreign eyes, they remain confined to the realm of the exotic Other. In no position are they to compete with the array of globally celebrated figures on the London stage, from Peter Pan to Harry Potter, from Sir Paul McCartney to Mr. Bean. While it was surely breathtaking to see the Chinese gymnast Li Ning fly around the stadium in the style of a Kung Fu master, nothing can beat the Queen’s jumping out of a helicopter in the manner of a Bond girl. More than clearly demonstrated is the hegemony of global Hollywood – of which Boyle is part – as well as the industrialized and hence inherently globalizing cultural system it represents.

There is, however, a similarity between the two ceremonies. Just as the entire twentieth century was rendered invisible in the Chinese spectacle, the era of imperialist-colonialist expansion was also non-existent in the UK version. One may argue that Beijing downplayed its Maoist revolutionary subjectivity precisely to prevent an outburst of the West’s post-Cold War paranoia. For Boyle, the job of displaying agents of social change is much easier within a fairly coherent system of civil disobedience, hence fulfilled by presenting on screen the nineteenth-century suffragettes. As if to strike a more deadly blow, London’s bearers of the Olympic flag consisted of human and civil rights activists, whose Chinese equivalents, as it is well publicized in Western media, are a perennial headache for Beijing.

A critical engagement with the universalized particularity of human rights is beyond the scope of this essay. But a comparison between two key scenes of the ceremonies in Beijing and London would suffice in calling attention to the unequal power relations that persist in a postcolonial world order.2 So far, no one seems bothered by the fact that it was not the Queen herself who jumped out of the helicopter in the London spectacle. Some, however, were deeply troubled by a similar use of cinematic montage in Beijing as to call it a “fake”: the firework-footprints that brought the twenty-ninth Olympiad to the Bird’s Nest on the television screen was found to be recorded rather than live, even if real fireworks did take place outside the stadium. 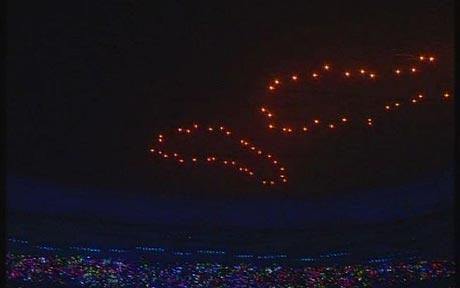 Surely, in the London case, Her Royal Highness’s agreement to shoot the scene at all is already baffling enough. To question the identity of the jumper would appear to destroy the British humor so fully exhibited. But the absence of this questioning speaks to a deep-seated acquiescence of power. To be sure, the royalty-turned-celebrity is not the same as the old imperial throne that ordered the Opium War. But one cannot help but notice the contrast between the taken-for-grantedness of this hierarchy and the simultaneous tendency to view the Chinese state (alone) as an embodiment of absolute power.

Ideologically framed discrepancies of this kind are so prevalent that an alternative reading of the Beijing ceremony is almost impossible. But the effort is worthwhile nonetheless. In an opening scene of the 2008 event, 2008 Chinese soldiers performed on an ancient percussion instrument called fou. While their bodily movement reflected the vast human labor behind “made in China,” the effect of their collective actions composed a digitized landscape. 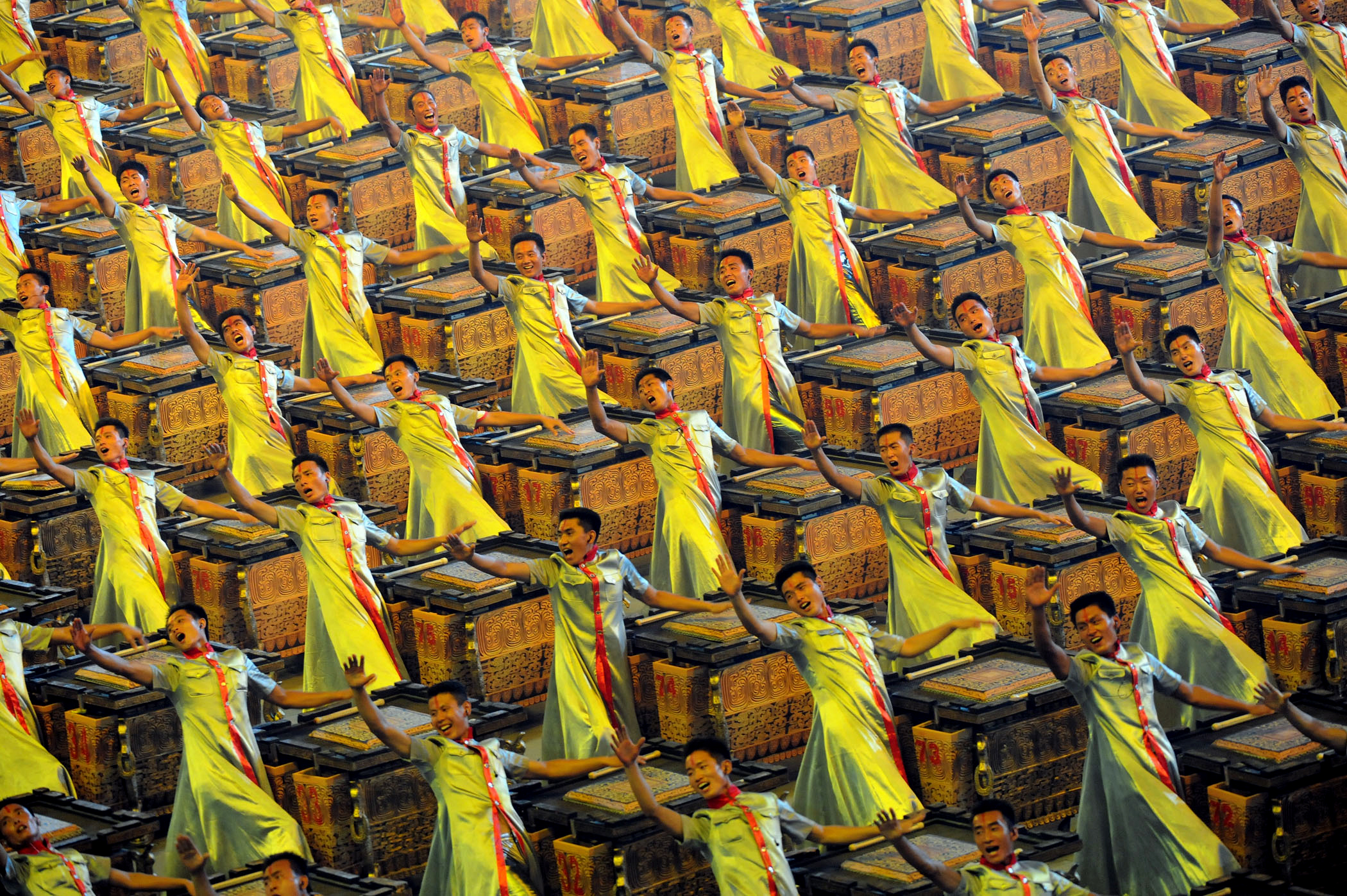 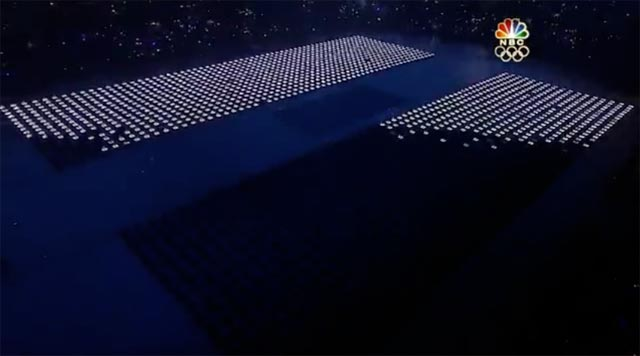 Implicit is a commentary on the human cost of China’s rise, a display of mass subject that offers an opening to critique the real productive conditions of the information age. This representation of subjectivity stands in stark contrast to Boyle’s boy-meets-girl-via-cell-phone story. In that new-media-saturated narrative, the society of spectacle operates in full force: machine commodities displace social relations, screens blind players from seeing the game, and class consciousness is fragmented by the hidden codes of the communications network.

1. The Olympic Stadium in London
2. Left – Lin Miaoke, the “face”; Right – Yang Peiyi, the “voice”
3. Volunteers’ faces printed on the outfit of a sign bearer
4. The “Faked” Footprints
5. The Soldiers Performing Fou
6. The Digitized Landscape Composed by Human Labor