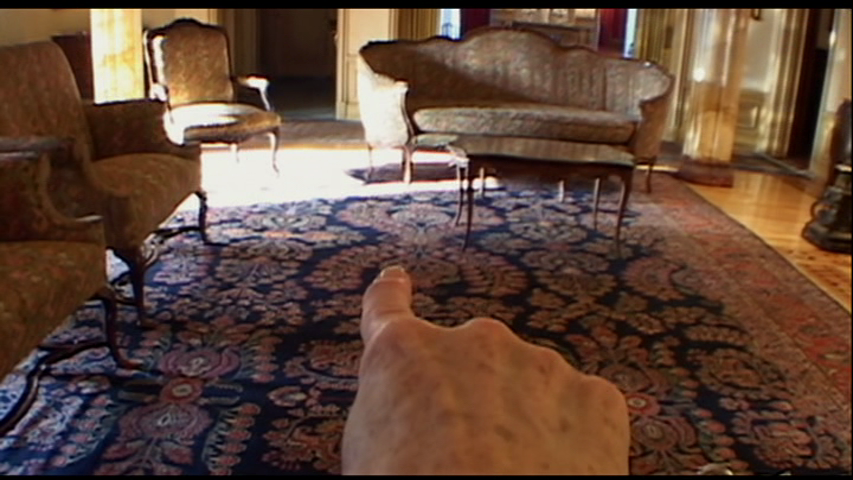 In The Straight Story, a secret passage opens in the mouth. Alvin and his older brother Lyle no longer speak to each other after having fought ten years earlier when they “said some things [they] shouldn’t have” to each other. Each of them has spoken too straight; both of them straight talkers. But for each, saying what needs to be said, talking straight requires a certain convolution, a detour from the straight and narrow, a form of talking straight that strays, that requires one to say too much and to say in the end things one shouldn’t have. In the end, at the end of the road, one ends up not talking at all. At the end of language, the end of language. From saying too much to not talking at all, the regulation of language in particular, but a larger economy of the mouth determines a variety of passages in The Straight Story. Alvin’s daughter Rose stammers; she speaks in small bursts, as if propelling or expelling the words from her mouth. She also carries a deep wound from the loss of her children, which remains unspoken. Alvin stopped drinking, because he drank too much in an attempt to suppress the memories (and guilt) of war (World War Two) he carries inside him. Throughout his journey, Alvin talks to strangers, telling them intimate details of his life, building toward a confession in a bar to stranger over a glass of milk. Alvin had accidently shot a comrade during World War II; his guilt appears to be less over the accident than his silence, his refusal to speak of his fatal mistake, to accept responsibility before others. The mouth in The Straight Story is a secret passage, and a passage for secrets; a way in and a way out that is not always accessible.

In a world that appears to be largely as it appears, the other side of The Straight Story exists in the sky, in the frequent shots of the nighttime sky and stars; the other side of earth and of life. The imminence of death, for Alvin as well as Lyle frames the temporality of The Straight Story. Of Lyle’s house, which marks the endpoint of Alvin’s journey, which is also marked as the near-endpoint of life, Michel Chion says: “This poor dwelling seems the endpoint of a life, from where the only way out, in visual terms, is the starry sky above.”1 The refrain of the sky and the floating camera of this film establish a world other than that depicted; a second, other world that hovers above the finite and visible world of The Straight Story. Lynch says: “With The Straight Story I wanted the film to have a floating feeling. I particularly wanted that quality to come through in the aerial landscape shots, and it took a lot of explaining to get the helicopter pilots to slow down enough to get the look I was after.”2 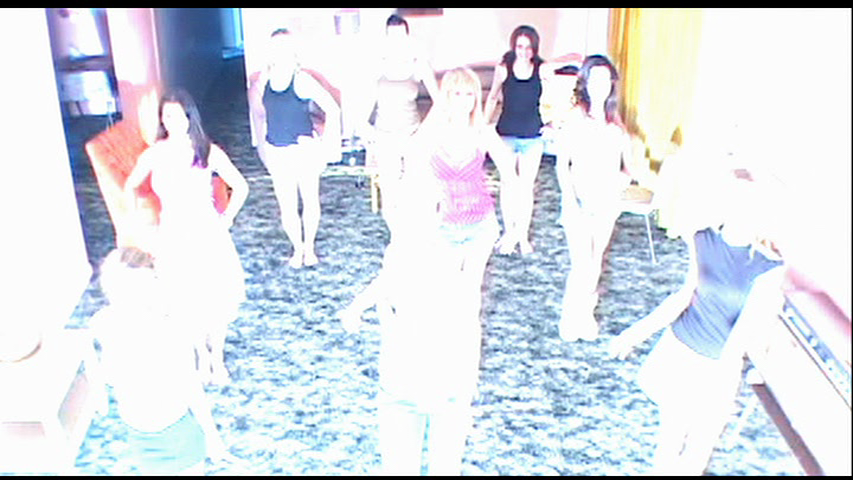 The passages are most labyrinthine in Inland Empire, where the fragmentation of places, times, scenarios, identities, and psychic conditions produces a schizoid frenzy. (Martha P. Nochimson says, “Here time present is also time past and time to come.”)3 During a rehearsal scene for the planned film “On High in Blue Tomorrows,” the first reading for its principal actors, Nikki Grace (Laura Dern) and Devon Berk (Justin Theroux), to be directed by Kingsley Stewart (Jeremy Irons, an actor known for, among other things, his doubled role as twin gynecologists Beverly and Elliot Mantle in David Cronenberg’s 1988 Dead Ringers), a disturbance on the nearly completed set interrupts the reading. Devon investigates the disturbance and, hearing retreating footsteps, he chases the intruder deep into the darkened set to its end, the façade of a house. After peering into the window and seeing only darkness unfolding (it appears to be unfolding, darkness from darkness), he returns to the reading and reports that someone, “disappeared where it’s real hard to disappear.” At this point the director, Kingsley, reveals the secret history of this production.

“On High in Blue Tomorrows,” it turns out, is a remake. Or rather, the resumption of a film that was never completed. (Nachträglichkeit.) “It was based,” says Kingsley, “on a Polish gypsy folktale. The title in German was ‘Vier-sieben,’ four-seven.” (Worlds within worlds: a Hollywood remake of a Polish gypsy folktale with a German title. But there is more: 47 is the room number where Majid lives in Haneke’s Caché, which references Lynch’s Lost Highway, in the anonymous videotape and the surname “Laurent,” from Dick to Georges. Toward the end of Inland Empire, a Susan Blue finds herself in front of a room 47. Within Haneke Lynch, Lynch within Haneke.4 ) Before the film was completed but after production had begun, the two leads were murdered. “It was said to be cursed,” says Kingsley. The other side, the other world is already entering into the present, into the living. One world haunting the other. Nikki’s tears, which stream as she begins to read from the script as if on cue, fuse multiple worlds into one; theater, cinema, narrative, history are blended in her tears. One world leaking into another.5 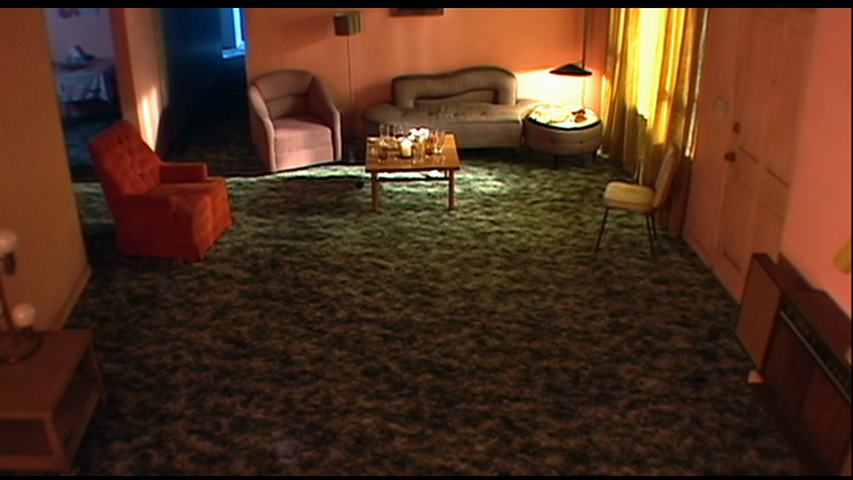 The other side of this scene appears slightly later in the film. Nikki Grace has now slipped into her character, into an alter ego, Susan Blue. Back and forth, in and out. The worlds meet temporarily when she enters a building, passes through a darkened corridor and continues onward until she sees at the other end a rehearsal, the same scene from the other side. One hears Nikki’s voice, “Oh shit, look in the other room,” as Susan walks toward the camera, her face slowly materializing from the darkness at first blurred then slowly tightening into focus. Susan is herself the intruder, another figure of herself, a second self occupying the same body (Laura Dern’s) here and now, but elsewhere. The displacement that Lynch forges is made even more radical by the point of contact he facilitates. Susan watches the four at their reading (Devon, Nikki, Kingsley, and his assistant, Freddie Howard, played by Harry Dean Stanton), seeing herself there, elsewhere. This ecstatic trope appears throughout Inland Empire: in the opening scenes when Visitor #1 (Grace Zabriskie) appears, here, and again later when Susan sees herself on the other side of Hollywood Boulevard. As in the previous scene, Devon leaves the reading to investigate the intruder. Susan watches him approach but after a cut to her face and an offscreen comment by Nikki, the camera returns to the table where Nikki is now missing (only Kingsley and Freddie are there). Nikki has disappeared from this scene, just as Susan (then unknown) disappeared in the earlier scene. A symmetry of appearances and disappearances.

In a repetition of the earlier scene, Devon enters deeper into the set and Susan retreats, increasingly frantic. Susan’s husband Piotrek Król (Peter J. Lucas) watches the scene from a window. Seeing him, Susan calls out in warning, “Billy!,” the name of the character played by Devon. Nikki and Devon, inside this scene, inside this set, have become the characters they play in their film. Two worlds, one ostensibly real, the other a film diegesis have crossed into one another. Billy doesn’t hear Susan’s warning; Devon runs toward the end of the set, the façade of a house. Susan turns toward the house, which lights up as she approaches. With husband watching, Susan opens the door of the façade and enters into a room, a contiguous room not accessible to Devon in the earlier version of the scene, into the other side, another world. The instant is electric, a surge and flow of energy from side to another. Susan has crossed over and back, and appears to have taken Nikki with her. 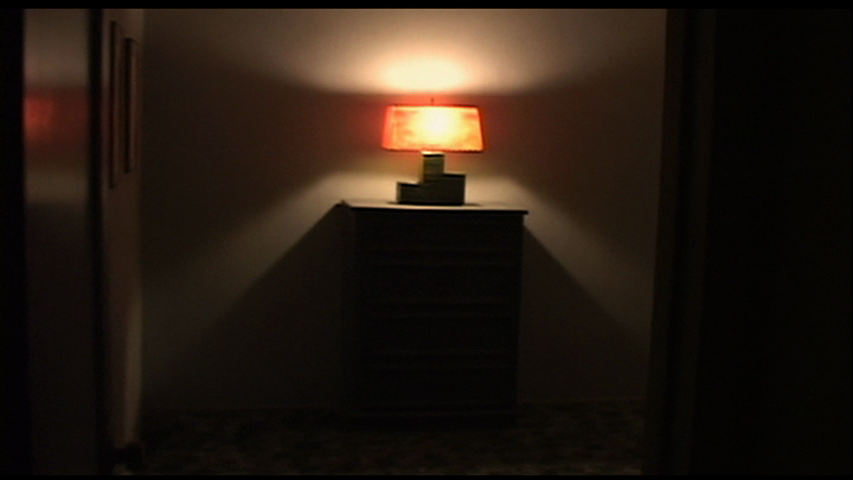 Susan shuts the door behind her and slowly turns to observe the darkened pink room in which she finds herself, loses herself. (It is a room like so many of Lynch’s rooms, familiar in its unfamiliarity.) Susan rushes back to the door, which she can no longer open. Devon/Billy’s shadow appears at the window. Calling to him, Susan peers out and sees the previous shot of Devon looking into a darkened window. If this is indeed the same shot repeated, then Lynch has sutured two different worlds: in the first scene, Devon looks into a darkened surface, into nothing, an empty space behind a façade. In the second version of the scene, Susan is there, looking back at Devon, now Billy, who looks into the room. He seems to see nothing, but Lynch inserts a reaction shot of Susan calling out “Billy.” A reaction shot with no subject: he looks and one sees what he does not, Susan looking back at him, calling to him. There is no subject in this sequence, although it consists of a shot and reaction shot. A reaction with no subject; two worlds, each with discrete agents, a point or moment of apparent contact in which one world flows, surges into another, but the inhabitants of each world fail to form subjects to each other and with one another; each occupies her world, his world, alone. 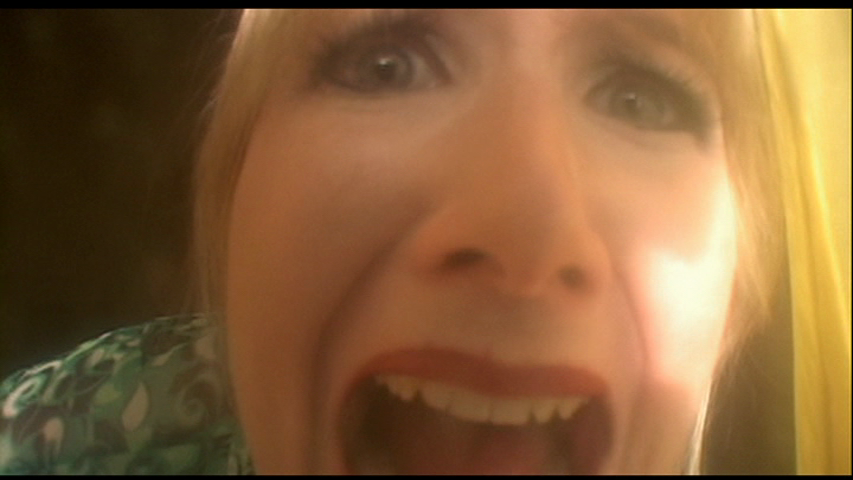 (Eventually Devon and Billy are gone; outside a garden, contiguous to the house that Susan occupies. After a brief return to the darkened set through a lace curtain, the set recedes permanently and the diegesis settles around the house: a garden, enclosed by a gate, beyond it a street, and on the other side a house. One plane after another extending into space, the world unfolding around this house that is now sealed in its own world. The transition complete, the passage between the worlds of Nikki and Susan, Devon and Billy, reality and cinema has closed. The switch has been shut off, the current between the worlds interrupted. Susan is now free to exit. The door opens into the yard, which she steps into. The outside is now merely outside and no longer ecstatic.)