The Dialectic of The Weather Channel
Doyle Greene / Independent Scholar 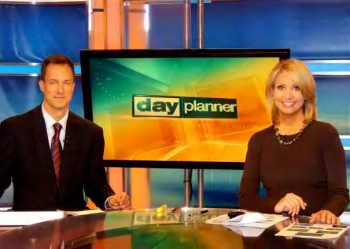 The Weather Channel (TWC) programming consists of continuous weather reporting along with weather-themed shows such as Full Force Nature, It Could Happen Tomorrow, Storm Stories, Storm Riders, and When Weather Changed History.1 While it doesn’t necessarily sound like gripping TV, TWC functions as a cultural and political discourse. More specifically, TWC can be read as constructing a dialectic between paternalistic meteorology, encouraging mass submission to the weather, and heroic meteorology, valorizing individual domination of nature. Ideologically, this becomes a dialectic representing the powerlessness of the masses versus the power of great individuals.

The bulk of TWC’s weekday daytime programming is Day Planner, which airs Monday through Friday from 10 a.m. to 4 p.m. (CST) with extended afternoon hours as current or potential severe weather conditions warrant.2 Despite the ostensible cheerfulness—the bright color emphasis of the visuals as well as the jazz and rock instrumental snippets that accompany the montages of regional weather radar maps—Day Planner’s emphasis is on the potential nuisances, possible risks, and pervasive threats posed by the given day’s weather conditions.3 Equally important, Day Planner proscribes the myriad precautions viewers need take.

During the winters of 2010-11 and 2011-12, coverage of the numerous snowstorms across America included advice on safe driving, what to include in roadside emergency kits, and how to avoid frostbite, hypothermia, and seasonal depression. In the summer of 2011, reports of record temperatures, heat indexes, and drought conditions in the South were accompanied by segments concerning heat stroke and wildfire prevention. Not surprisingly, Hurricane Irene was TWC’s primary focus between the latter half of August and early September 2011, with continuous coverage of the impending arrival, the probable hazards, live feeds of local and statewide press conferences regarding evacuation plans, city-by-city live reports of the hurricane’s impact, and the resulting widespread damage. 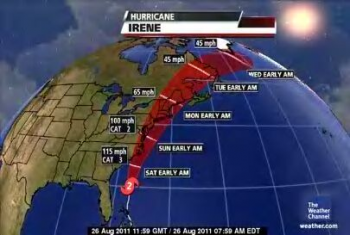 Indeed, while “day planning” programming is the constant, TWC’s raison d’être is extended live coverage of severe weather outbreaks as they happen and their immediate aftermath (e.g. the 2011 tornado that leveled Joplin, Missouri). Moreover, TWC’s speculative documentary series It Could Happen Tomorrow depicts hypothetical weather scenarios as guaranteed disasters waiting to happen: an earthquake decimating Las Vegas, a hurricane annihilating Tampa, a flash flood engulfing Boulder, or a wildfire incinerating San Diego. Weather safety experts not only extrapolate the eventual certainty of such events but sternly reproach any public apathy and lack of readiness while the correct course of action is manifestly clear: “You can’t beat Mother Nature,” “Run from the water, hide from the wind,” and “Don’t find yourself in this situation.” Ultimately, while Day Planner is routine and It Could Happen Tomorrow is apocalyptic, both shows are instructional. They act as a paternalistic meteorology for the masses, guiding them through their daily helplessness in the minutia and potential havoc of the weather. The message to the audience from TWC is they should always be prepared, always use precautions, and when things become too dangerous always run and hide. 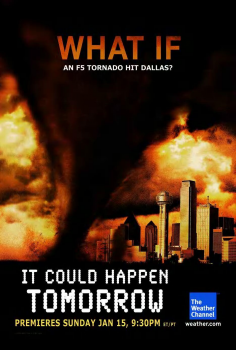 Promotional Image for It Could Happen Tomorrow

Like many niche networks, TWC has cultivated a stable of stars and one of the most prominent of these is Jim Cantore. As TWC’s designated “storm tracker,” Cantore provides live, on-location reports of potential or actual weather calamities and their immediate aftermath, all in a manner that suggests the weatherman as protagonist of an Ernest Hemmingway novel (one might say, “for whom the barometer tolls”).4 He is also the star of Cantore Stories, a documentary series in which Cantore tours various regions across America in order to experience what they endure (summer in the Louisiana bayou, winter in International Falls, Minnesota) as well as the narrator of Storm Stories, inspirational chronicles of survival through individual and group heroism effort in moments of weather crisis.

In Dialectic of Enlightenment, Max Horkheimer and Theodor W. Adorno write that “all power in class society is tied to a nagging consciousness of its own impotence against physical nature and its social descendents—the many.”5 This ultimately becomes the ideological crux as well as the contradiction of TWC. While TWC continually reminds its audience of their powerlessness against the weather, it simultaneously valorizes those who actively dare to dominate nature at its most threatening. The underlying message is not only an affirmation of romanticized rugged individualism through the extreme outdoorsman; Jim Cantore is the most visible embodiment of heroic meteorology on TWC. While the many are taught to fear the weather, Jim Cantore is among the select few who are fearless against nature.6 As Horkheimer and Adorno stated in their critique of The Odyssey, “[T]he knowing survivor is also the man who takes the greatest risks when death threatens, thus becoming strong and unyielding when life continues.”7 As TWC ventures into the next maelstrom, Jim Cantore acts as TWC’s Odysseus while the TWC viewers are relegated to his oarsmen. 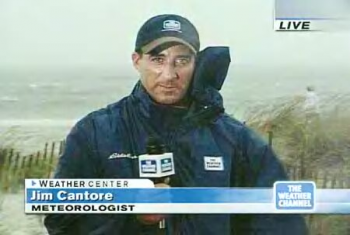 Amid America’s prevailing political climate (pun intended) of neoliberalism, TWC overtly emphasizes “personal responsibility” in dealing with the weather: individual preparation in the present decreases the cost of future disaster both in terms of money and life. However, the dialectic of TWC becomes more problematic. Paternalistic meteorology reminds the mass audience external regulation is a necessity component of daily life amid the continual promise—as opposed to threat—of imminent disaster whereas heroic meteorology emphasizes the great men who conquer the elements and, by extension, the cowed masses. TWC brands itself around the word “authority”: “Hurricane Authority,” “Winter Weather Authority,” “Severe Weather Authority.” In this way, TWC is not only self-promoted as television’s bastion of weather expertise, but the authority figure over the TWC audience by constructing a media citizenship as “one nation under the weather” governed by TWC. The issue becomes the degree TWC as America’s weather authority conflates paternalistic and heroic meteorology into weather authoritarianism.