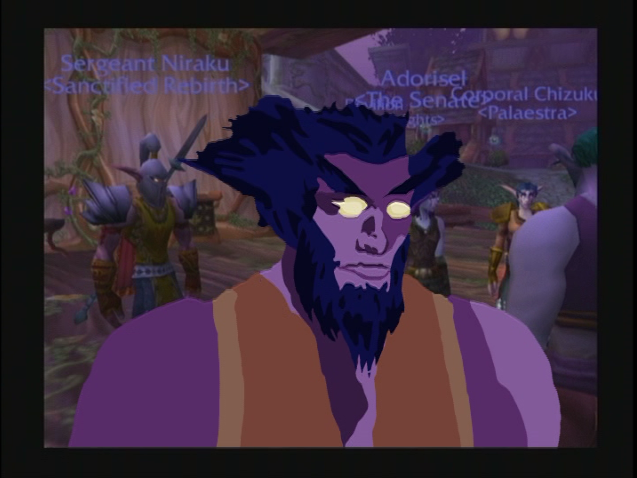 In Jacqueline Goss’s Stranger Comes to Town (USA 2007), green Orcs and purple Night Elves appear to discuss their experiences of U.S. customs and immigration policies. The humanoid forms of avatars from the massively multiplayer online role-playing game (MMORPG) World of Warcraft (WoW) perform difference between citizens and non-citizens in the United States, as the video’s critical texture emerges within its assemblage different types of animation and anonymous interviews. By appropriating and reworking sound and visual images from machinima shot in WoW and Google Earth’s program that allows users to fly over 3D renderings of satellite and aerial photography with a United States Visitor and Immigrant Status Indicator Technology (US-VISIT) documentary, Goss identifies what might be called the “unseemly” intervals within the purportedly seamless interface of digital technologies.1 Like Alex Rivera’s short video Why Cybraceros? (USA 1997), discussed in “Race and Labor, Unplugged: Alex Rivera’s Sleep Dealer,” Goss’s video reanimates an extant documentary that draws upon rational discourses of scientific progress and national exceptionalism to divert attention from corporate capitalism and racialization. If Rivera’s video exposes ways that globalization and digitization converge on the bodies of non-citizens along physical borders according to U.S. immigration and labor laws guided by private industrial interests, then Goss’s video exposes a similar convergence on non-citizen bodies along the “virtual” borders according to customs and immigration policies that use the purportedly objective technologies of biometrics.

2–4: Three views of a WoW avatar: machinima, rotoscoped, and prepared for biometrics.

Goss reanimates the US-VISIT animated documentary to contest its implied claims that racially/ethnically determined “barred zones” and “national quotas” of U.S. immigration law before 1965 have been replaced by racially/ethnically blind policies. One such policy is the “layer of security that uses biometrics” in US-VISIT. Biometric systems include a variety of means by which the physical bodies and behaviors are rendered as digital information that can be sorted for verification and identification. Promoted for its ability to “protect” privacy and “prevent” identity theft, US-VISIT is an identity-management system that collects biometric data, such as fingerprints and retina scans, to control the mobility of “international visitors” at points of entry to and departure from the United States.2 Goss complicates the scientific efficiency of biometrics by interviewing people on their experiences of US-VISIT. “You can calculate who will stop the line because he or she looks a certain way,” comments one of her subjects on variations in wait time. In biometric systems, the term “failure to enroll” (FTE) describes an event that occurs when the biometric program’s algorithms cannot capture data, when they cannot scan bodies in ways that produce legible data. FTEs often cause additional layers of security and longer wait times in queues containing bodies that fail to enroll.

Goss allows her subjects to be identified only by their voices, which are mostly “accented” according to normative U.S. standards of spoken English, and by what they reveal about themselves in words. Their visual identities are camouflaged under rotoscoped machinima and critically inserted into the US-VISIT video [images 2–4]. Developed during the 1910s by Max Fleischer, rotoscoping typically involves frame-by-frame tracing over images from live-action filmed sequences, so that movements and expressions appear natural; however, Goss rotoscopes over the “action” in the animated US-VISIT video precisely to denaturalize its assumptions about biometrics. As Tess Takahashi argues, the video can be considered a “speculative documentary” for its use of “animation’s formal malleability to emphasize the uncertainty of much of the information we encounter.”3 Goss’s rotoscoped copies of images disrupt the original video’s conceits of clarity and objectivity through simplified graphics and limited colors that promoting legibility for—and of—international visitors [images 5–6]. Black stick figures suggest an ease and orderliness with which visitors are processed. They resemble familiar stick figures on toilet signage in airports.

If live-action films rely on facial expressions and bodily gestures to convey emotional meaning, then these graphics erase that level of meaning, generating the appearance of a rational and impersonal system. They adapt principles from constructed universal pictorial languages, such as Otto Neurath’s Isotype (International System of TYpographic Picture Education), to suggest that all international visitors are treated equally and fairly. The figures resemble ones on Department of Transportation (DOT) road signs, as well as in internet memes that parody DOT caution signs about “illegal aliens” crossing highways by revealing “illegals” as seventeenth-century Christian pilgrims from northern Europe and “aliens” as beings from outer space [images 7–9].

Goss challenges the universalizing strategies of stick figures by replacing them with avatars from WoW whose racial/ethnic, class, and sexual characteristics are exaggerated in caricature. By representing US-VISIT’s international visitors (aka “aliens”) as humanoid avatars, her video reanimates processes of differentiation that are erased by biometrics yet continue to sort international visitors according to race/ethnicity, sex, religion, class, and nationality. Goss’s video asks what biometric information might look like in playback.

The humanoid silhouettes of Night Elves and Orcs reanimate particularity within the universalizing stylization of human figures [images 10–11]. In one scene, a Night Elf watches as fellow arrivals approach a US-VISIT kiosk [image 12]. His jagged beard and spiky hair distinguish him from the smooth, shaved or bald, heads of the other figures. Paired with the voice of Goss’s male Egyptian subject, the characteristic silhouette of a Night Elf visualizes ways that the DHS might tag and sort biometric data to produce results comparable to racial/ethnic, religious, or national profiling. Other scenes include DHS officers identifying WoW humanoids on their computer screens and rotoscoped WoW avatars looking at other WoW avatars on US-VISIT screens [images 13–14]. By making DHS screens visible, Goss exposes invisible layers of mediation within the US-VISIT application of biometrics. Bodies are made legible for security. In another scene, a female voice describes the inspection of her “private parts,” perhaps so that her records can be tagged as female, in a procedure not visualized with the male-only stick figures in the US-VISIT video. Like new media in general, data can be tagged, sorted, and recombined according to needs by data aggregators, and algorithms can be programmed to make interpretations automatically.4

12–14: Goss’s interpretation of screens within the US-VISIT user interface.

Goss’s male Egyptian subject discusses changes to his mobility and sense of identity after the USA Patriot Act of 2001 and National Security Entry-Exit Registration System (NSEERS, or “Special Registration”) of 2002 for male nationals of states categorized as predominantly Arab and/or Muslim by the United States [image 1]. Identity is tied to biological data from scans, which is translated into political categorizations (“risk assessment”) and racial/ethnic profiling that are, in turn, internalized. Living in the so-called cosmopolitan diversity of New York City, he thought that being Egyptian was irrelevant until he experienced certain DHS procedures. The information gathered makes him knowable according to anything that is “broadly physical” yet renders him invisible and unknowable in terms of everything else like how his friends and family know him or how he feels about being in the United States. “Am I here because of a girlfriend or to make more money or because I don’t like it in Egypt, that, they have no idea about,” he explains; “and I don’t think that it would to translate them in any way because actually it doesn’t translate into a document.” Special Registration makes him legible as suspicious. Before when asked whether he was Muslim, he would reply that he was not; now, he says that he was “brought up in a Muslim family” but “is not religious.” “That’s the kind of difference,” he explains. Identity is prescribed and precedes the individual. Self-definition functions according to the anticipated criteria of others; it is ever contingent.

Goss links the animated security world of the US-VISIT video, the satellite-view of the “real world” of Google Earth, and the role-playing world of WoW, explaining her attraction to the MMORPG due to its “game-logic that suggests that species and races of avatars naturally belong to specific geographies.”5 WoW relies on an understanding of the isomorphic correspondences of nation and state in modern nation-state that produces certain bodies as belonging “naturally” in certain places, as appearing “normal” there. Players select avatars by race and class according to political allegiance with one of the two warring factions: Alliance or Horde. Goss asked her subjects to select an avatar. Canadians chose to represent themselves as Orcs, a non-native race to Azeroth where most action takes place, aligned with the Horde. Their “naturally brown skin” turned a “sickly green” due to exposure to “fel magic” which caused their “ancestral lands to wither and die.”6 Egyptians and Argentineans represented themselves as violet-skinned Night Elves on the Alliance side.

The video incorporates machinima shot in WoW. A process of recording video of live gameplay within the game engine developed in the 1990s, machinima emerged as a means of sharing tricks and cheats among videogame players. It has also become a mode of narrative filmmaking. Goss’s use of the 3D animation rendered by the game engine differs from the original stories, literary adaptations, and amateur music videos (AMVs) that are often shot in SIMS and WoW.7 The machinima sequences in experimental and amateur media, such as She Puppet(USA 2001; dir. Peggy Ahwesh) and Red vs. Blue: The Blood Gulch Chronicles (USA 2003–2007; dir. Burnie Burns, Matt Hullum, and Geoff Ramsey), comment upon commercial video games that are designed to “entertain.”8 Those in Stranger Comes to Town serve to protect (rather than confirm) the identity of Goss’s interview subjects, as well as to reanimate a certain “game logic” within the US-VISIT video on biometrics.

Goss’s video opens with a fly-over an undifferentiated blue landscape. A female voice describes going for a “biometric recording for immigration” in “same building, interestingly enough, of the national archives.” Towards the end, images from Google Earth focus on digital renderings of militarized zones, such as the Line of Control (LOC) between India and Pakistan in Jammu and Kashmir and the Ceasefire Lines between Syria and Israel in the Golan Heights [images 15–16]. These zones are reminders of wars and violent displacements of millions based upon assumptions that political geography can be mapped onto cultural identity, often with race/ethnicity and religion as prime vectors of segregation. Globalization propels migrations over borders that might not be tagged with names [image 17].