2 Broke Girls (Or, One American Dream with a Side of Alienation)
Doyle Greene / Independent Scholar 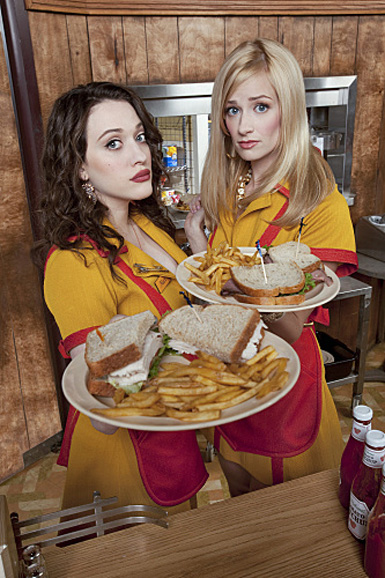 The possessing class and the proletarian class represent one and the same human self-alienation. But the former feels satisfied and affirmed in this self-alienation, experiences the alienation as a sign of its own power, and possesses in it the appearance of a human existence. The latter, however, feels destroyed in this alienation, seeing its own impotence and the reality of an inhuman existence.
Karl Marx, “Alienation and Social Classes” (1844; emphasis original)

As the title indicates, the sitcom 2 Broke Girls (CBS, 2011) revolves around two young women and their economic plight.1 Max Black (Kat Dennings) is a sharp-tongued diner waitress living and working in Brooklyn.2 Despite her defiant demeanor, Max is grudgingly resigned to a life of insurmountable debt, piecemeal existence, service employment, and “no future.” Her counterpart is newly-hired waitress Caroline Channing (Beth Behrs), a billionaire socialite now penniless, homeless, and persona non gratis to her upper-class peers after her father was arrested for engineering a Ponzi scheme. The family fortune was seized by law enforcement and Caroline is woefully unprepared for the harsh reality of a low-income lifestyle.

However, while Max is the hardened product of the school of hard knocks, Caroline is a shrewd graduate of the Wharton School of Business; on her first day of work, Caroline made two dollars in tips through incompetent job performance but made over $300 selling Max’s cupcakes at a grossly inflated price. The two soon become friends, roommates, and business partners with the goal of earning $250,000 to open their own cupcake shop, and each episode ends with a title card showing the “current total” of the money accumulated (as of the first five episodes, $593.25). 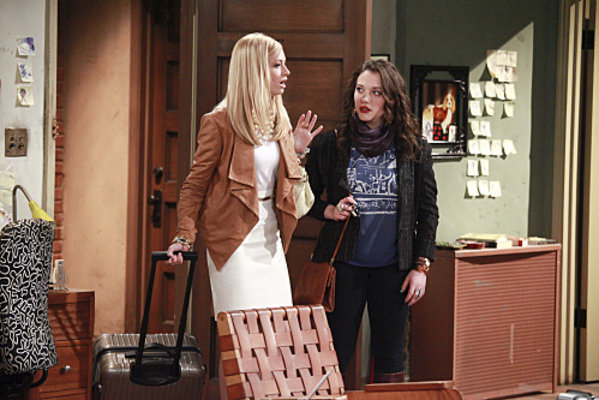 Overall, 2 Broke Girls has initially proven to be a commercial and critical success for CBS, although The Washington Post and The Huffington Post negatively reviewed the premiere episode as derivative of The Odd Couple (ABC, 1970-1976), a somewhat inaccurate assessment. The Odd Couple centered on two heterosexual, middle-class men (slovenly sportswriter Oscar Madison and prissy photographer Felix Unger) separated from their wives and tensely living as roommates in a masculine-feminine gendered, same-sex domestic “couple” relationship. To be sure, Max and Caroline are confirmed heterosexuals, and 2 Broke Girls compensates with surplus sex-driven comedy to reinforce the fact they are two straight girls living together for reasons of economic necessity. Their duality is structured around Max’s raunchy “tough guy” swagger and seasoned “street” attitude – she even has a masculine first name and the surname “Black” – while Caroline exudes “spoiled diva” pomposity and strained “white-trying-to-pass-for-black” mannerisms.3 This binary of difference (masculinity/femininity, blackness/whiteness) is juxtaposed with Max representing the uncouth proletariat and Caroline the ostentatious bourgeoisie, together finding common ground as a class “odd couple” mutually separated from money.

In this way, the underlying drive of 2 Broke Girls is rectifying the conflicts and contradictions of class society by sustaining the affirmative ideology of the American Dream and the Horatio Alger myths (i.e. “from rags to riches” and “pulling yourself up by the bootstraps”). Louis Althusser suggests

Ideology…is the expression of the relation between [people] and their “world,” that is the (overdetermined) unity of the real relation and the imaginary relation between them and their conditions of existence. In ideology the real relation is inevitably invested in the imaginary relation, a relation that expresses a will (conservative, conformist, reformist, or revolutionary), a hope or nostalgia, rather than describing a reality.4

For both Max and Caroline, the real relation is being members of the working poor while the imaginary relation is their mutual hope of social mobility. Framing this around Marx’s critique of alienation and social class, Caroline represents the possessing class suddenly demoted to the proletariat class. Her financially empowered “appearance of a human existence” is abruptly transformed into an impoverished and powerless “reality of an inhuman existence,” and her bourgeois alienation is now realized as proletariat alienation. Max is the proletariat class trapped in an economically impotent “reality of an inhuman existence” with no apparent recourse until Caroline provides a glimpse of a better future; more correctly, a false consciousness generated around the allure of affluence as the “appearance of a human existence” where proletariat alienation is now imagined around bourgeois alienation. In the episode “And the Rich People Problems” (2011), the duo sneaks into Caroline’s impounded townhouse to retrieve a dental bite guard. When Max sees how Caroline lived before her drastic class adjustment, she is unable to conceal her awe to the point that Caroline tells Max she is “embarrassing her.” Max emphatically responds: “This is nothing to be embarrassed about!” Not only does Max develop greater sympathy for Caroline’s situation as well as new respect for Caroline’s resolve to overcome it, but Max briefly experiences the possibility of economic luxury – and begins to desire it as well. 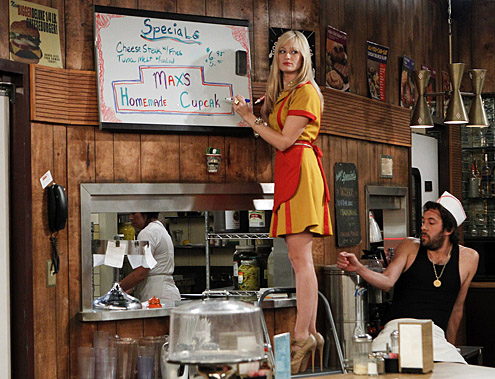 Ultimately, the overarching situation of 2 Broke Girls can be read as two alienated classes united by one ideology—the American Dream—in the aftershocks of the 2008 economic collapse and ongoing recession. Caroline had it all and lost it all. She needs Max to earn it back “the right way” by working her way up from the bottom, not sponging off the capital generated by financial fraud (i.e. Wall Street improprieties, the Bernie Madoff scandal). Max never had it and never thought she could have it, but sees the opportunity to indeed have it all. She needs Caroline to earn it all through goal-driven entrepreneurial enterprise, not through a floundering survival from paycheck to paycheck.5 Rather than disillusionment with the American Dream and expressing a mass resentment of the system (i.e. the recent proliferation of “Occupy” demonstrations), Max embraces the traditional ideological “imaginary” of upward mobility through individual effort and self-determination. 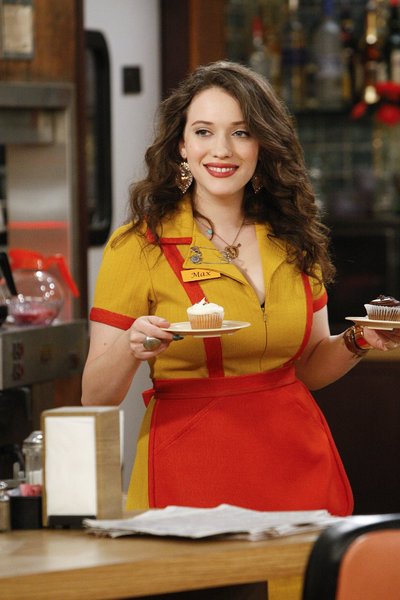 Max sells cupcakes at the diner.

Indeed, the class struggle in 2 Broke Girls is not between the rich and the poor, but is the poor extricating themselves from their lot in life. What Max and Caroline both seek is a way out of the “inhuman existence” of the proletariat and poverty in favor of “the appearance of a human existence” of the bourgeoisie and wealth – or, at the least, middle-class self-sufficiency as small business owners. Sustaining the two broke girls is ideology as their imaginary relation to their real conditions of social existence.