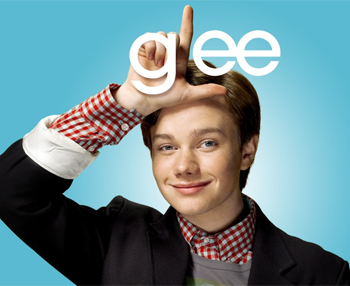 It can be said with reasonable justification that because we are so programmed to be phobic of our own enduring stereotypes, we have become a generation of self-hating homos. Look on any gay dating website and you will see ad nauseum: “I am interested in masculine men” — “masc-only” — “no fems” — “I’m gay – I don’t want to date girls be masc.” These sorts of statements are typically followed by something like, “I am str8 acting …”

Once I read a profile that went so far as to say that the poster was straight, right before listing that he’s a bottom, likes twinks and … well … a few other things I’m too shy to mention in a post my mom will probably read.

I believe this distaste for male flamboyance is what is happening when gay men tell me they hate Glee’s flamboyantly gay character, Kurt Hummel, who can best be summed up by his response to the question, Is that a men’s sweater? (It’s not.) Kurt says, “Fashion has no gender.”1

Although for much of Glee’s first season, Kurt explicitly comes out at least once per episode, the show continues to rely on his clothing, speech, mannerisms, and song choice to code his queerness, a practice of stereotyping bemoaned by gay men, like those above, who think he is an offensive, anachronistic stereotype.

Gay characters in broadcasting have been around since radio’s inception, but because homosexuality was not “sayable” on radio and later television, and programs were strictly prohibited from employing explicitly gay characters, broadcasting appropriated the process of stereotyping to articulate characters’ sexualities. Gayness was, however, still largely omitted or invisible in popular culture, and as such, homosexuality was understood as nothing more than a sick perversion or mental illness. 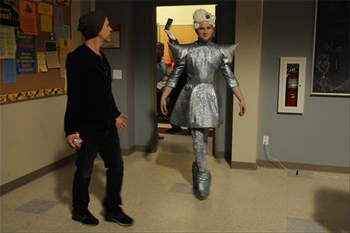 As Richard Dyer explains, “Making gayness visible had to overcome the fact that, apart from actual sexual acts, homosexuality is not something visible.” To overcome this issue, gay advocacy groups such as the Gay Liberation Front (GLF) began and/or cultivated practices of stereotyping in the mass media to respond to, denigrate, or take possession of representation of gayness. Once upon a time there was the practice of “queerspotting” wherein certain elements of a person’s style of dress or mode of speech might “identify” them. “The gay project wanted a more secure visibility, it wanted to make widespread the face, literally, of homosexuality.”2 In achieving that goal, the gay project perpetuated and heightened flamboyant stereotypes.

But even with a record number of explicit representations of queerness on television today, shows continue to rely on these flamboyant tropes. We have reached terminal velocity with regard to using stereotypes for visibility’s sake and are now subject to them in all characterizations. Gayness, and to an even greater extent queerness, has become so conflated with stereotype, that we have subscribed to a new species of performativity — one that must be carried out flawlessly so our sexuality is not indeterminate. In this process, certain acts, mannerisms, or preferences become arbitrarily associated with sexuality.

For example, watching Glee has become a sort of fag flag. In the new TV Land comedy, Happily Divorced, starring once-gay icon Fran Drescher, when Fran’s husband comes out to her after several years of marriage, she says that his love of Glee suddenly makes sense.

While many gay men are likely to devalue flamboyant gay characters like Kurt, they continue to perform their sexuality as socially learned by engaging with texts associated with the gay communities. Additionally, what I also learned while writing this post, is that more straight women were engaging with Glee specifically for its gay representations than gay men. A sort of reiteration of the ‘90s “Slumpy class” phenomenon as described by Ron Becker in which what he called Socially Liberal, Urban-Minded Professionals (SLUMPYs) consumed gay programming as “a convenient way to affirm their open-mindedness.”3

To test my hypothesis, I took a small cursory sample of Glee fans from Facebook and Twitter and asked them to complete a survey about the show. I was more or less vindicated in my theorizations about gay men, but reading the answers straight women gave surprised me, and it was in that moment I realized that perhaps characters like Kurt, and to a greater extent gay media culture, aren’t necessarily targeted toward gay audiences.

The first, mandatory question posed was “How do you identify?” The overwhelming majority, 62 percent, were straight women while gay men accounted for only 18 percent of my sample, showing that perhaps Glee isn’t a “gay-only show.”

When I filter out all but gay men, I find that the most cherished character is actually Santana, a bitchy, sexually confused former cheerleader, who constantly reiterates her discomfort with being labeled.

What’s happening here is that in gay men’s resistance of flamboyant male stereotypes, residual appreciation for flamboyancy is shifted onto powerful, deviant, and often flamboyant women. In addition to a disgust for male flamboyance, gay men sour at how routinely gay characters are subjugated and victimized solely for their sexuality. Kurt serves as a prime example. This is the genesis of the contemporary notion of the gay icon, think Barbra Streisand, Madonna, and now (arguably) Lady Gaga, on which Glee attempts to market itself. It is typical of the gay icon to be bitchy, sexually explicit, sometimes fabulous, and aggressive with straight men. Several indicated that Sue Sylvester was either a close second, or used to be their favorite but is no more.

One respondent elaborated, “As Sue Sylvester’s character has been softened and moved into a more supporting role, the writers have upped the number of zingers Santana delivers and her struggle with queerness has been handled with a lighter touch than Kurt’s before her.”

Though Kurt is not the most hated character (surprisingly that’s Rachel Berry, Glee’s failed attempt at Barbra 2.0), a few respondents said: “he seems inauthentic” “I do not like him,” “he constantly feels like a victim,” “if he were less flamboyant, people would like him more,” and “his relationship seems silly and contrived.” One even said, “He reminds me of a whiny muppet. Way too over the top.”

Having said that, many of these respondents also conceded that his story lines are the ones they most look forward to and that he is a positive step in the right direction. One comment says, “I most like Kurt’s relationship with his father. Though Burt has some growing to do, we finally have a story of a kid who can be loved by his parents — especially their father.”

Conversely, Kurt is the overwhelming favorite for the straight female viewers of the show. “His story is compelling,” “He’s authentic with a sense of humor,” “He is exactly what young gay individuals need,” “I love him so much. No, I’m not gay, but I still feel like I can relate to him. His troubles and the way he handles them affect me so much.”

What many of these statements articulate is that, because Glee is identified as a gay-friendly or gay-associative show, these straight women watch Glee to have their finger on the pulse of gay culture. They regard their own struggles with social norms, and I suspect with internal resistance to the postfeminist landscape (in which they are stripped of agency), as running parallel with Kurt’s and the gay communities’, and as such, they watch Glee in a place of greater political spirit than many of their gay peers. 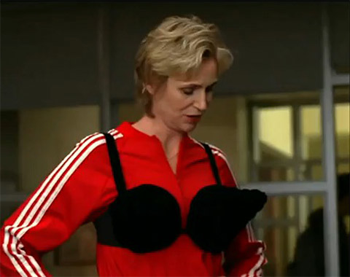 So while the gay men in the survey watched Glee largely for the entertainment value of the show, which has cleverly studied and commodified popular gay icons of the recent past (Rachel Berry as Barbra Streisand, Sue Sylvester as Madonna, etc.) the surveyed straight women preferred to watch Glee and Kurt because they thought he represented a well-intentioned progressive step for young gay audiences, important to them, even though they’re not gay themselves.

A few other comments illustrate this: “It is more effective in showing gay teens that things get better than the recent, well-intentioned ad campaigns.”

“To me, he is a conglomeration of several guys I know/have known over the years. He is flamboyant, but so were they; therefore Kurt is authentic, not a stereotyped clown.”

“His story can really demonstrate what it can be like for gay students in high school and life. Many students do not get to see that. Especially in small towns where it may not be completely OK yet to come out when you are so young. The more people are exposed to something, the less they fear it.” A case for visibility — quantity over quality.

Vocalizing hate for Kurt is a way for gay viewers to continue to engage with Glee as a gay text, while not subscribing to the media’s continued use of stereotype. Aware of this resistance, Glee creators this season shuffled in two new gay characters, a closeted gay bully, Dave Karofsky, and Kurt’s new, more masculine love interest, Blaine. Those surveyed were indifferent to both, with a few comments stating disbelief in the characters’ interest in Kurt as the cause.  However, Glee’s continued marketing as a gay text has fostered its popularity among straight women allies, eager to associate themselves with gay culture through the “fag hag” stereotype, and all of whom love Darren Criss’ Blaine.

Meanwhile, gay resistance to these gay stereotypes has interestingly created a new breed of stereotype, “the bad gay,” seen by many as a badge of pride for the Respectable New Homosexual. Both of these role rewrites are expertly demonstrated by the hilarious YouTube series Disappointing Gay Best Friend.