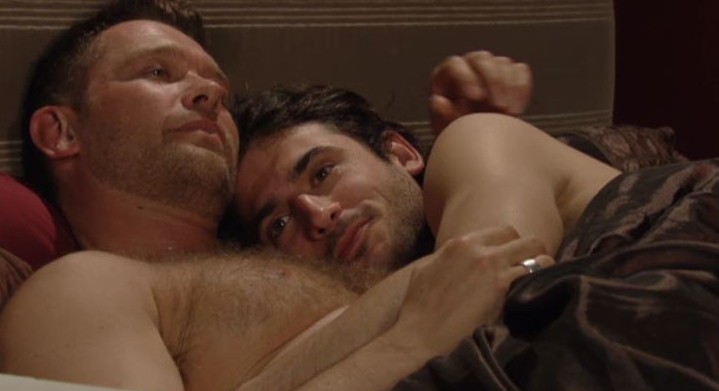 This week something happened that caught my attention. This was something that hadn’t seemed to have happened in the UK for a while, complaints about gay representation. The reason for this was the appearance of two gay men in bed together in the top BBC soap opera EastEnders. There were 125 complaints to the BBC over the scene, many claiming it would ‘confuse’ children at the UK pre-watershed time of 7.30pm; in the UK 125 complaints is noteworthy in regulatory terms.

The scene in question showed two gay male characters (Christian Clarke and Syed Massood) in bed together – naked from the waist up. The scene was certainly intimate but not sexual. The characters are actually long-term partners and were shown in each other’s arms in an intimate embrace. This is a couple who are planning their civil partnership and attempting to adopt a child. By any standards this storyline escapes the sexual ‘predatory gay’ discourse of yesteryear. But, the complaints certainly raise some questions about the nature of what intimacy between gay couples means to some UK audiences, especially when shown during primetime.

Whilst the characters involved in EastEnders are involved in a long term relationship – it seems that some of the national audience are still unforgiving when a scene more than hints that they may have had sex within the last hour, are close, committed and intimate. Why is this?

Is the playing field actually ‘straight’ when it comes to representing sexual preference, act, and commitment pre-watershed in the UK?

Syed and Christian Inquire About Adoption

EastEnders appears to have overstepped the boundary of the non sexual gay man. Such characters as ‘Will’ and ‘Jack’ in Will & Grace are the predominant examples of such a non sexual discourse, hinting at their sexuality and sexual acts whilst virtually never actually realising this as part of the narrative. Gay sexuality has been increasingly represented in UK television soap opera since the 1980s and has informed a number of similarly stereotypical and oft seen character types and narratives. These characters can be sexual, but only if for the most part ‘they’ are single and any intimate act, visit to a gay area, or interaction with a wider group of gay people takes place off screen. This further highlights what appears to be a problematic issue with the particular construction of gayness on EastEnders; it can be considered ideologically rare and hegemonically challenging. I believe that these gay characters just weren’t enough of an ‘other’ in lifestyle terms for a number of reasons.

The unspoken pre-watershed ideological rules seem to be that gays are never to have sex or even hint at it; it’s a closeted issue. It is certainly suggestible that the major issue with the discourse present in EastEnders is that it is too close to the hetero-normative lifestyle. In turn it is possible to posit that the ideology of the gay lifestyle for some of the straight audience may not include romance, commitment, monogamous sex, a long term future or a family – all factors which are part of the current narrative between Christian and Massood.

This appears to be in opposition to the most visible, typified and overtly sexualised representations (post-watershed) such as Queer as Folk and Lip Service which have been shown with little complaint, albeit to much smaller audience than EastEnders commands. It appears that whilst gay culture and lifestyle can be represented diversely in what is labelled ‘gay drama’ this doesn’t seem to reach primetime soap. It seems that through scheduling and commissioning diverse representations of the gay lifestyle have only appeared when distinctly labelled as the ‘other’, and for the complaining 125 and others upset by EastEnders this has potentially become an acceptable norm. 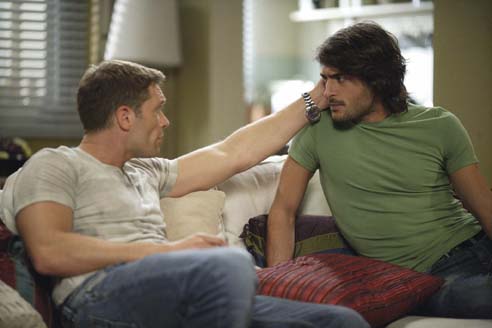 Arguably this problem has occurred because the construction of reality in EastEnders is one where gay characters live, breathe, socialise, shop, fall in love, drink and die alongside the group the majority of the audience can relate to in terms of believability, credibility and verisimilitude, and this is hugely challenging in terms of dominant discourse. This isn’t a dramatic visit to the gay quarter of Manchester (Queer as Folk UK) or an insight into the lifestyle, relationships of and sexual acts of lesbians in Glasgow (Lip Service). Instead EastEnders is reminiscent of the audience’s own contextualisation of reality: their front door step, street, pub, bar, nightclub and community. This particular representation wasn’t ‘tailored’ for the heterosexual audience as the stereotypical ‘gay culture’ and neither did it encourage the non-sexual stereotype seen famously in Will & Grace. Perhaps Richard Dyer encapsulates this issue best when he states, ‘a major fact about being gay is that it doesn’t show…the person’s person alone does not show that he or she is gay,’ and whilst it was quite clear from the scene these characters were gay Dyer’s point is relevant because their actions, their interaction, and the narrative surrounding them was not.1 Arguably this settled gay relationship and the narrative context was a little too close to home to the normalised discourse of heterosexual society for some people to deal with. 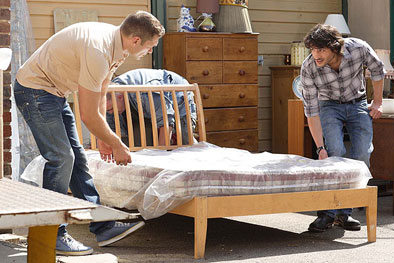 Christian and Syed Making Their Bed

In all this the BBC are to be commended, and I will let them have the final word of this column via their response to the complainants. Perhaps in the not too distant future more broadcasters will take the same stance and develop more rounded and diverse representations of gay relationships for screening pre-watershed and on prime time television. Hopefully this challenge to the norm will not seem as shocking to some in the long term future:

“EastEnders aims to reflect real life, and this means including and telling stories about characters from many different backgrounds, faiths, religions and sexualities.

We would also point out that same-sex civil partnerships became law in December 2005, giving equal rights to gay couples in the UK. The BBC cannot discriminate by treating gay characters differently to heterosexual characters.”2