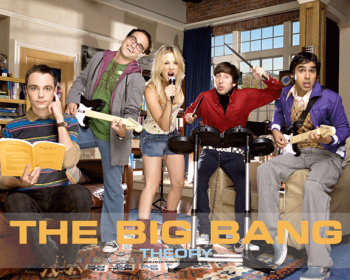 The Big Bang Theory on CBS.

Intelligence is gendered masculine, and in popular thinking intelligent people often are male. Television representations of intelligence reinforce this gendering, and they reduce these intelligent characters to traits such as possessing multiple degrees, spouting obscure facts, pursuing scientific interests, announcing their intellect, highlighting their photographic memories, overusing logic, avoiding empathy, and overall acting socially awkward. Other characters affirm their intelligence through observations, admiration, and other comments. The CBS sitcom The Big Bang Theory features both male and female characters who exhibit high intelligence and scientific accomplishment, which suggests the possibility for challenging these gendered constructions. Two minor characters — Dr. Beverly Hofstadter and Dr. Elizabeth Plimpton — demonstrate the extremes in these constructions, and their representations raise some further questions about gender, intelligence, and sexuality. 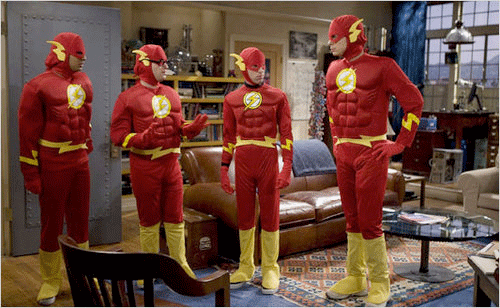 Raj, Leonard, Howard, and Sheldon bond over their love of superheroes and dressing up in their costumes.

Created by Chuck Lorre and Bill Prady, The Big Bang Theory features four highly intelligent men whose interactions with each other, their friend Penny, and the real world make for the hilarious and awkward moments that drive the series. Dr. Sheldon Cooper, Howard Wolowitz, Dr. Rajesh Koothrappali, and Dr. Leonard Hofstadter all work at the California Institute of Technology, and they bond over traditionally masculine undertakings of comic books, superheroes, video games, science fiction shows, and science and technology experiments. While some parts of the show’s humor derive from these four’s interactions, other parts of the show’s humor come from their interactions with the world outside that circle. A few women become part of the regular cast, and many of them exhibit high intelligence and academic accomplishments, including Bernadette Rostenkowski, a Ph.D. in microbiology; Amy Farrah Fowler, a Ph.D. in neuroscience; and Rajesh’s sister Priya, a J.D. holder. The neighbor across the hall, Penny possesses a different set of smarts — street smarts about everyday people, alcohol, and popular culture. 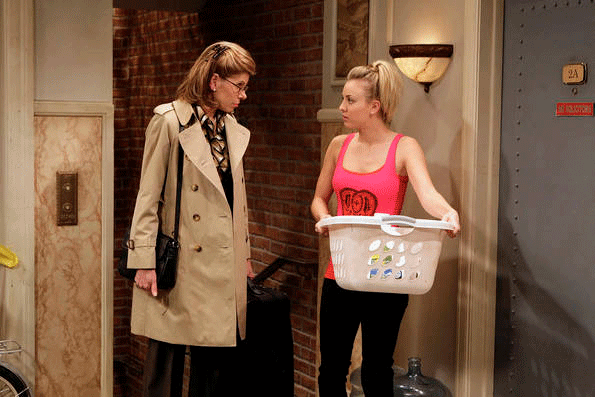 Through their extremes, two minor characters raise questions about the intersections of gender, intelligence, and sexuality, and they provide a contrast to the other female characters on the show. The first is Dr. Beverly Hofstadter, Leonard’s mother, who appears in “The Maternal Capacitance” from season two and “The Maternal Congruence” from season three. Beverly holds degrees in psychiatry and neuroscience. She wears business suits in muted colors and glasses, and she wears her hair in a demure style. She makes analytical statements, exhibits emotional detachment, and shows sexual repression. She speaks in a clinical way. In “The Maternal Congruence,” for example, she casually tells Leonard about her carpal tunnel surgery, her divorcing Leonard’s father, and their dog dying, yet she fails to comprehend why Leonard gets so upset about these pieces of news. She says, “Excuse me, Leonard, I am the one getting a divorce, Mitzy [the dog] is the one who is dead, why are you the one making a fuss?” Her detachment from the emotions and from her son shows her inability to connect with others on those levels. Penny later asks her, “You’re not upset that your marriage is over?” Beverly replies, “Well, initially I felt something akin to grief and perhaps anger, but that’s the natural reaction of the limbic system to being betrayed by a loathsome son of a bitch.” Her connection of those emotions to the body’s processes again suggests critical distance. This response sets up her next bombshell: That she had not had “intercourse” with her husband for eight years. She further reveals that she and her husband had sex only for the purposes of procreation, and both of them wrote papers about the experience. 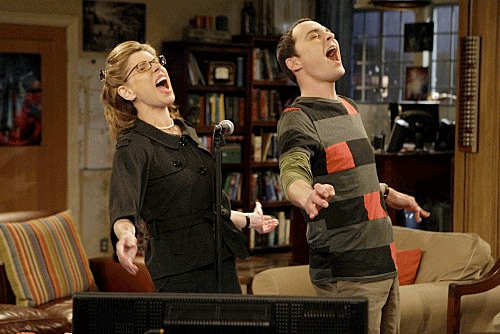 Dr. Beverly Hofstadter and Sheldon Cooper “cut loose” by singing Journey’s “Any Way You Want It.”

Despite these analytical statements, the emotional detachment, and the sexual repression, Beverly still “lets go” a bit. In “The Maternal Capacitance,” she finds herself comfortable with Sheldon to sing Journey’s “Any Way You Want It” along with a video game system. In “The Maternal Congruence” her inspiration for “letting go” is a more traditional one: alcohol. As Beverly learns the art of drinking shots from Penny, she maintains her critical distance but begins to desire sex. After her second shot, Beverly observes, “I am noticing an immediate lowering of my inhibitions. For example, I am seriously considering asking that busboy to ravish me in the alleyway while I eat cheesecake.” After she and Penny return to the apartment, Beverly also kisses Sheldon. These moments of “letting go” provide some humor in both episodes, but in the end Beverly returns to her previous self.

“The Plimpton Stimulation” introduces Dr. Elizabeth Plimpton, a cosmological physicist visiting from Princeton University. She has written two books and published several articles, and she is a leading expert in her field. Sheldon and Leonard admire her work, and Sheldon invites her to stay as a guest in their apartment.

Elizabeth appears almost the opposite of Beverly, particularly in terms of sexual repression. Instead of a business professional look, Elizabeth wears her long, red hair down, and she wears bright-colored clothing, with a yellow skirt and a red, magenta, black, and camel sweater. After Sheldon goes to bed, Elizabeth enters Leonard’s bedroom and tells him, “I wrote the section on the Wilson-Bappu Effect completely naked.” (Maybe science is an ecstatic experience.) She explains, “When we consider the brightness of pulsating variable stars, we start to see a possible explanation for some of the discrepancies found in Hubble’s constant” as she removes her bathrobe and reveals that she wears nothing underneath. She ultimately sleeps with Leonard.

In another scene Howard and later Leonard go to Raj’s apartment for their regularly scheduled Halo night. Elizabeth is there, and she sets up a role-playing situation for them: “You [Howard] are a deliveryman. You’ve brought soup but, uh-oh, Raj and I don’t have enough money to pay you. So we’ll have to come to some other kind of arrangement.” Elizabeth revises the scenario when Leonard arrives: “What’s going on is you and Howard are my moving men, and Raj is my new landlord. And I don’t have enough money to pay any of you.” Leonard and Howard step outside, and Raj locks them out, turns, and asks her, “So you say you can’t pay your rent?” Elizabeth places her fingers on her lips and shakes her head “no” while looking up at him in a seductive way. 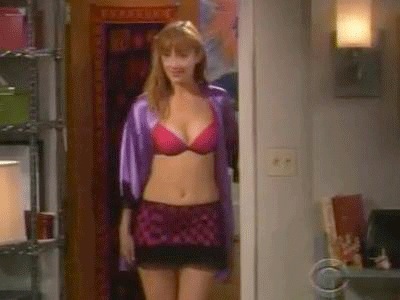 On one level these women challenge the masculine nature of intelligence. Both Beverly and Elizabeth are accomplished science professionals. Both demonstrate some of the intelligent stereotypes, and both receive affirmation of their intelligence. But as much as these women possess high achievements in typically masculine fields, Elizabeth and Beverly represent opposites in sexuality. While Beverly represents the emotionally detached and sexually repressed scientist, Elizabeth represents a pleasure oriented, but even more sexually motivated, scientist. These two could be seen as paralleling the binary of virgins and whores that can define women’s representations in visual media, though a closer reading shows some nuances in sexual openness and age. While Elizabeth asserts her sexual availability, Beverly possesses the potential, particularly after drinking alcohol. While Beverly’s repression could be part of her middle age, Elizabeth’s openness could be considered part of the generational post-feminist reclamation of sexual identity as a form of empowerment. Ultimately, Beverly gets rejected by her husband for her sexual repression, but Elizabeth gains at least temporary acceptance from both Leonard and Raj.

So while these women can work and be accomplished in masculine fields, their sexuality becomes a representation of the extremes with no middle ground, which becomes fodder for the humor in these episodes. Comedy provides a release for cultural tensions, and The Big Bang Theory exploits these extremes of gender, intelligence, and sexuality through Elizabeth and Beverly. Few comedies, though, advocate for acceptance or understanding of these extremes. Instead, they show us these extremes in order to mock them, elicit some laughs, and reinforce gendered norms.