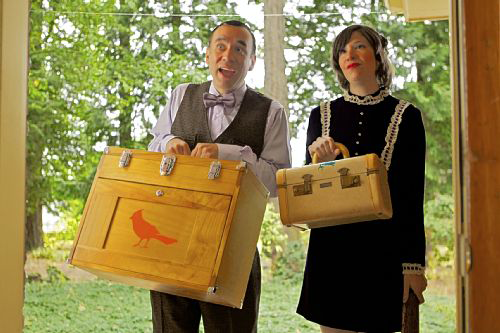 Over the last 10 years, the cultural field in the U.S. has been inundated with messages about sustainability, spurred along materially by everything from climate change to peak oil. Silent Spring hit bookstores a long time ago, bit it seems as though sustained criticism of overconsumption has finally stuck. As a consequence, mass manufacturers and marketers have incorporated such critiques by offering an ever-expanding archive of products, services, and messages that tout sustainability while keeping their parent companies’ unsustainable structure and practices in tact. Sold at a premium, “green” products and services arrive to the mass market within the discourse of luxury, which satisfies bottom lines of producers and taste culture aspirations of consumers, rather than a discourse of justice, which requires significant change at the level of production and consumption.

While general market consumers choose between the status-quo and status-quo-perpetuating “environmentalism,” a vibrant independent craft culture provides choices for those interested in participating in the economy within a logic of justice. Craft collectives and community-supported agriculture (CSAs) can stand as sustainable, local alternatives to petroleum-fueled big-box stores and supermarkets. But a seductive critique follows these efforts, perhaps because they stand self-consciously outside the choices presented by the general market. They are tagged as elitist. The food-justice movement is often surrounded by this controversy, which Jay Porter, owner of the San Diego farm-to-table restaurant The Linkery, calls “fauxlitism.”

Nicolette Hahn Nibam, a farmer in Bolinas, writes in the Los Angeles Times,

The controversy is often framed by agribusiness and food companies, heavily invested in maintaining the status quo, claiming that a globalized, industrialized system is the only way to produce enough food to feed the world’s growing population, and to do so affordably. Reform advocates working to transform the system to one that’s more locally based and isn’t dependent on chemicals, mechanization and cheap fossil fuels are pitted against the world’s poor, working class and hungry.

Enter Portlandia. The IFC limited-run series starring Fred Armisen and Carrie Brownstein satirizes the independent culture sustainable living that Portland is best known for outside the city limits, and perhaps most self-conscious about within. Armisen and Brownstein play a variety of recurring characters who satirize everything from independent feminist bookstores to dumpster diving freegans. The series has just begun, but IFC produced several vignettes that introduced the series on its website and made the rounds on social networking video-sharing sites. One features Peter and Nance ordering food at a farm-to-table establishment, and through persistent questions to their server, we find out the chicken’s name was Colin.

As someone who cares about where my food comes from, I got a good laugh out of the clip, perhaps because I recognized myself in the exaggeration. In a Salon review, Matt Zoller Seitz raises a question that lies at the heart of the program: “can the 21st century, granola-crunching, organic-farm-supporting, ‘Daily Show’-quoting, early-technology-adopting, bike-lane-promoting American left laugh at itself?” Judging from the early buzz surrounding the show, the answer seems to be “yes.” Certainly satire can be judged on humor, but the send-up altruistic antics on Portlandia constitute a form of cultural critique. In this way, we might best understand Portlandia’s audience along the axis of insider/outsider. For some Portlanders and Americans across the country who belong to CSAs, bike to work, spend hours in feminist bookstores, the charm of the show lies in familiarity and the exaggerations point to something that might be recognizable, if not real. For outsiders, there might also be a familiarity, but it could be read in a way that mirrors the fauxlitist critique of a justice-oriented economy and culture. Portlandia supports already-held stereotypes about participants in discourses of justice, further pushing sustainable practices further out toward the fringes of acceptable economic behavior.

What limits this possibility, in my reading of these vignettes, is the sense of hope that comes through the mockery. Brownstein, formerly of the well-regarded band Sleater-Kinney, lives in Portland and testifies to loving the city in the IFC web features. Furthermore, Portland becomes a container for the lost ideals of well-meaning Americans of a certain age who dashed their circus dreams for gainful employment. The show’s opening musical number situates Portlandia in both time and space by describing it as such a place, a city “where young people go to retire.”

Here, Portland embodies the vapid slackerism as well as the youthful idealism of Generation X, who lost their emancipatory moment to a commoditization of independent music and the career-building dot-com boom. As a member of that age group, I always imagined that the dream of the 90s was alive in graduate school. But as Portlandia shows us, the dream is alive and well in Portland and in cities and towns across the country where spaces are made for do-gooder cultural practice. Perhaps nostalgia is settling in for this reader, but the hope and possibility infused in this clip makes it difficult to read the show as an indictment of justice. If anything, it argues that a life un-satirized may not be worth living.