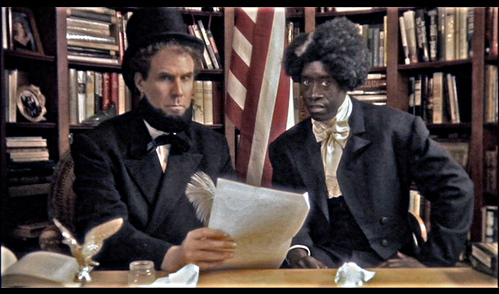 Abraham Lincoln and Frederick Douglass through a drunk lens

Starting as a web phenomena, making it onto HBO’s Funny or Die Presents and winning the 2010 Jury Prize for Short Film at the Sundance Film Festival, Derek Waters’ and John Konner’s Drunk History highlights the drama of American history, the convergence and transfer between media in our modern age and the hilarious potential of vocal displacement and incongruity. With six episodes to date, Drunk History consists of a drunk individual telling the story of an historical event that is intercut with filmed re-enactments with major actors and actresses (such as Will Ferrell, Don Cheadle, John C. Reilly, Paul Schneider, Jack Black, Michael Cera, Crispin Glover and Zooey Deschanel) playing the key roles. Filmed after the telling of the event, these historical segments visually recreate the story with actors lip-synching the drunk narrator’s voice. Because this voice is always a drunken one, it frequently slurs, makes mistakes, hiccups and even vomits. It is this contradiction and displacement that renders the short videos so funny and effective. Combining serious history with drunken ramblings, relatively glossy historical re-enactments with low budget interview style cinematography and vocal presence with lip-synched artifice, each episode plays with the central trope of historical re-enactment as a mode of story telling. In this combination of live telling and re-enactment, the videos stress the way that one’s current state of being (drunk, contemporary American) shapes the interpretation and telling of historical events of the past. The teller literally calls the action into being as the historical figures become puppets re-enacting what the narrator describes. This force of the present on the past is most obvious in those moments where the narrator makes mistakes, such as when Jen Kirkman refers to Richard Dreyfuss instead of Frederick Douglass, Bush instead of Washington and Clinton instead of Lincoln.

As one would expect, the historical commentaries of Drunk History are frequently hilarious because of the mode and nature of their telling and the incongruities this suggests: use of profanity and slang; meandering or fractured narration; interference of non-linguistic noises made by the teller (sniffs, hiccups, gagging and heaving). Rendering strange the relationship between visible body and vocality, the ventriloquist voice of the drunk teller is foregrounded as it replaces the known and expected voice of the star, transforms the historical voice into contemporary slang and diction and, as in the episodes narrated by Jen Kirkman, thwarts divisions of gender. It is also noteworthy that in every episode the narrator’s voice appears to be unaware of the re-enacted life it is animating, even though the actors within the stories respond to their own narration in reflexive and interactive ways (pausing during a stutter or looking at the camera quizzically when a mistake is made, for instance). This split between the narrator and the re-enactment reworks any notion of the actors as puppets or ventriloquist dummies: their animation is an afterthought rather than an intended outcome of the narration itself.

This last point is important in considering the appeal of Drunk History. It is not only that viewers enjoy the comedic potentialities made available through witnessing the drunkenness of others, but also that the divide between an inebriated lack of self-awareness and the seriousness and purposefulness of historical narration provides an interesting paradox. In fact, Waters has commented on the importance of the process in creating these short videos: the subjects must be quite drunk and must be allowed to tell the story several times before anything can be filmed. This practice works to help the narrators make the story their own and invest themselves in the telling of it, but more importantly it gives them space to work through the inevitable performativity that comes with being filmed. As Waters notes, he needs to let them get over trying to be funny so that they can tell the story with the appropriate level of unselfconsciousness that is necessary for the effective re-enactment.

The voice of the narrator occupies a different visual and narrational space than the actors and this displacement is an essential part of the acoustic humor in each of the episodes: the actors in the re-enactments play them straight as historical drama, complete with costuming, sepia tones and appropriate musical accompaniment, while they also reveal their awareness of the drunken historian as narrating force and make explicit their own star identities (recognizable actors in bad wigs or bald caps, for example). But more basic than this is the appeal of the displaced voice itself. As psychoanalysts, film scholars and sound theorists have noted, there is an uncanny split between the body and the voice that becomes even more extreme when that voice is recorded and manipulated. As Lacan, Dolar, Chion and Zizek have all noted, the most mundane example of this is the disturbing phenomena of listening to our own voice recorded, as on a telephone answering machine, for example. Whether used for horrific or comedic impact, the voice that does not belong or seems out of place in the visible body is a frequent trope in film and television. From the out of synch comedy of “The Dueling Cavalier” in Singin’ in the Rain to The Exorcist to the Look Who’s Talking franchise, the uncomfortable relationship between voices and bodies is clearly a central and enduring motif and it is one that Drunk History has used expertly to achieve its transmedial success.