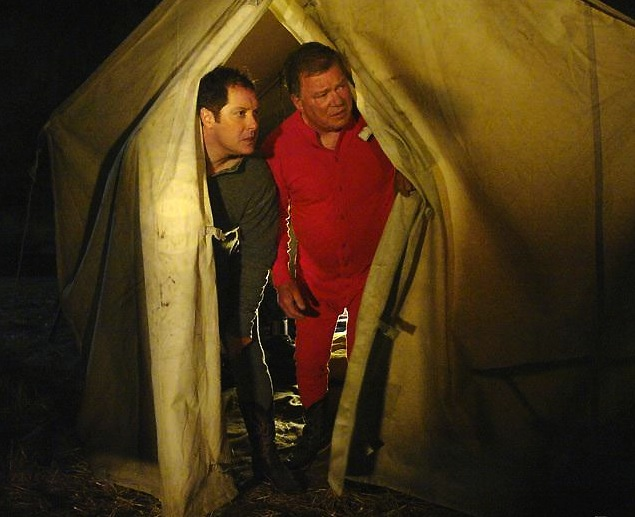 The television show, Boston Legal (David E. Kelley, 2004-2008) is unusual to say the least. While holding a wooden cigarette, a lawyer sporadically pops, purrs, and stomps as he argues cases, another attorney frequently passes gas and allegedly suffers from Mad Cow disease (i.e., Alzheimer’s), the camera constantly fetishizes hands and favors staccato-like zooms, and characters regularly break the fourth wall as they reference Boston Legal’s own time slot on ABC.1 But perhaps the most atypical feature of the primetime courtroom drama/comedy is its persistent exploration of homosociality as seen through the physically and verbally demonstrative friendship of gregarious lawyer Alan Shore (James Spader) and eccentric attorney Denny Crane (William Shatner).

Unlike most heterosexual male friendships depicted onscreen, Alan and Denny hold hands, openly affirm their love for each other, and sleep over at one another’s house, at times in the same bed. At one point, Denny even forgoes marriage with a sassy cattle-driver (Christine Ebersole) because he cannot fathom moving to a ranch in Montana without Alan (4.18). While the two male attorneys share this unconventional bond, they are also portrayed — like most onscreen “bromantic” couples — as undeniably, perhaps exaggeratedly, heterosexual. For instance, both Alan and Denny successfully bed and overtly objectify women, fixate on their penises, and boast about their illustrious standings in the courtroom. Also representing conventional machismo, Denny carries guns, some loaded with bullets and others with paint balls; nonetheless, he fires both at people and is usually victorious in his aim. Moreover, at the end of virtually every one of Boston Legal’s 100 episodes, Alan and Denny congregate on the balcony of Denny’s office at the law firm of Crane, Poole, and Schmidt to smoke cigars, drink scotch, and discuss their day. This recurring scene is arguably the most intriguing of the show as it is here, amidst noticeably phallic cigars and sometimes the discussion of women, that most of the couple’s uninhibited and multifaceted affection for each other is displayed. See clip below.

There are several reasons to single out Boston Legal among the television shows and films currently (or recently) showcasing homosociality. First, unlike virtually all of the other existing representations of strong male-male relationships (e.g., How I Met Your Mother, Scrubs, Wedding Crashers, Superbad, Role Models), Boston Legal is not purely comedic. As a result, it offers a seriousness and sincerity in tone that other onscreen bromances do not — or, arguably, cannot because industry executives fear losing their (white, heterosexual male) audiences. Second, where most contemporary representations of homosociality are limited to teenage boys and young men in their twenties and early thirties, Boston Legal’s Alan and Denny are roughly 50 and 70. Consequently, the aspirations and everyday dilemmas of the two differ drastically from those of their younger counterparts. Third, virtually no other fictional network characters communicate their friendship more articulately or regularly than Alan and Denny. In fact, I would argue alongside Entertainment Weekly that these two are “the most affectionate straight men on TV [and/or film]”2

Here’s where the problem lies though. To begin with, it’s difficult to situate Alan and Denny’s friendship in this growing list of relatively juvenile sitcoms and superficial animal comedies. Yes, Boston Legal— which the creator once called “One Flew Over the Cuckoo’s Nest set in a law firm” — features inane moments (e.g., Denny and Alan donning flamingo costumes, engaging in paintball fights, being tied together in bed, joining the Coast Guard, etc.). But the authenticity and gravitas of Alan’s and Denny’s relationship — which significantly, is the very last image the viewer sees every week in the balcony scenes — often supersedes the sight gags and outlandish behavior.

Also problematic, it’s hard to deconstruct the show’s male bond based on the sociological reasons that the bromance has apparently reemerged with such force: financial pressures (i.e., roommates are a more sensible option in this economy), the delay of marriage to age 27 (premarital sex and cohabitation are more accepted), an increase in higher education, and a rise in public displays of male affection/emotion.3 After all, with the exception of the fourth reason, none of these things really applies to a late-in-life bromance such as Alan’s and Denny’s.

Finally, it’s difficult to situate Boston Legal alongside Scrubs, Old School, Superbad, and Role Models, for example, because its bromance doesn’t necessarily fit the theoretical reasons that the bromance has resurfaced: (a) the heterosexual male’s supposed anxiety about society’s growing acceptance of homosexuality, and (b) his reservations about progressive women and their sexuality. An unapologetically liberal show, Boston Legal, unlike Judd Apatow’s films and the like, largely refrains from “gay jokes” and homophobic comments. And if such words are uttered (usually by staunch Republican, Denny Crane), they are shot down almost immediately by Alan or the other characters on the show. Regarding women in bromances, according to Joseph Aisenberg, they represent an unknowable threat to the men’s group cohesion”; this is why we often see in these films/shows, “screeching bitches, bosomy sluts, oversexed grandmas, or self-obsessed professionals.”4 But again, like the other conventions and explanations cited above, this does not necessarily hold true throughout Boston Legal. In fact, one of the biggest threats to Alan’s and Denny’s relationship was not a woman but another male partner in the law firm (see clip below).

In his autobiography, William Shatner writes that this was “the most intense balcony scene” in the show’s five seasons. “It was a very fragile moment,” Shatner recalls. “I had to express the emotions of a woman who had caught the man she loved cheating on her—but in a very nonsexual way. If I went too far it became broad comedy; if I was too intense it became anger rather than hurt.” Finally, he remembers, “When people talk to me about Boston Legal, this is the [episode] they often cite. More than any other moment, this is the balcony scene that most accurately describes their relationship.”5 This is an understandable reaction as these are themes that consistently define Alan and Denny: they cherish time together, express their love easily and openly, acknowledge jealousy and fidelity as a factor in their bond, and remind us that what they have (which most onscreen men don’t or are afraid to) is irreplaceable. And this is why, for loyal Boston Legal viewers, it wasn’t much of a surprise when the two married in the series finale.

So what does this mean? Where does (or did) Boston Legal fit among this wave of bromances? Or can it? Some critics don’t think it can; they maintain, for example, “None of [the other bromances] hold a candle to the boys of Boston Legal.”6 I agree; this one is seemingly in a league of its own, especially when we consider the show’s messages about male-male relationships. That is, age, admiration, and unconditional love produce an intimate, extraordinary friendship in which homophobic jokes and bitchy women play little part. As well, the show ultimately suggests, unlike The Hangover or I Love You, Man, that marriage may satisfy several emotions and purposes: sexual and romantic (Candice Bergen’s Shirley and John Larroquette’s Carl marry alongside Denny and Alan), but also spiritual, financial, and medical. Viewers will notice, for instance (in the above clip), that affection is considered first in Denny’s proposal: “Take my hand,” he offers, then “Take my money.” Indeed, these messages are a far cry from the immature ones featured in Pineapple Express and Forgetting Sarah Marshall — onscreen representations of homosociality that merely mask underlying and unfounded anxieties about sex, sexuality, and ultimately, humanity.