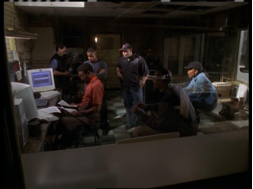 The Wire: The epitome of quality TV

At the recent Flow TV conference this year, a recurrent thread was what gets used as shorthand to represent “quality television” versus its opposite. The Wire (HBO, 2002-2008) was identified as a favorite amongst media scholars for both consumption and critical analysis, a text that is held up in contrast to middlebrow material like CSI and NCIS, both CBS procedural stalwarts that – it goes without saying – fail to fulfill the narrative, formal, social, or political potential of the medium. This spoke directly to something I have been grappling with for a while, namely, the often covert ways in which scholars of popular media and culture construct our own status systems, not just when we present at conferences or publish papers, but wherever and whenever we are being professionalized.

“‘Taste classifies, and it classifies the classifier,’ French sociologist Pierre Bourdieu noted famously.1 But how reflexive are we, exactly, as scholars? In a field where we produce certain taste hierarchies even as we critique others, can we ever get off the merry-go-round of the struggle for distinction?”

We find part of the answer if we look at changes in the position of popular fandom within the academy (as well as the industry). The earlier work of Henry Jenkins and other scholars of fan cultures2 discussed the derided status and often parodied identities of media fans, and hence an unsurprising, almost necessary defensiveness about researching media fandoms of which one was also a member. There has of course been something of a sea change in the last decade, with fan studies establishing itself more solidly in the scholarship of media and popular culture, and industrial producers eager to encourage and cultivate “participatory,” “immersive” media use. In tandem with these developments, the aca-fan has also become a rather more familiar, less diffident figure in our field, so much so that it is timely to consider some of its more troubling paradoxes.

CSI: TV for the “masses”

I certainly count myself amongst the ranks of aca-fandom; I remember coming to Communication as a viewer primarily invested in television, in the cultishly popular shows of Buffy, Xena, and The X-Files rather than film and its prestigious array of auteurs and theories. I hoped for an environment where many of us would chart out common ground through our attachment to media texts, and I did find that to some degree. What I did not anticipate was that claims to recognition would nevertheless be made through routine academic practices in a milieu where overt displays of status are both discouraged and disavowed.

That milieu has been, and continues to be, shaped by (critical) cultural studies. Since cultural studies has a direct lineage from neo-Marxist theory – in particular through Antonio Gramsci and moves away from the mass-media-averse Frankfurt School – critiques of hierarchy are constitutive of its theoretical assumptions and research frameworks. Although the earlier work of Stuart Hall and his colleagues may have more explicitly pointed to structural apparatuses of social power,3 subsequent analyses in cultural studies have continued to deal centrally with race/class/gender/nation. In other words, the analysis of cultural agents, practices, and texts in media studies draws crucially from feminist, postcolonial, queer, and sociological theory that critically attends to how power manifests.

As scholars, we are, however, ourselves embedded in a field of cultural production with its own rules and stakes. We don’t, of course, make overt claims to status through wealth or political position, racial or gender identities; that much is consonant with what we profess. Rather, the space of competition for status exists in the domain of taste and its (usually) less blatant hierarchies. Bourdieu drew on a rich and complex set of empirical data to plot out the correlations between social position and aesthetic preferences; for example, appreciation for conventionally unappealing objects (an old woman’s hands) was more likely to be expressed by those with higher than lower cultural capital. Cultural capital, in turn, derives not from innate aesthetic talents (“good taste”), he argued, but is tied to a person’s economic capital through a rather predictable – if not completely straightforward – set of relations.

Building on Bourdieu and delineating a more complex picture that I better recognize, sociologists Richard Peterson and Peter Kern argue that in contemporary American contexts, those with high cultural capital are often “cultural omnivores”: embracing the texts of low as well as high culture.4 They – that is, we as scholars, and scholars of popular media to bat – can afford to admit watching American Idol because we also know how to dissect the movies of David Lynch, or (better yet) the latest Iranian directors. In fact, revealing our viewership of some popular reality show simultaneously displays knowledge that – yes, of course – mainstream commentators deplore the program, and signals our intellectual engagement with the text … thus distinguishing us from an audience imagined by those mainstream critics to be shallow, stupid, and so on. Does this sound kind of familiar, fellow scholars? 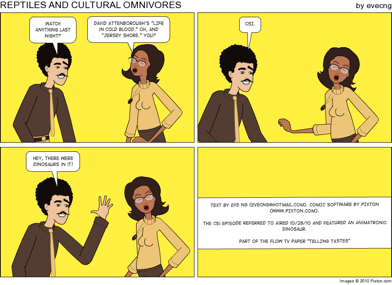 By my observation, this sort of unacknowledged struggle for symbolic capital also goes beyond media, applicable whenever other people’s taste assessments of particular popular objects are being discussed. For then, whether or not we explicitly identify our own assessment, we can position ourselves in relation to taste as well as knowledge hierarchies; if I note that clothing from The Gap is no longer considered cool amongst teenagers, I signal both that I am familiar with what is considered cool and that I am able to assess the situation from an “outside” perspective (whether or not I am “inside” it). As cultural studies scholars, then, we may negotiate our positioning in the matrices of distinction by expressing what Janice Radway called a “divided subject” in her study of romance novel readers,5 able to claim both the (sub)cultural capital of familiarity with the popular and the symbolic capital of an academic’s ability to critically analyze those forms.

Let me ask again: do you recognize yourself here? I have myself no doubt done all of what I described above; I have certainly witnessed these practices in the “casual” exchanges during break time for graduate classes, at conferences (of course), in a hundred coffee shop conversations of a college town. All of it has been part of my induction into the academic culture of critical media studies, as much as when I first read “Encoding/Decoding.” 6 The fact that I can now demonstrate what Bourdieu called an “aesthetic disposition” – a distanced, dispassionate posture when considering, in my case, texts and their consumption – the fact that the earnest fan I was when I first arrived to the field is no more, is probably the only expected outcome of my professionalization. Still, for me, there’s the rub that the comfort with which we display our affinity for popular culture comprises a mark of distinction that we do not often enough acknowledge as such. That is, what we study and how we learn to talk about it is productive of our identities along mostly covert dimensions of power, playing out within spaces where we are supposed to be critiquing hierarchies, not (re)producing them.

Perhaps the articulation of our tastes in ways that generate distinction is an unavoidable constituent of an academic field like ours. Or perhaps there are other possibilities and realities of academic identity production that better circumvent what I’ve outlined; if so, this enquiring mind, at least, very much wants to know. For now, somehow Carrie Bradshaw’s voice has morphed into the rich smooth tones of Gossip Girl (which I can, of course, admit to watching because I have also cited Bourdieu):

“The gates are about to close for yet another day at the carnival of popular cultural studies. As for that merry-go-round, it seems it never stops spinning; maybe all that the fairgoers can do is look up from their painted horses and wave at each other, finally acknowledging that we’re all on the same ride.”