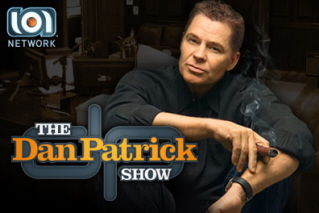 Simulcasting has long been a part of the developing histories of media platforms, including both radio and television.1 Among the earliest TV experiments is simulcasting existing radio content over TV airwaves.2 However, there is something novel about the simulcasting of the syndicated sports talk show, the Dan Patrick Show in all of its various mediated forms. The Dan Patrick’s Show, which has existed in various incarnations since 1999, is now delivered primarily on a dedicated DirecTV station (“the 101”) and simulcast on numerous terrestrial and satellite radio stations. Patrick’s content is also part of the Sports Illustrated and CNN networks, all under the auspices of Time Warner. Therefore, content produced for Patrick’s daily radio program often ends up recontextualized in a Time Warner owned/distributed print publication and vice versa. In other word, content from the Dan Patrick Show is not contained by the borders of the show’s text, but is instead transmitted throughout various Time Warner media holdings, resulting in branded content that become identifiable as Dan Patrick.

While the DP show is intriguing as a media juggernaut and all its platforms, I’d like to focus my interest upon this reflexive notion of “watching production.” Watching the Dan Patrick Show on DirecTV allows a viewer to not only see Patrick interact with his producers, “The Dan-ettes”, as they book guests, update the daily online poll or troll the interactive chat room dubbed the “Locker Room” for interesting comments, but also provides the viewer with an ad hoc education in media production over multiple platforms. Think of it as a backstage musical, with sports talk and webcams.

Because the DP Show is not primarily a “radio show on TV” or a “radio broadcast of a TV show,” it functions as something in between. The DP Show’s custom-made studio space known as “the man cave,” features such masculine hallmarks as a golf simulator, beer keg and wall of supermodel pin-ups. As a further nod to the particularly hyper-masculine nature of the DP Show, everyone carries a nickname and each producer’s manhood is challenged via weekly tests of humiliation such as in-studio dodgeball, free-throw shooting tests and beard-growing trials. Additionally, there is also a running blog for the show and a voluminous chatroom known on the show as the “Locker Room.” Henry Jenkins calls this production strategy a “circulation of media content” that encourages media consumers “to seek out new information and make connections among dispersed media content.”3 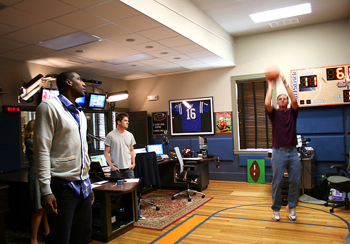 Shooting hoops in the studio

The “sports talk” show has long been a touchstone for mediated sports programming. Until the recent onslaught of media convergence in the sports media industry, the “sports talk” phenomenon was largely relegated to AM radio with localized fiefdoms, such as Jim Rome on the West Coast or Mike and the Mad Dog in the Northeast. When Dan Patrick, one of ESPN’s more famous “talking heads,” left ESPN, he became a central piling for the Chicago-based media branding company, the Content Factory. When Patrick was still with ESPN, his radio shows were simulcast on TV, and looked very much like the shows that ESPN continues to produce.

In this age of convergent media, it seems that the DP Show and its parent distributors have deemed it necessary to produce not only a radio broadcast or TV program for a four-hour time slot, but also that multiple, new media iterations of content must be constructed as well in order for the show to be profitable. While this seems to have a made-to-order level of interactivity for sports fans, it strikes me that this multiple platform/concurrent production model may be synecdochal of the new media landscape; it is not enough to produce one media product, but rather one must produce five or six simultaneously. Again, as Jenkins asserts, media “convergence refers to a process, not an endpoint” and certainly the producers of the multiple streams of media at the DP Show are striving for a process rather than a self-contained singular narrative.4 This type of production is not simply the antiquated practice of simulcasting the audio portion of a TV broadcast on radio, nor is it simply televising the production of a radio broadcast. 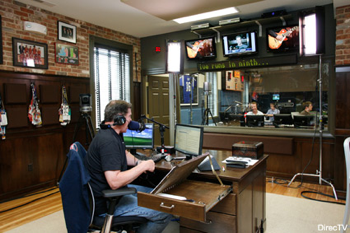 Inside the “man cave”

This trend in “sports talk” radio/TV is not unique to Dan Patrick. Take for instance ESPN’s lineup of “Mike and Mike,” “The Herd with Colin Cowherd” and/or the “Scott Van Pelt Show.” Each of these programs is primarily a radio show with the hosts wearing headsets, speaking to callers and occasionally having in-studio guests, all the while being digitally broadcast to a number of ESPN’s “family” of TV networks. ESPN’s simulcast programs do not burden the viewer with on-set action, as does Dan Patrick and his producers, as viewers watch the DP Show’s production process in real-time. The DP Show seems more an emerging and organic multi-casted product, manufactured with a sensibility toward the “old media” mainstays of radio and TV, but quite literate and adept at new media production without seeming trendy or forced.

Might this multimedia production be the “future” for sports programming, or is it simply a stopgap for sports talk programs to capture the ever-evolving personal technologies that provide an ever-increasing number of ears and eyeballs? Certainly this argument leaves room for expansion with regard to the moving target that is the new media landscape and perhaps sports programming in particular. What seems to be at stake here is some leftover “old media” notion of programming singularity. In previous decades, sports programs focused narrowly upon highlights, game schedules, injury reports and the like. Modern sports programs such as the Dan Patrick Show seem to be striving for a kind of media hybridity that suggests the old ways fall short of the demands of multimedia platforms. The novelty here is that the audience gets to watch the production of multiple media streams as they are generated. Again, it seems that the demands of concurrent production for multimedia content strewn across multiple platforms – be they blogs, podcasts or radio and TV content – make the Dan Patrick Show appear as something “in between” resolute platforms.

Because Patrick and the Dan-ettes are producing not just orthodox and traditional radio/TV programming (i.e., interviews and call-ins) but also are striving for interactivity and user-created content, the “front page” appears thin and not deep. I’m not suggesting here that the DP Show is representative of what critic Nicholas Carr calls “the shallows” when referring to Internet content and how it is consumed.5 I am simply arguing that because Dan Patrick, his producers and the parent distributors have decided to create sports programming content that must span various formats, the content by definition is malleable and takes the form of something in between. Certainly, this trend as growing across the media landscape, but sports programming provides a particularly intriguing and under-reported Petri dish for examination. Of course, mediated sports is ultimately about watching competition. Therefore it makes perfect sense that the Dan Patrick Show and all its various forms let the audience watch the action of production and the resulting “competing” formats.

1. Dan Patrick’s promo pic
2. Shooting hoops in the studio
3. Inside the “man cave”